Close X
Home/The World/24 Hours in Cairo: One of the World’s Oldest Cities 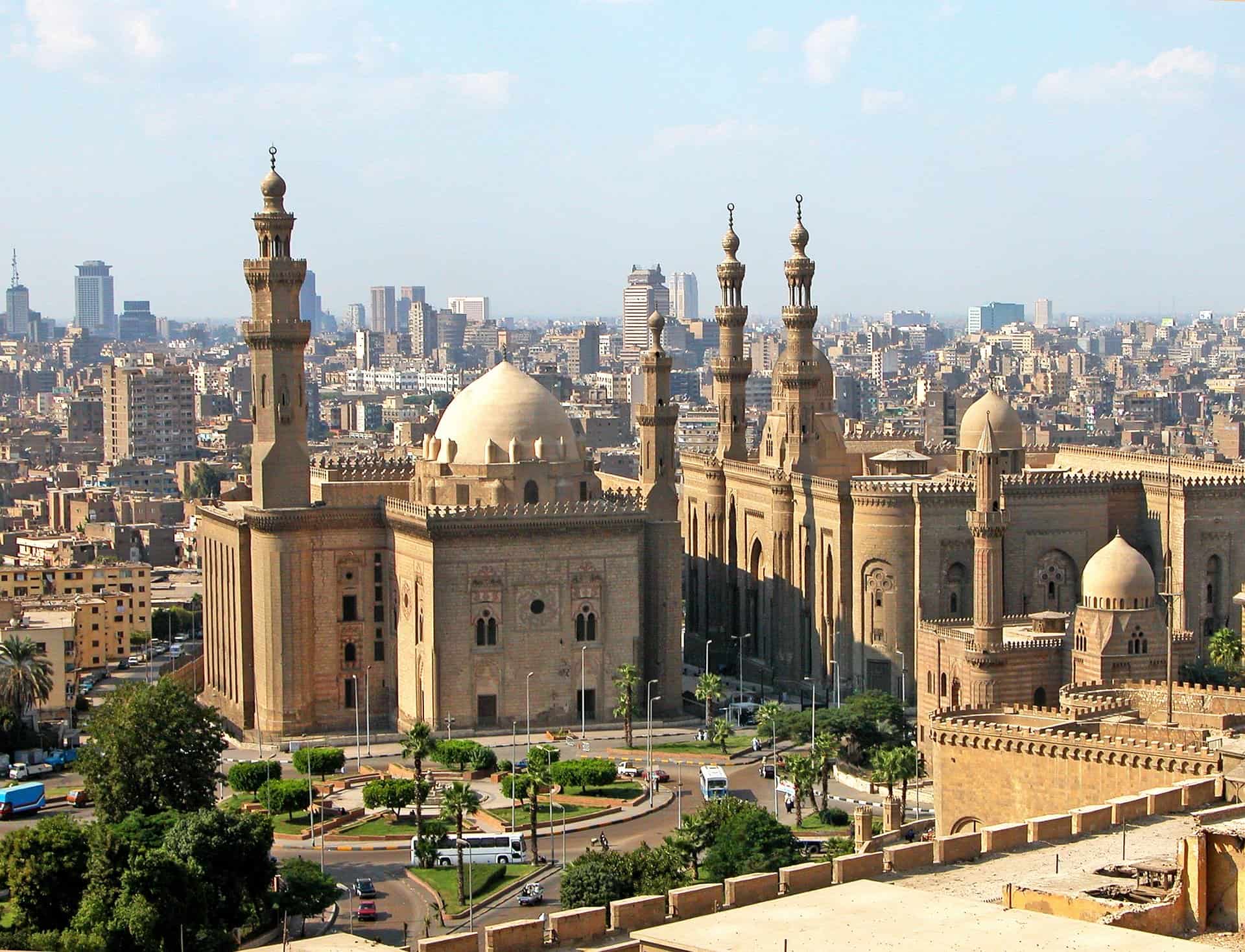 Cairo is the capital of Egypt and is one of the oldest cities in the world, so it might be difficult to navigate it in one day or decide exactly what you want to see. That is why we’ve decided to put together a guide for a short trip to Cairo, to help you from the moment you step foot out of the airport until you’re done exploring. 24 hours in Cairo has never been more exciting.

The Cairo International Airport is located in El Nozha district of Cairo and is a bit far off from the city centre where most of the attractions are. So, to save time, we recommend calling for a taxi, Uber or Careem (another Uber-like service in Egypt) to take you where you want to go.

Breakfast on the Nile

First, food! You must be hungry after your long trip, so head on to the Zamalek district and look for a café with a great view of the Nile for an exquisite breakfast. There is even a floating café called Cafelluca, which is a boat that takes you on a trip down the Nile as you eat!

After you’ve filled up, head on over to Tahrir Square to visit the Egyptian Museum and browse its massive collection of Egyptian, Hellenistic and Roman antiquities. It would be hard to look through the entire museum in a day so, make sure to check out the Royal Mummies Chamber first to glimpse the mummies of ancient pharaohs who once ruled over Egypt, like Amenhotep I, Thutmose I, Thutmose II, Thutmose II, Ramses I, Ramses II, Ramses III, among others. Also, make sure to check out the extensive treasure that once belonged to Tutankhamen along with his golden death mask. All of these antiquities will soon be transported to the new Grand Egyptian Museum in Giza, which is being constructed next to the Pyramids, ahead of its grand opening in late 2020, so make sure to see them before they are taken away for a while!

For those in love with stocking up on souvenirs and knick-knacks that will remind them of their time on their trips, then this section is for you! Khan El Khalili is full of ting shops where locals sell lots of products targeting tourists, like souvenirs, traditional Egyptian outfits, vintage jewellery, paintings and artefacts, so you’ll be sure to find a lot of treasures there. Aside from the shops, there are several coffeehouses and small restaurants throughout Khan El Khalili, the oldest of which is Fishawi’s (1773). You’ll find plenty of traditional restaurants where you can sample Egyptian food for lunch!

Adjacent to Khan El Khalili is Moez Street that is lined with historical buildings that have been preserved to this day, each with its own story and legend. Located in Islamic Cairo, Moez Street is one of the oldest streets in the city. It is named after Al-Mu’izz li-Din Allah, the fourth caliph of the Fatimid dynasty. Among the famous archaeological treasures located along the street are Mosque of Al-Hakim bi Amr Allah, Bayt al-Suhaymi, Mosque of Al-Azhar, Wikala of Al-Ghuri, House of Zaynab Khatun, House of Sitt Wasila, and Mosque of al-Aqmar.

A study conducted by the UN found that Moez Street contains one of the highest numbers of medieval artefacts in one location.

Both streets are pedestrian streets, which is great, so you can walk through them freely without worrying about traffic.

If you’re interested to know more about Egypt’s modern history, then head over to Abdeen Palace which has been transformed into a number of museums displaying belongings of Egypt’s former royal families, including medals, decorations, portraits, weapons and even precious handmade silverware.

The museums are the Silver Museum, the Arms Museum, the Royal Family Museum, and the Presidential Gifts Museum. The Palace is located in the Old Cairo district of Abdeen.

The Manial Palace is a former Ottoman dynasty era palace located in El-Manial district of southern Cairo. The palace is composed of five separate buildings, surrounded by Persian gardens within an extensive English Landscape garden-estate park. It is certainly one of the most beautiful attractions in Cairo.

The Palace was built by Prince Mohammed Ali Tewfik, the uncle of King Farouk, between 1899 and 1929. He had it designed in a style integrating European and traditional Islamic architecture styles. It housed his extensive art collection.

Egyptians who have become entranced with historical Turkish TV dramas, that have become all the rage in the country in the past decade, will find themselves transported back in time to similar surroundings when visiting the Manial Palace.

Also known as the Cairo Citadel, this extraordinary landmark is one of the most popular historical attractions dating back to the 12th century. The Citadel was built by the Ayyubid ruler Salah al-Din to protect the city from the Crusaders. It is located on Mokattam hill near the centre of Cairo and provides visitors with a stunning panoramic view of the entire city thanks to its elevated position.

Within the Citadel, several museums were established in the 1970s, featuring the achievements and victories of the Egyptian Police and Army Forces over the years.

Several mosques lie within the walls of the Citadel as well, the most famous of which is the Muhammad Ali Mosque which was built between 1830 and 1857 and designed by Turkish architect Yusuf Bushnak. Muhammad Ali Pasha, the founder of modern Egypt was buried in a tomb carved from Carrara marble, in the courtyard of the mosque.

The Mosque-Madrassa of Sultan Hassan is a historical mosque and ancient school in the older district of Cairo. It was built between 1356 and 1363 and commissioned by Sultan an-Nasir Hasan. The massive mosque is considered remarkable for its innovative architectural design.

Right next to Sultan Hassan stand Al Refaei Mosque, another massive example of Islamic architecture. It is actually the Khedival Mausoleum of the Royal Family of Muhammad Ali Pasha. The building dates back to around 1361. The mosque is the resting place of members of Egypt’s royal family, including Hoshiyar Qadin and her son Isma’il Pasha, as well as Sultan Hussein Kamel, King Fuad I, and King Farouk.

If you’ve still got time after this extensive tour, then you should definitely watch the sunset from the top of the Cairo Tower. Standing at 187 meters, the Cairo Tower was the tallest structure in Egypt and North Africa for about 50 years until 1971, when it was surpassed by Hillbrow Tower in South Africa.

It is located in the Gezira district on Gezira Island in the River Nile, close to downtown Cairo. The Cairo Tower was built from 1954 to 1961 and designed by the Egyptian architect Naoum Shebib. Its design is inspired by the shape of the pharaonic lotus plant, an iconic symbol of Ancient Egypt. The tower is crowned by a circular observation deck and a rotating restaurant with a panoramic view over the entire city of Cairo. One rotation takes around 70 minutes. You should definitely check that restaurant out, but be sure to make a reservation in advance just in case it is overbooked!

Sound and Light Show at the Pyramids

You didn’t think we’d forgotten about the timeless Pyramids of Giza did you? Of course not! We just thought we’d save the best for last. How about before heading back to the airport or your next destination, wherever it may be, you catch a Sound and Light Show at the Pyramids at night?

The Pyramids are a majestic attraction to say the least, but add to that the fascinating sounds and lights that transport you back in time to the age of pharaohs and ancient Egyptians…now that is a show that cannot be missed. Instead of visiting the pyramids of Giza in the sweltering hot weather, wouldn’t it be better to see them when it’s much cooler at night? Most definitely, especially when there is a sound and light show going on that celebrates the magnificence of these pyramids for one hour as the Sphinx tells you the story and the history of this legendary place. Prior reservation is required for this event so make sure to book your tickets in advance – a fantastic end to 24 hours in Cairo.