Close X
Home/Eastern Mediterranean Region/Mohamed Ali Palace in Manial: Home of the King Who Never Was

Mohamed Ali Palace in Manial: Home of the King Who Never Was 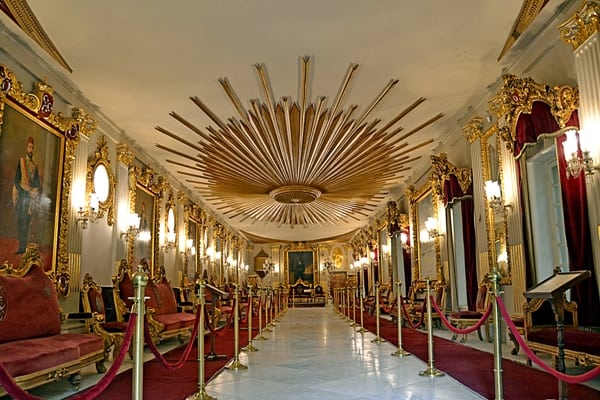 The Museum and Palace of Prince Mohamed Ali Manial is one of the most stunning and unique historical museums in Egypt. It dates back to the Alawiyya dynasty era, the era during which the descendants of Muhammad Ali Pasha (a different Muhammad Ali) ruled Egypt.

The Palace can be found in the Manial district of southern Cairo, Egypt. The palace and estate have been beautifully preserved over the years, maintaining their original luster and magnificence.

History of the Palace

Prince Mohamed Ali Tewfik was born on 9 November 1875 in Cairo as the second son of Khedive Tewfik, the grandson of Khedive Ismail, and brother of Khedive Abbas Abbas Hilmi II. He grew up with a love for science, so he attended the secondary school in Abdeen and then traveled to Europe to obtain a higher degree in science at the Hyksos High School in Switzerland, followed by the Terzianum School in Austria. At his father’s request, he focused his studies on military science. He returned to Egypt after his father’s death in 1892. Throughout his life, he was known to be a wise man who loved literature, arts, and science, and had a thirst for knowledge. This certainly explains how he was able to build such a magnificent Palace.

Design of the Palace

The overall design of the palace reflects the lifestyle of the late 19th- and early 20th-century Egyptian royal prince and heir apparent. It is built on an area of 61711 m². One the entrance, before you enter, is an inscription that reads “This palace was built by Prince Mohammad Ali Pasha, son of Khedive Mohammed Tewfik, may God rest his soul, to revive and pay homage to Islamic arts. The construction and decorations were designed by His Highness and they were implemented by Mo’alem Mohamed Afifi in 1248 AH.”

The compound consists of five separate and distinctively styled buildings representing three main purposes: residence palaces, reception palaces, and throne palaces, surrounded by Persian gardens, all encased within an outer wall resembling medieval forts. The buildings include a reception hall, clock tower, the Sabil, the mosque, the hunting museum, which was recently added in 1963.

The residence palace was the first to be established in 1903. There is also the throne palace, the private museum, and the golden hall, in addition to the garden surrounding the palace.

The Reception Palace is the first thing you see as you enter the palace. Its grand halls decorated lavishly with tiles, chandeliers, and carved ceilings were designed for receiving prestigious guests, such as famous French composer Camille Saint-Saëns who performed private concerts and composed some of his music at the Palace, including Piano Concerto no. 5 titled “The Egyptian”. The Reception Hall contains rare antiques, including carpets, furniture, and decorated Arab tables. It is said that the Prince had a team tasked with searching for rare artifacts and bringing them to him to display them in his palace and museum.

The palace consists of two floors. The first contains the honor room to receive statesmen and ambassadors, and the reception hall for senior worshipers to sit with the Prince before the Friday prayers every week, and the upper includes two large halls, one of which is designed in the Moroccan style, where its walls were covered with mirrors and faience tiles, while the other hall was designed in the Levantine style, where the walls are covered with wood with colorful geometric and floral motifs with Quranic writings and verses of poetry.

The Residential Palace is equally impressive, and one of the most exquisite pieces there is a bed made out of 850 Kgs of pure silver that belonged to the Prince’s mother. This is the main palace and the first building to be built. It consists of two floors connected by a ladder. The first floor includes the fountain foyer, the haramlik, the mirror room, the blue salon room, the seashell salon room, the Shekma, the dining room, the fireplace room, and the Prince’s office and library. The most interesting room is perhaps the Blue Salon with its leather sofas braced against the walls decorated with blue faience tiles and Orientalist oil paintings.

After that, there is the Throne Palace which is quite stunning to behold. It consists of two floors, the lower is called the Throne Hall, its ceiling is covered with a sun disk with golden rays reaching out to the four corners of the room. The sofa and chairs are covered with velor, and the room is lined with large pictures of some of the rulers of Egypt from the family of Mohamed Ali, as well as with paintings of landscapes from around Egypt. This is where the Prince received his guests on certain occasions, such as holidays. The upper floor consists of two halls for the winter season, and a rare room called the Aubusson Chamber because all its walls are covered with the texture of the French Aubusson. It is dedicated to the collection of Ilhami Pasha, the maternal grandfather of Prince Mohamed Ali.

Another great room is the Golden Hall, named as such because the decorations of all its walls and ceiling are in gold, which was used for official celebrations, despite being devoid of antiques. Perhaps this is explained by the fact that its walls and ceiling are covered with carved gilded floral and geometric motifs. Prince Mohamed Ali actually moved this hall from the house of his grandfather, Ilhami Pasha, who originally built it to receive Sultan Abdul Majid I, who attended to honor Ilhami Pasha on the occasion of his victory against the Russian Empire in the Crimean War.

The mosque attached to the Palace has a rococo-inspired ceiling and a mihrab (niche) decorated with blue ceramic tiles, and to the right, there is a small minbar (pulpit) decorated with gilded ornaments. The ceramic work was created by the Armenian ceramist David Ohannessian, originally from Kutahya. The mosque has two iwans, the eastern iwan ceiling is in the form of small yellow glass domes, while the western iwan is decorated with sunbeam decorations.

A Clock Tower is located within the Palace lies between the Reception Hall and the Mosque. It integrates the styles of Andalusian and Moroccan towers that were used to observe and send messages by fire at night and smoke during the day, and attached to it is a clock placed at the top and its hands are in the form of two snakes. The bottom of the tower features Quranic scriptures just like many other parts of the Palace.

A Grand Royal Palace: Then and Now

During the royal era, Prince Mohamed Ali held many parties and meetings there for the country’s top pashas and ministers, dignitaries, writers, and journalists. The Prince asked that the Palace be transformed into a museum after his death.

After the 1952 revolution the properties of the descendants of Mohamed Ali Pasha were seized, and the palace was transformed into a museum and the public was finally allowed to see for themselves the grandeur in which the royal families lived.

In 2020, the Palace reached its 117th anniversary, and to celebrate this momentous event, an art exhibition showcasing several oil paintings was held in the main hall of the Palace, detailing how the palace was built over the course of 40 years.

The Manial Palace is now a public art and history museum. It houses his extensive art collections, antique furniture, clothing, silver, medieval manuscripts, and oil paintings of some members of the family of Mohamed Ali Pasha, landscape paintings, crystals, and candlesticks, all of which were given to the Egyptian Supreme Council of Antiquities in 1955.

The Museum can be found on the south side of the Palace and consists of fifteen halls in the middle of a courtyard with a small garden.

You can also find a Hunting Museum that belonged to the late King Farouk. It was added in 1963 and displays 1180 objects, including animals, birds, and mummified butterflies from the hunting collections of King Farouk, Prince Mohamed Ali, and Prince Yusef Kamal, in addition to the skeletons of camels and horses that were part of the annual sacred caravan to transfer the kiswa to the Kaaba in Mecca.

The gardens surrounding the palace cover an area of ​​34 thousand meters and include rare trees and plants collected by Prince Mohamed Ali from all over the world, including the cacti, Indian fig-trees, and types of palm trees such as the royal palm, and bamboo trees.

Visitors can view these historical gardens and nature parks with their rare tropical plants collected by the Prince himself. It is said that the Prince and his head gardener traveled around the world in search of one-of-a-kind flowers and trees to enrich the palace gardens. His favorite find was said to be the cacti he acquired from Mexico.

The King Who Never Was

Prince Mohamed Ali was notoriously known as the ‘King Who Never Was’ due to the fact that he served as crown prince three times.

The first time he became crown prince was during the reign of his brother Khedive Abbas Hilmi II but even after the deposition of Abbas Hilmi II, the British authorities asked Prince Mohamed Ali to leave Egypt, so he moved to Monterrey, Switzerland until Sultan Ahmed Fuad I agreed to have him return to Egypt, where he was appointed as crown prince again for the second time until the Sultan had his son Prince Farouk, then he was chosen as one of the three guardians of the throne after the death Ahmed Fouad I until his son Farouk became of age and during that time he even represented Egypt at the Coronation of King George VI of the United Kingdom.

He became a crown prince for the third during the reign of King Farouk until the king eventually had a son, Prince Ahmed Fouad II.

Prince Mohamed Ali actually had another chance to be a crown prince when King Farouk was deposed in 1952 and his son was still an infant. They declared the infant son king with Prince Mohammed Ali as Head of the Regency Council as well, but this situation only lasted a few days at the most.

It is said that Prince Mohamed Ali created this palace and specifically the Throne Room to prepare for his would-be role as King, should the throne ever fall into his hands. However, it was not to be.

Tickets are EGP 100 EGP and EGP 50 for students. Be sure to ask for photography regulations, as some museums might not allow any kind of photography to preserve the antiquities and these regulations tend to change from time to time.

Mohamed Ali Palace: A Stunning Way To Learn About the Past

The Palace and Museum of Prince Mohamed Ali in Manial is a rare gem and magnificent example of the intermingling of cultures and architectural styles in one building and it also reflects the great talent of its designer, Prince Mohamed Ali himself. Every corner of the Palace was well utilized to reflect the luxury and culture of the time in which it was built.

Visiting this Palace would be a truly enjoyable experience and a chance to explore and learn more about what the Egyptian Royal Family was like at the time.