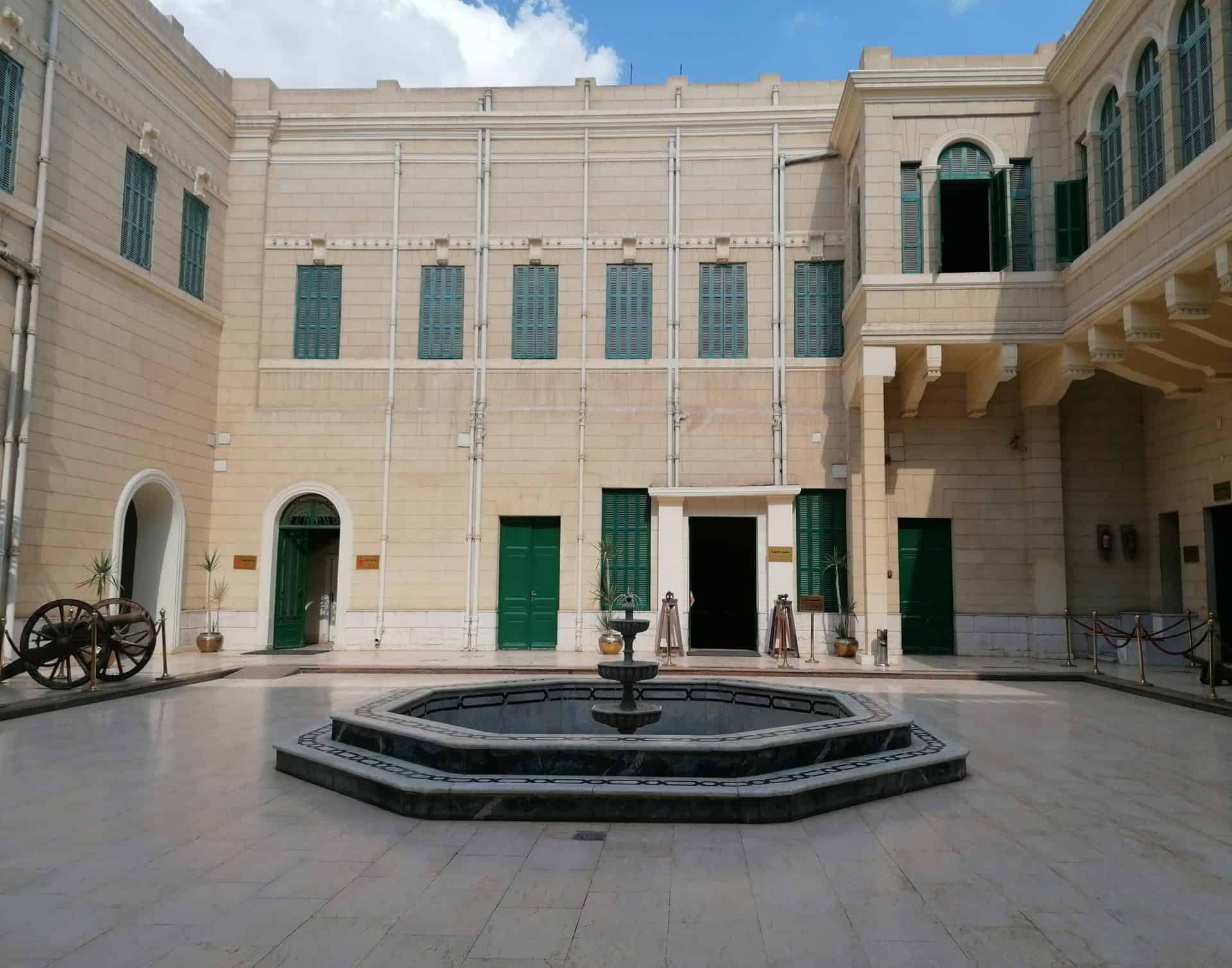 Egypt’s former Royal Family left behind quite the legacy, including many palaces and gardens that used to be their sole property and are now open to the public to catch a glimpse of how royalty lived in Egypt until the mid-twentieth century.

Abdeen Palace is one of the most enchanting places in Egypt. Located in the neighborhood of Abdeen in Cairo, the palace tells the tale of generations of the descendants of Mohammad Ali, the founder of Modern Egypt.

Khedive Ismail contributed to shaping the way Cairo appears today. It was during his reign that many of the palaces, buildings, universities, and even railway stations were built as Egypt was the second country in the world to establish a railway system, after Britain. He made great achievements, not the least of which is this sprawling palace.

To build this palace, Khedive Ismail purchased 25 acres of land and the small villa that was built on it from the widow of a Turkish prince and military leader called Abdeen Bey who lived on the property. His widow’s only request was the palace be named after him, and the Khedive fulfilled her request.

How to Build a Palace

Abdeen Palace was commissioned by Khedive Ismail soon after he ascended to the throne and it took a total of 10 years to build. It was designed by Egyptian, Italian, French, and Turkish architects, so it incorporates  many different elements that fit together harmoniously. The palace’s garden was added later on in 1921 by King Fuad I on an area of 20 acres.

In 1872, Khedive Ismail moved into the palace with its 550 rooms, most of which are decorated with pure gold. Abdeen palace combines different interior design styles, from Baroque to Rococo, Islamic and eclectic. Every room must be more than worth exploring, with its colored marble floors and alabaster decorations. The ceilings of the palace are equally stunning with delicate gilded ornamental motifs of Islamic and European influences expressing absolute luxury. The walls of the palace are also decked with rare European and Asian paintings, which were collected by Egypt’s royals over the years.

As you arrive at the gate of the palace and walk into the arched entrance, look up and you’ll find iron railings that are said to have been built so that women could shower Princess Eugenie, wife of Napoleon III, with roses as she walked into the palace. The gate was named after the city in which it was carved, Paris, to welcome the foreign princess on her visit to Egypt to attend the opening of the Suez Canal. In the center of the entrance area, as you continue to look up, you’ll find a hard-to-miss chandelier with 22,000 crystals.

Next to the Paris gate, you’ll find the Al-Fath Mosque, which used to be much smaller when it was built in the 19th century in an Ottoman style, resembling the mosque of Mohammed Ali in the Citadel, but it was expanded to what it is like today by King Fuad. The mosque was fitted with a beautiful large wrought copper chandelier, and the wall and ceiling decorations are superb, as well as the colored marble floors. The mosque has two doors, one for the general public, and one that the King used to enter from.

As you walk forward, you’ll come across the Tea Kiosk, a separate open building. Added by King Fuad, the Tea Kiosk was built in 1921. This is  where King Farouk, the last King of Egypt who ruled from 1936 to 1952, used to drink his tea while looking out onto the whole garden of the palace.

To your left, you’ll be amazed by the majestic music kiosk, although the word kiosk seems to be a very paltry description of this exquisitely carved marble pavilion. Here, the royal family used to watch musical performances played by the orchestra. It is also said that an orchestra played music every morning to wake the young Prince Farouk.

In front of the music kiosk, you’ll find a swimming pool that was added by King Farouk.

Next, you get to take in the stunning façade of the Abdeen Palace itself. While the outer façade, outside the palace’s walls, looks truly majestic, the inner façade looks equally enchanting. Designed in the Neoclassical style, the massive scale of the building captures the eye and forces you to admire what an impressive feat of construction it truly is.

Take a look around the gardens where several cannons and large military weapons are strategically put on display outside.

You can also soak up the view by sitting at one of the benches as you sip your drink at the small cafeteria.

Next, you can start your journey through the Abdeen Palace Museums, but don’t forget to step into the open courtyard with a marble fountain in the middle surrounded by several ancient weapons and busts of Egyptian kings and monarchs. There, you’ll also find the entrance to the Sidi Badran Mausoleum.

The shrine belongs to one of the pious worshippers in Islam that King Farouk renovated with the palace. Due to Sidi Badran’s piousness, no one could dare move his mausoleum elsewhere, either during construction or renovations of the palace.

Like any palace in Egypt, it is divided into a Selamlik and Haramlik, the former mostly for the men where they conducted business and met foreign dignitaries, and the latter for women to receive their own guests and spend time with their families.

The garden of the Haramlik area at Abdeen Palace is also a must-see, with mosaic pathways, carved iron benches, and patches of grass, it adds a cozy atmosphere to the area where the Princesses of the royal family used to spend their days.

The garden is surrounded by buildings, the center of which was where Queen Nazli, wife of King Fuad and mother to King Farouk, overlooked the gardens. There are three balconies, one belongs to her bedroom, one to the bathroom, and one to her living room or sitting area.

While the palace itself is locked down for preservation purposes, there are six museums that are open to the public, showcasing hundreds, if not thousands of artifacts, acquisitions, and holdings that belonged to the royal family.

While the upper floors of the palace, including the royal bedrooms and living quarters, are reserved for visiting foreign dignitaries, the lower floors contain several museums for the public to enjoy, such as the Silver Museum, the Arms Museum, the Presidential Gifts Museum, and the Historical Documents Museum.

The Historical Documents Museum includes numerous documents and royal correspondence, the most important of which is the Imperial Ottoman decree that established the rule of Muhammad Ali and his family, from which Khedive Ismail descended. It also displays the marriage and divorce certificates of King Farouk and Queen Farida.

The Arms Museum showcases all the weapons, ancient and modern, and hunting gear that were owned by the royal family members, as well as the medals and orders of merit bestowed on members of Egypt’s royal family and eminent Egyptian figures, including a diamond-encrusted sword gifted to King Farouk, on the occasion of his marriage to Queen Farida, by King George VI, father of the current Queen Elizabeth II of Britain.

Many of the collectibles and artifacts in this particular museum were bought by King Farouk from auctions around the world due to his interest in history and antiquities, including a gun that belonged to Mussolini and a jewel-encrusted sword that belonged to Peter I of Russia that was on display at an auction in London in 1949 and King Farouk bought it for 11,000 Sterling Pounds and it is now insured to ensure its safety.

One of the curious objects on display in this museum is a safe box made of wood. The safe has two keys, one real and one fake, and if someone attempts to open it without having the proper key, four little square openings pop open revealing guns that fire on the intruder, then releases an alarm as well. The box was made in the 1700s in France.

The Silver Museum’s lighting is appropriately dimmed down to allow its displayed objects to truly shine. From gilded silver plates and shimmering glass sets that belonged to Khedive Abbas Helmi II, Khedive Ismail, and others, you can take your time to take in these luxurious items that once belonged to the royal family and admire their different exquisite designs and materials. One of the most exquisite items in the Silver Museum is a 50 kg fruit plate holder sculpture made in Prussia in the 19th century. The Silver Museum also has on display a huge silver platter that weighs 105 Kg.

The Presidential Gifts Museum showcases the gifts received by Egyptian presidents from different countries, so its collection is continually renewed, and it’s an impressive collection, to say the least.

We strongly recommend that everyone who steps foot in Cairo visit this extraordinary palace with all its treasures and its rich history of a family that ruled Egypt for over a century. There may be no shortage of palaces in Cairo, and indeed all of Egypt, but Abdeen Palace definitely ranks as one of the best, if not the best, in the country and indeed in the region. It’s no small feat that so much of the collections on display at the Abdeen Palace Museums are so well preserved, no matter how ancient they may be.