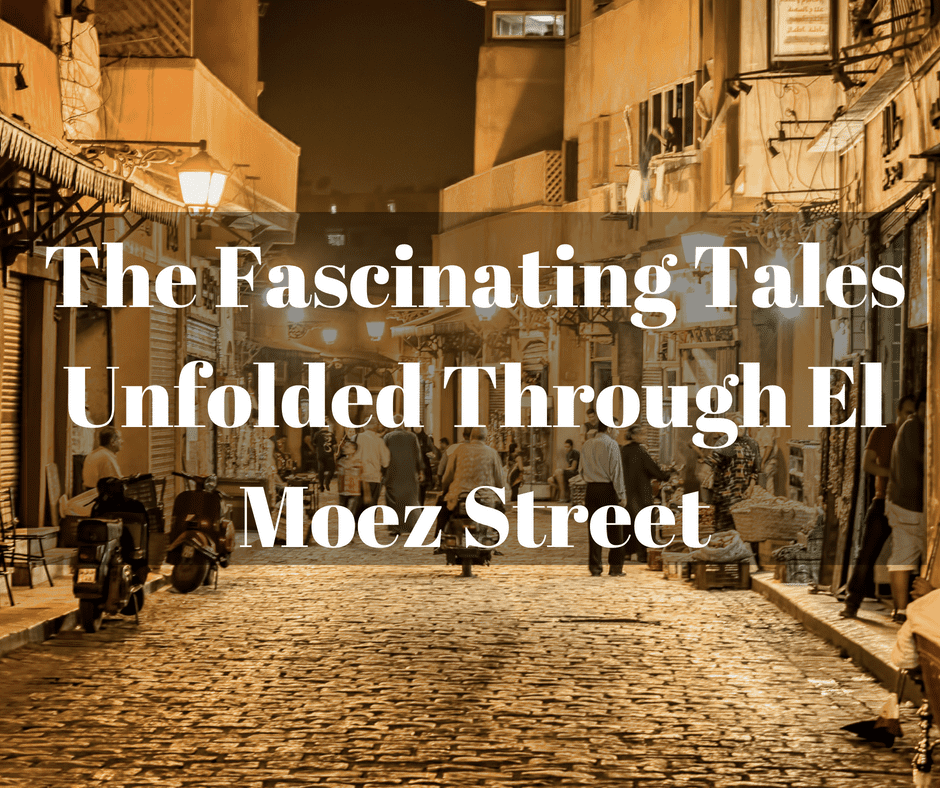 Interestingly, Cairo is one of the countries around the world that possesses more than a few landmarks. There is a lot that you can behold around the streets of Cairo. Besides, there are streets that are beyond being ordinary, especially those that hold multiple historical stories.

Most of the tourists automatically think of downtown and Khan Al Khalili. Although they are quite popular, there is also El Moez Street; an amazingly fascinating street that not everyone is aware of its existence.

El Moez Street is an abbreviation for its fairly long name; Al Moez Lidin Allah Al Fatimi. The street holds lots of historical buildings, for it’s one of Egypt’s oldest streets. It had witnessed lots of incidents since the old of time. You will always find something interesting to hear about along your tour around this mesmerising street.

A BRIEF ABOUT EL MOEZ STREET

El Moez Street lies in one of Cairo’s oldest districts. It is the Islamic District of Cairo; this area is also where Khan Al Khalili exists. The length of the street reaches almost one kilometre long.

The street starts from Bab Al-Futuh from the northern part while Bab Zuweila starts from the southern part. What also makes this street interesting is the fact that it is an open-air museum.

Back in 1997, the government decided to renovate the whole place. They included everything in their renovations from the historical buildings as well as the modern to even the pavements. That changed the whole street into an outdoor museum.

Thankfully, the street has become a zone for pedestrians only since 2008. However, that is between 8 AM and 11 PM. Outside these hours, cargo traffic takes over.

Well, since there are a lot of historic buildings to witness in that street, gratefully, there are two sections of this street. The northern part of El Moez Street starts from Al-Hakim Mosque and extends out to Al Azhar Street where the Spice Market lies.

This part also includes Al Aqmar Mosque, the section of the antique market, the Qalawun complex, alongside other medieval mansions.

On the other hand, the southern part starts out from the Ghuriya complex and extends to the Bab Zuweila. This part also embraces a popular place, the Gamaliya district; it is where the glorious Tent Market exists.

Well, for those who are unaware of this fact, El Moez is actually an Arabic name. In that case, you will surely wonder who that guy was. We are here to unfold the little mystery. His real name was Abu Tamim Maad El Moez LeDin Allah, but the name was too long for a street, so people call it El Moez Street.

However, the last name, Al Fatimi, was not the guy’s last name. It was actually a description that meant he belonged to the Fatimid Caliphate.

‘Glorifier of the religion of God’ was the name that always people described El Moez by. He was the fourth caliph of the Fatimid dynasty and the 14th Ismaili Imam. His reign began in 953 and lasted for 22 years.

The power of the Arab Fatimid Dynasty was quite dominant during his reign. Besides, he was the one to move to the centre of the dynasty from North Africa to Egypt. The Fatimid dynasty was the duration where the city of Cairo came into being. Cairo was actually the new capital of the Fatimid caliphate.

During El Moez’s reign, people had always known him for his amazing acceptance of other religions. El Moez was a Shia Muslim; however, he was quite famous among the Christian and the Jewish communities. Above and beyond, he was the one who ordered the invention of the first fountain pen. The fountain pen was actually a pen that did not stain either the hands or the clothes.

Upon deciding to visit the historical El Moez Street, you will have another surprise if you are a history guru. El Moez Street is not the only area that possesses lots of historical buildings, but also the surrounding area contains many buildings that date back to the era of Amr Ibn El A’as and all the way to the Fatimid, Ayyubid, Ottoman, and even Muhammed Ali Pasha’s reign. Shortly, we will provide you with the history of some of the buildings you are going to find on El Moez Street.

Al-Hakim was actually the Sixth caliph of the Fatimid dynasty and the 16th Ismaili Imam. His nickname was Al Anwar; which means the Illuminated in English. The mosque was named after him.

It was built originally as an addition to the Fatimid vizier, Gawhar Al Siqilli. However, the mosque became an extension of the fortifications that Badr Al Jamali built. This mosque consists of an uneven rectangle that contains four walkways. These paths surround a courtyard. This mosque also exists in the same area where a lot of historical buildings do, the Islamic district. The mosque lies at the northern gate.

The mosque possesses several amazing features. The most spectacular one is the minaret. It actually has two minarets; one on each side of the façade. These minarets have survived a very long time; they also have undergone lots of renovations throughout history.

At the beginning of their construction, the two minarets stood independently at the corners. The structure of the building got stronger after the addition of the immense outstanding complex. The wall of the mosque effortlessly received the combination of the northern minaret into it, resulting in a strong complex.

The Beginning of its Structure

Saladin was the first to use this building. He captured the crusaders and prisoned them in there. However, after some time, the building became useless and that probably was what encouraged Al-Hakim to convert it into a place of worship.

Wikala is the Arabic word equivalent to Inn. Sultan Ashraf Abu Al Nasr Qaitbay was the one who built the building in 1481 CE. It lies in the district of Islamic Cairo as well. Bab Al Nasr Street is the precise location of this inn. Besides, it is the second building that Sultan Qaitbay built during the period of his reign. The other wikala was actually Sabil Kuttab Wikala and it exists at the southern part of El Moez Street.

The people of Cairo were actually the real inhabitants of the Wikala; however, the place lost great parts of its decoration and architectural structures. It became abandoned by time. On the other hand, that does not change the fact that this building is actually one of the fascinating products of Islamic architecture.

Bayt is the Arabic equivalent of House. The building means the House of Suhaymi. It has been around since the Ottoman era. Abdel Wahab El Tablawy built the house museum in Cairo in 1648. Tablawy also built Darb Al Asfar, which was a very prestigious part of Medieval Cairo.

However, the name of the museum changed, for Sheikh Ahmed Al Suhaymi bought it in 1796 and his family owned the place for many generations. Once Sheikh Ahmed bought it, he started extending the house greatly; he did so by combining the structure of the place with the old surrounding houses.

The house lies in the centre where there is a small garden full of flora and beautiful palm trees. The place is now a tourist attraction and it is open to the public.

The literal meaning of this mosque’s name, Al Aqmar, is moonlit. Sometimes, people refer to it as the Gray Mosque as well. Like most of the surrounding area, the mosque has been around since the dynasty of the Fatimids in the northern part of Al Moez Street. Al Ma’moun Al Batahi was the one who built it during the caliphate of Imam Al-Amir Bi Ahkami.

The façade of the mosque is famous for being very noticeable. Geometric carving and inscriptions fill the decoration of the façade, for that reason, it became very popular. Above and beyond, Cairo has never witnessed a mosque with such decoration before Al Aqmar Mosque introduced that idea.

The complex of Qalawun is a massive structure that El Moez Street holds among its exceptional buildings a well. The building contains a hospital and a tomb. Sultan Al Nasir Muhammed Ibn Qalawun built it in 1280.

During his time, around thirty other mosques came into life, too. This complex existed right after the Fatimid Palace turned into ashes and ruins. Throughout the years, more than a few people bought the building until Sultan Qalawun bought it in 1283 AD. The complex held his name ever since.

The Qalawun complex is another structure that exists in El Moez Street. The place has been the centre of religious ceremonies and other important Islamic rituals. The structure has undergone many restorations during the reign of Al Nasir Muhammed, the Son of Sultan Qalawun.

In 1154, the building of Al Hussein Mosque took place. The name of the mosque usually follows the word Sayedna, which means our master. The mosque lies near the popular bazaar, Khan Al Khalili.

It is another holy site among the Islamic sites that exist in Egypt. Below the mosque lies a cemetery where the caliphs of the Fatimid were buried. However, the latter was only discovered after the archaeological excavation of the site.

Al Hussein was actually the grandson of Prophet Muhammed. However, some Muslims believed that the head of Al Hussein has been somewhere under the mosque.

Despite all of the buildings mentioned in the articles, there are much more and they are all quite interesting, too. El Moez Street possesses multiple buildings that will always keep you busy learning about the Islamic history of Egypt. It is a place where there is no room for boredom.

Have you ever visited El Moez street in Egypt? What was your favourite building? Let us know in the comments below.

Delving into the Secrets of Khan Al Khalili

Cairo Tower: A Fascinating Way to See Egypt From A Different View - 5 Facts and More