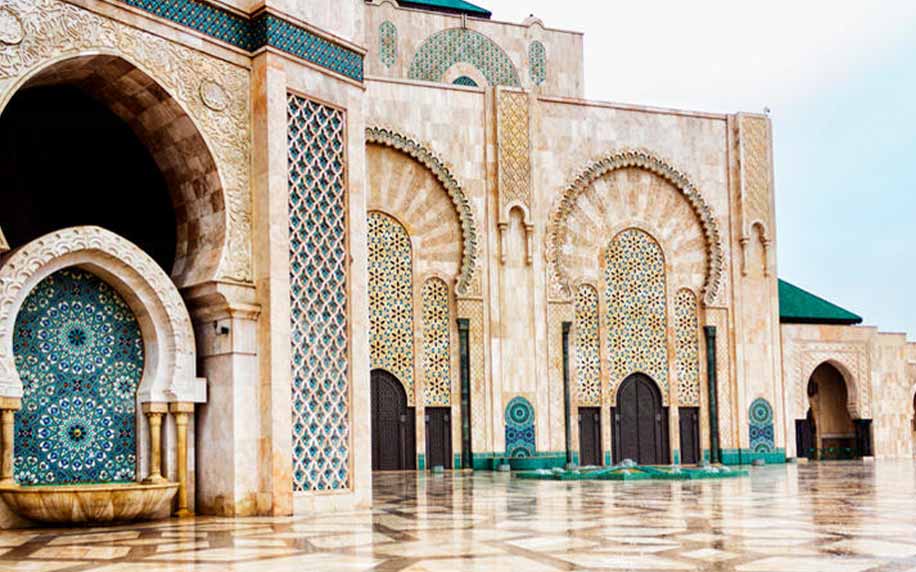 Casablanca is a huge city: it is the largest in Morocco, the largest in Northwest Africa (otherwise known as the Maghreb region), and the eighth largest in the Arab world. It has a population of over 3.7 million, is a major port, and is considered to the business and economic heart of Morocco, as well as of Africa’s largest financial hubs. While its key aesthetics and culture remain richly Arab, Casablanca has also been influenced by the countries who invaded and ruled it in centuries past, including Spain and France, and it has also been heavily influenced by its position of asymmetrical neutrality during World War II.

The Hassan II Mosque is the seventh-largest mosque in the world and the largest functioning mosque in Africa. Its minaret – a type of tower built-in or adjacent to a mosque, designed to be a visual focal point and used for the adhan, the Muslim calling to prayer – is the world’s second-largest, standing at a 689 ft. It is one of only two mosques in the country open to non-Muslims, and its interior can fit up to 25,000 worshippers, with exterior courtyards providing space for up to 80,000.

A relatively new addition to Casablanca, the Hassan II Mosque was designed by French architect Michel Pinseau, guided by King Hassan II, and built by Moroccan artisans who travelled from all over the kingdom. Its position by the sea was inspired by Pinseau’s recollection of a verse of the Qur’an: “the throne of Allah was built on water”.

The Norte-Dame de Lourdes Church is a Catholic church in Casablanca’s city centre. An impressive and imposing concrete structure, the church was completed in 1958 and its design was heavily influenced by Western modernism, making it stand out among the city’s more historical buildings. The church’s most famous elements are its unusual elongated concrete entrance and beautiful stained-glass windows, acting as walls in some parts of the church, designed by notable French artist Gabriel Loire whose impressionist, medieval-inspired work are featured in venues around the world.

Although a predominantly Muslim city, Casablanca welcomes visitors and residents of all denominations. During the First World War, the French Christian residents of Casablanca were worried about their sons, most of whom had been drafted into the war and were serving in the trenches. Unable to make religious pilgrimages to Lourdes due to the German warships patrolling the African waters, these Christians needed somewhere to worship one of their religions most sacred icons, the Virgin Mary, and so they built a sanctuary outside Casablanca where they could pray for their sons’ souls.

By the 1920s Casablanca’s Christian community had formed a church underground, beneath a home built for Franciscan priests. As more and more Catholics immigrated to Morocco and the Franciscan priests provided a rich culture of Catholicism for them, the church grew, and a more suitable establishment was built.

The Norte-Dame de Lourdes Church not only provided Casablanca’s Catholic community with a place to worship, but it also became a cultural sanctuary to many Moroccan children in the city with the inclusion of a cinema, where they could watch French films. To this day, the church remains an integral part of Casablanca’s community.

Located near Mohammed V Square – a historically significant square established in 1916, at the beginning of the French colonization of Morocco – Casablanca’s Central Marketplace was constructed in 1917. It is a key part of the early 20th-century European ville nouvelle movement, referring to new cities or towns being built on sites with little to no previous settlements.

The Central Marketplace stands atop space where the 1915 Casablanca Fair was held and was designed by Pierre Bousquet, an architect who came to prominence in Casablanca through his beautiful Moroccan style residential buildings in the 1930s. The marketplace’s style is Neo-Mauresque, or Moorish Revival, embracing the west’s mid-19th century obsession with romanticizing oriental cultures. Moorish style typically blends various styles from the Arab world, including North African Berber, classical pre-Islamic Iberia (Roman, Byzantine, and Visigothic), and contemporary styles of the Middle East. The marketplace itself features a large gateway reminiscent famous gateways of Morocco colonial cities: the Marrakesh, Fes, Rabat, and Meknes.

The Central Marketplace offers fresh produce, particularly typical seafood and more unusual variants like oysters and shark meat, floral arrangement in handwoven baskets, native herbs and spices, and fossils and antiques. There are also many restaurants that offer local cuisine.

One of Casablanca’s most famous and recent attractions is Rick’s Café, a restaurant, bar, and café modelled after the bar featured in Michael Curtiz’s classic Hollywood film Casablanca (1942), starring Humphrey Bogart and Ingrid Bergmann. A crucial setting within the film, the bar acts as a sanctuary of political and religious neutrality during the Second World War, and it brought the beauty and culture of Casablanca to Western audiences. Casablanca remains one of the most popular films of all time.

Rick’s Café is set in the courtyard (known as a raid) of an old mansion and its piano bar incorporates many features famous in the film, including “curved arches, a sculpted bar, balconies, balustrades as well as beaded and stencilled brass lighting and plants that cast luminous shadows on white walls”. The idea was developed by American diplomat Kathy Kriger, who spent many years in Morocco. Careful consideration was taken during the renovation of the building, ensuring as many features as possible resembled Rick’s café from the film.

Their menu is mostly fresh Moroccan seafood, with steaks and various cheeses on offer. Local fruit it also popular. The piano bar is active most nights and often plays music popular with American tourists, including Blue Moon, The Lady is a Tramp, and the famous As Time Goes By from Casablanca, a beautiful summation of culture during the War and of Rick’s relationship with Ilsa.

The Royal Palace of Casablanca is described as a “masterpiece of Islamic architecture”. Surrounded by intricate water features and magnificent orange groves, the Royal Palace serves as the home of Moroccan royalty and has hosted numerous significant royal receptions and events, including Pope John Paul II in 1985. Located in the Habous district of the city’s New Medina, it was built in the 1930s during the French colonization of Casablanca, and therefore is a structure composed uniquely combination of French and classic Moroccan architecture. One of its most prominent features is its use of geometric designs in bronze, showcased throughout the exterior of the palace.

Morocco has various royal buildings throughout the country, but the Royal Palace is current King Mohammed VI’s second favourite, who spends most of his time in the political capital of Rabat. When staying in Casablanca, the Royal Palace functions as his abode.

The Moroccan Jewish Museum, established in Casablanca in 1997, is the only museum in the Arab world dedicated to Judaism. Before it was a museum the building, which was removed in 2013, was a Jewish orphanage for almost fifty years. Wishing to commemorate and celebrate Morocco’s Jewish heritage, the museum was founded by a former professor at the University of Rabat and founder of the Foundation for the Preservation of Moroccan Jewish Culture, Simon Levy. It is currently curated by Zhor Rehihil.

Judaism in Africa dates back to the 2nd century, with more Jews settled in Africa during the 7th and 8th centuries, but it was not until the 15th century that Judaism took hold in Morocco. An edict banning Jews from Spain and Portugal forced Jewish refugees to flee to neighbouring Africa, and cities such as Casablanca, Fez, and Marrakech became their homes. Although the conflict was inevitable, the Jewish community lived in relative peace with the native Muslims. 250,000 to 350,000 Jews in the country at one point, making Morocco the largest Jewish community in the Arab world.

The Jewish community has suffered from anti-Semitism for thousands of years, and the worse atrocities committed against their people began with the anti-Jewish sentiment that permeated Adolf Hitler’s rise to power in the 1930s, and the founding of the State of Israel, which increased Jewish discrimination all over the world, including Morocco. The Jewish community in Morocco, once thriving, was reduced to ruins, with only a handful of people remaining. Less than 2,500 remain today.

Casablanca, however, as the arguable heart of Morocco’s Jewish community with numerous Jewish schools, synagogues, and kosher restaurants, continued to welcome them and preserve their heritage and way of life.

Focusing on similarities rather than differences within the religious communities of Casablanca, the Moroccan Jewish Museum houses Jewish artifacts such as  Hanukiah menorahs, mezuzahs (a piece of parchment, a klaf, containing a decorative case and inscribed with Hebrew verses from the Torah – Deuteronomy 6:4–9 and 11:13–21), and a bimah, an elevated platform used for readings of the Torah, from the Beni-Issakhar Synagogue in Casablanca. The museum also exhibits a large art collection, a majority of which was donated by French Moroccan opera singer David Serero, and jewellery that once belonged to Moroccan Jewish families.

Believing similar museums should be established in the Arab world to preserve a fundamental part of history, the museum’s director and curator Zhor Rhihil has stated: “as museum curators, we regret the heritage we lost,” he attests. “I believe that any Jewish Moroccan component is essentially Moroccan before being Jewish. Today, we feel that we have lost something of that Moroccan characteristic. It was that feeling that drove a number of Moroccans, regardless of their faiths, to join hands”.

Casablanca’s Dar ul-Aala is a museum devoted to traditional Mauro-Andalusi music. A recent establishment founded in 2010 by the Society of Amateurs of Andalusi Music in Morocco, the Dar ul-Aala celebrates a type of music developed by the Moors, with influences from Maghreb (Algeria, Morocco, Tunisia, and Libya). The style of music itself originates from around the 9th century – legend says it was created in the Emirate of Cordoba (Al-Andalus) – and by the 10th century, with Muslim Iberia establishing itself as a centre for the manufacture of instruments, the music travelled around the world with the instruments made in the Arab world.

The music proved to be popular with the Jewish community, with historian Haïm Zafrani stating in his book Jews of Andalusia and the Maghreb on the musical traditions in Jewish societies of North Africa: “In the Maghreb, the Muslims and Jews have piously preserved the Spanish-Arabic music. In Spain and Maghreb, Jews were ardent maintainers of Andalusian music and the zealous guardians of its old traditions”. Morocco’s Jewish community played a key role in the preservation of various aspects of Moroccan culture, including music.

The Dur ul-Aala museum is home to a variety of ancient instruments, including early violins, and native Arab instruments such as the rebab and the oud. The museum also protects ancient, manuscripts, publications, and musical recordings relating to Andalusi music and its legacy.

Things To Do in Pisa