Bayt Al-Suhaymi: Discover the History of this Historical Location 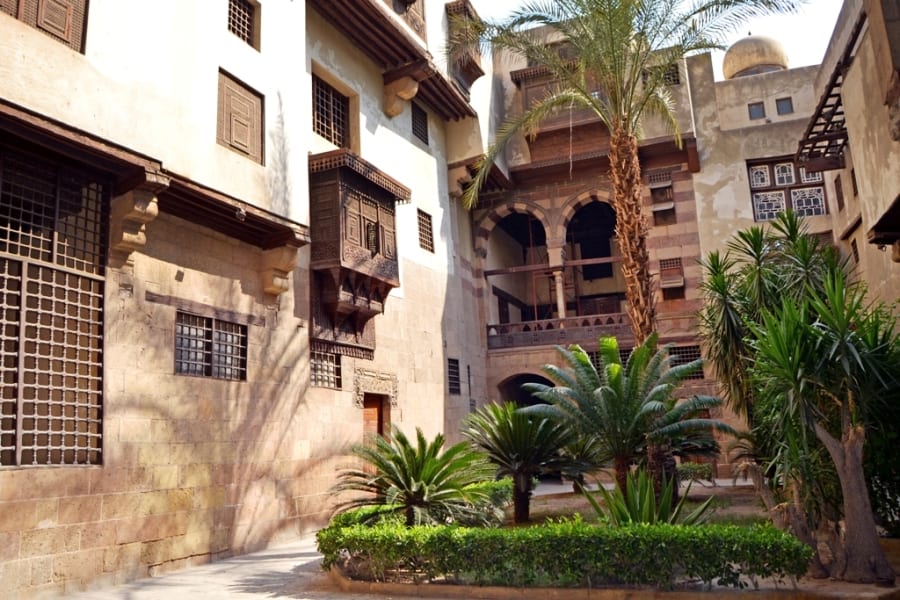 The region of Al-Moez Street has been the central avenue of Islamic Cairo since its construction in the 10th century. Many mosques, palaces, and monuments of the Fatimid, Ayyubid, Mamluk, and Ottoman rulers are built within this region. This made Al-Moez Street one of the densest Egyptian regions with Islamic monuments. One of the finest Islamic monuments that is just meters off of Al-Moez Street is Bayt Al-Suhaymi. This Ottman gem stands to demonstrate what life was like for the wealthy in this era with its embellished beauty and astounding architecture.

Bayt Al-Suhaymi (House of Suhaymi) is a great example of Islamic architecture and homes for the wealthy in Cairo, Egypt. It is the only complete surviving house from the Ottoman period that represents the residential architecture in Egypt during that era. The first section of the house, which was in the southern area was built by Abdel-Wahab Al-Tablawy in 1648 in the neighbourhood of Darb al-Asfar (the Yellow Way), near Al-Moez Street.

Ismael Shalabi further built the northern section in 1797 and merged the two sections into one house. This historical house gets its name from its last resident, Sheikh Muhammed Amin Al-Suhaymi, who was a sheikh in Al-Azhar Mosque. In 1930, King Fouad bought Bayt Al-Suhaymi from the family, turning it into one of the ancient Islamic monuments in Egypt. The house was neglected and marginalized after a destructive earthquake hit the country in 1992 until the Arab Fund for Social and Economic Development restored the house to its original and glorious state.

The Unique Structure and Architecture of Bayt Al-Suhaymi

The house is built around a sahn (a courtyard) in the centre, which includes a small garden with palm trees, and a lot of the original marble floor work, wooden furniture, and ceiling decor are still intact to this day.

Like most houses of the era, it is divided into the men’s (salamlik) and women’s (haramlik) quarters. Due to the humid climate during the summer in Egypt, most houses, like Bayt Al-Suhaymi, added shaded courtyards, as well as balconies and roofs that were used as the living areas during the hot day, while the family moved to the indoor living areas at night.

Unlike today’s houses with regular low ceilings and modern air conditioning appliances, Bayt Al-Suhaymi, had high ceilings which allowed the warmer air to rise while the cooler air circulated throughout the house. Also, the thick walls, cool marble floors, and fountains kept the hot air at bay.

There are several separate staircase entries to the house and about thirty chambers on various levels. The harem reception room has a great view of the garden and is lined with marble floors, and its walls are covered with green and blue plant patterned enamel tiles.

The three-storied mansion is built of stone, and visitors can enter the courtyard through a passageway from the street. At the bottom of the courtyard, there is a portico, in addition to a north-facing terrace called Maq’ad on the 2nd floor, both of which were used to receive guests or relax in the shade. The men’s quarters also included a large benched area overlooking the courtyard, where the head of the family would conduct business transactions or meet important guests.

On the second floor is the haramlik (women’s quarters), comprising a reception hall, private rooms, and a bath, and it can be reached by a separate flight of stairs in the courtyard, maintaining their privacy.

In addition to the salamlik and haramlik, there is a large benched area that opens onto the courtyard called the takhtabush. This benched area is where business deals took place and where the harem of the house gathered when no one was around.

The wooden latticework (Mashrabiyya) on all windows also prevents intense sunlight and dust blown by the wind and only allows the cool breeze in during Cairo’s hot summers, and it is also a barrier through which women can look out onto the street without being seen from the outside by the guests in the courtyard.

On the second floor, you can also find the Hammam (bathroom) which is decorated with small coloured glasses integrated into the ceiling dome and arranged like a constellation.

The domed structure in the garden was originally a mausoleum, which was moved from its original location near the Bab al-Khalq after 1952. It is known as the Qubba of Jamal al-Din and dates from the 16th-17th century and its dome is pierced with a geometrical pattern and filled with coloured glass displaying smaller patterns.

Today, the house has been transformed into a museum which foreign visitors can tour for 35 EGP (15 for students).

This house is considered one of the most beautiful monuments of historical Cairo, which led to the decision to transform Al-Suhaymi House into a centre for artistic creativity affiliated with the Cultural Development Fund after its restoration and reopening in 2000, to be employed as a cultural and artistic centre in the neighbourhood of Al-Gamaleya. The Al-Suhaymi Center for Creativity is considered a unique model for the social impact of cultural and archaeological work on the surrounding community, and that is through the cultural and artistic activities it provides, which have become part of the daily life of the neighbourhood’s residents.

Al-Suhaymi House also hosts the largest Egyptian folklore music groups, as well as marionette shows and shadow art performances to preserve these arts from extinction. This is in addition to the various artistic performances that are held throughout the month.

As an open museum of Islamic architecture, Al-Suhaymi House opens its doors to art exhibitions through the exhibition halls that the house contains, which are commensurate with the nature of the place.

All in all, it is an experience not to be missed.