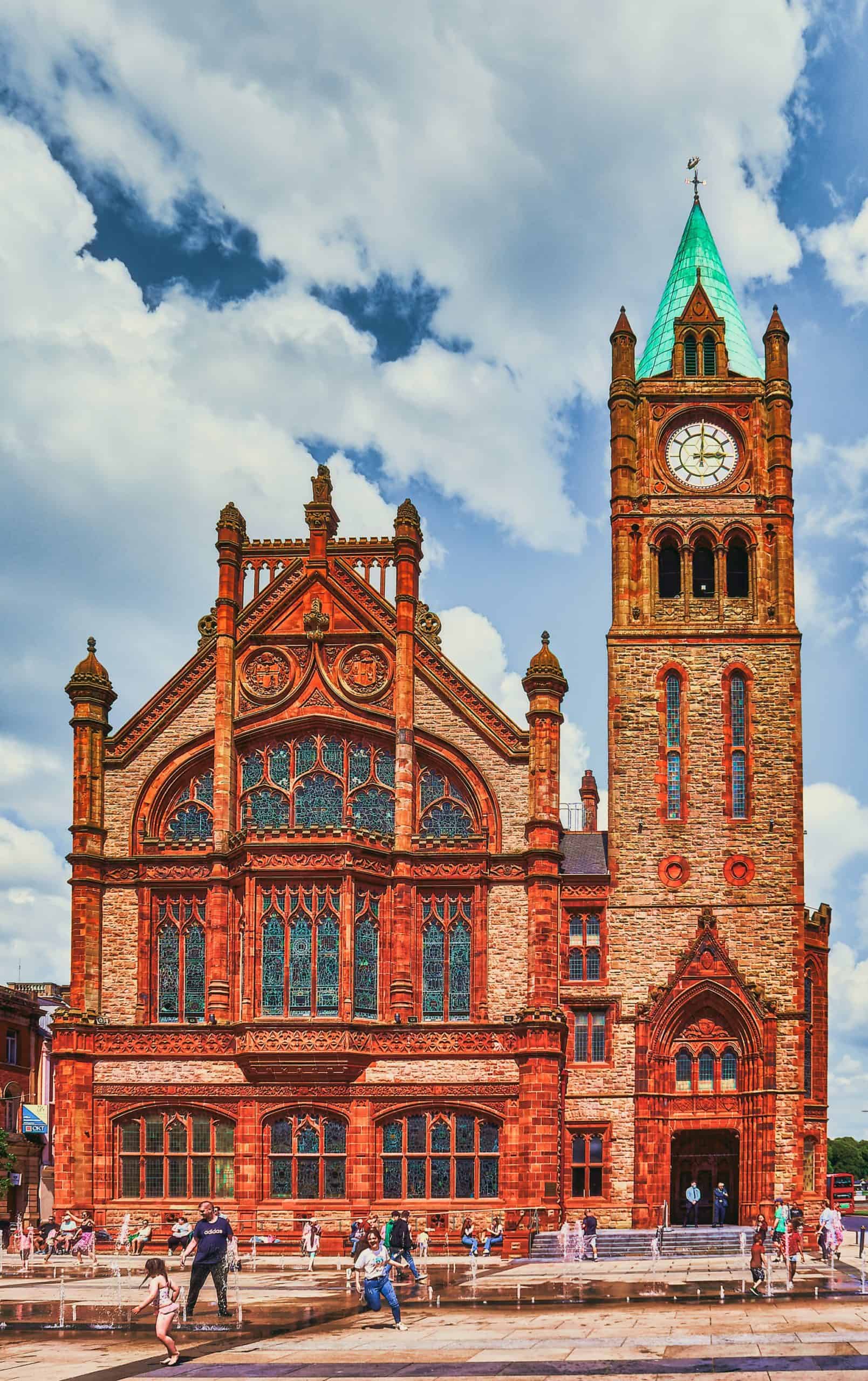 The History of Guildhall

Located in Derry/Londonderry, the Guildhall building is a must-visit while traveling to the UK. (see what we did there!) Northern Ireland, For Sat Nav’s – use the following postcode – BT48 6DQ. It’s one of the most impressive landmarks and has been so since becoming the political center in the 1800s.

In the heart of the city, Guildhall stands as a must-see for tourists to Derry-Londonderry, a structure that has seen numerous events and watched history in the creation. Facts About The Guildhall

It was previously referred to as “Victoria Hall” since it was common practice to name sites in the British Empire after the reigning queen. Because of its close ties to London and its many guilds, the building’s present name honors this link.

The elected officials of the Derry and Strabane District Council convene here. Additionally, the Derry City Council chamber and the Mayor’s Parlour can be found in this building. There are often events held here – from craft fairs to weddings. Halloween is always special in Derry – and The Guildhall plays an important part of that.

As you approach the Guildhall’s door, you’ll see a sign that reads, “The Guildhall is one of Derry’s most recognisable landmarks and has been at the heart of city life since 1890.” While walking along the hall, you’ll come across impressive painted windows and large plaques detailing the buildings and the surrounding area’s history.

Ancient maps and descriptions are on display, and historical literature from the Guildhall’s collection. A maquette depicts what the area may have looked like in the past. The clock tower and neo-gothic architecture adorn the building’s façade.

A vast hall of the Guildhall has hosted various social and political events throughout the years, including Halloween carnivals, the switching on of the Christmas lights, and the Christmas European Market. The Guildhall Plaza in Derry-Londonderry is the city’s central square. As a result of its placement in the city’s commercial, cultural, and tourism sectors, it has become a significant attraction. The Honourable Irish Society initially erected it in 1890; it was demolished in a fire in 1908 and reconstructed in 1912 after it was damaged. Neo-gothic style with Tudor overtones may be seen in the red sandstone tower.

The stained glass windows of the Guildhall depicted Derry’s history and were made by the Belfast business Campbell’s. According to legend, it boasts one of Britain’s most famous clocks faces. Runners-up only to Big Ben Dumfries sandstone, marble, oak paneling, elaborate ceilings, and stained glass windows make up most of the structure.

As soon as one enters the structure, one is greeted with an enormous window exhibiting a variety of emblems from British overseas territories. It’s an opportunity to immerse yourself in Irish culture and history.

In addition to the windows provided by former mayors and other municipal officials, the building also has windows reflecting current economic trends in the city. Other windows in the building commemorate the exploits of the three Irish divisions of the British Army.

Those who perished on Bloody Sunday, 30 January 1972, are honored in the Guildhall’s most recent window. To keep the memory of those who have passed, a path of red poppies runs down the middle. Trace it from top to bottom. Moreover, it’s said that Derry City Council commissioned the window.

The restoration of Derry’s Guildhall won the Irish Georgian Society’s Conservation Awards, and Frank McDonald of the Irish Times praised the “detailed work done to the exterior in rebuilding its ornate gable, which had been leaning outwards, as well as complete repointing of the stonework and restoration of the stained glass windows,” which “impressed the jury (which included myself).”

Asking Where You Can Stay in Derry, Here is Your Ultimate Guide. Much of Fun Are Waiting For You

Dr. Eddie McParland, one of the jury’s members, said, “The recarved stonework was excellent, lots of original details were kept and the original ceiling of the council chamber was revealed.” The Diamond portion of the Walled City in Northern Ireland was home to the Guildhall, first constructed in the 1600s. Unfortunately, it was destroyed in a fire, and the site was eventually transformed into a municipal plaza in its place. It took three years of construction effort to finish in July 1890.

This building’s stained glass windows, donated by numerous London companies who had held property in Ireland and haven’t forgotten their old relationship, were featured prominently in the London Times on September 21st, 1912.

In 2010, most of restorations were done to the building by contractors H & J Martin making it one of Irish landmarks. The cost of the restoration work was estimated at £3M, including the stonework, roofs, windows and stained glass, as well as the clock.

As for the construction work done to the interior of Guildhall, it was estimated to have cost around £5M. With millions of visitors who have passed through this beautiful site, it has already received numerous online reviews.

Such as: “Nice building with free access hosting temporary exhibitions and some permanent items in walking distance from the city centre”.

“This is a beautiful building with so much history attached in the square where a lot of events take place. Close to all”.

Surrounding Attractions to Check Out in Derry

Another one of the iconic monuments in Derry are the massive city Walls on the bank of the River Foyle. Built between 1614 and 1619, the original Walls are almost perfectly preserved today.

London businessmen who were members of the Irish Society funded the construction of the Walls. The construction began under a Royal Charter issued by King James I, to help control the local Irish rebels. In return, the businessmen were made even more wealthy as they awarded large parcels of land in the region.

The Peace Bridge is a cycle and footbridge bridge across the River Foyle in Derry, Northern Ireland. It was inaugurated on 25 June 2011, connecting Ebrington Square with the rest of the city centre.

The construction of the bridge actually has a political motivation behind it. As it is mainly intended to connect the mostly unionist ‘Waterside’ with the largely nationalist ‘Cityside’, by improving access between these areas.

The construction of the bridge was jointly funded by the Department for Social Development (NI), the Department of the Environment, Community and Local Government along with matching funding, totalling £14 million. The 235-meter bridge was designed by Wilkinson Eyre, who also designed the Gateshead Millennium Bridge

The award-winning Tower Museum is located within the city’s historic walls at Union Hall Place.  Permanent exhibitions at the museum include The Story of Derry exhibition and the Armada Shipwreck – La Trinidad Valencera exhibition.  Throughout the year, the museum also hosts a range of temporary exhibitions, featuring interactive techniques to attract visitors.

Also, do read up on the Londonderry Air – a song from the region that has travelled the world as Irish people Emigrated.

Have you had a chance to visit the Guildhall? What did you think? Let us know in the comments below.

Don’t forget to check out our other blogs that might interest you: Peace Bridge | City of Derry – Londonderry | Bogside Murals | Bishops Gate | Belfast Peace Walls