Scrabo Tower: A Stunning View From Newtownards, County Down

Along with the list of those attractions which one should check in Newtownards in Northern Ireland, there is also Scrabo Tower. It is a County Down monument that has been considered the guardian of the North Down Coast.

Scrabo Tower can be seen from many miles away and is also considered a marked replica of some of the Scottish watch-towers. That was built along the border and played a great role in the forays of a long time.

The Beginning of Scrabo Tower

Built-in 1857 as a memorial to the 3rd Marquess of Londonderry, one of the Duke of Wellington’s generals during the Napoleonic Wars, Scrabo Tower stands on Scrabo Hill near Newtownards in County Down, Northern Ireland.

It was originally known as Londonderry Monument and its architecture is an example of the Scottish baronial revival style and symbolised the landlord’s chivalrous duty to his tenants.

Scrabo Tower is surrounded by Scrabo Country Park which looks over Strangford Lough and the surrounding countryside.

Visitors can walk through the exhibition located inside the tower and watch a short video explaining its long and interesting history.

When the 3rd Marquess of Londonderry died in 1854, some of his family and friends decided to build him a monument, which resulted in Scrabo Tower. The top of Scrabo Hill was selected to erect the monument as there it can be seen from Mount Stewart, the Irish seat of the Vane-Tempest-Stewart family, Marquesses of Londonderry.

The Marquis, also known as “Warring Charlie”, was well-respected and quite loved in Ireland for his efforts to alleviate suffering during the potato famine. He earned the respect of his tenants, which prompted them to want to build a monument in his memory following his death in 1854.

In fact, another monument, the Londonderry equestrian statue, was built to commemorate him as well. This time in Durham, England.

Scrabo Tower was inhabited by the McKays, William McKay, his wife and 8 children. The descendants of the family looked after the estate until the 1960s. 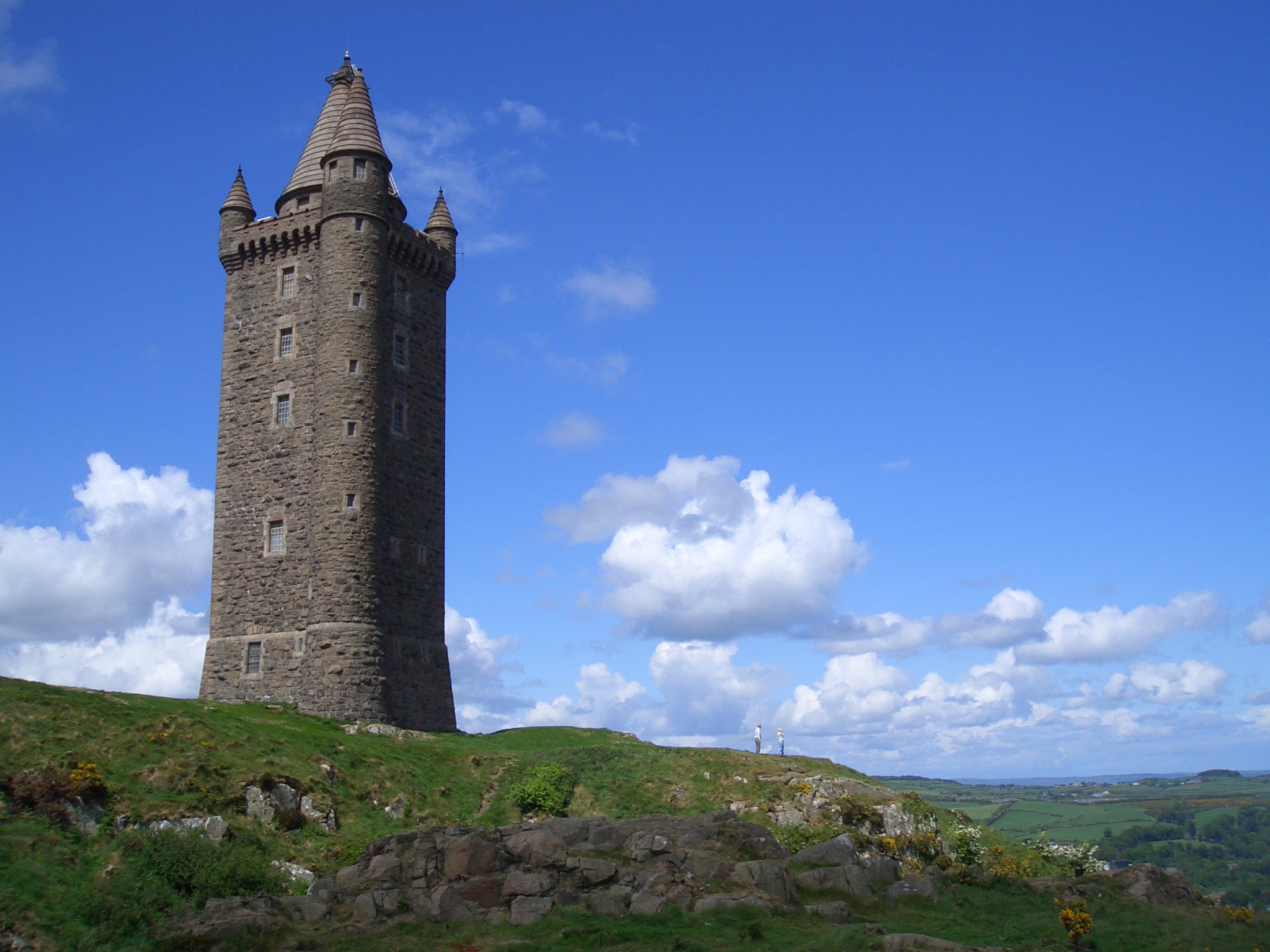 Visitors can climb the 122 steps to reach the viewing deck at the top of the tower, for a spectacular view of Strangford Lough, The Mourne Mountains, and Belfast.

The tower was built on a site 540 feet above sea level and is 125 feet high. The walls are over a metre thick and the entire building is made up of stone from Scrabo Hill.

The design of the Tower was decided upon through a competition that was held in 1855. The first prize went to the design submitted by William Joseph Barre. However, none of the first three projects was executed. Finally, a tender by Hugh Dixon from Newtownards for the fourth project was accepted.

This design had been submitted by the firm Lanyon & Lynn, a partnership of Charles Lanyon and William Henry Lynn that lasted from the mid-1850s to 1860. The design included a tower in the Scottish baronial style that represents a symbol of the landlord as a chivalrous protector of his tenants in times of war.

The interior was left unfinished in 1859 when the cost of the building exceeded the expected budget.

The door of Scrabo Tower is surmounted by a commemorative plaque with an inscription dedicated to the 3rd Marquess:

Fame belongs to history, the remembrance to us 1857”

The budget for the building of Scrabo Tower was acquired through donations fro0m 98 people in total, including Emperor Napoleon III himself.

In 1859, William McKay moved into the tower as caretaker along with his family. Together, they also ran a tearoom in the tower until 1966.

Later on, the tower and the grounds were acquired by the state. In 1977, the tower was listed as a Grade B+ historic building. In 2017, the tower was fully reopened to the public after extensive renovations over the past two decades.

Universal Pictures filmed several scenes of Dracula Untold at Scrabo Country Park & Killynether Wood. This was one of many of the locations used for filming across Northern Ireland.

The creators of the popular HBO fantasy series Game of Thrones chose the area to shoot some of their scenes in the show’s fifth season back in 2014.

Authors also drew inspiration from the Scrabo Tower. Including a story by the Northern Irish writers, Walt Willis and Bob Shaw titled The Enchanted Duplicator. The story features the Tower of Trufandom (true fandom), inspired by Scrabo Tower.

This scenic country park provides a natural and relaxing retreat to visitors who enjoy walking.

The park is open 24 hours a day throughout the year, with parking available from 10:00 am to 4:30 pm, except for public holidays.

Scrabo Tower is definitely a place that should not be missed. If you’ve ever been to the area, let us know about your experience in the comments below.

Also, don’t forget to check out other places and attractions around Northern Ireland that might interest you: Castlewellan Forest Park | The Game of Thrones Tapestry | Exploring Holywood Town | Down County Museum | Greyabbey in Newtownards | Crawfordburn

Donaghadee County Down - A lovely seaside town to check out!