The Peace Bridge was opened in Derry/Londonderry over the River Foyle on the 25th June 2011. It is called the peace bridge because it was thought to help improve relationships of a once very divided community. The largely Unionist ‘Waterside’ and the largely Nationalist ‘City Side’ and the bridge joins the two side together over the river.

Officially launched on 25 June 2011, Ilex built and manages the Peace Bridge as part of Derry~Londonderry’s regeneration programme. Funded by the European Union’s PEACE III Programme (Shared Space Initiative), the £14.5m Peace Bridge has become an iconic structure for the city, connecting the two sides of the River Foyle.

Three years since its launch, the bridge has been embraced by citizens and has radically changed the way people perceive the city. With over three million crossings to date, the Peace Bridge has become a focal point in city activities and events, including the New Year celebrations and launch of City of Culture year, the gateway and backdrop to Radio 1’s Big Weekend, the stage for Lumière installations and several charity events such as Brides across the Bridge.

Officially launched on 25 June 2011, the Peace Bridge was constructed as part of Londonderry’s regeneration program. The project was co-funded by several entities, including the Department for Social Development (NI), the Department of the Environment, Community and Local Government and the European Union’s PEACE III Programme, with a total budget of  £14.5m. It has now become an iconic structure for the city as it connects both sides of the River Foyle.

The Peace Bridge has become a central hub for the city’s activities and events, including the New Year celebrations, the launch of City of Culture year, the gateway and backdrop to Radio 1’s Big Weekend.

The Peace Bridge is a cycle and footbridge bridge across the River Foyle in Derry, Northern Ireland. It is the newest of the three bridges in the city. The 235-meter bridge was designed by AECOM, and Wilkinson Eyre Architects.

The bridge was inaugurated by EU Commissioner for Regional Policy, Johannes Hahn; the First and deputy First Ministers, Peter Robinson and Martin McGuinness; and the Irish Taoiseach Enda Kenny. The main purpose behind the project was to improve relations between the largely unionist ‘Waterside’ and the largely nationalist ‘Cityside’, by improving access across these areas. The bridge is described as a “structural handshake”.

Designed for pedestrians and cyclists, the bridge and stretches from Guildhall Square on the west bank to Ebrington on the east bank.

At first, sectarian tension prevented many from crossing to the other side of the city as many Catholics and Protestants lived largely separate lives. That is why the bridge was originally built to improve relations between both parties and to promote peaceful coexistence. Chief Superintendent Stephen Martin said, “I was here in the 1980s as a police officer for six years – it is a fundamentally different place now. It is a place of hope, it is a place of increasing prosperity and it’s a place where the people of the city want peace.”

The Derry Peace Bridge has been crossed by over 3 million people so far and many of the locals use it daily as it presents a symbol of the triumph of the local people against adversity.

Interesting Facts about the Peace Bridge

“The bridge is a self-anchored suspension bridge for the use of pedestrians and cyclists. The bridge deck is divided into two curved halves, each supported by the suspension system from a single inclined steel pylon. At the centre of the river, the structural systems overlap to form a ‘structural handshake’. The 312m long bridge has six spans in total, three of which are supported from the cables. The main river span is 96m, with a minimum clearance of 4.3m for navigation.”

The Peace Bridge is a beautiful and elegant piece of architecture that was designed by Wilkinson Eyre Architects in London. It is designed as two identical halves, each suspended from a single, inclined steel pylon, which overlaps at the centre of the river to form a ‘structural handshake.’ A powerful metaphor for reconciliation and hope, drawing on inspiration from the sculpture “Hands Across the Divide” by Maurice Harron which can be found nearby. The bridge celebrates how far the city has come and the symbol of hope has become a huge part of Derry/Londonderry. It attracts many visitors, locals and tourist that tells a story of triumph over adversity. 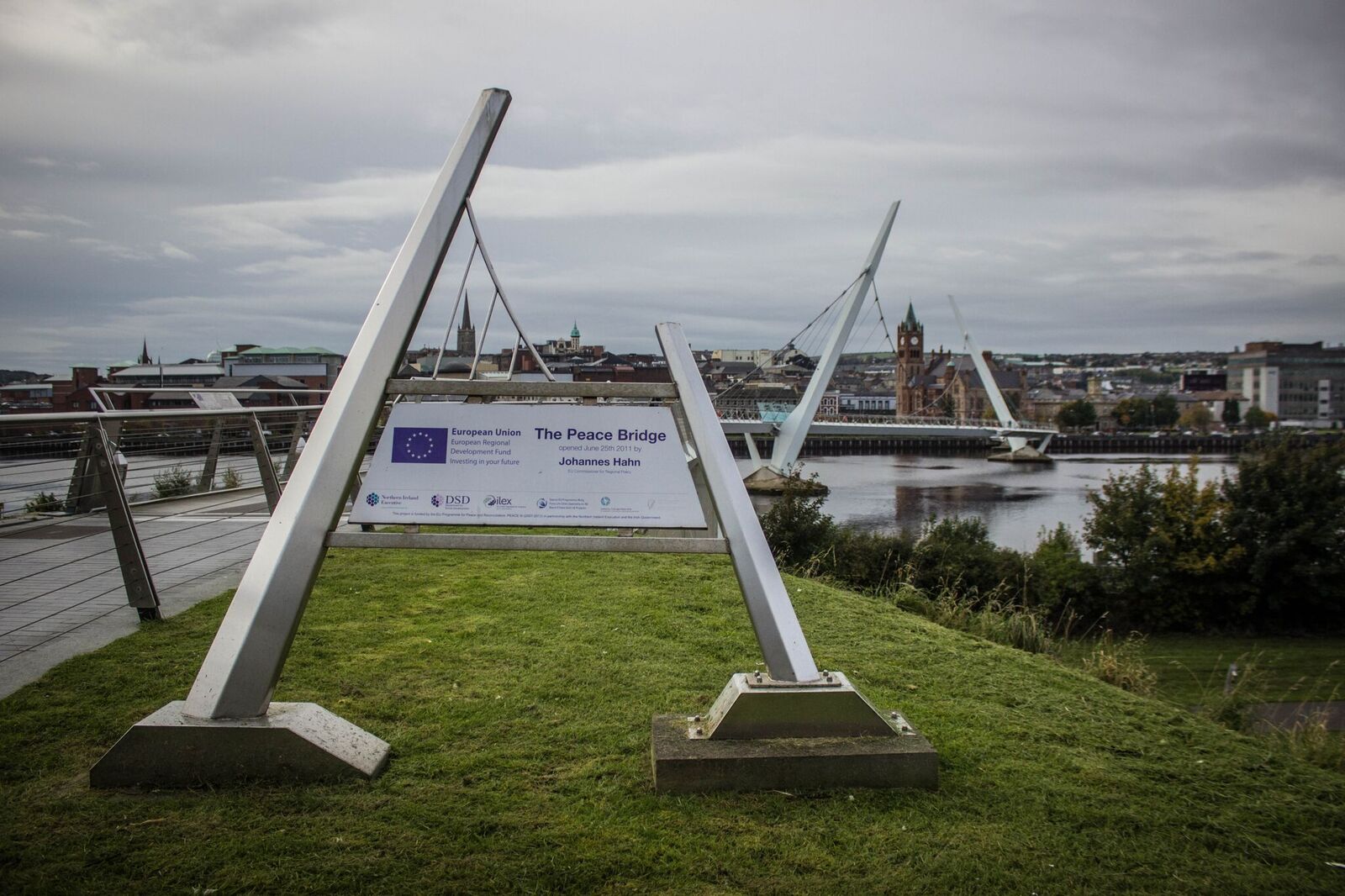 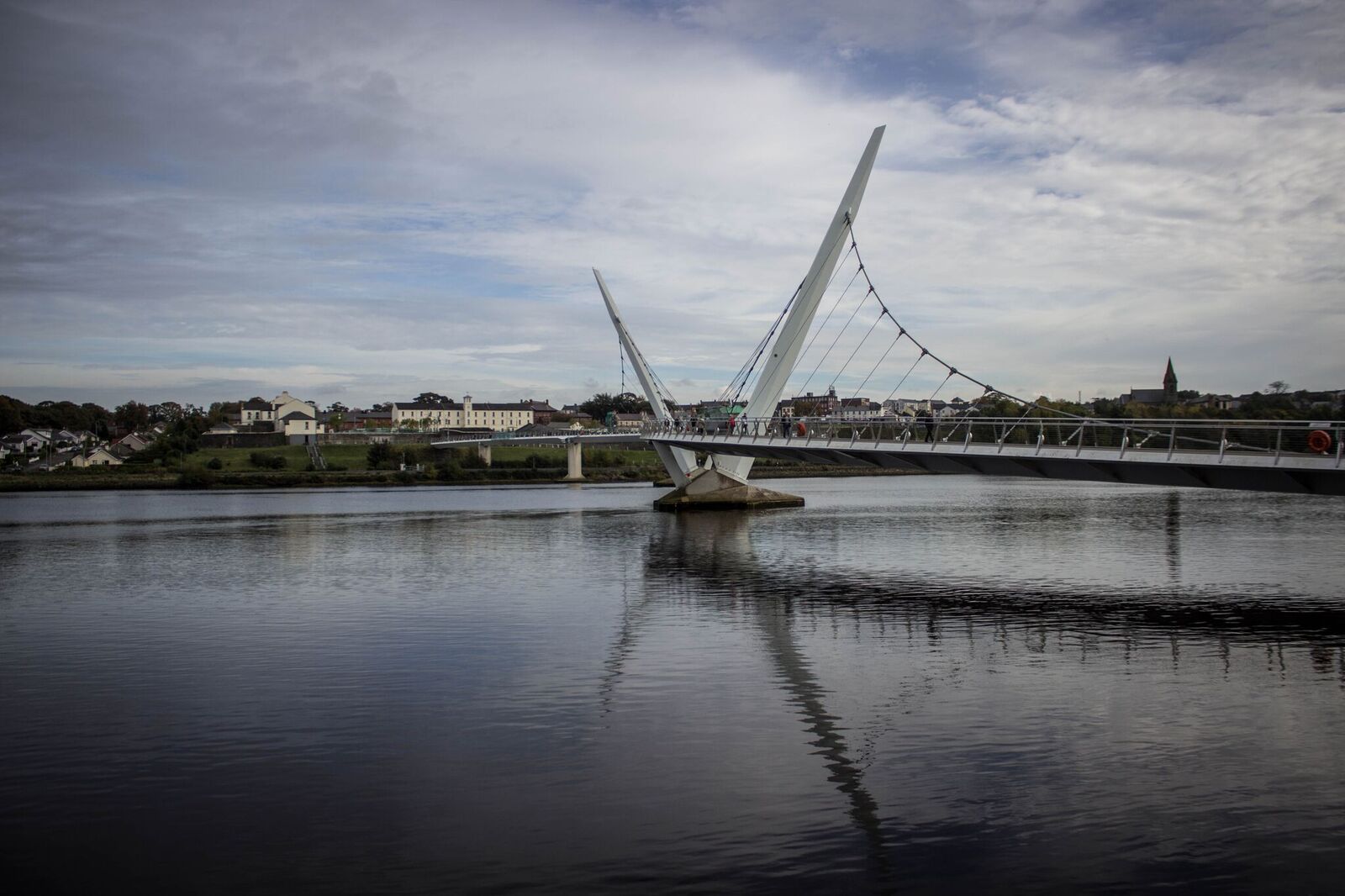 To find out more facts about The Peace Bridge click here

Have you taken a trip to visit the Peace Bridge yet? what did you think of the design? 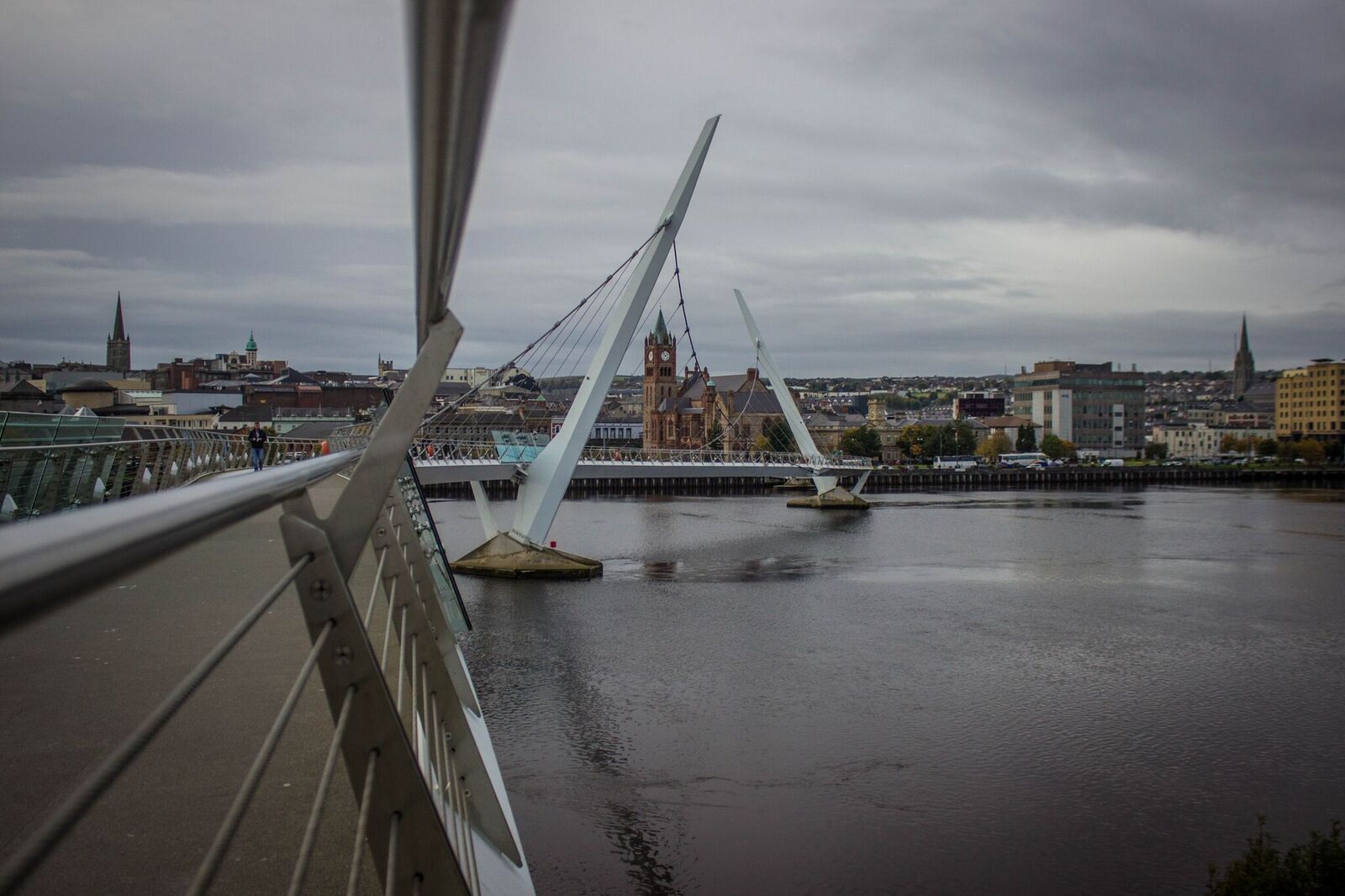 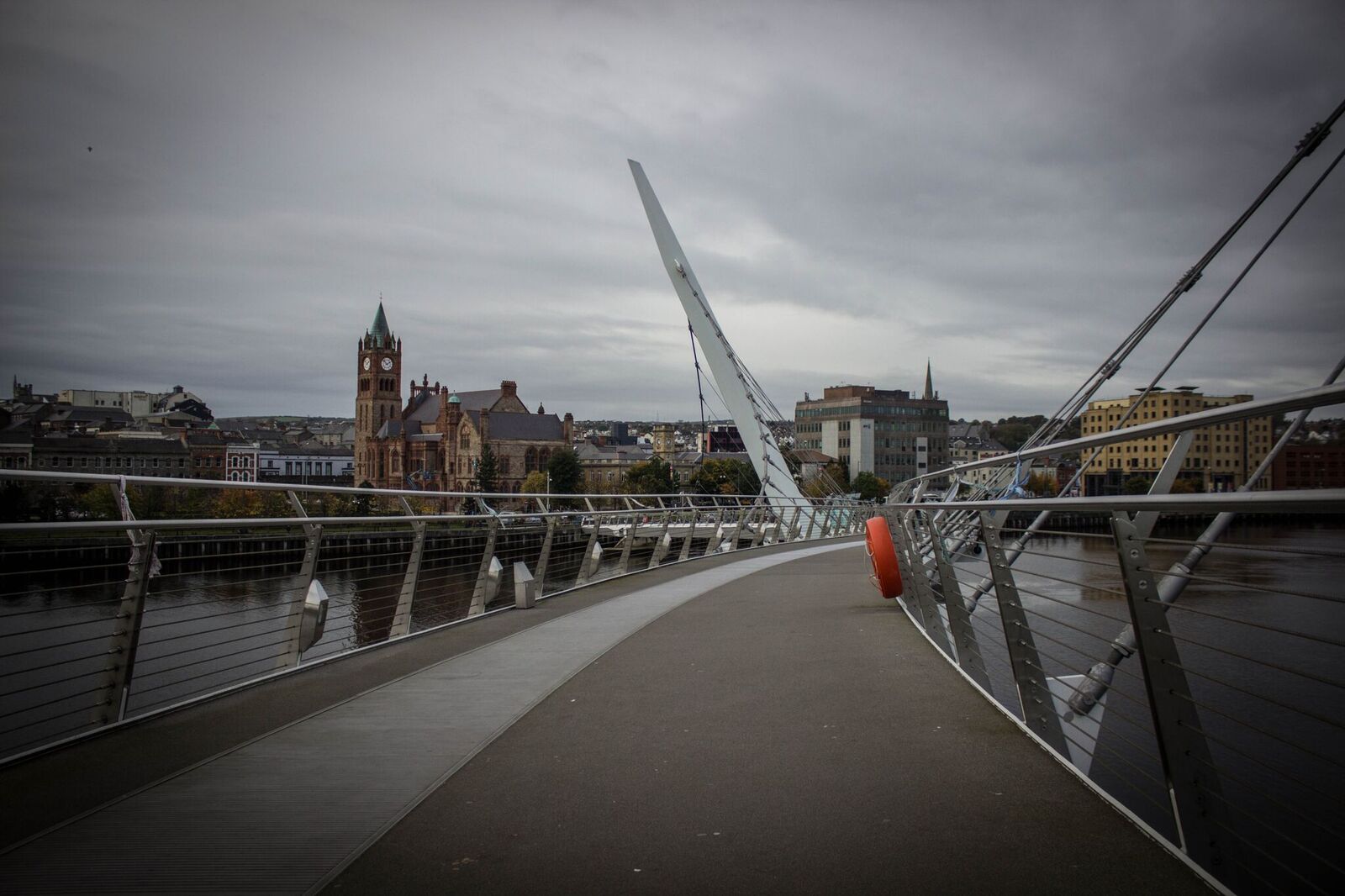 Also if you would like to find out more about Derry/Londonderry and what is has to offer then click here.

Places to Visit near the Peace Bridge

Ebrington Square is a public space and tourist attraction in Derry, Northern Ireland that is an Army Barracks transformed into a public space for various open air events, art exhibitions and music spectacles.

The Tower Museum is a museum on local history in Derry, County Londonderry, Northern Ireland. It showcases the history of Derry and also has an exhibit on a local shipwreck of La Trinidad Valancera which sank off Inishowen in 1588. The museum first opened in 1992 and has won a number of awards.

St Columb’s Park is a public park, on Limavady Road. It was previously an estate that belonged to the Hill family. The vast grounds include a large house which was called ‘Chatham’. In 1845 the estate was bought by the Londonderry Corporation which in turn transformed it into a public park.

The house itself was formerly used as a Nurse’s home for some time before it became the St Columb’s Park House Activity and Reconciliation Center.

The Guildhall is one of Derry’s most outstanding landmarks and has been so since the 1800s. An iconic building that has seen many events and witnessed history in the making, Guildhall stands in the centre of the city to this day as a must-see spot for visitors in Derry-Londonderry.

The Guildhall includes a large hall where many social and political events have been held over the years, including Halloween carnivals, the Christmas lights switch-on, the Christmas European Market. The square in front of the Guildhall is the main city square in Derry-Londonderry, making it a focal location in the city, as they are also surrounded by shopping, cultural and touristic areas.

Have you ever visited the Peace Bridge in Derry/Londonderry? Let us know your thoughts in the comments below.