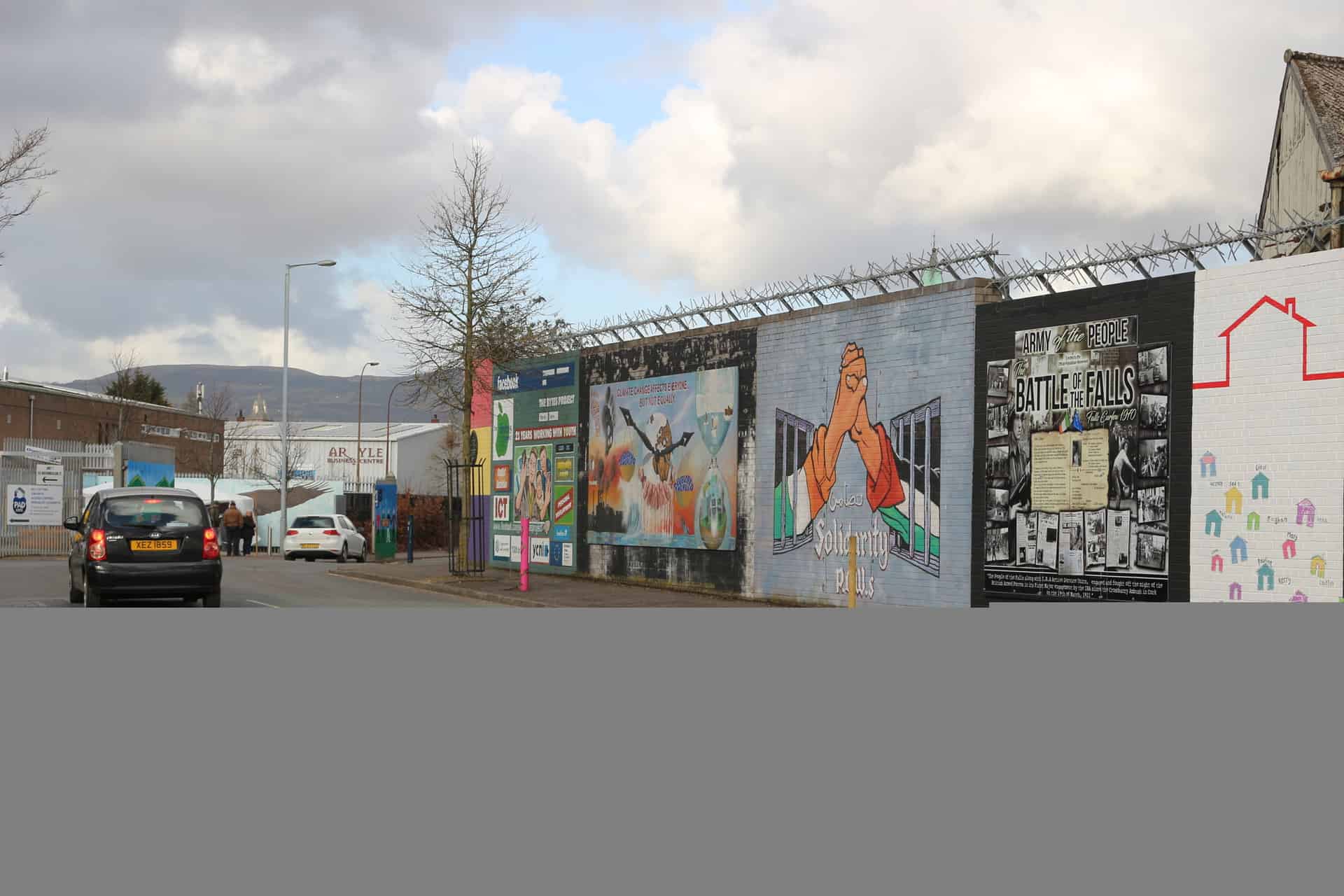 The Belfast Peace Walls are full of amazing murals and history that tells an important story of Belfast, The Troubles and why the peace walls were put in place. You can spend time reading the huge amount of messages people have left on the Belfast Peace Walls from all over the world; they are uplifting and inspiring.

What is the Belfast Peace Walls?

The Belfast Peace Walls are a series of barriers that were erected to separate Catholic and Protestant neighbourhoods in Northern Ireland. They are located in areas in Belfast, Derry, Portadown and elsewhere. The purpose of the peace lines was to minimise the violent interactions between Catholics (most of whom are nationalists who self-identify as Irish) and Protestants (most of whom are unionists who self-identify as British).

The Belfast Peace Walls range in length from a few hundred yards to over three miles. They may be made of iron, brick, and/or steel and are up to 25 feet high. Some of the walls have gates allowing passage during daylight hours but they remain closed during the night.

History of the Belfast Peace Walls

The first of the Belfast Peace Walls were built in 1969, following the outbreak of the 1969 Northern Ireland riots and “the Troubles”. They were originally meant to stay up for only six months, but they were later increased in number and spread through several locations. In recent years, they have even become somewhat of a tourist attraction.

In 2008, the possibility of removing the walls was discussed and in 2011, Belfast City Council agreed to develop a strategy regarding the removal of the walls. Although a study indicated that 69% of residents believed that the peace walls should not be removed due to the continuing possibility of violence, several initiatives led by local communities resulted in the opening of a number of interface structures for a trial period.

In January 2012, the International Fund for Ireland launched a Peace Walls funding programme in an effort to support local communities to begin working on tearing down the peace walls. In May 2013, the Northern Ireland Executive committed to the removal of all peace lines by mutual consent by 2023.

The Conundrum of Tearing Down the Belfast Peace Walls

According to the Guardian, a secret report conducted by the Northern Irish government criticized the speed with which walls, gates and fences were being constructed in Belfast to separate Catholics and Protestants. The report claimed that the walls created an “atmosphere of abnormality” in the city.

Although the walls were constructed to bring a sense of “peace” and prevent any forms of violence between both communities on either side, however, violence has persisted in some areas even after the construction of a barrier. Interface violence is particularly widespread during the summer months when the marching season and the summer holidays start.

Recently, Jonny Byrne, a lecturer in politics at the University of Ulster, likened the Peace Walls to the Berlin Wall by saying, “The Berlin Wall had to come down for Berlin to be normalised. We have normalised Belfast without taking down the walls.”

North Belfast witnessed some of the worst violence during The Troubles.

Some efforts to restore mobility between both sides of the fences have worked since in 2011 a “peace gate” was installed in the iron fence of Alexandra Park.

“The difficulty in any peace wall conversation is that a lot of the initial conversations revolve around a sense of loss. What will I lose?’ asks Ian McLaughlin of the Lower Shankill Community Association.

The answer to Belfast’s peace wall conundrum lies in regeneration, says McLaughlin. “Our core business at one time was peace-building, but now we have a dual approach – regenerating our community and building relations with our neighbours.”

In August 2016, Belfast tore down its first peace wall 18 years after the Good Friday Agreement that brokered a peace deal for the region. By 2023, all of Northern Ireland’s 48 peace walls will be demolished.

Northern Ireland’s government says it wants to bring down every wall by 2023. But it seems that the process can only happen slowly and gradually in order to placate all parties involved.

Dr Byrne, a University of Ulster academic, co-wrote a 2012 report on people’s attitudes to the walls. His report revealed that a total of 69% living near a wall would fear for their safety if it were ever torn down, while 58% say they would worry about the police’s ability to contain any resulting violence. But 58% also say they would like to see them come down “at some point in the future”.

Different places have different fears, Dr Byrne says, “Community safety, fear of being attacked. But also fear of the unknown. People don’t like to change. People are comfortable with what they know…[In] each community, the approach is so different. In some communities, the walls mark where some families who lost loved ones (during The Troubles). In others, there are concerns about anti-social behaviour and youth violence,” he says. “When you get down to the micro-level, it (removing the walls) becomes very difficult. None of this was envisaged when the British military was putting them up.”

The Peace Wall as a Tourist Attraction

According to the Huffington Post, the Peace Wall is listed as one of the Belfast’s top tourist attractions. Visitors enjoying bus or cab tours can stop by and are even encouraged to scrawl their own messages on it.

The most popular peace wall tourist attraction is located between the Shankill and Falls communities of West Belfast. The wall stretches between the communities and is one of the only peace walls within the country to have working roads running through it in the daytime. The roads are then closed at night-time allowing no-through access to the other side under darkness.

On both sides of the peace wall, there are hundreds of murals. Many murals can be seen as Republican or Unionist although, in more recent times, more and more murals are being changed to spread a more inclusive and positive message.

At the Falls/Shankill peace wall, everyone is encouraged to spread their own positive message by being allowed to write on the wall itself. Tourists from all over the world have visited the attraction and are encouraged to write their name if they don’t necessarily have a message to spread.

Many tours and most black taxi drivers in the Belfast City Center can take you on a tour of the different memorials and murals of West Belfast, these tours will include this peace wall. So remember your marker pen to write your name or message.

Celebrations of the Beginning of a New Era

In August 2016, residents at a North Belfast interface have held a celebration event to mark a new era after the removal of a peace wall by the Housing Executive.

Housing Executive Chief Executive, Clark Bailie, said: “The Housing Executive’s role has been to enable the community to take this positive step and remove this physical and psychological barrier 30 years after it was first erected…The transformation of this wall will help to regenerate the area for everyone in the community, it will change the physical environment and the lives of those people who live behind it. Today, it’s wonderful to see local families enjoying this new open space.”

During the Troubles in 1969; a three-day battle against the RUC and local Protestants—widely known as the Battle of the Bogside—the Bogside area became a focal point of much of the events. The Bogside experienced frequent street riots and sectarian conflict lasting all the way to the early 1990s.

Throughout the rest of the 1990s, the Bogside became relatively peaceful compared to other localities of Northern Ireland at that time such as Belfast, even though street riots were still frequent.

Bloody Sunday – also known as the Bogside Massacre – was an incident that took place on the 30th of January 1972 in the Bogside area. British soldiers shot 26 unarmed civilians during a peaceful protest march organized by the Northern Ireland Civil Rights Association and the Northern Resistance Movement against internment. Fourteen people died: thirteen were killed outright, while the death of another man four months later due to his severe injuries. Many of the victims were shot while as they fled from the bullets fired by soldiers and some were shot as they tried to aid the wounded.

The Bogside murals are the most popular murals in Northern Ireland and the perhaps the most well-known political murals in the world. Situated at Free Derry corner, the murals were painted by the Bogside Artists. The Petrol Bomber mural was painted in 1994 and to depict the ’Battle of the Bogside’, which took place the Bogside area of Derry in August 1969. The mural portrays an image of a young boy wearing a gas mask to protect himself from CS gas that was used by the RUC. He is also holding a petrol bomb, a common weapon used by residents to deter the police and army from the area.

We recommend going on a black taxi tour of the Belfast Peace Walls to dive further into the meaning and history of the walls. Local people from the two communities come together to deliver the black taxi tours.

Have you ever visited the Peace Walls? What do you think of them? We would love to know, comment below:)

South Bank - Best Things to do in London