The Hidden Gem of Grianan of Aileach

Hidden away on the road outside of Letterkenny in County Donegal is the Grianan of Aileach. Perfectly placed on one of the highest positions possible to see in all directions. Especially down into the Loughs below it.

Perched 801 feet high on Greenan Mountain – the Northern Uí Néill who originally built on this spot could see into the neighbouring counties and would have provided an impressive defensive position against attack.

Ringforts are common throughout Ireland. They are the most common field monument surviving in Ireland, most dating back to (550–900 CE). There have been about 50,000 ringforts. Over 40,000 have been identified, while others were most likely destroyed by farming and urbanisation.

But first, what are ringforts? Ringforts are circular fortified settlements, ranging between 24–60m in diameter. They exist in Northern Europe in general, especially in Ireland. They are often topped with a timber palisade (a long strong stake pointed at the top and set close with others as a defence) and surrounded by one or more earthen banks. Traces of iron and bronze working were identified in some of these ringforts. Which suggests that some ringforts had specific functions while others were multifunctional.

They were built in different sizes, but they were mostly small defended by one earthen bank or wall. The small ones are considered to have been single farmsteads while the bigger ones, which were defended by more than one earthen bank, were probably the seat of kings and nobility.

History of Grianan Of Aileach

Grianan Of Aileach is a large ancient stone-walled ringfort. Located on a hilltop overlooking Loughs Foyle and Swilly and counties Donegal, Derry and Tyrone. It was the royal citadel of the Northern Ui Neill (Northern O’Neill kings) during (5th–12th cent.).

Ui Neill was a ruler of the Fifth of Ulster, which extended from Tyrone to Donegal. The fort was probably founded sometime around the birth of Christ. Its builders may have found this hilltop the perfect site for the sacred monument there—a prehistoric burial mound or tumulus, possibly from the Neolithic Period (c. 3000 BCE). 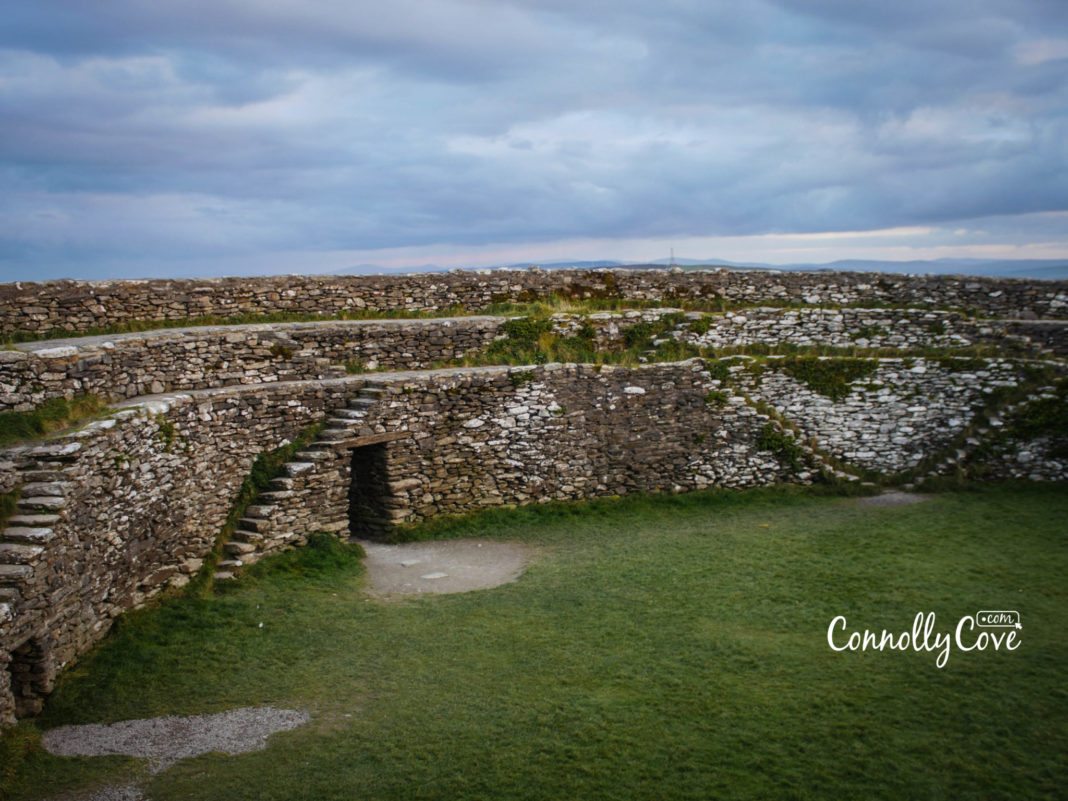 A lintelled passage through the 4.5m thick wall leads to the interior where the wall rises in three terraces to a height of about 5m. Within the thickness of the fort wall, two long passages are found.

Around the Grianan of Aileach are three earthen banks, but little is known about them. They could be dated back to an earlier Bronze Age or Iron Age hillfort. It is believed that the trackway running through these banks and leading to the fort is an ancient roadway.

Underneath the Hill on Grianan of Aileach, it is said that there are underground passages connecting the top of the hill with Scalp Mountain, an Irish Hill 484m Inishowen Mountain overlooking the village of Fahan and about 6 miles further down the peninsula.

Legend has it that sleeping heroes from the past still lie within the hill, to be awakened at Ireland’s hour of need. The hillfort is one of only 5 Irish sites marked on Ptolemy of Alexandria’s map of the world from the 2nd century.

According to Irish literature, the fort was destroyed in 1101 by Muirchertach Ua Briain, king of Munster. Substantial restoration work was carried out in the 1870s by Walter Bernard of Derry. Much of the old structure of the hillfort remains intact, but it is basically different from before. The fort is open to visitors during the summer and closes around 6pm.

Other Ancient Forts in Donegal

Throughout history, County Donegal was an important defensive site which explains the presence of ancient forts. Donegal itself in Irish means “fort of the foreigners”. Other than Grianan of Aileach, we find Fort Dunree, Doon Fort, Inch Fort and Ned’s Point Fort.

Fort Dunree in Irish (Dun Fhraoigh) means “Fort of the Heather”. Fort Dunree is located on the west coast of the Inishowen Peninsula, facing across Lough Swilly towards Knockalla Mountain on Fanad Peninsula in North Donegal. The fort was built in 1798. The fort is now located on a rocky promontory accessed through a natural fissure.

It was remodelled in 1895 to accommodate the latest advances in weaponry technology and was an essential lookout point during World Wars I & II. It was remodelled to have 2 x 4.7 inch (119 mm) QF guns below, and later 12 pounder (5 kg) QF and 2 x 6 inch (152 mm) guns in a battery above.

This important defensive site of the entrance to the deep waters of Lough Swilly came under the control of Britain once again after the Irish Republic had been granted its independence in 1936.

Fort Dunree Military Museum first opened to the public in 1986. The museum presents the rich history and life at Fort Dunree over the years in vibrant and colourful displays via the latest audio-visual and interactive technology. 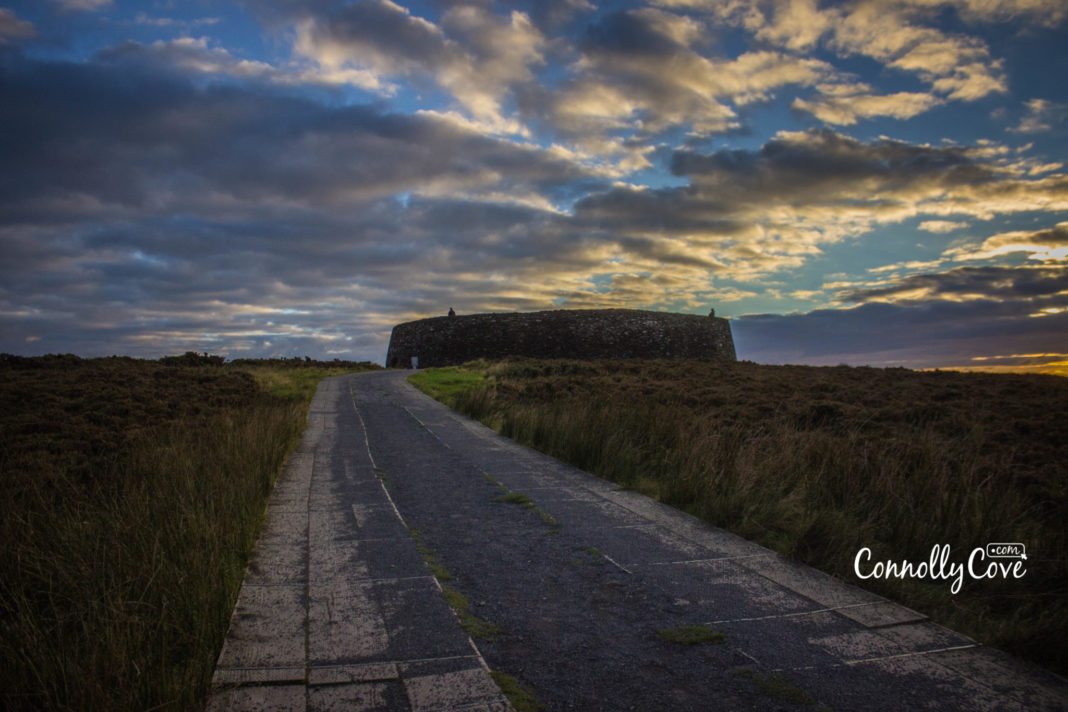 Doon Fort is an ancient ring fort hidden away on Doon Lough near the coastal village of Portnoo. 1500 years ago, the fort was established as a place of refuge 1500 years ago and it’s walls stand 4.8m high and are 3.6m thick.

The walls of the fort were built of small hand-sized stones. This stone fort dates back to 3000 BCE. Its construction resembles other Irish forts, such as Dun Aengus (Aran Islands), Grianan of Aileach (Burt, co.Donegal), and Staige Fort (Kerry).

Inch Fort is a military fort on Inch Island and is considered the perfect place for birdwatchers in Donegal for the variety of migratory birds and waterfowl there, such as Whooper Swan, Greenland White-fronted Goose and Greylag Goose. The fort dates back to the 15th century.

Ned’s Point Fort is one of Napoleon’s many batteries (an artillery unit in the army equivalent to a company) established in 1812 by the British along the shores of Lough Swilly, County Donegal to defend North West of Ireland.

It is located near Buncrana, an important naval town next to Lough Swilly on the Inishowen Peninsula, 23 kilometres northwest of Derry and 43 kilometres north of Letterkenny. (in Irish, Buncrana means “foot of the river”). Walking 500m from O’Doherty’s Keep brings you to Ned’s Point Fort. The fort was remodelled in 1897 as a battery with twin 6-inch guns. In 2012, it was restored.

Not only are ringforts located in County Donegal, but others scattered all over the Irish landscape. Ringforts were where the Celts resided, functioning as defences around their huts.

Dun Aengus is a semi-circular promontory ringfort located on Inishmore off the Galway coast, and one of the famous ringforts in Ireland. It may have been circular in shape and half of it might have fallen into the ocean due to erosion.

The fort dates back to 1500 BCE. It was described by George Petrie, a 19th-century archaeologist, as “the most magnificent barbaric monument extant in Europe”. He was right since the site is situated on the edge of a 100-metre high cliff on the western edge of Inis Mór, about 7km from Kilronan, portraying an amazing scenery.

The fort consists of three irregular shaped inner walls surrounded by a Chevaux-de-frise (a mode of defence designed to baffle an attack), with a fourth outer wall covering 14 acres. The name of the fort Dun Aengus means “Fort of Aonghas”. Which in Irish mythology, refers to the pre-Christian god Aonghas or the mythical king, Aonghus mac Úmhór. The site of this fort served a religious and ceremonial purpose rather than a military one.

On the edge of a limestone cliff descending to the Glen-curraun valley in Co. Clare lies the Cahercommaun stone ringfort. It was built with an arrangement of concentric walls near Corrofin.

Although the site of the Cahercommaun ringfort, which was a cliff-top fort-like Dun Aengus on Inishmore, appears to be deceptively for defence, it did not serve a military purpose but rather a domestic one. Excavations showed that the fort may have been the house of a local chieftain.

Farming activities were carried out where the fort was a centre for a cattle-raising community of about thirty people or more, who also cultivated grain. The central cashel is 30.5m in diameter and its walls are about 4.3m high and 8.5m thick. It has two internal terraces. Excavations conducted in 1934 uncovered foundations of about a dozen very poorly constructed dry-stone houses within the cashel.

Ringfort in County Down

In County Down, a large hillfort is located—Lisnagade. It is a multivallate earthen ringfort three miles west of Banbridge, County Down in Northern Ireland. Lisnagade ringfort is known as the largest rath in Ireland. It is an earthwork 113m in diameter.

There are thousands of other ring forts scattered all over Ireland and many others yet to be discovered. They are common in Ireland, having several purposes—military, domestic, etc. Those enclosed settlements share some characteristics, including their circular shape and having earthen banks surrounding them. 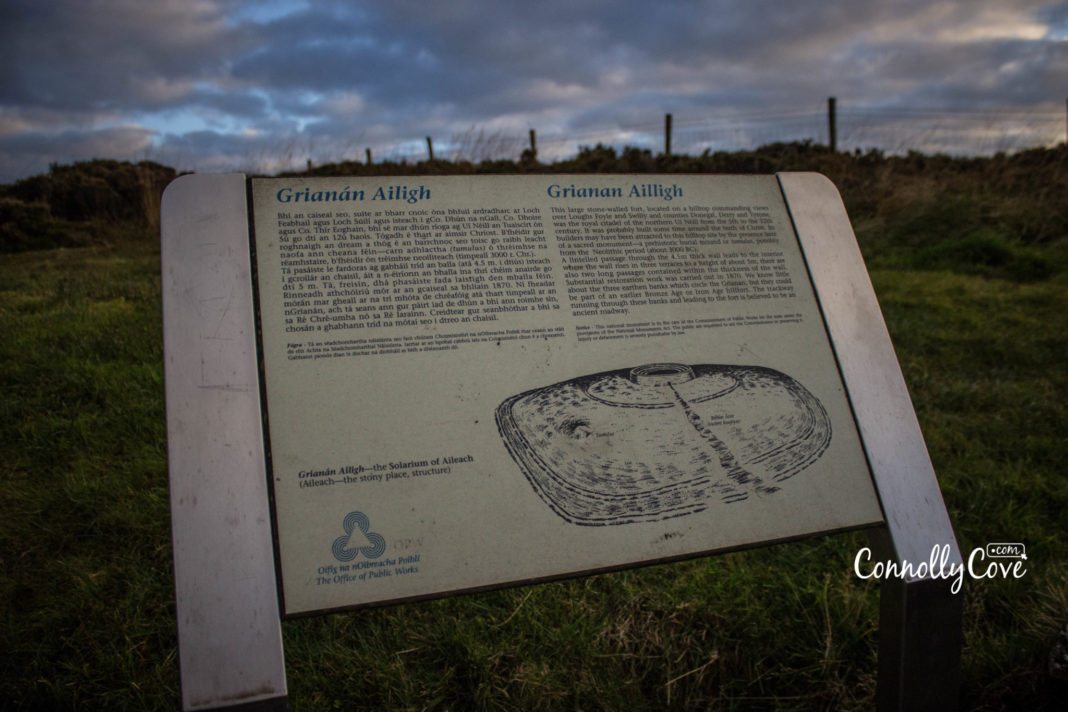 We are blessed in Ireland with all our historic ruins dotted around every county. Which is your favourite? Have you seen the amazing Grianan of Aileach? Let us know!

Also, don’t forget to check out other attractions and places around Northern Ireland such as Bundoran-Donegal | Connemara-Galways | Giants Causeway | Glens of Antrim | Dundrum Castle | Kilkenny | Navan Centre and Fort