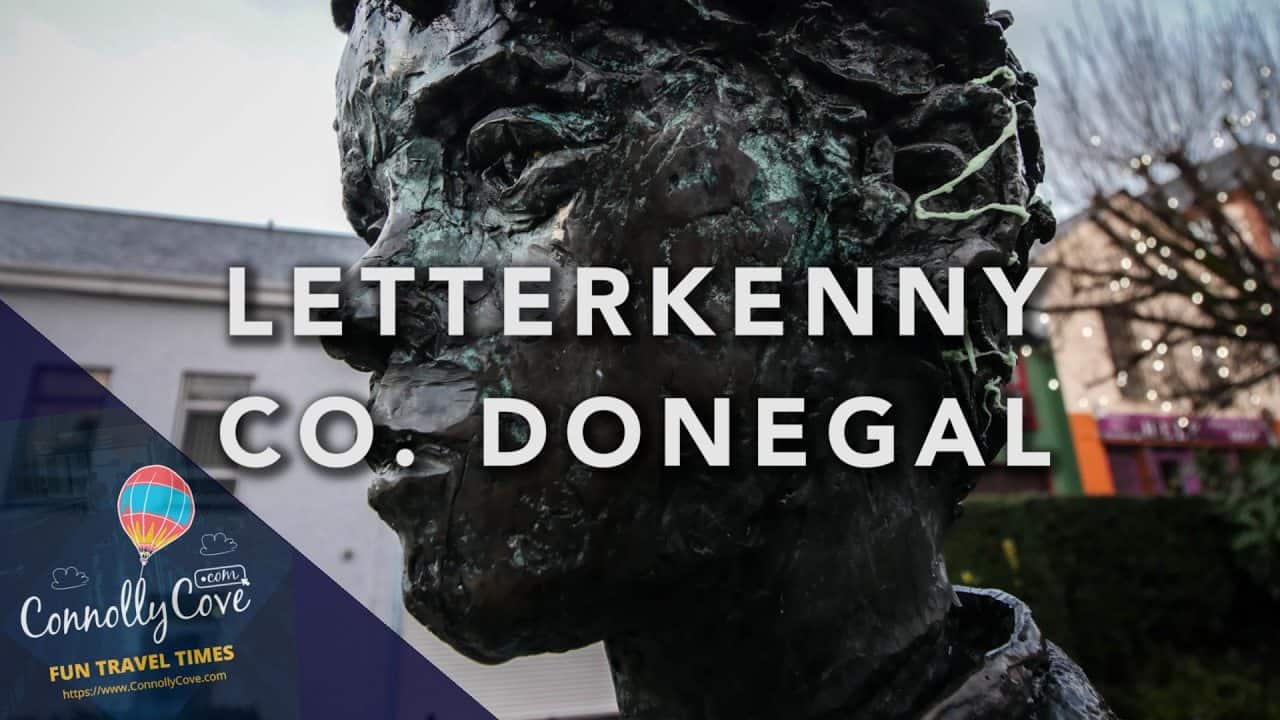 Letterkenny is the largest town in County Donegal in Ulster, Ireland. Its name is derived from ‘Leitir Ceanainn’, meaning “hillside of the O’Cannons”. The O’Cannons were the last of the ancient chieftains of Tír Conaill. The town has now been nicknamed “the Cathedral Town”, due to the fact that the town’s tallest building is the Cathedral of St. Eunan and St. Columba.

The town gained its name from the famous chieftains, the O’Cannon dynasty, who are allegedly descendants of two of Ireland’s most famous Kings. Conn of the Hundred Battles and Niall of the Nine Hostages.

By the early 17th century, the name Uí Canannain had been changed to its anglicized version; O’Cannon.

At that time, Letterkenny was a market town. Letterkenny Castle, built-in 1625, was located south of Mt Southwell on Castle Street. Sadly, no remains of the castle exist today.

Most of the current buildings in Letterkenny were built in the early 1850s. The Cathedral of St. Eunan and St. Columba was designed by William Hague from County Cavan. It is built in a light Victorian neo-Gothic version of the French 13th-century Gothic style.

Another dominant building in the town is the historic Saint Eunan’s College. Saint Eunan’s is three-stories high with four round towers at each corner. It was constructed in the Edwardian version of the neo-Hiberno-Romanesque style.

Other notable buildings include the Mount Southwell Terrace, a Georgian-style terrace of red brick built in 1837 by Lord Southwell. It contains five of the most distinctive examples of Georgian houses in Letterkenny.

The Donegal County Museum can be found in the old workhouse on the High Road. It was built in 1843 in the neo-Tudor style.

What to do in Letterkenny

Letterkenny has no shortage of activates for locals and visitors alike. A cinema complex is located right in the town with eight large screens. If you’re interested in live performances then be sure to visit the Grianán Theatre, the largest theatre in County Donegal.

The Main Street is now a hub of popular night clubs and pubs, including Voodoo, The Pulse, The Grill Music Venue, The Central Bar, The Cavern, Sister Sara’s, Josie’s Bar, McGinley’s, The Cottage Bar and Warehouse.

Places to See in Letterkenny

Glenveagh Castle is a large castellated Mansion in County Donegal, Ireland that was built between 1870 and 1873. Captain John Adair built the castle with the aim of constructing an estate that surpassed Balmoral, Queen Victoria’s Scottish retreat.

Like many Irish castles, Glenveagh Castle has not escaped a few rumours or legends, including one that stated that a curse was placed on the castle due to the cruel evictions of the estate’s tenants, which resulted in none of the subsequent owners to bear any heirs to the family name. True or not, it is definitely an interesting place to visit.

Another area with an interesting legend, it is said that Poisoned Glen got its name when the ancient one-eyed giant king of Tory, Balor, was killed there by his exiled grandson, Lughaidh, and the poison from his eye split the rock and poisoned the glen.

You can follow a rough walking path into the rocky fastness of the glen and see it for yourself.

Built between 1890 and 1900 in Victorian neo-Gothic style on a site overlooking the town, the Cathedral of St. Eunan and St. Columba’s stained glass windows, flying buttress, and extensive grounds are not to be missed!

Located on High Road in Letterkenny, the building opened in 1845 as the Warden’s House of the Letterkenny Workhouse during the Famine. Its purpose is to collect, record, preserve and display the material evidence and associated information of the history of Donegal.

The Museum showcases a collection of original artefacts. Covering subjects such as archaeology, history, social history and folklife. The Temporary Exhibition Gallery shows between 6 and 11 local, national and international temporary exhibitions per year.

The first-floor gallery contains artefacts connected to the history of County Donegal from the prehistoric stone age period, through to the 20th century and the present day.

If you’re a history buff or if you’re simply interested in taking a trip to the past and learning more about the history of Donegal then be sure to visit the Donegal County Museum during one of your excursions.

The park is located on the Glenties Road. The park has an area for picnics and benches. There are three gardens secluded from the main green area, as well as basketball courts and football pitches, and a children’s playground.

Killydonnell Friary was founded in 1471 by the O’Donnells, ruling clan of Donegal. It was completed in the early 16th Century. However, it was closed down and remained as a burial ground for the local community.

According to local legends, the bell of Killydonnell was carried off by raiders from Tyrone who put to sea with it in a boat. A storm came up and they were drowned. The bell is heard to toll once every seven years at midnight.

Interesting, isn’t it? Be sure to stop there on your travels to explore the area.

If you love the outdoors and taking long walks or hiking, then this is the place for you. Bealach Na Gaeltachta is made up of four circular long-distance trails in the Gaeltacht areas of County Donegal. All four trails are graded from easy to moderate. So be sure to pick the suitable trail for you, whether you’re a beginner or an experienced hiker.

The Town of Letterkenny in County Donegal has proven itself to be a must-visit location for travellers, no matter their interests! There, you can enjoy the local nightlife, practice your favourite sport or experience the great outdoors. What more could anyone ask for?

Have you ever been to Letterkenny? If so, let us know your experience in the comments below.

Also, don’t forget to check out other attractions and places in Ireland that might interest you: Exploring County Monaghan | Kilkenny: The Splendid Reflection of the History of Ireland | The Beautiful County of Kerry | Visiting Connemara in Galway | The Magnificent County of Cork