Lisa McGee: the New and Talented Girl on the Block from Derry, Northern Ireland 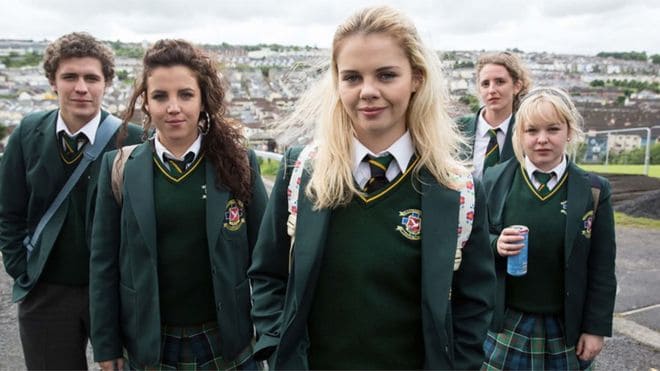 Ireland has proven to create some legendary writers such as James Joyce, Seamus Heaney and Samuel Beckett who all hail from the emerald island.  All these iconic Irish writers have their own unique style that has helped them become so famous around the world, even after they are long gone their words still live on to this day.

But most recently there’s a new girl on the block, Northern Irish writer Lisa McGee who has gained international success with her Channel 4 hit comedy show Derry Girls based somewhat on the Northern Irish town ‘Derry’.

However, there is more to Lisa McGee that just Derry Girl, you’ll soon discover other great work she has helped to bring to life on our screens. Keep reading to find out more about Lisa McGee, her background, the inspiration for writing and more.

Who is Lisa McGee?

For those who aren’t aware of Lisa and her writing, you surely will after reading this. Lisa was born in Derry; Northern Ireland’s ‘City of Culture’. When she was young she dreamed of having a career within the theatre scene. After she had finished up school at Thornhill College in Derry, McGee moved to Belfast to study drama at the iconic Queens University.

However, she quickly realised that acting wasn’t for her, proclaiming that she couldn’t act very while which led Lisa to find her now passion for writing. Good thing she did or we could have never got the hilarious Derry Girls.

After University Success for McGee

While Lisa McGee was in the midst of her university life, she scripted her first plays.  One was the successful Girls and Dolls, which won two awards; the Stweart Parker Award in 2007 and the Blackburn Prize. The second play she created was ‘How to Get to Heaven From Belfast’, a student production performed at a Belfast bar; The Parlour.

Once Lisa McGee graduated from Queens University in 2002, she and few of her friends set up their own company called ‘Sneaking Productions’. Together they created and brought to life the stage play ‘Jump!’ which was received well with audiences at the Cathedral Art  Festival in 2003. Jump! was later adapted into a movie in 2012.

Lisa, also did some work with the Tinderbox Theatre Company in Belfast before she undertook a renowned writing course with the BBC and the prestigious Royal Court Theatre in London, which would be any young play writers dream.

McGee is undeniably a very talented writer and this is backed up by her remarkable catalogue of plays that includes: The Heights, A Little Pink Light, Nineteen Ninety Two, The Opportunities, to just name a few. Not forgetting she has many writing credits for Television including; Things I Haven’t Told You (BBC show), Totally Frank, London Irish (both Channel 4 shows), as well as creating the successful RTE show drama ‘Raw’. Lisa McGee was also part of the writing time for the BAFTA-nominated, BBC show ‘Being Human’.

What truly brought peoples attention to Lisa McGee was the quick success of her show ‘Derry Girls’ which she wrote and produced herself. A unique show that explores life in Northern Ireland during the ’90s, through the eyes of five schoolgirls, while the backdrop of the Troubles is playing out.

The show offers a nostalgic look at Derry from a period of time that was not always remembered as the best for Northern Irish people. The nearly all-female cast was refreshing to see on the screen, filled with dark Irish humour, the only worries on the girl’s minds are boys and partying rather than the violence happening in their city.

Lisa McGee has said that the show is partly inspired by her own upbringing in Derry as she attended a Catholic convent school. Impressively, when the show first aired in January 2018 on Channel 4, it drew in an amazing two and half million viewers. It has now become Channel 4’s biggest comedy show, taking over its other popular Irish show ‘Father Ted’.

Derry Girls went on to have a great second season in 2019 and has been renowned for the third season.

Lisa Mcgee is married to Tobias Berr, who is also a writer and actor, in the past, he has worked with the Royal Shakespeare Company and the Globe Theatre. They both live and work in London with their son. The talented couple are also working on a new project together called ‘The Deceived’ which you’ll hopefully hear more about in the future.

Derry Girls was also nominated for a BAFTA in 2019 and Lisa took home the British Screenwriter Award for Best Comedy Script for TV in 2018. But that isn’t all, Lisa and the team behind ‘Being Human’,  won the Writers Guild of Great Britain Award in the Best Television Drama category.

If you want to keep up with Lisa McGee and what she does in future, you can find her on social media sites Twitter and Instagram.

We can expect big things from Lisa McGee in the future, her writing style is endearing, relatable and fresh that’s sure to make its way around the world, as she continues to break boundaries and write stories that we all want to hear. Make sure you keep an eye out on this Northern Irish writer.

A Guide to Surfing in Ireland