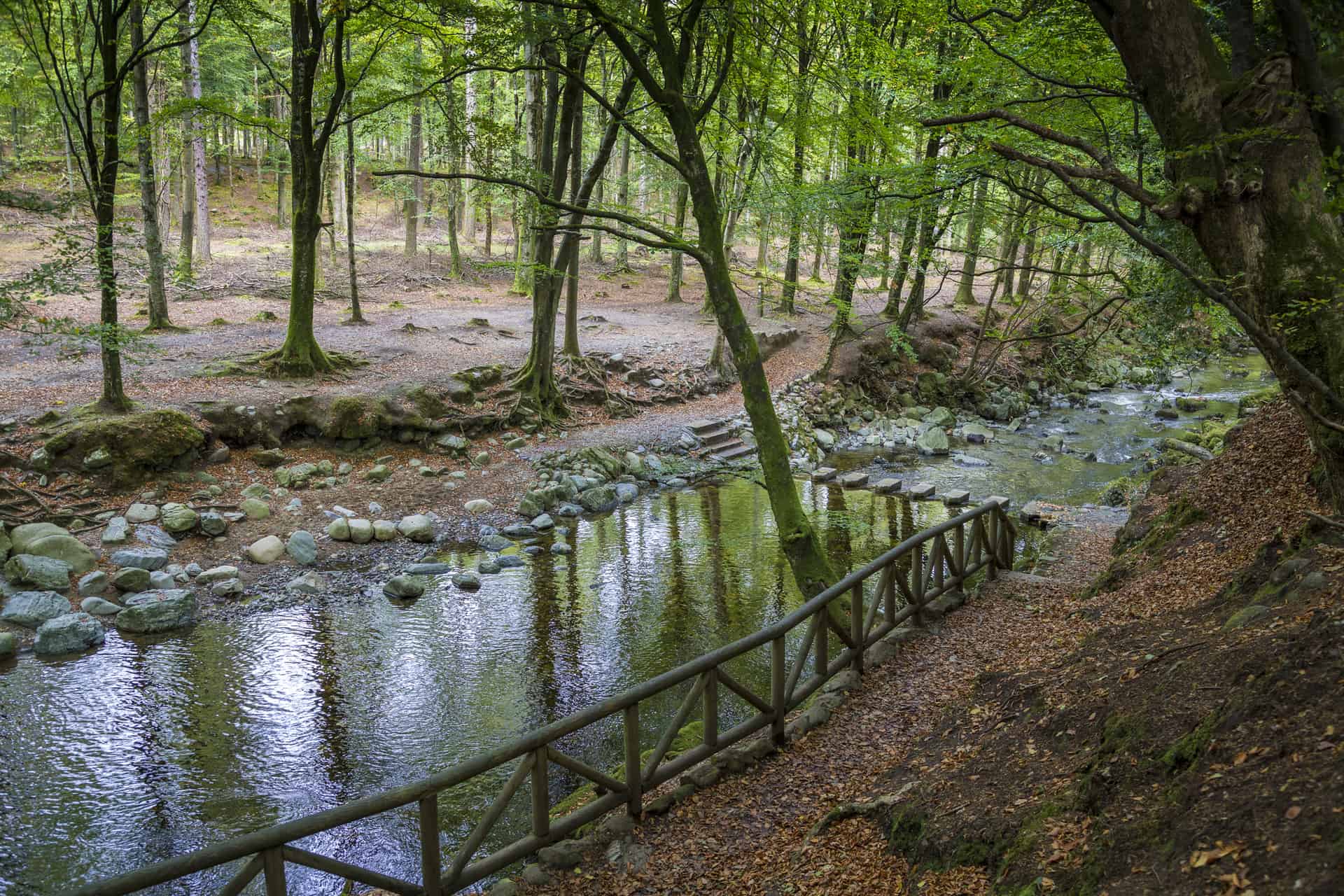 For any lover of nature, Tollymore is a fascinating retreat. This scenic forest park, 3km west of Newcastle, offers lovely walks and bike rides along the River Shimna. And across the Mournes’ northern slopes.

On the outside, it may look like a barn that’s dressed up to look like a church. The stone cones atop gate piers and gothic-style gate arches all show the influence of its highly influential designer. Going for a walk inside it is like walking in Eden: Pretty and omnipotent-like.

Tollymore Forest Park was the first state forest park in Northern Ireland, established on the 2nd of June 1955. It is located at Bryansford, near the town of Newcastle in the Mourne and Slieve Croob Area of Outstanding Natural Beauty. The name Tollymore (Tulaigh Mhór) is derived from “large hill or mound”. Referring to the two hills, approximately 250 m high, which are located within the forest boundary.

The Magennis clan were the first to gain control of the area of Tollymore after the Norman Invasion of Ulster at the beginning of the 12th century. The Magennis established their presence in the south of Ireland. The land was passed on through generations until Brian Magennis’ only daughter Ellen, who was married to William Hamilton of Ayrshire, controlled the land.

William Hamilton was from County Down. The land was passed to his son James upon his death in 1674. The Hamilton family remained owners of Tollymore until 1798. The great-grandson of William Hamilton, James, died in 1798 without children. Tollymore’s possession was transferred to his sister Anne. She was married Robert Jocelyn, 1st Earl of Roden. The Roden family continued in possession of Tollymore throughout the 19th century. Although in 1930 Robert Jocelyn, 8th Earl of Roden sold part of the estate to the Ministry of Agriculture for afforestation purposes. The remainder was sold to the Ministry in 1941.

Long before it was formally opened in 1955 as Northern Ireland’s first national forest park, Tollymore, with its rivers, streams, mountains and glens, had been a source of pleasure and excitement. Anyone is free to wander, explore, go for a fitness run and work out on the trails. You’ll stumble upon the many stone monuments and architectural features and above all, to consider the lives that were played out here over the centuries.

Covering an area of almost 630 hectares (6.3m2) at the foot of the Mourne mountains. Tollymore forest park has extraordinarily panoramic views of the surrounding mountains and the sea at Newcastle. Exploring the park is part of the pleasure of staying here. The stone bridges and entrance gates are of particular interest. The picturesque Shimna and Spinkwee rivers rise in the Mournes and flow through the park. Tree lovers appreciate the arboretum with its many rare species.

Want to explore another fascinating forest in Ireland? Click here.

A rounded, high-arched bridge spans a gulch over a river as it flows into a deep pool and on downstream. This is Foley’s Bridge, one of several bridges to be found in the graceful setting of Tollymore Forest Park. It is a romantic sight, even on a dull winter’s day as the nearby beech trees stand wet and bare. Inspired by a similar one, once seen on an Alpine trip to Italy. This bridge was once believed to have been created in honour of a beloved wife.

The forest has four walking trails signposted by different colours. A walk along the Shimna river is marked by many curiosities, natural and artificial. Including rocky outcrops, bridges, grottos and caves. The River, inherently, flows through the forest adding to its reputation for being a superb place for a picnic. Anyone may seek out the original tree of the slow-growing spruce, Picea abies ‘Clanbrassiliana.’ Which originated nearby in about 1750 and is the oldest tree in any arboretum in Ireland. A magnificent avenue of Deodar cedars is a striking feature of the entrance to this romantic forest park.

Four waymarked trails of varying lengths take the visitor on a tour of the park’s most beautiful areas. These trails follow a circular route and are signposted from the information board in the main car park. Strong footwear is recommended.

Tollymore arboretum is one of the oldest known arboreta in Ireland. Planting began in 1752 as a Georgian landscape feature. This path meanders past various species of trees from around the world. Including the remnants of lightning struck Giant Redwood and a thickly barked cork tree.

Down the Azalea Walk towards the Shimna river to the Hermitage, this trail passes through both coniferous and broadleaved woodland before crossing the Shimna at Parnell’s bridge. Dramatic views of the Pot of Legawherry can be seen from the trail.

There is an optional spur to the White Fort Cashel before following the Spinkwee River downstream, past the cascades and back to the Meeting of the Waters. The trail proceeds through coniferous plantations, past the duck pond and re-crosses the Shimna River over the Old Bridge, returning to the car park via the Green Rig.

Passing through the Forest Plots this trail enters a beech woodland which in the spring is covered in bluebells. The route runs parallel with the Shimna River before crossing it over Parnell’s Bridge. The trail continues along one of the Shimna’s tributaries through a mature conifer forest.

Good views of Luke’s Mountain can be had as the trail reaches the boundary wall before zigzagging back toward the Spinkwee River, crossing at the Hore’s bridge. The second half of the trail passes through coniferous plantations at various stages of maturity before reaching the second crossing point of the Shimna River at the Ivy Bridge.

The return route to the car park proceeds along the old river drives passing Foley’s bridge and the dramatic Shimna Gorge before returning up the Green Rig.

This additional trail adds a further three miles by circumnavigating the Drinns running along the boundary wall and past coniferous forest to the Curraghard viewpoint. Stunning views of Bryansford, Castlewellan and Slieve Croob are seen on the return route to the second half of the Mountain Trail.

Incredible Features of the Forest

Beside The Shimna River and The Stone Bridges, the forest is abundant with aesthetic scenery.

Planted inside the Barbican Gate entrance you can find magnificent Himalayan cedars (cedrus deodara). That offer wide-spreading branches and blue and green foliage. Forming an imposing and picturesque entrance to the Forest Park.

This is a mass of stones carefully put together to form a room of about 12 feet by eight feet, with an opening to the river path at each end.

There are two larger openings which look down on the river below. At one time in the room, there was a stone seat, a bust and an inscription on the back wall. They were put there by James Hamilton, second Earl of Clanbrassil, as a memorial to his friend, the Marquis of Monthermer, who died in 1770. The bust and stone seat has since disappeared. The inscription in Greek reads: “Clanbrassil, to his very dear friend Monthermer 1770”.

Clanbrassil Barn was constructed around 1757 at the same time as the old parts of the mansion house. The building was used as stables and stores until the end of 1971. The ground floor has been converted to provide an education room and toilets. The steeple at the eastern end has a fine old clock and sundial. The sundial on the southern face of the tower can be read easily in suitable weather.

Tollymore Forest Park is open all year and offers extensive facilities for caravanning or camping. There are toilets and showers (some of which are wheelchair accessible), a fresh water supply, chemical toilet disposal point and electricity hook-ups for caravans.

The forest management is able to provide horses for pleasure rides.

‘Big Deer’ designed for four to eleven-year-olds can be found beside the lower car park in Tollymore Forest Park. This impressive and beautiful wooden play space is sure to keep the kids entertained. It features a giant timber Fallow Deer, castle turret, folly tower and hollow tree all connected through a series of rope-bridges, tunnels, spider webs, basket swings and slides. Parents can sit back, admire the views and enjoy a picnic at the Deer tables as the kids play in this great outdoor location.

Tollymore National Outdoor Centre is located within the forest. It is a centre for Mountaineering and Canoeing Activities. Funded and managed by Sport Northern Ireland. The centre’s aim is to provide an unrivalled service to customers regardless of their level of experience. The centre also has a mountain bike skills course and a climbing wall. The centre entrance is located on the Hilltown Road outside of Bryansford.

Simplicity in Its Pure Form

There are no tales of violent deaths or cruel betrayals. No unhappy ghosts appear to lurk here. It was never planned as the backdrop to a great house. Instead, it evolved as a celebration of nature, with the assistance of inspired planting. Time, neglect and the loss of the main house have done little to diminish its beauty.

Many pages of history have been written since that first deer park was planned. But Tollymore, at the foot of the wonderful Mournes, is as alive and as mysterious as ever. Somehow, as the bluebells begin to surface, here is a place capable of being all things to all visitors, the adventurous and the more sedate.