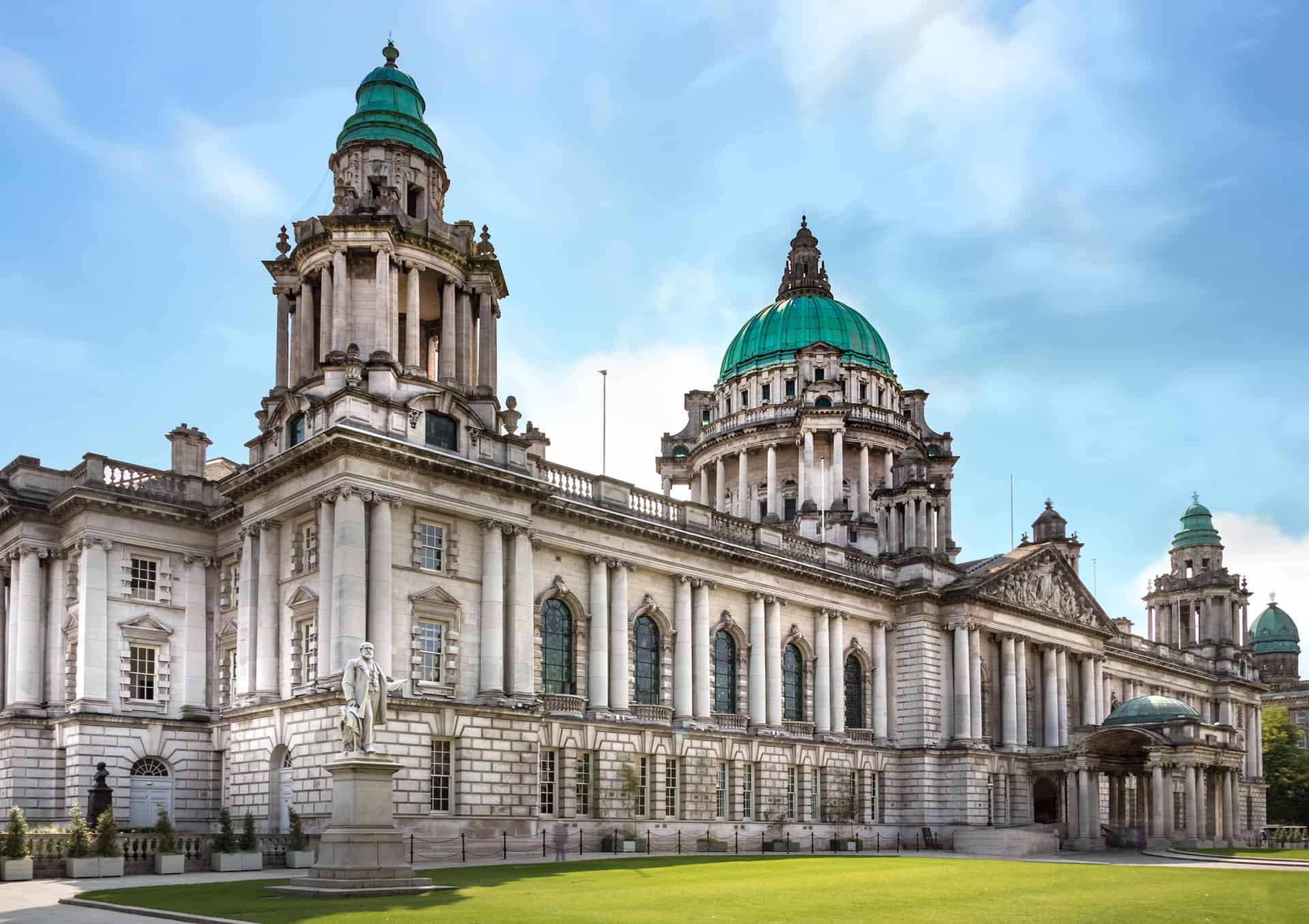 Come along with us as we take a day trip into Belfast City Centre to explore the interior of the History Belfast City Hall. The City Hall in belfast is full of a long and interesting hiostory thats worth exploring.

Check out this 360 Degree Video Experience inside the beautiful City Hall in Belfast City:

Belfast is known to be one of the most prominent counties in Northern Ireland. If you only have to visit one county, then Belfast it should be. You can have a lot of tours there. One tour that you should go on is around Belfast City Hall.

There are a lot of statuses with stories to unfold; a lot of interesting stuff to learn about. Just like shown in this video, the tour is quite interesting and suitable for an entertaining family outing. Let’s learn about the history of the significant monuments that showed up in the above video.

What is Belfast City Hall?

It is hard to not hear about Belfast City Hall when it comes to the history of Ireland. In fact, it is a civic building that sits in Donegall Square in County Belfast, obviously. The building serves as Belfast City Council.

Moreover, the significance of this place lies in how it divides the business areas of the city centre. Such a division is made effectively and it favours the commercial status of the city considerably.

The External Appearance of the Building

The building covers around one and a half acres; besides, it has a courtyard adjacent to it. However, the courtyard is enclosed. Regarding the external style of the building, it is made in the Baroque Revival Style. The latter is actually an architectural style that dates back to the late 19th century.

Above and beyond, the main element of the building’s structure is Portland Stone. Interestingly, the four corners of the building feature towers, one at each corner. The towers have domes, coated with copper, where lanterns crown them on the top.

One of the prominent structures within is the Titanic Memorial that sits on the grounds of Belfast City Hall. This memorial is a portrayal of a female that personifies death and unfortunate fate. Over the status’ head is a wreath of a sailor that drowned. The waves raise him above with the assistance of two mermaids.

Actually, the sculpture objective is to present the disaster of Titanic that took place in 1912. It commemorates the lives taken by the tragic sinking ship. Thanks to the victims’ families, the shipyard workers, and the public. They highly contributed to erecting the memorial to keep the lost souls alive.

Interior Design of the Hall

As fancy as the exterior, the insides of the city hall is coated with amazing marble and other high-quality materials. Besides, there is more than a few types of marble and not just a single one. The City Hall embraces several artworks, including stained glass windows, statues, paintings, and more. Those works of art memorialize many prominent figures that had a significant role in Irish history. This includes Mary-Anna McCracken; the humanitarian that fought slavery and set up schools.

The most noticeable commemoration of all is represented in the stained glass windows. The painting features Queen Alexandria and King Edward VII. They both sit on the throne at that time when the City Hall started. The other painting features a marble sculpture of Fredrick Richard Chichester. He was the patron of the arts and the last Earl of Donegal. The Earl is portrayed lying on his deathbed with his caring mother by his side.

In 1888, Queen Victoria awarded Belfast the status of a city. That was when plans for the City Hall all started. At that time, Belfast was highly recognised that it even became more densely inhabited than Dublin was. It actually goes back to the fact that the expansion of the city was rapid at that time. The city also became popular for housing many industries, including engineering, linen, shipbuilding, and rope making as well.

The Beginning of Construction

While the plans of the Belfast City Hall started in 1888, the actual construction took place 10 years later. Sir Alfred Brumwell Thomas was the architect responsible for supervising the process until it ended in 1906. Many significant firms contributed in the construction of the building, including WH Stephens, H&J Martin, and more.

Interestingly, in 1910, architect Stanley G. Hudson was inspired by the design of Belfast City Hall. Thus, he built an identical style in South Africa for the City hall in Durban. The same can be said about the Port of Liverpool Building. While it is not that identical, it is still a lot closer to the design of the Irish hall.

Belfast City Hall through the Wreckage

Belfast City Hall remained a sturdy structure for as many years. However, a noticeable destruction had taken its toll on it during the World War II. The building endured a direct hit during the Belfast Blitz.

That wreckage could have been easily renovated. However, it was left as it was as a decision taken by the city. Their objective was not to commemorate the unfortunate Blitz, but they wanted to memorialize the lives lost during the tragedy. There would never have been a better commemoration than keeping the bits of the actual event.

Starting from 2011, the building started to witness significant renovations. Two developments that remain the most prominent of them all. The first development was actually Belfast Big Screen; it is found with the grounds of the City Hall. Its purpose is to allow people to experience both cultural and sporting events.

In actual fact, the erection of the big screen as part of the London Olympics Heritage. But, the good news is, that is not the only thing that the development serves. Actually, it also assists in emphasising the important issues of the council all across the city. Over and beyond, it works wonderfully in advertising the latest events and news, especially for visitors.

The other development was the emergence of the Illuminate Project. It was a whole new introduction to the Irish culture. The Project lightens up the City Hall in a variety of colours as a mean to display the culture of Belfast. In special holidays, the City Hall illuminates certain colours to symbolise the day. For example, it illuminates yellow and blue during the celebration of the World Down’s Syndrome Day.

Moreover, it once illuminated in yellow, black, and red as a support to the lives lost in the attacks of Brussels. Besides, it illuminates green during the celebration of Saint Patrick’s Day and red for May Day.

Memorials and Statuses to Enjoy in Belfast City Hall

Works of art are always fascinating. Belfast City Hall is an amazing destination where you can enjoy amazing statuses and memorials. Besides, the gardens that surround the building are a great place to relax and enjoy the scenery of the green areas. It is a popular spot where tourists and young people gather to enjoy their time.

Within the grounds of Belfast City Hall lies a statue dedicated to Queen Victoria. Sir Thomas Brock was the one behind erecting the statue. You can easily notice the statue standing tall, revealing the beauty and power that the Queen possessed.

Apparently, the American Expeditionary Force played a role in the history of Ireland. For that, you can find a granite column dedicated to it. In fact, the column is dedicated to the American Force that was based in Belfast.

The Figure of Thane (The Titanic Memorial)

We have already mentioned the marble figure that commemorates the tragedy of Titanic and the lives lost in the accident. The figure is designed by Sir Thomas Brock as well, he was one of the leading architects in Ireland. Before being moved to the grounds, the monument used to sit at the front gate of the City Hall.

Titanic ship was actually built in Harland and Wolff’s shipyard. The former head of the firm has a memorial within the ground of the hall as well. It is actually a sculpture dedicated to Sir Edward Harland, designed by Thomas Brock, like most of the other monuments. Harland also used to be the Mayor of Belfast beside the owner of the famous firm.

The Memorial of the Main War

This significant memorial of Northern Ireland sits within the walls of the Belfast City Hall. There are also two gardens significant to the event, Cenotaph and the Garden of Remembrance. On Remembrance Day, people visit the place an place wreath at the gardens.

Belfast City Hall is steeped in decades of fascinating history whether that be the build itself, what happens inside and the many amazing features that make it so unique. People can also now get married here and attend a variety of events and award ceremonies throughout the year. Highly recommend the tour of the city hall if you would like to know more about its past and present.

Have you visited Belfast City Hall? Or is it somewhere you would like to visit while in Belfast? Let us know!