6 Things to do in Derry: A Remarkable Place in Northern Ireland 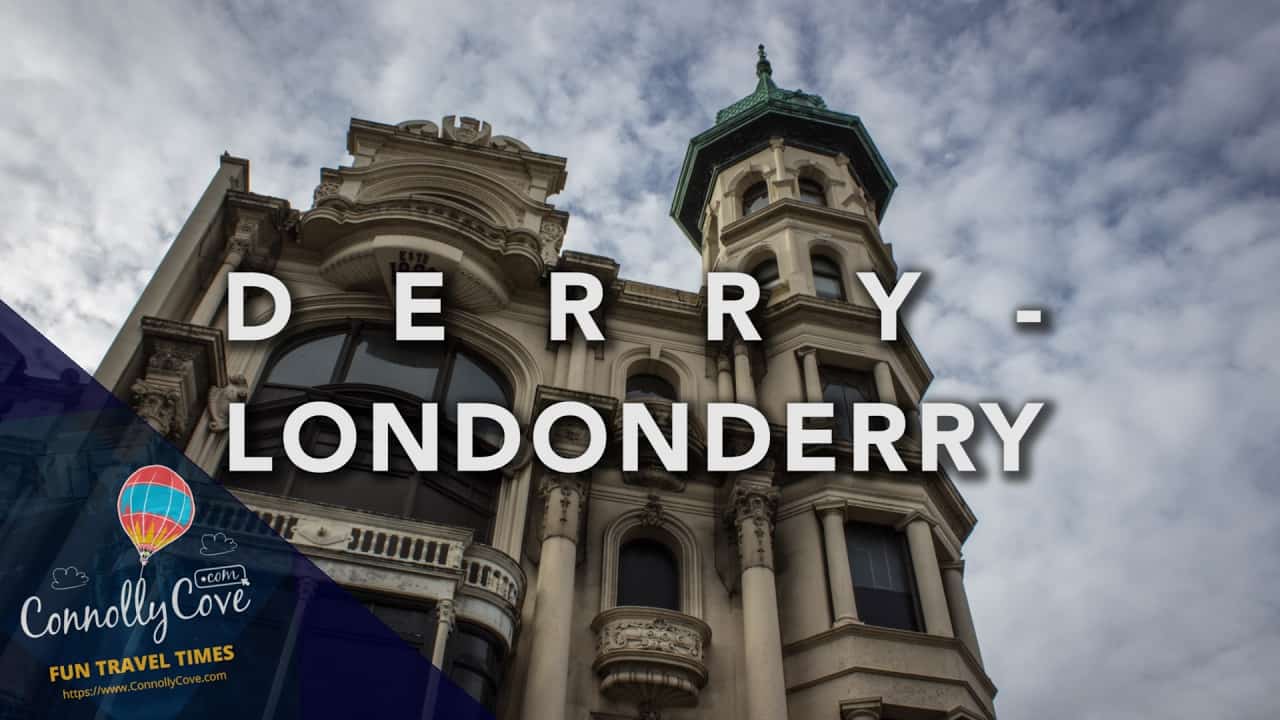 Derry is an exciting place to visit in Northern Ireland, in 2013 it was named as the UK’s ‘City of Culture’, and six years on it’s still attracting lots of tourists from around the world to explore what the city has to offer.

While most people when they come to Northern Ireland plan a trip to see the world famous Giant’s Causeway on the north coast or visit the Titanic Visitor Museum in Belfast. Sometimes Derry gets left behind but the place is littered in attractions of heritage, history, culture and fun that you shouldn’t pass by on your next trip to Northern Ireland.

Just recently Derry became even more popular after the success of the Channel 4 hit comedy show Derry Girls which is set in the city. The show has brought with it cool new attractions in the city such as the Derry Girls Mural, that many people have stopped by to get a photo off.

First on this guide is exploring the historic Derry City Walls; one of the most important urban sites in Ireland. The City Walls brings to life the story of Northern Ireland’s unforgettable past. A living monument that reminds us of ‘The Troubles’; a long period of conflict in Northern Ireland.

For decades the City Walls were closed off, but since the peace process, it has become one of the most visited tourist attractions in Derry. The walls haven’t been changed and still show its original 17th-century structure that offers great views across the city. A visit to the walls are a chance to walk through Irish History.

There are many tour guides in Derry that will take you around one of Ireland’s best preserved 400 years old wall structures and dive deeper into its history. Highly recommend doing as many tour guides as you can especially if you have never been to this enchanting city before.

As the place was once named City of Culture, you can’t pass up the opportunity to experience art and culture in Derry. Take a trip to the award-winning Playhouse Theatre in Derry, first established back in 1992 by Pauline Ross. It has since grown into one of the leading multidisciplinary community art centres in the city.

The popular theatre is home to a 174 seat theatre, a brilliant education department, as well as dance studios and home to a variety of culture/art groups.

It’s one of a handful of places in Ireland that’s still creating shows and touring their theatre show around the country. You’ll be sure to find a lot of fun and interesting shows/events taking places at the Playhouse, a nice way to spend a few hours in Derry!

With a medieval sense and chic antiques coming with cozy restaurants, the Craft Village should be added to your itinerary during your visit to Derry. And don’t forget to check out tons of graffiti art which will be brilliant for snapping away. Finally, it’s a pleasant place to enjoy a drink and stroll, combining contemporary style with old-fashioned sensibility.

The Craft Village is an excellent destination for families or everyone who wants a warm vibe. You will be surrounded by a vast collection of cafes and craft shops, making it a heaven for souvenirs and picking antique pieces.

Unless you want to bit something from vendors lined the avenue with a welcoming setting, it’s one of the free things to do in Derry, Northern Ireland. Also, the Craft Village usually houses some energetic events on different occasions that would be a great chance to catch a glimpse of the distinctive culture of this charming city.

Come here in the morning or night, no matter what, you will enjoy its delights.

You’ll soon come to realise that many of the attractions here focus on its past and not forgetting what the city went through to get to where it is today. The Museum of Free Derry was created to remember the local history, a place to give people a better and deep understanding of this city’s history.

The museum focuses a lot on the innovative civil right struggle that took place in the ’60s in Derry as well as the horrific tragedy of Bloody Sunday.

The attraction is located in Derry’s Bogside and after an extensive redevelopment it opened up to the public. The new and improved museum includes a full multimedia exhibition exploring the early conflicts in the City. The museum has become a very important part of Ireland’s civil rights heritage.

As much as the attraction dives into the past, it also focuses on the future and tells the stories that matter most to its residents. It has become an awarding winning museum where you can find over 25,000 unique items that date back to different parts of the city’s history.

Take a visit to one of the most remarkable buildings located in the heart of Derry City; Guildhall. The beautiful neo-gothic style architecture was built in 1887 and will sure to capture your attention; that’s before you even get inside. It’s also famous for its incredible stained glass windows.

Guildhall will impress visitors with its fascinating history and appeal, inside it’s just as stunning as the outside with its grand staircase and more. In 2013, this attraction underwent a huge restoration costing 9.5 million. It now boasts a brilliant tourism experience, that has become popular with those visiting the city.

Another must thing to do in the city is to take a lovely walk along its famous Peace Bridge and enjoy the views of the city from the water. Many walking tours will usually stop off here and tell you all about the creation and meaning of the Peace Bridge.

Places to Eat in Derry

Derry has got an exciting and blooming food scene; stopping at one of these renowned and great place to eat, is the perfect addition to your time in the city.

Your experience here wouldn’t be complete without enjoying a meal at one of these popular and highly reviewed restaurants. The location of Quaywest is the first thing you’ll notice, located on Queens Quay in a pretty 19th-century boathouse that looks over the River Foyle.

The next thing you’ll be impressed by is its European infused menu that is matched with delicious craft beers and cocktails. Best of all, the food is sourced locally, helping to create its tasty dishes making you want to come back to try more.

A second place to try some of the best street food in Derry is at the food truck ‘Pyke ‘N’ Pommes’ owned by chef Kevin Pyke. Kevin has created something unique in Derry helping to promote the amazing street food in Northern Ireland and Britain that’s taking the place by storm.

Since 2013 the food truck has become an iconic part of the City with is creative and innovated as well as locally sourced food. You must make sure you try this incredible street food on your next visit.

The city is a great place to visit and these are just some of the things you can do there. The stories and history that fills up the city with truly captive your heart and have you planning a second trip before you have even left the place.

Have you ever been to this Northern Ireland City? We would love to know what your favourite things to do in Derry are.

More blogs that you may enjoy:

HALLOWEEN – in Derry/Londonderry – The Halloween City!|Best Free Things to do in Northern Ireland| Top Northern Ireland Attractions|An Insight into the Fascinating Nature of County Derry|

The Stunning Jeanie Johnston: 5 Facts about the Irish Emigrant Ship

Mullingar, Ireland | Why You Need to Visit this Enchanting Town