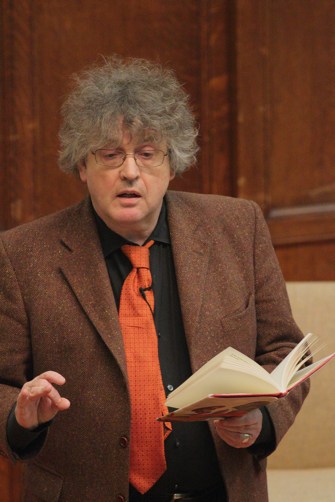 A poetry prize winner, an Oxford Professor and a globally known, celebrated poet. But where did he start his amazing journey? Paul Muldoon has written over 30 poetry collections and is known worldwide for his poetic genius.

Continue reading to discover his journey from a farming background to becoming a globally recognised poet.

Farmer to Writer | His Journey

Paul Muldoon was born on a farm in County Armagh, Northern Ireland. His father was a farmer, his mother was a school teacher and he was the eldest child of three. The young Muldoon pursued his love for literature in 1969 when he studied English at Queen’s University Belfast, where he met Nobel laureate and fellow Irish writer Seamus Heaney. While studying at Queen’s, the young Muldoon published his first collection of poems titled ‘New Weather’ and met his first wife Anne-Marie Conway. His poetry career blossomed after graduation, however, his marriage broke up in 1977.

Following his graduation in 1973, he worked as an arts producer for the BBC for 13 years. During his time working here, he witnessed the worst period of the Troubles. Therefore, it is no surprise that he left Ireland following this and worked at the University of East Anglia, Caius College and Fitzwilliam College in Cambridge while working at these universities he taught English and Creative Writing. Following his teaching career in England, his career took a plane to the US, where he taught at Princeton University. To complete his teaching career, Muldoon took the position of Professor of Poetry at Oxford University from 1999 until 2004.

This famous poet did find love with Jean Haniff Korelitz, they married on 30 August 1987, and they had two children: Dorothy and Asher. They lived in Princeton, New Jersey until 2013, and they since have lived in New York City.

Poetry the World fell in Love with

From Muldoon’s first collection ‘New Weather’ he published while studying at Queen’s University Belfast, it was published in 1973. This set his poetry career in motion. Following this first collection, during the heat of the Northern Ireland’s Troubles, he published ‘Why Brownlee Left’ in 1980, ‘Quoof’ in 1983 and ‘Meeting the British’ in 1987. Like these poems, Muldoon’s style of poetry is usually short pieces which are quite allusive and obscure.

Why Brownlee left, and where he went,
Is a mystery even now.
For if a man should have been content
It was him; two acres of barley,
One of potatoes, four bullocks,
A milker, a slated farmhouse.
He was last seen going out to plough
On a March morning, bright and early.
By noon Brownlee was famous;
They had found all abandoned, with
The last rig unbroken, his pair of black
Horses, like man and wife,
Shifting their weight from foot to
Foot, and gazing into the future.

Throughout Paul Muldoon’s literary career, he has been treasured within the literary community and has received many awards. Muldoon was first awarded the 1990 Guggenheim Fellowship. Following this, he was awarded the 1992 Geoffrey Faber Memorial Prize for his collection ‘Madoc: A Mystery’, the 1994 T.S. Eliot Prize for his collection ‘The Annals of Chile’, and the 1997 Irish Times Irish Literature Prize for Poetry for his ‘New Selected Poems 1968-1994’. Following these, his collection ‘Moy Sand and Gravel’ was shortlisted for the 2002 T.S. Eliot Prize, won the 2003 Griffin Poetry Prize and the 2003 Pulitzer Prize for Poetry.

Following his awards for ‘Moy Sand and Gravel’, Muldoon was awarded the American Ireland Fund Literary Award, the Aspen Prize for Poetry and the Shakespeare Prize, all in 2004. Later, in 2009 he was awarded the John William Corrington Award for Literary Excellence and in 2017 the Queen’s Gold Medal for Poetry.

Along with all of these prestigious awards Paul Muldoon received for his poetry, he has also received honours from prestigious universities across the world:

We cannot wait to read more of his work in the years to come!

If you enjoyed reading about Paul Muldoon, one of Ireland’s leading poets, please enjoy more of our articles about famous Irish literary geniuses: