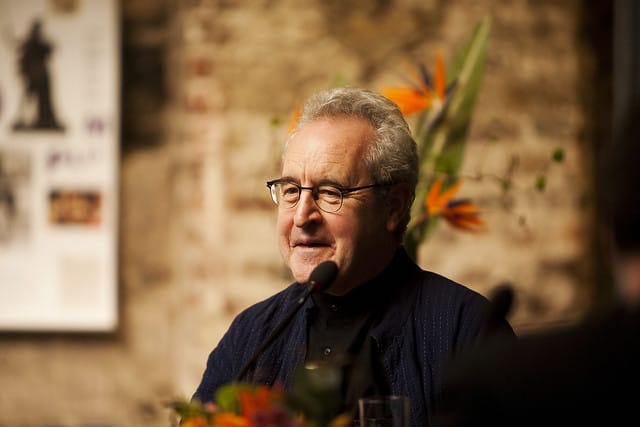 Two writers, one man. An exploration of the styles of John Banville and Benjamin Black: his life, work, and success.

John Banville was born and raised in Wexford, Ireland, in 1945. Although no one in his family was into literature, both his older siblings Vincent Lawrence and Anne Veronica Banville-Evans, became writers.

Because he was surrounded by his siblings’ love for literature, they often gave him books to read. At 13, John’s sister gave him a copy of James Joyce‘s Dubliners, and he was compelled by the everyday life aspects that could be intertwined with fiction. From this time on, he started writing stories throughout his adolescence.

Banville was educated at Christian Brothers primary school and St. Peters College in secondary school in Wexford. He was considering becoming a painter or an architect. After a false start at studying architecture, however, he decided to not pursue any further formal education and became a clerk.

When Banville left school, he was employed as a clerk for Aer Lingus. He was not interested in this job, but was eager to leave Wexford and explore the world, taking advantage of the discount the company offered for its employees. He travelled to Rome, Athens, and Paris, collecting experience to later use in his books.

Banville worked in Journalism for over 30 years. In 1969, he returned to Ireland and became a sub-editor at The Irish Press, rising to Chief Sub-Editor. In 1990 and for many years, he became a regular writer in The New York Review of Books and other international publications. After the Irish Press ceased publication in 1995, Banville focused on The Irish Times and became a literary editor from 1988 to 1999.

He started writing at the age of 13, he tried to imitate Joyce’s Dubliners. His first line was:

The white May blossom swooned slowly into the open mouth of the grave.

John Banville’s first collection of short stories Long Lankin was published in 1970. Followed by Nightspawn, which appeared in 1971. After that, Birchwood hit the bookstores in 1972. In 1973, Banville started working on his trilogy, starting with the release of Doctor Copernicus, then moving on to Kepler in 1981, and finally The Newton Letter in 1982. These three novels form his trilogy The Revolutions and each one explores a great scientist in a historical and modern frame.

In 1989, he started another trilogy named Frames Trilogy. The trilogy starts with The Book of Evidence, which was published in 1989, followed by the release of Ghosts in 1993, and ending with the publication of Athena in 1995. These novels explore themes of mythology, murder, and art. The first novel, the Book of Evidence, was actually inspired by a murder that had happened in Dublin the year before its release.

Perhaps his finest novel is The Untouchable, which was released in 1997. The novel explores the double life of Victor Maskell. Maskell’s character is heavily based on the British historian Anthony Blunt, who confessed to being a spy to the Soviet Union.

After The Untouchable, Banville released his first novel of the Cleave Trilogy in 2000, titled Eclipse. It was followed by the publication of Shroud in 2002. After 10 years, Banville finally released the final novel of the trilogy titled Ancient Light, in 2012. The three novels tell the story of the character Alexander Cleave and his estranged daughter Cass.

The first novel published under the name Benjamin Black was titled Christine Falls in 2006, which was the first of a crime novels series Quirke. Banville views the works under Black’s name are the exact opposite of his works as John Banville—Black was spontaneous, and his stories were tightly plotted.

Christine Falls was followed by the publication of The Silver Swan in 2008. The third novel of the Quirke series called Elegy for April was released in 2010. After that, four novels followed: A Death in Summer in 2011, Vengeance in 2012, Holy Orders in 2013, and finally, Even the Dead in 2016.

Throughout John Banville’s career as an author, he has received many awards. The most notable being:

John Banville has been a constant candidate for the Nobel Prize for Literature. He continues to write, both as himself and as Benjamin Black. The future is bright for this author, and hopefully, a Nobel Prize is in its way.