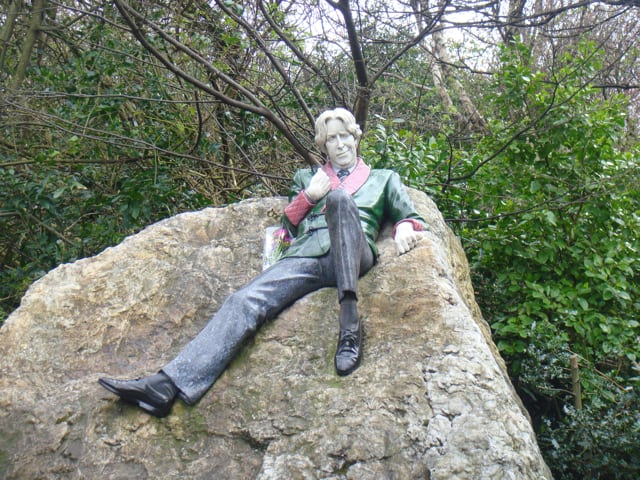 Here at ConnollyCove we love everything and everyone Irish. Continue reading to discover the Life, Work, Fame, and Downfall of the famous Irish playwright Oscar Wilde.

Oscar Fingal O’Flahertie Wills Wilde was born on the 16th October 1854 at 21 Westland Row in Dublin. His birthplace is now the location of the Oscar Wilde Centre at Trinity College. The young Oscar Wilde may have discovered his flair for writing through his mother. She often wrote poetry for the revolutionary Young Islanders in 1848. She would often read her poems to her children. Her passions contributed to his love of Literature and Poetry. His father, William Wilde, was Ireland’s leading ear and eye surgeon (oto-ophthalmologic) and was knighted. He also wrote books, mainly about Irish archaeology and folklore.

When he was young, his younger sister, Isola, died at the age of nine from meningitis. She was born in 1857 after his family moved to No. 1 Merrion Square. At this address, his parents hosted many guests. Due to his parents status and success, throughout his life, he was introduced to many of society’s finest. Some of these included famous writers and poets including Sheridan Le Fanu, Charles Lever, and Samuel Ferguson.

Oscar Wilde was educated at home until he was nine and then attended Portora Royal School in Enniskillen. Later, in his twenties, the young Wilde and his brother Willie (William) spent their summers in their family villa, Moytura House in Cong, County Mayo. Here, they spent a lot of time with George Moore, he also grew up to become a famous novelist and poet.

Wilde was awarded a royal scholarship to read Classics at Trinity College, Dublin from 1871 until 1874. While studying here, Wilde was introduced to many acclaimed scholars, including J. P. Mahaffy who inspired his interest in Greek Literature. Wilde later calls Mahaffy his “first and best teacher… the scholar who showed me how to how to love Greek things” While studying at Trinity, Wilde also became a member of the University’s Philosophical Society. He graduated from Trinity as a highly esteemed individual and was awarded the Berkeley Gold Medal.

Later, Wilde attended Magdalen College, Oxford, where he studied Greats (Literae Humaniores) from 1874 until 1878. While studying there he became known for his role in the aesthetic and decadent movements.

His interests in these developed when he met John Ruskin. Wilde attended Ruskin’s lecture series called The Aesthetic and Mathematic Schools of Art in Florence. Wilde also volunteered alongside Ruskin to convert a country lane into a smart road with flowers along the edge. From this inspiration, Wilde wrote the poem “Ravenna” and was awarded the 1878 Newdigate Prize. In this same year, he graduated with a Double First in his Bachelor of Classical Moderations and Literae Humaniores.

After graduating from Oxford, Wilde returned to Dublin. Here, he was disappointed to find his childhood sweetheart had married Bram Stoker.

Unsure of his life plan, Wilde enquired about lecturing positions at Oxford and Cambridge. He spent 6 years travelling between London, Paris and the U. S. lecturing in different Universities.

Throughout this time, he was publishing many lyrics and poems in magazines including the Dublin University Magazine. In 1881, Wilde made his first collection of Poems entitled “Poems”.  This collection sold out and more were printed in 1882. However, the Oxford Union rejected this book due to alleged plagiarism

In 1882, Wilde journeyed on the SS Arizona to New York. He was invited to do a lecture tour in America selling aesthetic to the public. Due to the success, the tour lasted for a year. His home in London reflected his love for aesthetics, it was surrounded by blue china and lilies.

Due to his successful 5-act play “The Duchess of Padua”, Wilde moved to Paris in 1883. While living there he met Robert Sherard. They became friends and Sherard was Wilde’s first biographer. Later, in the same year, Wilde returned to New York for the production of his play “Vera”. It was popular at first, however, after critics did not receive the play as well as the public, attendance fell and the play closed.

Wilde then returned to England where he lectured. Here, he was reacquainted with Constance Lloyd, who was also an author who he had met in 1881. He proposed to her in 1884. Whenever his wife fell pregnant with their second child, Wilde found himself physically repulsed by her. It was then that he opened to his homosexuality and engaged in relations with Robert Ross.

From 1885 until 1887, Wilde became a critic in The Pall Mall Gazette. He reviewed many topics including art, literature, and life. Influenced by his parents, Wilde was a supporter of Irish Nationalism. He wrote a series in the Daily Chronicle defending Charles Stewart Parnell.

Due to his flair for journalism, he became the editor of The Lady’s World magazine. He renamed it The Woman’s World and added serious articles along with those about fashion and arts. He also included fiction, his wife and mother, Lady Wilde, often writing pieces for it. However, the job soon became tedious and tiresome. It was in 1889, Wilde finally found his passion and flair for writing prose.

In January 1889 he published “The Decay of Lying: A Dialogue” and “Pen, Pencil and Poison”. These were two of his four pieces about aesthetics.

His most prolific work “The Picture of Dorian Gray” was first published on July 1890. This novel was criticised by reviews for its decadence and homosexual allusions. Wilde defended his novel.

Wilde returned to Paris in October 1891. While here, after his success in writing Prose, he returned to his writing of plays. He then wrote his play “Salomé”. It was a tragedy and became very popular both in Paris and London when it was published in both cities in 1893. It was first performed in Paris in 1896.

Wilde through his aesthetic, dress and writings constantly set out to irritate the Victorian society of his time. He continued this aim through his comedy play “Lady Windermere’s Fan” which was first performed in 1892.

Wilde’s final play “The Importance of Being Earnest” hints at his hidden self, a homosexual. The play’s two protagonists have multiple personalities which allow them to escape the society of their time. This play is considered to be Wilde’s masterpiece and was first performed in 1895 in London.

In 1891, Wilde was introduced to Lord Alfred Douglas. They soon became close friends and Wilde became infatuated by him. By 1893 they had an intimate relationship. Douglas introduced Wilde to underground Gay prostitution. This was happening across the country at this time.

However, at this time it was illegal to be homosexual therefore to be a part of this organisation was punishable by imprisonment or even death. He took part in this from 1892 onwards. Unlike his relations with Ross, John Gray, and Douglas, these men were uneducated. His private life was suddenly both different and illegal compared to his public life. In Wilde’s De Profundis he wrote  “It was like feasting with panthers; the danger was half the excitement”

Douglas’ father (the Marquess of Queensberry) suspected that their relationship was more than friends, he then threatened Wilde in June 1894. When “The Importance of Being Earnest” was performed in 1895, his success growing alongside his feud with Queensbury. Queensbury threatened to insult Wilde by throwing rotting vegetables onto his stage. Wilde in response banned him from entering his productions. Not surprisingly, 15 weeks later, Oscar Wilde was admitted to Prison.

Queensbury claimed on the 18th February 1895 that Wilde had participated in Sodomy. However, Wilde alongside Douglas started prosecution against Queensbury for false claims. Queensbury was arrested. He then hired lawyers to find evidence of Wilde’s homosexual activities. Wilde’s close friends advised him to drop the prostitution and flee to France.

Evidence was found and suddenly Wilde’s private relations with Douglas became public news, as was his association with the prostitutes, cross-dressers, and brothels. Wilde’s trial started on 3 April 1895. Due to the mass amounts of evidence against him, it is not surprising that Queensbury was found innocent and Wilde had been arrested and left bankrupt due to the costs of the trial. He was arrested on 6th April 1895. He received daily visits from Douglas.

The prosecution opened on 26th April 1895. Wilde claimed not guilty. With Wilde’s influence, Douglas fled to France and due to fear of prosecution Wilde’s previous lovers also fled. The jury was unable to make a decision and his magistrate, Sir Edward Clarke, was able to offer Wilde and his friends bail. Wilde was freed and he hid from the public at his friends’ house (Ernest and Ada Leverson). On 25th May 1895, Wilde and Douglas were convicted and were sentenced to two years of labour.

Wilde was imprisoned from 25th May 1895 until 18th May 1897. He was first admitted to Newgate Prison in London and then was moved to Pentonville Prison where he endured the labour that he was sentenced to.

At this prison, the prisoners were only allowed to read the Bible and “The Pilgrim’s Progress”. A couple of months later, he was moved to Wandsworth Prison and continued his labour. The conditions of his prison were too much for Wilde and in November he collapsed due to illness and hunger. After this fall he was admitted to the infirmary for two months. When he fell he ruptured his right eardrum, this injury contributed to his death.

The liberal MP, Richard B. Haldane had Wilde transferred to Reading Gaol. During this transfer, Wilde knew he was at his lowest point as the people at the Reading platform spat at him. He spent the rest of his sentence here. While here, he wrote a 50,000-word letter to Douglas. The letter was an evaluation of his life until that point. It was later named “De Profundis”. Wilde was released on 19th May 1897 and then sailed to France. He never returned to the U.K.

Oscar Wilde spent the last three years of his life in exile. He named himself Sebastian Melmoth, after Saint Sebastian. From the hard years in prison, Wilde experienced a spiritual renewal. Therefore, he wrote to the Society of Jesus wanting to attend a six-month Catholic retreat. He also wrote letters to the Daily Chronicle explaining the brutal conditions of British prisons.

During 1897, Wilde spent time with Robert Ross in Berneval-le-Grand. Later, in 1897 he was reunited with Douglas at Rouen. They lived together in Naples for a few months, however, their families separated them by threatening to cut off their funds.

His wife refused to meet him and refused him access to his sons.

On 12th October 1900, Wilde sent a telegraph to Ross saying that he was “terribly weak” and he wanted him to come to him.

Wilde developed meningitis and Ross arrived on the 29th November 1900. Due to his ill health, Wilde was baptised into the Catholic Church. He died on the 30th of November 1900.

Wilde was initially buried at Cimetière de Bagneux. His body was then transferred to Père Lachaise Cemetery in Paris. Robert Ross commissioned for the tomb to be designed by Sir Jacob Epstein. The tomb and its modernist angel is still there today.

Finally, in 2017 Wilde, along with another 50,000 other men were pardoned for their homosexual acts.

Have you read or seen any of Oscar Wilde’s works? Let us know in the comments below!

If you enjoyed reading about the author Oscar Wilde, please enjoy more of our articles about more famous Irish people and places:

Discovering Ireland: An Ultimate Guide to Top 11 Castles in Antrim