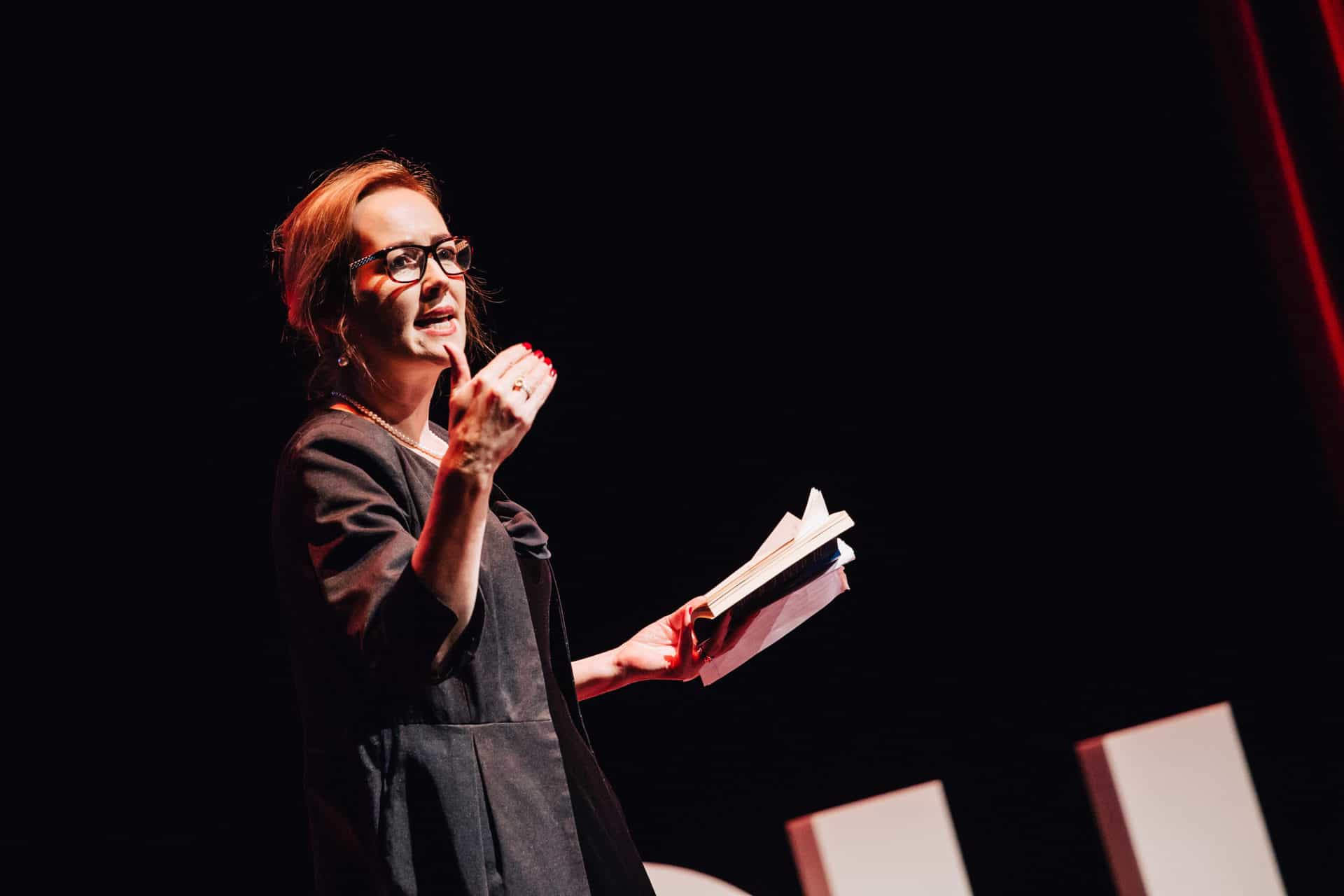 Marina Carr was born in Dublin on 17 November 1964, however, she spent the majority of her childhood at Pallas Lake in County Offaly. Throughout her life the young Marina Carr was always surrounded by the arts as her father was playwright Hugh Carr, he also dabbled in music, and her mother, Maura Eibhlín Breathneach, who was a school principal wrote Poetry in Irish. Therefore it is no surprise that she, along with her siblings, was influenced by the literary arts. Later in her life, Marina Carr studied English and Philosophy at University College Dublin (UCD) and graduated in 1987. In 2011 UCD awarded Carr with an Honorary Doctorate in Literature.

Her career continued in Dublin, where she worked as a writer – in – residence at the Abbey Theatre. While writing here, she also taught at Trinity College. However, through her successful literary career, Carr also travelled to the United States to work. While in the United States she taught at Princeton University and Villanova University. Later returning to Dublin, and she most recently lectured at Dublin City University (DCU).

Carr along with her husband, Dermot Hickey, and her children, live a very busy life. This has shaped her writing and added humour and realism to her literary work.

Marina Carr is considered Ireland’s leading female playwright, she has written and produced many plays known worldwide today. Her most well known are arguably ‘By the Bog of Cats’, ‘Woman and the Scarecrow’, ‘The Mai’, ‘Marble’ and ‘Portia Coughlan’. These plays have been acclaimed and are works of literary genius.

Marina Carr’s ‘Marble’ is part of her book ‘Plays 2’ and is a two-act play that focuses on two married couples and their everyday struggles. It is one of her most famous plays and has been translated into Spanish and was performed in Madrid in November 2016 at the Teatro Valle-Inclan.

By the Bog of Cats

‘By the Bog of Cats’ was first performed in the Abbey Theatre, Dublin, on 7 October 1998. Since its opening, is has been reproduced many times, in many countries. It has reached as far as Brazil and was translated into Portuguese for these performances. ‘By the Bog of Cats’ is a three-act play that contains elements of the supernatural, motherhood, prejudice and betrayal. It is a play about loss and sorrow, however, is full of laughter and fun.

In the first act of ‘By the Bog of Cats’ we first are introduced to Hester who is dragging a dead black swan across the snow at the Bog of Cats, as she is doing this the ghost Francier arrives to collect her however realises that he is early as she is still alive. We quickly learn that Hester’s former love, Carthage, is going to marry another, Caroline Cassidy. Hester begins to dig a grave for the swan and while doing this she talks about how she was abandoned in the swan’s lair by her mother when she was a child. Hester has waited here since she was abandoned waiting for her mother. Following this, in the next scene, Hester is playing with Carthage’s daughter while also speaking with Mrs. Kilbride. Mrs. Kilbride is cheating at cards and talking against Hester’s status and fortune. Before the wedding, Caroline arrives to speak with Hester while wearing her wedding dress. She is asking Hester to allow her to marry Carthage without interruption. Following this visit, Carthage then visits Hester. He is also in his wedding clothes and has the same reason for visiting. Hester refuses to leave the house and insists that she is going to stay there until her mother returns.

Act Two is about Caroline and Carthage’s marriage, which has many interruptions by multiple ghosts and people. The ghost of Hester’s brother arrives to find out why Hester killed him, Mrs. Kilbride arrives wearing a white dress pretending to the bride of her son, and Mrs. Kilbride interrupts the bride’s father’s speech to talk about her son. Finally, Hester arrives at the wedding, wearing a wedding gown, the dress that Carthage bought her for nine years previous. After being forcibly removed from the party, Hester swears revenge against them all.

The third and final act is full of revenge, death, and destruction. We watch as Hester walks away from her burning house along with her ghost brother, Joseph Swane. We discover that she did not kill him for money, but because she was jealous of the relationship he had with their mother. She also reveals that Carthage took all of his money to buy land and then left Hester for Caroline. Monica arrives again and begs Hester to leave the house after she burned the house down and ruining the wedding, however, Hester is still waiting for her mother. Carthage arrives outraged and the pair fight, Carthage threatens to take Josie away from Hester and to declare her an unfit mother. In the end, ghost Fancier visits again to take Hester. Josie begs Hester not to leave her, so Hester kills her by slitting her throat to spare her the loss she herself had through living a motherless life. The ghost Fancier performs a death dance with Hester and then stabs her in the chest to kill her.

By the Bog of Cats Quotes

“that child…will live as long as this black swan, not a day more, not a day less”

“I can’t lave till me mother comes. I’d hope she’d have come before now and it wouldn’t come to this. Don’t make me lave this place or somethin’ terrible’ll happen” – Hester at the Wedding

“Ya think I slit your throat for the fewauld pound me father left me?” Hesther to her brother

Marina Carr’s ‘Woman and Scarecrow’ was first staged at the Royal Court Jerwood Theatre in London in 2006 and later opened at the Irish Repertory Theatre in Newyork in May 2018. ‘Woman and Scarecrow’ is a two-act (2 hours and 20 minutes long) play containing five characters: Woman, Scarecrow, Him, Aunty Ah, and Thing. None of the five characters have names, they are only referred to by these pronouns.

This short play focuses on a dying woman and her final hours on earth and her time reflecting on her life. The woman is often portrayed as lying in bed, and the only other piece of the furniture mentioned is a wardrobe, which seems to have a supernatural element lurking within it. The mysterious presence within the wardrobe is alluded to be death, symbolising its closeness and imminent approach. While the woman is reflecting on her life, we learn that her role was always to be a mother and wife, she had eight children, however, the ninth died. We also learn that her husband was not faithful to her and that regardless of this she remained dependant on him. We also learn that her life was not a happy one when she was born her mother died and she was raised by her cruel aunt. She then married, and this marriage was not a happy one. However, throughout her life there were times she was strong and independent, for example, she refused to wear her wedding ring to the grave, and she also engaged in affairs. This independence is also shown when she dies as he is not in the room with her – freeing her from her miserable life.

Throughout the play her companion was the Scarecrow – this may have been a figment of her imagination created from the morphine. This scarecrow seems to be in charge of keeping the ‘death’ figure in the closet at bay.

“We don’t belong here. There must be

another Earth. And yet there was a moment when

I thought it might be possible here. A moment

so elusive it’s hardly worth mentioning . . .”

“Walking is no longer an option. He’s waiting in the wardrobe. Can’t you hear him sucking his oily wings?”

Marina Carr’s ‘The Mai’ was one of her plays produced at The Abbey Theatre and was first performed on 5 October 1994. This play focuses on a family that contains four generations under one roof. The central figure is The Mai, a 40 – year – old woman who is struggling to save her marriage and the happiness of her family. A central focus of this play is how history repeats itself in a never-changing cycle. The narrator is the daughter, Millie, giving a nonbiased story about the family. The theme of folklore is apparent as Millie shows interest in Owl Lake. Folklore is common within Marina Carr’s plays.

The first act of ‘The Mai’ is set during the summer of 1979 and opens with the absentee husband and father returning after five years, hoping for a second chance. Throughout the play, The Mai struggles with keeping her marriage alive, while her husband, Robert, consistently cheats. Eventually, The Mai admits to her daughter, the narrator, that she cannot see a happy, peaceful life with Robert.

The second act of ‘The Mai’ is set years later, and we see the outcome of the relationships from the first act. Learning, that the past will always repeat itself. From the play, we learn that the wives will always put their husbands before their children. There are also many links from marriage to capitalism when women lose their husbands, they lose everything.

Marina Carr’s ‘Portia Coughlan’ was first produced by the Abbey Theatre, Dublin, on 27 March 1996. This play contains themes of love and friendship, however, is also full of grief and despair.

This play follows the life of Portia Coughlan who is living a happy life with her wealthy husband and three sons. However, she is grief-stricken by the death of her twin brother. The play opens on her 30th birthday, 15 years after the drowning of her brother, Gabriel. Due to the haunting from her brother she is unable to be a good mother or wife. She has a drinking problem and drinks brandy throughout the day. The play ends with Portia taking her own life in the same way her brother died, she drowns herself. Her ghost brother consumes her life to the point that she can no longer live.

‘Portia Coughlan’ mirrors aspects of ‘By the Bog of Cats’. Both Hester and Portia Coughlan are haunted by their dead brothers, they both drink a lot of alcohol and are feisty characters.

Marina Carr’s ‘Portia Coughlan’ is still popular today and is playing in The Vic, London, in September and October 2020. This production is being directed by Caroline Byrne, and you can buy tickets here.

Lady Gregory is one of Ireland’s celebrated dramatists from the Irish Literary Revival and a co-founder of the Abbey Theatre. Today, Marina Carr’s plays have been performed in the Abbey Theatre and contain themes similar to that of Gregory’s. Their plays are similar in terms of poetic language, story and female characters. Marina Carr also draws upon Irish folklore like Gregory did, such as ‘The Golden Apple’ which was published in 1916 and ‘The Full Moon’ which was published in 1913.

Throughout Marina Carr’s successful literary career, she has received many awards. She was made a member of the Aosdána, an Irish association of artists.

Marina Carr also won the 1998 Irish Times Playwright Award and the 2001 E. M. Forster Award from the  American Academy of Arts and Letters and the American/Ireland Fund Award which included a $20,000 award. She also received the Maccauley Fellowship and Hennessy Award, and the 2016 Windham – Campbell Prize from Yale University which included a financial award of $165,000. She was the second Irish author to receive this prize from Yale University.

Have you watched any of Marina Carr’s amazing plays onstage? Tell us about your experience in the comments below!