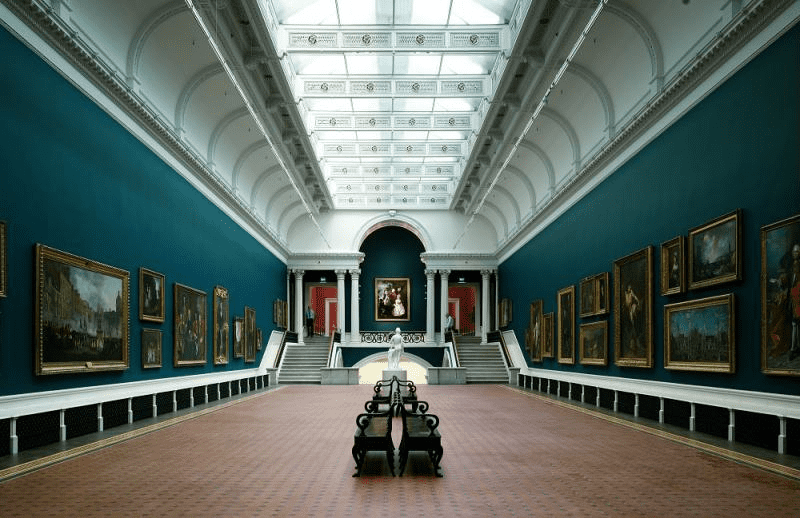 Although trips to Ireland usually focus on the natural beauty of its landscape, its history, its music and dance, and its recreational alcohol culture, it houses many art museums and galleries that demonstrate the imaginative talent of its homegrown artists and the work of artists from around the world. These include must-see well-knowns and local, hidden gems.

The National Gallery of Ireland is perhaps the most well-known and popular art gallery in Ireland. Founded in 1854 and opened to the public in 1864, it was formed by William Dargan, the father of the Irish rail system.  He hoped to imitate Crystal Palace in London’s great exhibition which had ceased in 1853. Public response was open and enthusiastic, demonstrating a craving for art in Ireland. The Gallery has been open to the public ever since and is considered one of the best art museums.

The National Gallery of Ireland currently has over 14,000 artworks, including 5,000 drawings, 2,500 oil paintings, 5,000 prints, as well as photographs, sculptures, furniture, metal and glasswork. They have an extensive collection of Irish artworks, including a Yeats collection – this collection includes works from Jack B. Yeats (1871 – 1957), artist, Olympian medallist and brother of renowned poet W. B. Yeats (1865 – 1939), and their father John Butler Yeats (1839 – 1922). The National Gallery of Ireland also has a wide range of European artworks from Spain, France, Italy, German, Switzerland, and the Netherlands. Some of their most prized possessions include A Ship against the Mewstone by J. M. W. Turner (1775 – 1851) and Landscape with the Rest on the Flight into Egypt by Rembrandt van Rijn (1606-1669).

Their mission statement is ‘to care for, interpret, develop and showcase art in a way that makes the National Gallery of Ireland an exciting place to encounter art.  We aim to provide an outstanding experience that inspires an interest in and an appreciation of art for all.  We are dedicated to bringing people and their art together’. They specialise in art conservation and curation, which involves research and exhibiting the works in their collection. They also provide an all-embracing archive library available for supporting art history research.

Crawford Art Gallery, known by the locals as The Crawford, is a public art gallery and museum in Cork. It is housed in Cork’s stunning red-bricked former Custom House building, constructed in 1724. In the 1830s it was the Royal Cork Institution, a space for scientific works and a museum for old stones and manuscripts, before being renamed the Crawford School of Art in 1885. The school was active for over a century before moving to a new location in 1979, enabling the building to become an exclusive gallery and museum.

The Crawford is a fascinating blend of the old and the modern, their 3,000 strong collection featuring works that embrace the style of the ancient Greeks and Romans – including sculpture casts by Italian Neoclassical artist Antonio Canova acquired from the Vatican Museum in Rome in 1818 – to contemporary video art.

The gallery is home to a wide range of art by Irish and European artists, but they particularly prize works completed by former students of the Crawford School of Art. These include works by Henry Jones Thaddeus (1859 – 1929), realist and portrait painter, and William Gerard Barry (1864 – 1941), and even a former headmaster, James Brenan (1837 – 1907). One of the most prolific artists of the nineteenth century, Brenan specialised in recording Irish provincial life, and became the headmaster of the Crawford School of Art in 1860.

The Irish Museum of Modern Art, otherwise known as IMMA, is Ireland’s hub for modern and contemporary art. Relatively new, it was established by the Irish government in 1990 and opened to the public in 1991. It is housed in a 17th-century building that formerly served as the Royal Hospital Kilmainham, a historic Irish site.

Modern and contemporary art, understood in this context, refers to works of the present day and the recent past. IMMA, in particular, focuses on artwork from the 1940s to today. The Irish Museum of Modern Art currently houses over 3,500 pieces of art in various mediums. Their website states that their collection is ‘firmly rooted in the present and important contemporary works are added each year’.

The Dublin City Gallery The Hugh Lane, better known as Hugh Lane Gallery, is an art gallery run by the Dublin City Council. Formerly the Municipal Gallery of Modern Art, Hugh Lane Gallery is housed in the historic Charlemont House, built in 1763 for the 1st Earl of Charlemont, James Caufield. The gallery was founded in 1908 and is the first known gallery of modern art in the entire world, making it a significant stop for art lovers and art historians.

The gallery’s collection is mostly modern and contemporary art, as well as additions from Irish artists. They showcase a unique stained-glass room which, according to their website, ‘remarkable and ever popular Harry Clarke piece The Eve of St. Agnes and the recently acquired ‘Mr Gilhooley by Liam O’Flaherty’ for the Geneva Window, 1929, by Clarke. The room also features work by Wilhelmina Geddes, Evie Hone, Paul Bony and James Scanlon’. Their room dedicated to the work of abstract artist Sean Scully is also popular.

The most famous part of their collection relates to Francis Bacon, an Irish-born British artist whose works depicted intense, emotionally charged, and raw images. In 1998, the Hugh Lane Gallery secured the rights to Bacon’s art studio, and it was moved from its home in London to the Gallery. Opened to the public in 2001, it is an exact replica of Bacon’s workspace, and a catalogue of every item is featured in the Gallery’s online database.

This small gallery is a hidden gem in Ireland’s County Kerry, exclusively featuring the work of Irish artist Carol Cronin. Carol works mostly with oil paint on canvas to portray the natural and sublime beauty of the sea: according to her website, her paintings ‘capture the power and ever-changing moods of the Atlantic Ocean and the rugged West Kerry coast’.

Carol’s work has been exhibited around Europe, including Dublin, London, Paris, and Dusseldorf.  It is greatly influenced by her Irish heritage and her time living in the Netherlands. She has been commissioned several times by places wishing to showcase her work, including The National Archives of the Netherlands and University College of Cork.

Carol opened The Carol Cronin Gallery in 2005 as a permanent home for her art.

The Jorgensen Art Gallery in Dublin was originally established by IB Jorgensen, one of Ireland’s top fashion designers, on the upper floor of his fashion salon on Molesworth Street in Dublin in 1992. After expansion and several moves, the Gallery now spans the entirety of a beautiful Georgian building. Now one of the most popular fine art galleries in Ireland, The Jorgensen Art Gallery showcases paintings and sculptures from modern and contemporary Irish, British, and European artists.

The Gallery is home to works of significant contributors to Irish art, including Impressionist landscape and portrait painter Walter Osborne (1859 – 1903), Sir John Lavery (1856 – 1941) who was best known for his raw depictions of war, William Scott (1913 – 1989), the most celebrated 20th-century Ulster abstract and still-life painter, and Mary Swanzy (1882 – 1978), one of Ireland’s first abstract artists to experiment with and master the likes of cubism, futurism, and orphism.

The Jorgensen Art Gallery is also unique in that it sells a wide-ranging selection of antique furniture, vases, lamps, and collectables.

The Olivier Cornet Gallery, located in The Wooden Building in Temple Bar, was opened by French-born artists’ agent, fine art consultant, and independent curator Olivier Cornet in 2005. It was established because Olivier wished to have a permanent display space for the Irish art exhibitions he had organised and curated in the past.

According to their website, Olivier Cornet Gallery’s collections ‘represents a small group of very accomplished contemporary artists, working in a variety of media such as painting, sculpture, ceramics, fine prints and photography’. They encourage an open and informal environment for experts and amateurs alike. Their exhibitions often showcase the work of individual local artists, as well as themed, collaborate exhibitions such as Drawing on Joyce, celebrating Irish writer James Joyce, and Concerning the Other, where ‘ten contemporary artists working together on one hundred pieces of art, to promote diversity and concern for minorities in these days of mounting racism and intolerance’.

The Doorway Gallery is a small, independent gallery in Dublin. Their collection features fine art from Irish and international artists, and their main aim is to encourage individual artist recognition: ‘the primary focus of the Doorway Gallery is to support artists in achieving international recognition for their work.  This is achieved through their presence at a number of annual international art fairs at which a selection of artworks is promoted. There is an independent ethos to The Doorway Gallery. Patrons are encouraged to develop their own concepts in appreciation of art.  This is evident through the gallery’s regularly hosted ‘Solo Shows’.  Such events are organised in an effort to promote the artist.’

The Doorway Gallery exhibits art in a variety of mediums, including canvas oil paintings, pencil drawings, and sculptures. Their main style of exhibition is an intimate ‘Getting to know’ approach, encouraging local artists to reveal both their well-known works and previously unseen art.

Opening times: closed Mondays, Tuesday – Saturday 12.00noon–6.00pm, and Sunday by appointment only
Located on the historically named ‘Gas Lane’, now known as ‘Spoutwell Lane’, The Chimera Gallery in Mullingar was established by David O’Shea and Hazel Revington Cross in 2014, alongside The Purple Raven Gallery. The Chimera Gallery is a small gallery dedicated to showcasing what is unique about Irish art and supporting new up-and-comers in the business, most of whom are painters.

Still in its infancy, having opened only six years ago, The Chimera Gallery is slowly but steadily building its collection. One of its leading exhibitions is French artist Nick Lighten, who is debuting his art in Ireland for the first time at The Chimera Gallery. Lighten’s art is strongly influenced by ‘street art and pop art’ and his career ‘for 20 years as a photographer, art director and motion designer’.