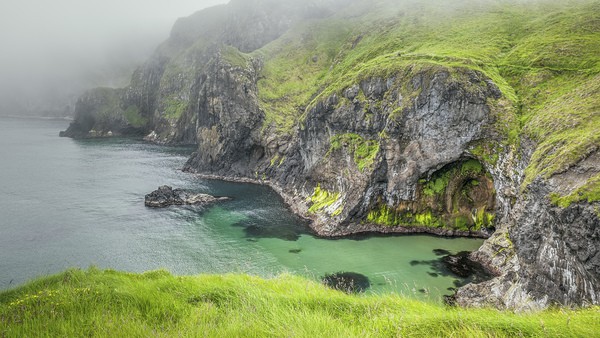 The Emerald Isle has been a historical and religious beacon throughout history. Ireland has been the origin of the worship of numerous Gallic deities, a cradle of Christianity, and the final resting place of its patron saint and one of the world’s most famous saints, St. Patrick. The island holds between its mountains, valleys, and folds some of the most solemn holy places in the world.

Northern Ireland is home to several world-renowned churches, such as St. Patrick’s Church, St. Michael’s Church, and the Lisburn Cathedral. The holy places we’ve selected are located in all counties of Northern Ireland, and while the majority lies in ruins today, they still tell solemn and heroic stories of their residents.

The Most Popular Holy Places in Northern Ireland

Downhill Demesne or House and Mussenden Temple constitute a holy place in Downhill, near Castlerock in County Londonderry. The House was commissioned to be built in the early 1770s by Frederick Hervey, the 4th Earl of Bristol and Bishop of Derry. Leading to the House was the Lion’s Gate, which was replaced with the Bishop’s Gate in 1784. Following the death of Hervey, the estate was passed down to his cousin, Rev. Henry Bruce, who commissioned the building of the Mussenden Temple as a memorial of his sister, Frideswide Mussenden.

The Mussenden Temple is distinguishable by its circular design overlooking the Atlantic Ocean. Construction followed the model of the Temple of Vesta in the Roman Forum in Rome. It was once full of books that Lady Mussenden could retire to when visiting the Earl of Bristol. As time went by, the ocean caused deep soil erosion and brought the temple more to the edge.

Downhill House suffered severe damage after the 1851 fire, and while restoration works continued well through the 1870s, the house eventually fell into disrepair after WWII. During the 1940s, the temple became a trust property, and the house followed in 1980. In 2007, the temple obtained a licence to hold civil wedding ceremonies.

The holy place of Dungiven Priory in Derry was a 7th-century Celtic monastery established by St. Neachtain. The priory continued its work until the O’Cahan Family, a family of Augustinian Canons, took over the monastery in the 12th century. The tomb visible in the 13th-century chancel belongs to an O’Cahan chief called Cooey-na-Gall O’Cahan. However, O’Cahan died in the 13th century, and the lavish decorations on his tomb date to the 15th century.

The priory’s location is currently in ruins, though some distinctive features of the building stand still. Some of these ruins include the north and south walls of the exterior east wall of the building; a pointed door and window that are rounded from the outside appear on the nave’s north wall; and the carvings on O’Cahan’s tomb of the six gallowglasses indicate a Scottish carver created them.

Another visible feature of the priory is the graveyard, where there’s a massive rag tree, with rags still hanging to this day. Sir Edward Doddington had the priory remodelled when he took over the land, in 17th-century style, to become his home. No visible ruins are left from this House except for some foundations discovered after an excavation initiative in 1982.

The Aughlish Stone Circles is a holy place with six stone circles, in addition to two stone rows, in the land of Aughlish in County Londonderry. These Bronze Age formations have varied stone numbers; one of them has 41 stones with a 150 cm high stone north of the circle and another one to its south, while another circle stretches for 18 metres.

Archaeologist Aubrey Burl believed the stones were a part of the people who lived around the Sperrins, which are the hills surrounding the area. The stones look as if they were aligned to the moon, and some were in the direction of the Goles Stones in the Glenelly Valley, another alignment that is situated to face the moon. The circles might seem hard to find as you venture into the surrounding area, but when you’re there, you can feel and imagine the rituals performed there.

Inch Abbey was built on the outskirts of Downpatrick on the ruins of an older 9th-century monastery. John de Courcy, an Anglo-Norman knight, built this holy place in compensation for destroying Erenagh Abbey. De Courcy established Inch Abbey in the 12th century as a Cistercian monastery. The River Quoile once surrounded the current abbey, which inspired its name from the Irish word “inis”, which means island.

Grey Abbey is located in the eastern part of the Greyabbey village in County Dawn. The remaining buildings of this holy place, including the church and the remaining buildings of the south, are another testament to the Anglo-Norman architecture in the area. Affreca de Courcy, John de Courcy’s wife, ordered the abbey construction in the 12th century.

The abbey suffered from decay by the end of the Middle Ages and went out of work in the middle of the 16th century. However, when Sir Hugh Montgomery took over in the early 17th century, he restored the abbey and refurbished the nave, which distinguished the abbey until the end of the 18th century.

A monastery existed on the location of the current abbey before 640, where St. Laiseran founded this holy place and old medieval monastery. The current ruins of the Priory Church are Anglo-Norman Augustinian ruins that date back to the last years of the 12th century and the beginning of the 13th century. During the 15th century, the church underwent several renovations, such as replacing the east window, rebuilding the west end, and giving it a new entrance.

The Holywood Priory Church served the faithful until King Henry VIII dissolved it on New Year’s Day in 1541. He granted the church’s lands to the O’Neill Family, which later passed to the First Viscount Clandeboye, Sir James Hamilton. The current church tower dates back to the beginning of the 19th century. There’s a graveyard by the ruins that hold the remains of many renowned people, such as the educational reformer Dr Robert Sullivan and mathematician Sir Joseph Larmor.

Rory MacQuillan established the Bonamargy Friary in the late 15th century to serve as a holy place on the way to Ballycastle. The name of the friary, Bonamargy, means “the foot of the Margy River”, which was formed by joining two other rivers, the Cary River and the Shesk River. The Franciscan-style complex contains a gatehouse, workroom, store, dormitory, and church.

Bonamargy Friary holds the remains of many famous characters. Such as several Earls of Antrim, Sorley Boy MacDonnell, a Scoto-Irish chief and his grandson, the 1st Marquess of Antrim, Randall, whom history books mention for his role in the War of the Three Kingdoms. The most famous and controversial character buried at the friary is Julia MacQuillen, a 17th-century prophet also known as the “Black Nun”. She had wished to be buried by the entrance so the visitors would tread on her grave, but she was buried at the church’s west end.

St. Patrick’s Well, or Tober Patrick, is a holy place on the old pilgrimage to the Lough Derg in County Donegal. History mentions St. Patrick rested at the well after a Lenten Sacrifice in Lough Derg. Every year, on St. Patrick’s Day, many locals celebrate these events, and some even believe that water from the well can help subdue toothache. Nearby, there’s an area known as the “Plain of the Church”, which is believed to have been the site of a Franciscan church called St. Caireall’s Church.

Archbishop Patrick O’ Scannail founded the Armagh Franciscan Friary in 1263/64. The Franciscans played an integral role in the Armagh’s religious development until the friary was dissolved, along with all monasteries by order from King Henry VIII. Despite attempts to continue religious practices afterwards in this holy place, the complex’s buildings were repurposed for welfare and later abandoned by the 1600s.

The land holds two empty graves and recesses of notable characters such as Gormlaith O’Donnell, Domhnail O’Neill’s wife, indicating this place’s significance back in time.

The churches suffered significant damage from the Vikings in 923 and again when a strong wind blew from the north in 1146, causing damage all over the north along the way. Killevy Churches served as a convent for over 1000 years, even during the Augustinian era, until King Henry VIII dissolved all monasteries. The last abbess of the convent was Alicia O’Hanlon.

History mentions several stories about miracles taking place at Killevy Churches. When the fourth abbess, Derlaisre, was building a wooden church, she tried to carry a long timber, but it was too heavy for her. Derlaisre left the wood in its place and spent the rest of the day praying for St Monnine’s help. When she woke up the following day, she found the timber was miraculously moved beside the church where she was working.

As we’ve seen through this article, these holy places represent an integral part of Irish history, written with the devotedness and sacrifices of the monks, priests and priestesses who chose to serve a higher message.

8 of the Oldest Civilisations in the World