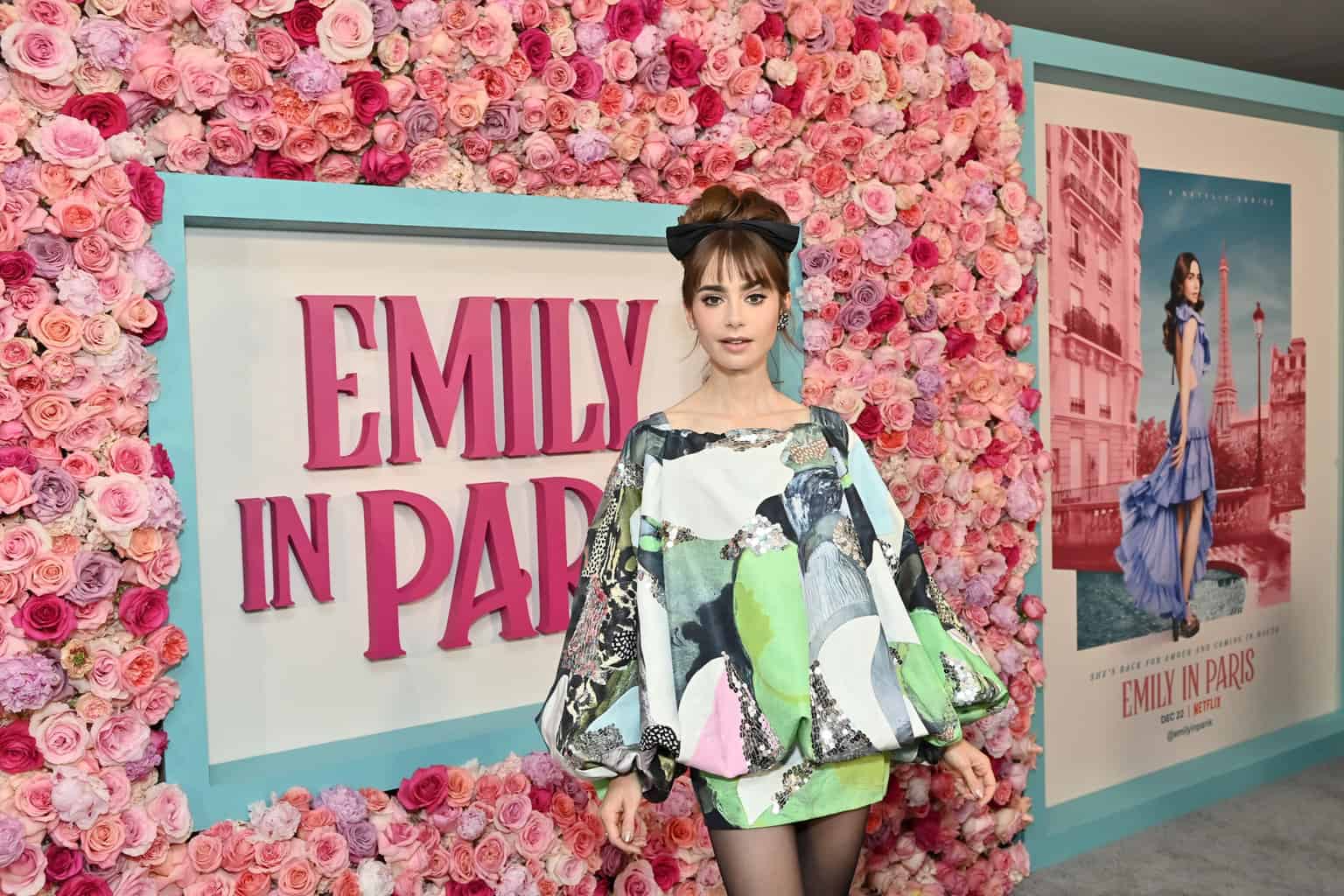 Emily in Paris has quickly climbed up the rankings on Netflix, with its most recent season accumulating over 117 million hours of viewing time. The romantic comedy follows the life of the young marketeer, Emily Cooper, who, on a spur-of-the-moment decision, decides to take a new job opportunity, moving from her home in Chicago to start a new life in Paris.

Emily in Paris provides a sense of whimsical escapism for its Netflix viewers, giving us the picturesque views of Paris city, with scenes depicting its famous landmarks and impressive Haussmann and gothic style architecture. Whether you have visited Paris or not, you’ll be able to appreciate the show’s location as they do a brilliant job of promoting the beauty of Paris.

What is Emily in Paris about?

Emily in Paris is about the life of Emily Cooper, an ambitious young woman who has decided to start a new life in Paris upon taking an unexpected job opportunity. The show follows Emily as she makes strategic decisions about her career in a marketing agency, but in her personal life, decisions are led with the heart, where she finds herself caught in a love triangle.

Emily in Paris is a story that’s filled with drama, romance and light-hearted humour. Albeit, sometimes over the top (particularly in regards to how easy marketing supposedly is) this easy-watch comedy provides lots of laughs filled with intriguing dilemmas and interpersonal conflicts.

Who plays Camille in Emily in Paris?

Camille in Emily in Paris is played by the French actress Camille Razat. Razat is a talented actress and is noted for her roles in The Accusation, Mastemah, (Girl) Friend and The Disappearance.

Who plays Emily in Paris?

British and American actress Lily Collins plays the main character Emily, in Emily in Paris. She is the daughter of the famous British singer Phil Collins and noted for her acting roles in The Mortal Instruments, Inheritance and Love, Rosie.

Who plays Alfie in Emily in Paris?

Alfie is played by British actor Lucien Laviscount. He is said to be a rising star with notable roles in famous T.V. shows and movies, including Snatch, The Bye Bye Man, Supernatural and Skins.

Who plays Gabriel in Emily in Paris?

Gabriel is played by French actor and model, Lucas Bravo. Some of his notable roles were in Ticket to Paradise, Smart Ass and The Honeymoon. Interestingly, in his days before acting and modelling, he also worked as a sous-chef.

Who plays Mindy in Emily in Paris?

The character Mindy is played by Ashley Park, who is an American singer, dancer and actor. Ashley has an impressive repertoire and has also starred in Girls5eva, Tales of the City and Ghosts of Hiroshima.

Season 1 of Emily in Paris was first released in October 2020, and quickly became a guilty pleasure for many Netflix viewers. In Case you’ve forgotten, here is a season 1 recap in bullet points:

Emily takes on a new job.

Emily and the love triangle

Season 1 of Emily in Paris is filled with drama, romantic dilemmas, light-hearted humour and perhaps at times, unrealistic depictions of the marketing world.

Season 2 of Emily in Paris is equally as drama-filled as season 1, picking up where the last season left off, where we see the consequences of Emily’s actions.

Emily’s breaks up with Mathieu

Emily’s messes up her career, again

Alfie comes onto the scene

The most recent season of Emily in Paris has left fans shocked as the storyline increasingly becomes more entangled, with new revelations that lead Emily to make tough decisions in her personal and professional life.

Season 3 is probably the most exciting season of Emily in Paris. We are left wondering if Gabriel and Emily will make it together, how will the new baby affect their relationship? and what drama lies ahead between Mindy and Nicolas’ new romance.

Will there be a season 4 of Emily in Paris?

Although it hasn’t been officially confirmed, Netflix did renew the show for seasons 3 and 4, which were apparently filmed back-to-back. Given the release date of previous seasons, we could take an educated guess that Season 4 will return to our screens before the end of 2023, usually around October – December time.

Is Emily in Paris filmed in Paris?

Emily in Paris is filmed throughout Paris and its surrounding suburbs. It would be pretty difficult to call a show Emily in Paris without providing viewers with the jaw dropping scenery, stunning architectural design and historical locations of one of the most beautiful cities in the world.

The T.V. show includes many stunning backdrops that almost distract the viewer from the progressing storyline. In particular, the 5th arrondissement and the 1st arrondissement are used for the show’s setting, giving viewers a glimpse into some of the most beautiful parts of Paris.

Are you visiting Paris soon, or just want to see more of one of the most beautiful cities in the world? Check out this 24 Hours in Paris article.

Where was Emily in Paris season 1 filmed?

Right from the it’s initial release in October 2020, producers made it clear to viewers that Paris iconology would become the show’s backdrop. Here are some of our most favourite filming locations in season one of Emily in Paris.

Place de l’Estrapade is an idyllic square located in the 5th Arrondissement of Paris, or more commonly referred to as the Latin Quarter. This location became the setting of Emily’s apartment block, her neighbour Gabriel’s restaurant and their local bakery La Boulangerie Moderne.

Check out this article, Wonders of the 5th Arrondissement, for more sightseeing inspiration and historical context of the Latin Quarter, Paris.

Place de Valois is referred to as the ‘secret courtyard’ by locals living in the city, located in the 1st arrondissement of Paris, which isn’t far from the Louvre museum. This location became the setting for Emily’s workplace, the french marketing agency Savoir and the nearby Bistro, Bistrot Valois became the setting for many scenes of after work socialising.

Interested in seeing more of the iconic landmarks near Paris’s 1st arrondissement? Check out this article of the famous, historical building that is now home to the department store La Samaritaine.

In season 1, Emily attended an opera in the iconic and extravagant location of the Palais Garnier, named after its architect and designer Charles Garnier. The building is flourished with elegant embellishments, gold tapering and opulent design. Nearly 150 years old, the building has never gone out of taste, becoming an architectural masterpiece of Napoleon III style.

Check out this article if you want to hear more about the design and historical context of the jaw-dropping Palais Garnier opera house.

Le Grand Véfour is the oldest restaurant in all of Paris, which has stood in the same spot for over 200 years. In season 1, Emily attempts to organise a work dinner in this beautiful, historic location that’s embellished with art depictions and extravagant designs. It is a real restaurant and Michelin star rated, so if you get the chance to visit Paris, stopping by here is a must.

Check out this article for the top things to do in Paris, which gives more suggestions for places to eat and drink around Paris.

Where was Emily in Paris season 2 filmed?

Emily in Paris Season 2 still heavily focuses on Paris iconography but reaches out a little bit to scenes set in the beautiful location of the French riviera. Check out my favourite filming locations in season 2.

In season 2, Emily takes a vacation to the St Tropez Hotel, which is actually set in the Grand Hotel Du Cap-Ferrat Four Seasons, located in the French riviera. This stunning filming location rests on the coast and offers jaw-dropping sea views that will have you immediately booking a flight to visit it.

If you’re visiting the French riviera anytime soon, be sure to check out some nice things to do in Nice.

Many of the scenes in season 2 of Emily in Paris, are set in the Le Marais district of Paris, located across the 3rd and 4th arrondissement. This area offers picturesque backdrops of boutique shops, historical buildings and charming, quaint streets.

If you’re planning on visiting Le Marais district, be sure to check out the oldest square in Paris, Place Des Vosges.

In the season 2 episode, “Birthday” Emily visits one of the most famous cemeteries in the world, the Pere-Lachaise cemetery. This spot is the first garden cemetery to be constructed and the final resting place of many famous celebrities, including Jim Morrison and Oscar Wilde.

In the season 2 finale episode, “The French Revolution”, Emily visits the Jardin du Palais Royal. This location was once the 17th century medicinal garden and throughout history has gone through major growth, with museum’s and zoo’s being added to its grounds.

The Jardin du Palais Royal is the home of French history and culture and mostly definitely worth the visit, no matter the time of the year.

Where was Emily in Paris season 3 filmed?

In Season 3 of Emily in Paris, we see Emily return to Paris and make strategic decisions regarding her career. The storyline is again set against the beautiful backdrop of Parisian cultural and historical landmarks.

The Eiffel Tower is probably the most iconic landmark of Paris, featuring in Emily’s dream sequence, the dinner scene and popping up in lots of other shots throughout all three seasons of the show.

If you’re planning on visiting Paris, then checking out the Eiffel Tower is an absolute must.

In season 3, viewers are treated to scenes of the Palais Galliera, for Pierre Cadault’s fashion show. This spot is the perfect filming location as it is a real iconic museum of fashion, that honours french fashion and fashionistas throughout the decades.

The Quai des Célestins is an iconic spot where Emily performs a romantic gesture for her at the time boyfriend, Alfie. Located near the 4th arrondissement, this spot features a running river, which looks amazing in the nighttime scene, where the light bounces off the sparkling water.

Inspired by Emily in Paris

If you’re inspired to visit Paris after watching the hit T.V. show Emily in Paris, then we can’t recommend visiting enough, it looks just as good as the show portrays, if not even better. From famous landmarks like the Arc De Triomphe to how special the city looks at Christmas time, Paris is a must for a memorable city trip.

Check out the recent posts on the ConnollyCove Instagram account, that shows the beauty of Paris, you’ll probably end up saving them all!

Best 12 Things to do on the Faroe Islands: A Beautiful Vacation Destination