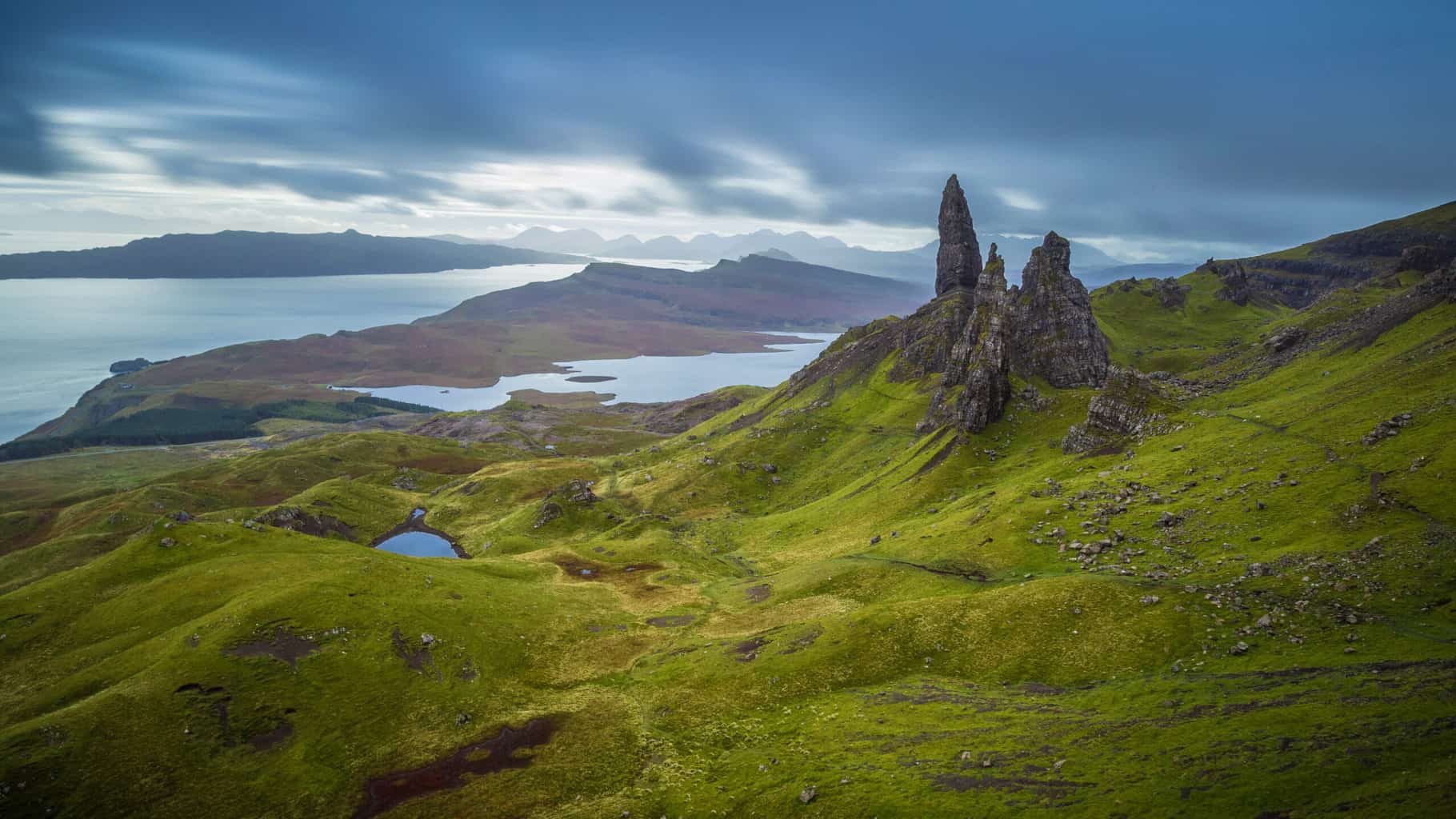 Scotland is the land of great bagpipes, exquisite whisky, amusing music culture, and most of all, an unimaginable beauty. When it comes to natural charm and scenery, Scotland is second to none; mountain ranges with some killing rolling hills, spectacular lakes scattered all over the woodland, and picturesque parks waiting to be discovered.

The Scotland parks are dramatic, wild, and free and have an irresistible grace admired by all nature lovers. There are various birds and mammals in most Scotland parks, including some rare ones. In addition to nature reserves that vary in size and location, some are of international importance.

Regardless of the season, Scotland parks are all dressed up and ready to delight the hundreds of thousands of tourists who come here every year.

But which Scotland parks are worth visiting? Here’s our fine selection of the most outstanding Scotland parks you should add to your bucket list. Let’s dig in!

The park was opened in 2002, and it has 21 mountains higher than 914.4 metres, more than 20 lakes, 50 rivers and two forests. The park’s diversity is a magnet for nature lovers and outdoor enthusiasts. Walking, cycling, mountaineering, water sports, and horseback riding are all available within the park.

Many animals take the park as their home, including deer, red and grey squirrels, badgers, hedgehogs, and bats. But that’s not all; there are also many villages within the park with historic buildings, other tourist attractions, and shops.

Stretching for miles, the marshes that make up most of Cairngorms National Park are the perfect place for tourists who want to immerse themselves in Scotland parks’ solitude and isolated charm.

The enormous granite massif of Cairngorms rises above the surrounding lowland, with panoramic views over the park from above. You can see Snowdonia and the Lake District glistening on the horizon.

The park is popular with rock climbers, who use it to hone their skills, and bird watchers, who find plenty of birds to choose from.

Highland is a wonderful example of the Scotland parks where you can enjoy relaxing both your mind and body. The undisturbed surroundings and wildlife present a perfect escape from the city’s noise. Besides enjoying its captivating nature, you will see grouse in their natural habitat, in addition to seals, dolphins and otters, which you can see from the shore or by taking a boat trip.

If you’re not a keen nature lover, there are outdoor activities too, like snowboarding, skiing, mountain biking, or rafting on the river.

If you’re staying nearby the park, don’t miss the chance to catch one of the events the locals organise there. Fairs, festivals, relay races, or a game of chess, there is so much to choose from how you’d like to spend your day in Highland.

Moreover, the abundance of fertile land, clear water, and fresh air makes this part of Scotland particularly enjoyable for foodies. The local seafood (fish, lobster, clams, salmon, and trout) is world-famous for its special taste. Make sure to grab something; the taste is like no other!

One of the most lovely Scottish parks is Glen Affric National Nature Reserve, which boasts a fantastic variety of landscapes: woodland glens, rugged mountains, wild rivers, and streams.

Additionally, the park has a series of wondrous trails along the banks of the Affric River; adventurous hikers can venture into these trails to explore the depths of the mountains.

As if the park doesn’t have enough going on, there are also charming pine trees guarding the surroundings of the local lakes. In Glen Affric National Nature Reserve, peace and tranquillity reign all around; what more could we ask for?!

The Beinn Eighe and Loch Maree

One of the most breathtaking Scotland parks located in the northwestern Highland, Loch Marie, consists of five large wooded islands in addition to more than 60 smaller islands, many with their lakes. The islands of Loch Maree are home to Caledonian pine forests, Scotland’s finest.

The islands and shoreline of Loch Maree are protected and regarded as a National Nature Reserve. Among the wonders of Loch Maree is the mountain Slioch on the north side of the Loch. The mountain is over 981 metres high, and it rises above Kinlochewe.

The park is a popular spot for hill walking, climbing, and scrambling. Thanks to its unique wildlife, Loch Maree holds a special international significance.

This is one of the long-lived Scotland parks founded in 1670, and its main aim was to grow medicinal plants. At that time, it was a small garden, but today this major plant centre is divided into four branches across Scotland, each specialising in a different subject.

The Royal Botanic Garden Edinburgh, second only to Oxford, has over 13,000 plant species worldwide. Administration buildings, science centres, and huge greenhouses are in the north and west parts of the garden. The botanic garden is not only a tourist destination but also an active centre in research, studying the characteristics of plants.

Queen’s park is one of the most perennial Scotland parks; it was designed by Joseph Paxton and founded in 1857. The park was named after Queen Mary Stuart and represented the diversity of English nature.

Surrounded by amazing trees and flowers, the park features a large lake; around it, tourists can feed ducks and swans. But that’s not all you can do at the lake; you can also take a cruise and see the nearby sights or just enjoy this laid-back destination with its cafés, restaurants, sports, and picnic areas.

Kelvingrove Park is one of the most sought-after and lively places in the Scottish city of Glasgow. This slice of Scotland parks impresses tourists with its numerous natural and architectural attractions.

Kelvingrove Park was established in 1852 by the famous English gardener, Sir Joseph Paxton, for the purpose of expanding the city to the west.

Three important exhibitions were held in the park; in 1888, 1901, and 1911. During the exhibitions, impressive structures were built at the park, including the large pavilion that now houses the art gallery and museum.

The park has plenty of attractions that are worth a visit, including the famous art gallery and museum, which is adjacent to the park. Also, the Stewart Memorial Fountain and the bronze figures at the park deserve special attention, like that of physicist Lord Kelvin and the writer Thomas Carlyle, among many others.

The vast Kelvingrove Park has a total area of 34 hectares, and it is home to several birds, such as the Grey Heron, Goldcrest, Mallard (Wild Duck), and Chaffinch. Other wildlife, including red foxes, brown rats, and otters, can also be found here.

The Clyde Valley Woodlands National Park is one of the most enchanting Scotland parks, with waterfalls and tangled pathways waiting for you to explore.

The Clyde Valley has a lot to offer; flowers that cover the ground, their peaceful sway in the wind contrasting with the power of the falls of Clyde Falls.

Next to the waterfalls are the ruins of Corra Castle, which is a must-add to your itinerary while at the park.

Glasgow Green is the city’s oldest park, as it was founded in the mid-15th century. The first mention of the park goes back to 1450, when King James II gifted Bishop William Turnbull and the city’s citizens the land where the park is now.

However, the park looked nothing like it does today; it was rather a collection of uneven greens scattered around, and it wasn’t until the early 19th century that the park was improved.

In 1898, the park opened the People’s Palace museum; it exhibits a collection of different items and artworks about the people of Glasgow in the past and their lifestyles.
Besides the museum, the park has several other historical landmarks, a football field, sports grounds, and many others. Additionally, several public events and concerts often take place in the park.

These are only some of the many Scotland parks you need to visit at least once. But it’s not just the parks, the country has so much more natural beauty to offer, some of which come with such an intriguing history, like its haunted castles!

Haunted Castles in England You Should Visit at Least Once!