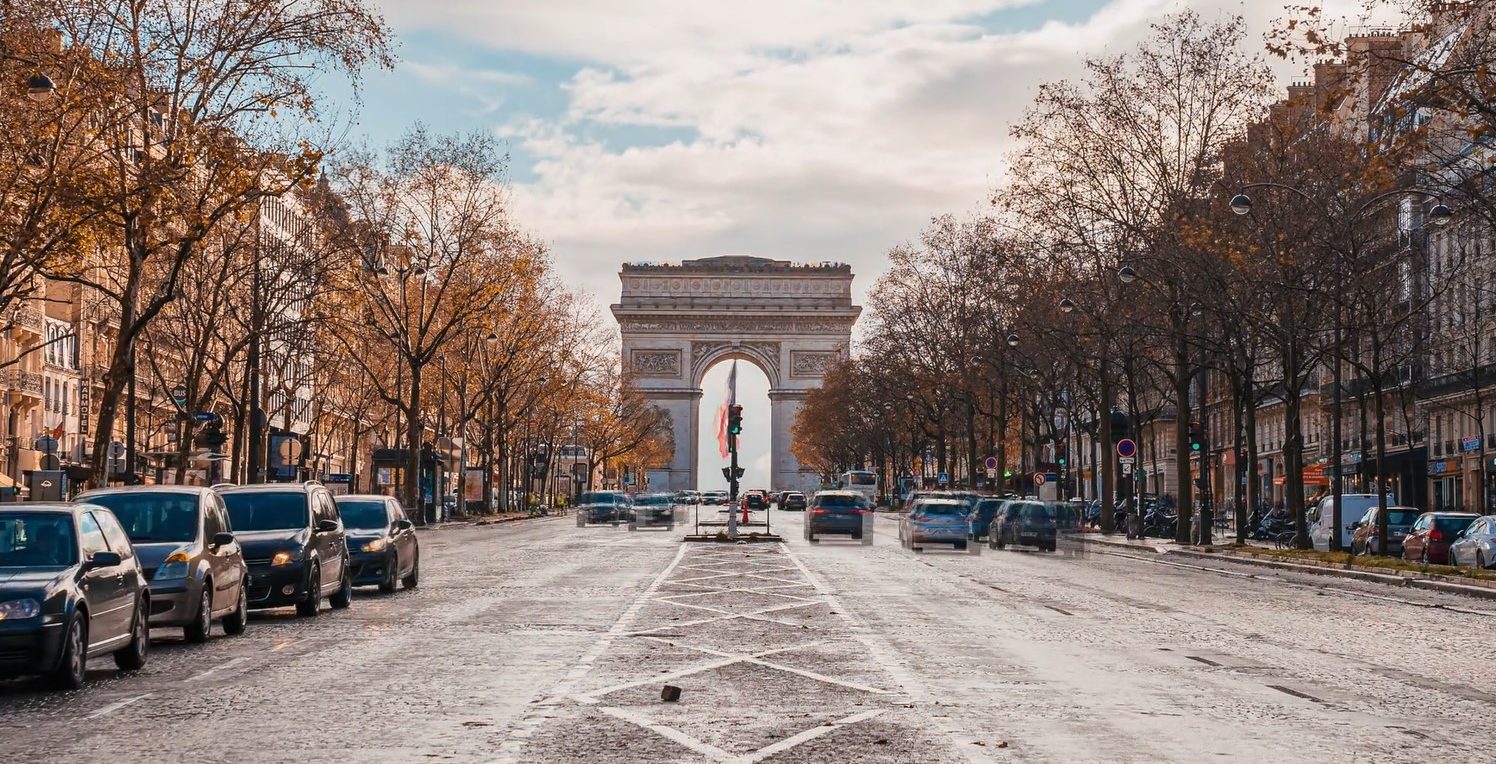 Built in honor of those who gave their life for the freedom of their beloved country in the French Revolution and the Napoleonic Wars. The Arc de Triomphe has the names of all the battle victories and the generals inscribed on its surface. The tomb of the Unknown Soldier commemorating soldiers who lost their life in the First World War.

The Arc de Triomphe, along with its plaza combine three arrondissements; the 16th arrondissement to the south and west, the 17th to the north and the 18th to the east. It stands at the western end of the famous Avenue des Champs-Élysées.

The Arc is considered the centerpiece of the Axe Historique or a Historical Axis; a line of monuments, landmarks and thoroughfares on the same route starting from the courtyard of the Louvre, all the way to the Grande Arche de la Defense.

In this article, we’ll get to know everything about the Arc de Triomphe, from its history up to events that take place nearby!

History of the Arc de Triomphe

The selected location of the arch is on the right bank of the River Seine. Architect Jean Chalgrin was commissioned to build the arch after the victory in one of the most important battles of the Napoleonic Wars; Austerlitz in 1806. Setting the foundations of the arch alone took two years, with inspiration drawn from the Arch of Titus in Rome.

A complete mock-up of the arch was constructed under the supervision of Chalgrin. It stood welcoming Napoleon and his new wife Archduchess Marie-Louise of Austria when they entered Paris from the west, in 1810. After the death of Jean Chalgrin in 1811, work was taken over by architect Jean-Nicolas Huyot.

The Arc de Triomphe in the 19th century

Construction works on the arch stopped during the Bourbon Restoration. Works weren’t resumed until after the July Revolution and enthroning King Louis-Philippe in 1830. The construction was then finished between 1833 and 1836 under the direction of the French politician, Héricart de Thury.

Architectural details of the Arc

Jean Chalgrin designed the arch in a Neoclassical alteration with the use of Roman Architecture as a reference, hence the astylar design. The Arch is 50 meters high, 45 meters wide and has a depth of 22 meters. It has several vaults, the larger one is 29.19 meters high and 14.62 meters wide. The smaller vaults are 18.68 meters high and 8.44 meters wide.

The sculptural work on the pillars of the arch represents some of France’s most renowned architects as well as some of the sculptures depicted on the arch were crafted by them as well.

Some of these sculptors and their works include Jean-Pierre Cortot with the sculptures of the Triumph of 1810, François Rude and his work of the Departure of the Volunteers of 1792, also known as La Marseillaise.

The sculptures of Resistance and Peace are both works of Antoine Étex. The four sculptural groups are located at the base of the arch. Interpretation of the sculpture of Peace changed to commemorating the Peace of 1815.

The reliefs on the façades depicting significant moments in the French Revolution and the Napoleonic Wars include:

Names to Remember inscribed on the Arc de Triomphe

The names of prominent French victories in both the French Revolution and Napoleonic Wars were engraved on 30 shields, which constitute the sculptured frieze above the attic. The names of 660 people, of which 558 names belong to French generals who gave their lives during wars of the First French Republic, are inscribed on the inside walls of the monument.

The names of the most famous victories during the Napoleonic Wars were inscribed on the shorter walls of the supporting columns. However, the names of the battles that took place between Napoleon’s departure from Elba up to his ultimate defeat in Waterloo, are not included.

The massive arches of the arc are decorated with sculptures and allegorical figures that depict different characters in Roman mythology. The ceiling of the arc is decorated with 21 sculpted roses. Several plaques are positioned at the foot of the arc, including the Plaque of the Proclamation of the Republic and the De Gaulle Speech Plaque.

Le triomphe de la Révolution (The Triumph of the Revolution) was a sculpture depicting a chariot being drawn by horses in preparation to crush Anarchy and Despotism, was made by Alexandre Falguière. The sculpture stood on top of the arch for four years between 1882 and 1886 before it fell into ruins.

The Arc de Triomphe in the 20th century

One of the most interesting and news-covered events which took place at the Arc was the flying of the French aviator Charles Godefroy’s biplane under the arch, on August 7th, 1919. In the beginning, another pilot was scheduled to make the trip, Jean Navarre, but he crashed while rehearsing for the event.

It was only natural that such a symbolic monument becomes an integral part of any marching parades, specially victory parades. Victorious French troops would march to and through the Arc and it became a part of the celebrations for Bastille Day by the Bastille Day Military Parade.

Some of the most famous parades include the Germans in 1871 and 1940, the French in 1919 and later with the Allies in 1944 and 1945. However, after the interment of the Unknown Soldier in 1921, troops ceased to march through the Arc and parades would march up to the Arc, circle around it and continue their march.

Up to the 1960s, coal soot and car exhausts caused the blackening of the structure of the Arc and the process of cleaning and bleaching the monument took place between 1965 and 1966.

The Arc de Triomphe in the 21st century

A permanent exhibition that discusses the history of the Arc was opened inside the monument in 2007. The exhibition, under supervision of artist Maurice Benayoun and architect Christophe Girault, questions the symbolism of the Arc and the balance of its symbolic message, particularly during the past two centuries.

During the Yellow Vests Movement in 2018, vandals distorted the façades of the Arc by spraying graffiti and they ransacked the Arc’s small museum.

This unique project was a dream of artists Christo and Jeanne-Claude since the 1960s when Christo was living close to the Arc. The duo are known for their large-scale wrapping of public monuments and their previous works include Wrapped Reichstag in Berlin and the Gates in New York.

Even though Jeanne-Claude died in 2009, Christo began actual planning for the project only began in 2018 and was scheduled to finish by Spring 2020 and was later delayed to September of 2020 to wait for the finishing of the Kestrel falcons, which nest in the monument during the spring.

The project was all self-funded through the selling of project documentation such as drawings and models. Due to the Covid-19 pandemic, the project was again delayed and Christo died in May 2020 but news outlets announced the project would proceed until it was eventually finished in September 2021.

L’Arc de Triomphe – Wrapped is the wrapping of the Arc using 25,000 square meters of silver-blue and recyclable polypropylene fabric put together using 3,000 meters of red rope. The project went on for the duration of two weeks.

Tomb of the Unknown Soldier beneath the Arc de Triomphe

The tomb was installed beneath the Arc on Armistice Day back in 1920. On top of the tomb burns the first eternal flame to be lit in both Western and Eastern Europe after the fire of the Vestal Virgins was put out, back in the 4th century. The flame burns in memory of those who were never identified during both World Wars.

Every year, on November 11th is held at the tomb to commemorate the signing of the Armistice of 11th of November 1918. At the beginning, it was argued to put the remains of the Unknown Soldier in the Pantheon. However, a campaign of written letters objected to the idea which eventually led to the burial beneath the Arc.

On 10th of November 1920, the coffin of the soldier was put in the chapel of the first floor of the Arc. On January 21st the following year, the coffin was laid in its final resting place in the tomb. There’s an inscription on the tomb that reads “ICI REPOSE UN SOLDAT FRANÇAIS MORT POUR LA PATRIE 1914–1918” or “Here lies a French soldier who died for the Fatherland 1914 – 1918”.

Avenues fanning out of the Arc de Triomphe

The Arc stands in the center of Place de Gaulle, which is the meeting point of 12 avenues. The dodecagonal configuration explains the square’s former name; Place de l’Étoile or Square of the Star. The name of the square was changed in 1970 after the death of President Charles de Gaulle.

Another way to look at it, is that the 12 avenues fan out of the Arch. The names of these avenues are:

Every year on the morning of July 14th, the Bastille Day Military Parade, also known as 14th July Military Parade, takes place. The parade has taken place since 1880, almost without any exceptions. The parade is mirrored by smaller parades in France’s garrison cities such as Marseille, Toulon, Brest, Rochefort and Belfot.

The parade, which consists of around 9,500 soldiers, 380 vehicles, 240 horses and a bit more than 80 planes and helicopters. The parades marches down the Avenue des Champs-Élysées after passing by Place de Gaulle and the Arc de Triomphe.

Have you ever visited the Arc de Triomphe? Please, do share your experience with us in the comments and let us know if we’ve missed anything!

The Arc de Triomphe is on our list of top recommendations for monuments to visit in our list of the Best 10 Destinations for the Best Christmas Celebrations and our Ultimate Western Europe landmarks’ Guide! For a video guide, our 24 Hours in Paris video is a must watch!

The Statue of Liberty: Your Guide to Visiting New York City’s Enthralling Monument

The Best Places to Explore in Edinburgh, Scotland