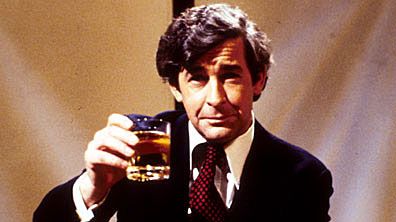 His real name is David Tynan O’Mahony and is well known as Dave Allen. He was born on the 6th of July 1936. He was an Irish observational comedian and satirist.

Allen became well-known in Australia during 1963 and 1964.  The Allen Dave show aired from 1972 till 1986 and it aired in several other European countries. He made regular television appearances in the United Kingdom from 1960 till the mid-1980s.

His career had a major resurgence in the late 80s and 90s. At the height of his career, he was the most controversial British comedian, regularly provoking indignation at his frequent highlighting of political hypocrisy and disregard for religious authority.

His television shows were broadcast in many countries like the United States, Canada, Australia, and New Zealand.

Dave Allen was born in Firhouse, Dublin, Ireland. His father was Gerard Tynan O’Mahony who was Managing Editor of The Irish Times and died when Dave was 12, and Dave moved with his mother to England at the age of 14.

He and his father were very close to each other, both possessing a great sense of humor and a gift for impersonations, that’s why it was a shock to David when his father died on the 19th of April, 1948. Dave and his family struggled after his father’s death.

In order to earn money, his mother, Jean, worked as a dress designer so that her boys can go to college. His brother Peter worked as a junior reporter in Drogheda, and John, his other brother, joined Independent Newspapers on the commercial side.

He got married to the English actress Judith Scott in 1964 and had two children Edward James Tynan O’Mahony and a daughter Jane, but unfortunately, Dave and Judith got divorced in 1983.

He died peacefully in his sleep in London on the 10th of March 2005 at the age of 68. He was married before his death to Karin Tynan O’Mahony, she was his partner since 1986 and a wife for 18 months who gave birth to their son Cullen three weeks after his death.

Dave Allen’s career started when he followed his father into journalism, by joining the Drogheda Argus as a copy boy. In 1955, he moved to London after his brother moved there and worked in several jobs before becoming a Butlins Redcoat at Skegness in a troupe that also included the British jazz trumpeter and writer John Chilton.

In the summer season, he used to do stand-ups in strip clubs and worked for four years, but it didn’t work out for him and so he sold toys in a Sheffield store and also worked as a door-to-door draught-excluder salesman.

He had to change his surname due to advice from his agent from O’Mahony to Allen because his agent believed that few people in Britain could pronounce “O’Mahony” correctly.

Allen appeared for the first time on the BBC talent show New Faces in 1959. This marked the beginning of his career in the entertainment business. He went on to host pop music shows in the 1960s.

He also went on a tour in South Africa with American vaudeville star Sophie Tucker, and she was impressed with him and suggested to him to try his luck in Australia. When he went there he worked with Digby Wolfe on Australian television, becoming Wolfe’s resident comedian.

While he was in Australia in 1963, he achieved a lot of success and accepted an offer to headline a television talk show with Channel 9 called “Tonight with Dave Allen”.

In 1964, he returned to the United Kingdom and appeared as a guest on many TV shows, such as The Blackpool Show, Val Parnell’s Sunday Night at the London Palladium and on the BBC on The Val Doonican Show.

In 1967, Allen hosted his own comedy/chat show Tonight with Dave Allen, by ATV, which earned him the Variety Club’s ITV Personality of the Year Award. In 1968, he signed with BBC and appeared on The Dave Allen Show, and followed it with Dave Allen at Large from 1971 to 1979. The shows featured his favorite routine of telling jokes while sitting on a stool and drinking.

In 1972, Allen acted as a Doctor in the Royal Court’s production of Edna O’Brien’s play A Pagan Place, he also appeared in Peter Pan during 1973 and 1974 and he played the role of Mr. Darling and Captain Hook.

He was also a social commentator, as he appeared in many television documentaries starting with Dave Allen in the Melting Pot (1969). It talks about life in New York and dealing with several issues such as drugs and racism. He also hosted other programs, including Dave Allen in Search of the Great English Eccentric 1974 and Eccentrics at Play 1974.

In 1993, Allen returned to ITV and starred in the Dave Allen show as it was his last regular television series.

Allen began his retirement in the late 1990s in his home in London, after that he continued his hobby of painting and he showed his work in 2001 to raise funds for Marie Curie Cancer Care.

He also quit smoking in the 80s saying, “I was fed up paying people to kill me”. Also, in 1994 he made a comedy skit not only talking about quitting smoking but hating the smell of the smoke.

Allen made occasional chat show appearances and discussed his career in the six-part The Unique Dave Allen. After his huge career, he was presented with a lifetime achievement award at the British Comedy Awards in 1996.

He always made a toast at the end of any of his acts saying “Goodnight, thank you, and may your God go with you”.

Dave Allen had a special comic style, which made many British comedians inspired by him. He often liked to target the figures of authority, Allen had an observational style and his language was frequently ripe.

Another comedian influenced by the Irish legend was Adam Sandler, who when interviewed in 2017, said that Allen is one of his major sources of inspiration when he saw his act at the Nevele hotel at the age of 10.

In the end, and after a long career, a show portraying his life and work, entitled Dave Allen at Peace, was shown on BBC in 2018 with Aidan Gillen portraying the late comedian.

Longford's Centre Parcs: an Amazing Boost to Tourism in Ireland