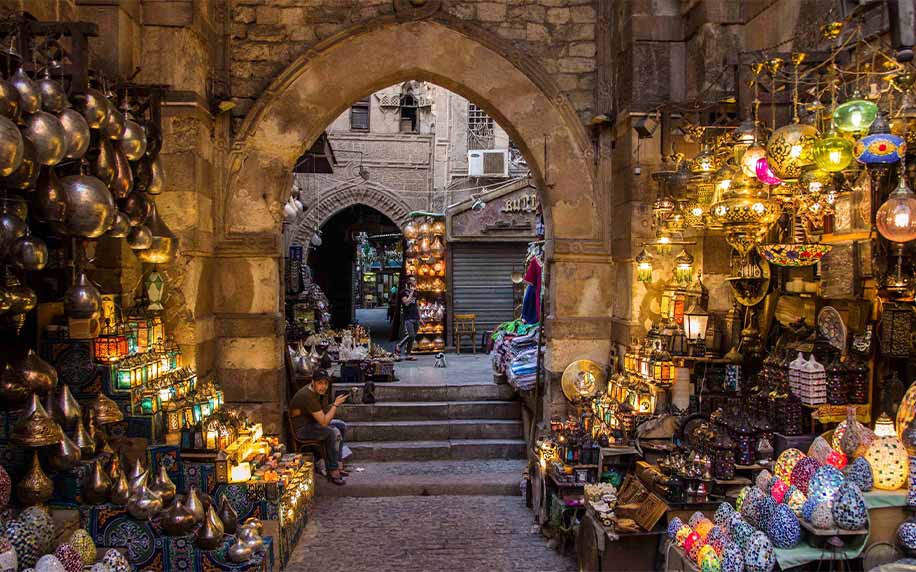 Khan el-Khalili is a famous souk or market street in the old centre of Cairo, Egypt. The market was established in the Mamluk era as a centre for trade in the city and the region, and it has since become one of Cairo’s main attractions for tourists and Egyptians alike. Khan el-Khalili is also home to many artisans’ workshops working in the production of traditional crafts and souvenirs.

During the Fatimid era (10th-12th centuries), Cairo was the centre of the Fatimid Empire that spread across most of North Africa, parts of the Levant, and Hijaz. Two large palaces were built to house the rulers and their household, between which was an important plaza known as Bayn al-Qasrayn (Between the Two Palaces). During that period, the city was opened for foreign trade and became a business centre in the region during the following centuries.

Under following rulers, such as the Ayyubids and then later the Mamluks, this avenue became a favoured site for the construction of religious complexes, royal mausoleums, and commercial establishments.

Over the years, more and more shops were established along the street, selling a variety of different products.

Consecutive rulers redeveloped the area to add their own distinctive touches, with some nearby places being named after them later on, such as Sultan al-Ghuri or Jaharkas al-Khalili who erected a large khan (market) that is now known as Khan al-Khalili.

Emir Dajaharks Al-Khalili re-established this large market on the site of the Zaafran Tomb, where the Fatimid rulers of Egypt were buried. It was later rebuilt under Sultan Barquq in the 14th century to help the city recover from the ravages of the Black Death.

Today, Khan el-Khalili is where local merchants and traders sell their products. It is a very popular location among tourists who flock to the market to buy unique souvenirs, antiques, and jewellery to take home with them.

There are also several traditional coffeehouses, restaurants, and street food vendors throughout the market. Perhaps the oldest and most famous coffeehouse is El Fishawi’s which opened in 1773.

What to Buy at Khan el-Khalili

No visit to Cairo can be complete without stopping at the Khan el-Khalili, where you will be transported back in time to a different era. There, you will enjoy browsing the numerous shops and stalls, smelling the scent of spices, weaving through the hustle and bustle of the busy Cairo Street, and choosing from the many beautiful objects on display. Choose from among the many statuettes, spices, souvenirs, jewellery, t-shirts, galabiyyas, belly dancing costumes, and much more to take home with you to remember this unique trip.

There is also a spice market where you can pick and choose from a wide variety of fresh spices. The perfume market is full of numerous types of scents and essential oils. As you go deeper into the market, you’ll find many gold and antique vendors, as well as fabric shops and carpet sellers.

You can simply take a stroll through the winding narrow alleyways of this district, after which you can relax at one of the traditional coffeehouses or restaurants for a tasty Egyptian dish.

Mawlid Al-Hussein celebrations take place in this location every year. It is a Sufi celebration of Imam Hussein’s birth, where Sufists perform litanies and partake in other traditional activities.

How to Get there

Khan el-Khalili can be reached by Uber or taxi easily. You can also take the metro and get off at Ataba Station, which is a short walk away or you can take a taxi or micro-bus there as well. Buses also depart from Ramses station or Tahrir Square for Khan el-Khalili.