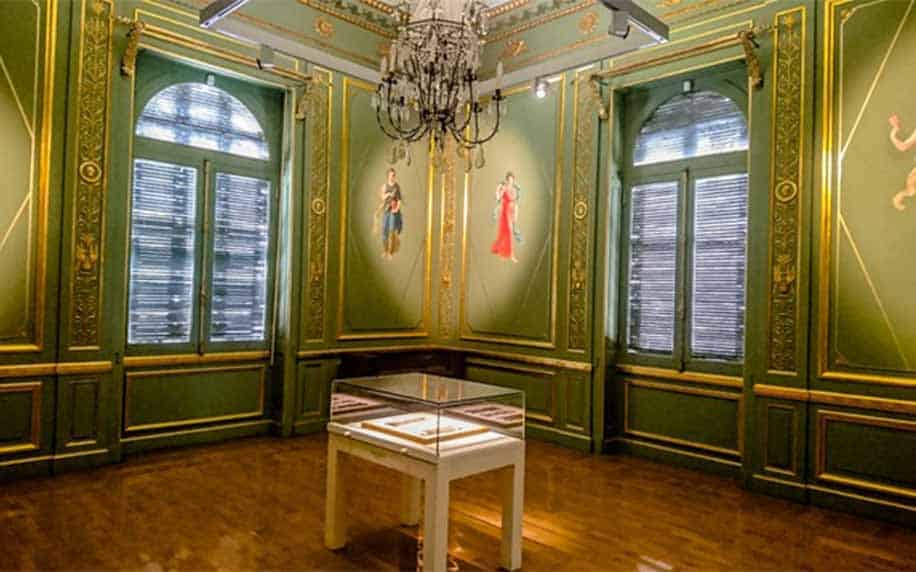 Overlooking the flowing waters of the Nile in Cairo are many important buildings, embassies and landmarks, but few can hold a candle to the beautiful Aisha Fahmy Palace in Zamalek.

Who was Princess Aisha Fahmy?

Princess Aisha Fahmy is the daughter of the Ali Fahmy Pasha, King Fouad I’s army chief. She was the richest woman in Egypt at the time and was also the wife of salient Egyptian actor and director Youssef Wahbi who was a pioneer of Egyptian cinema towards the beginning of the 20th century and whose father Abdullah Pasha Wahbi was a friend of Ali Pasha Fahmy.

Wahbi usually invited the Princess to parties at his home attended by many of the rich and famous members of the entertainment industry. As their relationship progressed, they went on a trip together to London and they continued to grow closer together as he stood by her during the trial of her brother Ali Fahmy’s murder at the hands of his French wife who wanted to run off with his money.

Unfortunately, her sister-in-law Margarette Miller was acquitted despite all the evidence proving her involvement in the murder, however, she was not given access to an inheritance.

The case incited outrage among the Egyptian public at the time and it inspired Wahbi to write his first film, and the first Egyptian speaking film, Awlad El Zawat (1932), which focused on the problems facing marriages between Egyptian men and foreign women. The film also featured a hero who would marry a woman several years older than him, which seemed to foreshadow the developments in Wahbi and Aisha Fahmy’s relationship since she was 16 years older than him.

Aisha was in fact married and had to forfeit an extraordinary amount of money and land to speed up her divorce so she could marry Wahbi. They soon married in Paris with very few guests, including Aisha’s close friend, Saeda Mansour, daughter of Mansour Pasha Youssef and wife of Abdel Shafy Bek El Moghazy. Aisha helped Wahbi save his theatre from bankruptcy. She accompanied him on his tours around the world where he presented his plays along with his renowned theatre troupe.

Their marriage was successful for several years until jealousy got the better of them, according to Wahbi’s autobiography. He reportedly left their home with barely any money or possessions. Aisha Fahmy tried to entice him to return by offering him money and land but he refused and they divorced, after which she pursued him in the courts until he announced his bankruptcy.

It is said that she married another renowned actor of the time, Mahmoud Shikoku, to arouse Wahbi’s jealousy but to no avail. The aristocracy and many notable figures are also said to have pressured Shikoku to divorce Aisha Fahmy, most say due to incitement from Wahbi himself, and they did divorce.

A while after the Aisha Fahmy and Wahbi’s divorce, a relationship began to develop between Wahbi and Saeda, Aisha’s friend who had attended their wedding, even though she was still married, which prompted her brothers and husband to send him threats after he escaped with her to Beirut, Lebanon. It was reported that Aisha Fahmy tried to offer Saeda money to leave Wahbi, but she refused, and their marriage continued until his death in 1982.

How did Aisha Fahmy Come to Own the Palace?

After her father and brother’s deaths, Aisha bought the shares of her siblings for the amount of 72 thousand pounds, an extraordinary amount at the time, and it became solely owned by her. Princess Aisha Fahmy lived in the palace with her husband Youssef Wahbi for years before their divorce. She continued to live in the palace afterwards until she passed away in 1962.

The palace was built in 1907 for Aisha’s brother, Egyptian aristocrat Ali Fahmy. It was designed in the classic European style by Italian architect Antonio Lasciac, and was built overlooking the Nile River in Zamalek on an area of 2,700 m2.

The rooms to the right are the summer rooms and have a magnificent view of the Nile. As for the rooms to the left, they were used in the winter, including a room that was originally used for playing billiards and has a fireplace. It is now turned into a living room, where Fahmy’s father’s name has been engraved in the wood.

The furniture currently in the living room doesn’t belong to Fahmy, as the curators chose new furniture to match the decorations in the room.

The second floor contains rooms for antiques, along with a Japanese room gifted to Fahmy by the Japanese embassy, which is why this room represents Japanese civilization and showcases two Buddha statues made of gold-plated wood.

The bathrooms contained gas heaters as well, quite difficult to install at the time, which just goes to show how the Princess was used to living in luxuries that were afforded to few people during that time.

The Princess’s bedroom was decorated with shiny gold leaves. She also had her own fitting room. The chandeliers in the museum and the artistic window paintings are originals but were restored over the years.

After Fahmy’s death in 1962, the palace was repossessed by the government and designated as a presidential mansion, before coming under the supervision of the Ministry of Culture. In 1976, the palace became the Center of Arts.

The palace underwent several restorations and now hosts visual arts exhibitions and artistic activities in its various rooms and the garden and its rooms display special national collections of artworks by Egypt’s leading artists.

Despite the tumultuous and sometimes tragic life story of its owner, the Aisha Fahmy Palace is one of the most beautiful landmarks in Cairo, with its carefully decorated rooms and many original and hosted exhibitions, it’s certainly a must-visit for anyone wanting to experience a different time in Egyptian history.