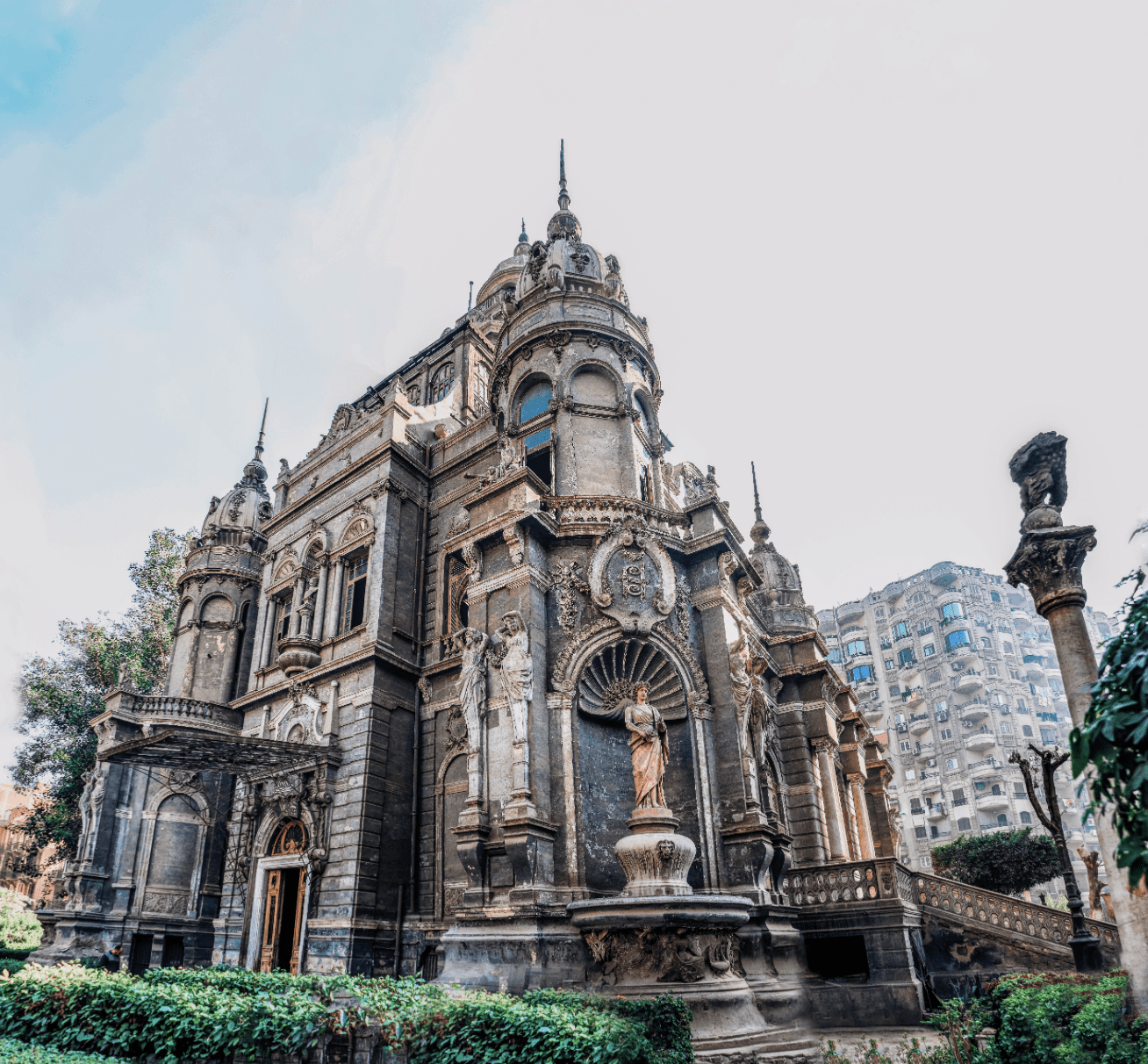 El Sakakini is a district in Cairo that was named after the palace designed by a French architect in 1897 and owned Count Gabriel Habib Sakakini Pasha (1841–1923), the head of the Syrian Sakakini family, and it took 5 years to build. He first arrived in Egypt to work with the Suez Canal Company in Port Said but later moved to Cairo, where he built this palace which is one of Egypt’s oldest palaces and was built in the Rococo style of the late 18th century with a church attached to it as well.

The palace is decorated with stunning sculptures and its ceilings are painted with scenes typical of the Rococo style. The inside of the palace features a marble bust of Sakakini Pacha, as well as unique antiquities, such as the famous Dorrat Al-Tag (Crown Jewel) sculpture of a young girl.

Legend says that Habib Sakakini attracted the interest of Khedive Ismail when he exported parcels of hungry cats to the area where mice were spread in the Suez Canal. Within days, the problem of this rodent infestation was resolved. Given his ability to quickly find a solution, the Khedive, employed this Syrian noble and assigned him the arduous task of completing the construction of the Khedivial Opera. He began working under the Italian architect Pietro Avoscani. Sakakini created a system of 8-hour shifts for the following 90 days until the construction was completed just in time for the arrival and visit of the European Kings to Egypt to attend the most luxurious ceremony for the opening of the Suez Canal on November 17, 1869.

From then on, most construction and public works contracts were managed by Sakakini. At the age of 39, Habib Sakakini received the Ottoman title ‘Bek’, and Sultan Abdul Hamid approved his title from Constantinople. Two decades later, on March 12, 1901, Rome’s Leon XIII awarded Sakakini the papal title ‘Count’ in recognition of his services to his community.

He eventually became one of the wealthiest contractors at that time, and he participated in the digging of the Suez Canal.

The palace was built in the Italian style as commissioned by Habib Pasha Sakakini to be similar to a palace he saw in Italy and fell in love with. He chose the location that sits at the crossroads of 8 main roads and thus the palace became a central point in the region and even though it was not easy to obtain such an attractive location at the time, Sakakini Pasha’s relationship with the Khedive facilitated this task.

The Egyptian Ministry of Tourism and Antiquities plans to carry out a number of archaeological projects including restorations of many landmarks around the country. So, the ministry began working on El-Sakakini Palace in order to open it for visitors.

One of Sakakini’s heirs was a doctor and he decided to gift the palace to the Egyptian Ministry of Health, and so the Health Education Museum was moved from Abdeen to the Sakakini Palace in 1961.

In 1983, a ministerial decision was issued by the Ministry of Health to transfer the Health Education Museum to the Technical Institute in Imbāba, and some exhibits were transferred to Imbāba and the rest were stored at that time in the basement below the palace. This palace was registered among the Islamic and Coptic antiquities according to Prime Minister Decree No. 1691 of 1987, to be placed under the administration and management of the Supreme Council of Antiquities.

Sakakini Palace is built over 2,698 square meters and contains more than fifty rooms distributed on five floors, and more than 400 windows and doors, and 300 statues. The palace also contains a basement, and is surrounded by four towers, and each tower is crowned with a small dome.

The basement has three spacious halls, four living rooms, and four bathrooms. This area has no special design or decorations because it was designated for the servants and kitchen area.

The ground floor is accessed through the main entrance on the southwestern side, where the ascending staircase leads to the first floor where there is a rectangular hall with a marble floor and a wooden ceiling in the middle of which is pottery decorated with plant and conch motifs. On either side of this entry are two large mirrors made of crystal.

The reception hall is accessed through the two doors from the rectangular hall, which is a hall with a parquet floor and a ceiling divided into three squares, each of which is decorated with a pictorial scene with a Christian influence similar to Renaissance paintings based on angelic drawings and human statues, and then, there is the fireplace room with wooden shutters decorated with prominent decorations of musical instruments and a window that leads to the balcony.

The first floor consists of 4 rooms, and the second consists of 3 halls, 4 salons, and two bedrooms, while the main hall is about 600 square meters, and contains 6 doors leading to the halls of the palace. The palace has an elevator and overlooks a balcony with a round dome that leads to the summer living room.

The third floor is accessed through a wooden spiral staircase rising from the second floor leading to a rectangular corridor with a marble floor and a wooden ceiling in the middle of which is an oval decorated with vegetal motifs.

The central dome of the palace is divided from the outside into three floors, the first and second are two squares, on the southern side, each with three rectangular windows topped by three other windows with semicircular arches, followed by the third floor of the dome adorned with arabesque floral motifs topped with a pointer to indicate the direction of the wind.

Above the main entrance of the palace, there are two statues, the first statue on the left side is of a woman and the second is of a man, likely representing the owners of the house. The initials H and S are also engraved above the palace entrance.

The palace has four facades overlooking Sakakini Square, and it has four gates; three of them are on the southwestern side, while the fourth gate is located on the north-eastern side, and the main façade is located in the southwestern side, with the main entrance in the center leading to a marble staircase leading to a rectangular hallway, on either side of which are two small guard rooms, and the hallway tops an entrance with an opening as wide as the balcony above it.

Although the garden surrounding the palace is not wide, it helped isolate the palace some kind of modern buildings around it. This garden has a marble statue of a crouching lion that resembles a sphinx.

As for the eastern balcony, it has a marble fountain in the form of a square basin on either side of two opposing marble lions sitting in the middle of which is a zebra, decorated with a carving of fish whose mouths open down and tails are up as if it were in a swimming position with the flow of water, which is crowned by a small vase in the center of which is the faucet from which the water comes out.

Legends about the Sakakini Palace

Like most abandoned palaces, the Sakakini Palace has its legends that have been circulated by Egyptians for years. Since it was abandoned for so long before the restoration work began, it was said that the lights within the palace would turn on suddenly at night and no one had been able to explain how that happened.

Another story says that some people saw a silhouette of a person looking through one of the windows of the palace that is reportedly of Sakakini’s daughter. Others also reported hearing unexplained strange and creepy sounds coming from the palace.

Today the palace is open to visitors, most of whom are students of the arts, who spend long hours in it studying the statues and ornaments that fill the palace. It is enough for you to wander around the corridors of the palace and its empty rooms to feel the awe and splendor of the place and learn more about its history.