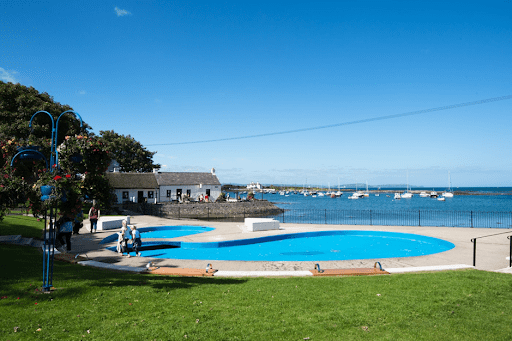 Groomsport is a beautiful, coastal village that captures the imagination.  Situated on the south shore of Belfast Lough, this picturesque little township was originally a small fishing village and is now a hotspot for water and shore-based recreation in County Down. A vibrant history, Groomsport has an antiquated feeling with Cockle Row Cottages illuminating the seafront at Groomsport beach. With plenty of character and scenic views, Groomsport, Ireland is an unmissable spot in County Down

A treasure of County Down, it is uncertain exactly when Groomsport was founded. Recent archaeological digs have uncovered axes and arrowheads from the Stone Age, believed to be older than 4000BP (BP means Before Present, which is anytime before 1950 and is the most common term used by in radiocarbon dating), and three swords were also discovered, indicating a possible settlement in 2500 BP.

Archaeologists and heritage historians believe that the village more than likely developed beside the natural, sheltered harbour between the shore, Ballymacormick Point, and a prominent rocky outcrop is known by the locals and fishermen as Cockle Island, named for the significant population of small molluscs that call it home. The harbour, which stands strong today, is believed to be of Viking origin. Groomsport beach is popular with families due to its clean sand and waters.

Groomsport: What’s in a name?

The village’s original name is Irish: Port an Ghiolla Ghruama, meaning ‘port of the gloomy servant’. Port an Ghiolla Ghruama, however, fell victim to the British anglicisation of the Irish language in the 1800s. Anglicisation, the process of modifying a foreign word to make them easier to spell, pronounce and understand in English, shaped many of Northern Ireland’s current place names.

After the devastating Great Famine (1845 – 1849) which claimed the lives of over a million Irish natives, the language declined and was eventually omitted from the school curriculum. It was looked down upon by the likes of Daniel O’Connell, an Irish politician and campaigner for Catholic emancipation, who believed it to be backwards, particularly in the face of English which he saw as the language of the future.

Hit-and-miss: An American Connection to Groomsport?

Groomsport narrowly missed out on world fame in the early 1600s. The Presbyterian community in Groomsport, Ireland at this time were being persecuted for their religious beliefs, and ‘not wanting to live in a country that denied them peace and rights of conscience’, decided to set sail for the New World. America represented freedom for them, and so the building of a great ship was commissioned by ministers Robert Blair and John Livingstone. Wood was taken from the woodlands of Clandeboye Estate, and the ship was christened The Eagle Wing after Exodus 19:4 of the Bible: ‘‘You yourselves have seen what I did to Egypt, and how I carried you on eagles’ wings and brought you to myself’.

The ship sails on September 9th 1636 from Groomsport, Ireland, with 140 passengers bound for Boston, Massachusetts. Their journey was perilous, however. They had left it too late in the year to sail via the southern coast, so they sailed towards the North and were met with violent storms.

In his historic diary, Robert Blair described the sights he and his fellow passengers witnessed: ‘when we had passed the back of Ireland and entered the great ocean, O what mountains, not waves of sea did we meet. The swellings of the sea did rise higher than any mountains we had seen on earth so that in the mid-day they hid the sun from our sight’.

Livingstone noted the damage done to the ship: ‘heavy rain did break our rudder, much of our gallon-head and fore-cross trees, tore our foresail, five or six of our champlets and a great beam under the gunner-room door broke. Seas came in and wet all them that were between decks’.

Livingstone believed that this storm was a sign; it was ‘God’s will that they return’. After 8 weeks at sea, The Eagle Wing, closer to Boston than Ireland, turned back and arrived in Carrickfergus on 3rd November. It is recorded that the ship’s sails were ripped to shreds, and its mainsail and rudder destroyed. Upon arriving home, a memorial was held for one elderly passenger and one child who died on board and were buried at sea, and a christening was held for a baby born upon the ship, aptly named Seaborn, the following Sunday.

Although The Eagle Wing had to return, historians argue that its determination to reach America prompted a wave of Ulster emigration to the New World, and it is argued among historians that the ministers who returned to Ireland became an integral part in the rebirth of Presbyterianism in Ireland and Scotland.

The Eagle Wing is immortalised in a memorial plague in Titanic Quarter in Belfast but is celebrated in Groomsport every year at The Eagle Wing Festival in the Summer. Overlooking Groomsport beach, the festivities include American-style music, food, events, and a fireworks display.

Another of Groomsport’s historical claims to fame is its connection to a key part of Irish history: the Williamite/Jacobite War (1688 – 1691). Known in Irish as Cogadh an Dá Rí, ‘war of the two kings’, this was a violent conflict between Jacobite supporters of King James II and Williamite supporters of Prince William of Orange.

Before the infamous Battle of the Boyne (1690) – a major event in Northern Irish Protestant history and culture for the victory of William of Orange ensured the continued Protestant ascendancy in Ireland at the time – Duke Frederick Schomberg arrived on the shores of Groomsport.

Schomberg,1st Duke of Schomberg, was a Marshal of France and a General in the English and Portuguese Army. He was a major support of William of Orange, and his arrival in Groomsport with 10,000 men marked the beginning of his journey through Bangor, Belfast, and on to Carrickfergus, where he began the Siege of Carrickfergus on 20th August 1689.

By the time of the Battle of the Boyne, Schomberg was hesitant about William of Orange’s plan to cross the Boyne River into the opposing Jacobite army. Loyal to his king, however, Schomberg rallied his men through the battle. Whilst in battle he was wounded twice by sabre cuts to the head and was fatally shot by Cahir O’Toole of Ballyhubbock.

Groomsport’s Orange Lodge erected a memorial to Schomberg as a sign of respect for this major figure in their history, overlooking Groomsport beach and harbour. A marching band known as Schomberg’s True Blues was active in the village for decades.

Groomsport is proud of its fishing heritage, and in 1997 opened the 300-year-old Cockle Row Cottages to the public. These cottages, situated on the shores of the village near Groomsport beach, are authentic, renovated fishermen homes that depict what life was like for Groomsport locals in the early 1900s (when they were last inhabited). Featuring vintage photographs of the village and genuine clothing, cooking, and bathing materials from the period, this museum is open seasonally and is often host to a variety of events, including live music from the Ulster-Scots Agency. Outside the cottages are vintage bird watching equipment for bird enthusiasts to enjoy the natural wildlife of the village.