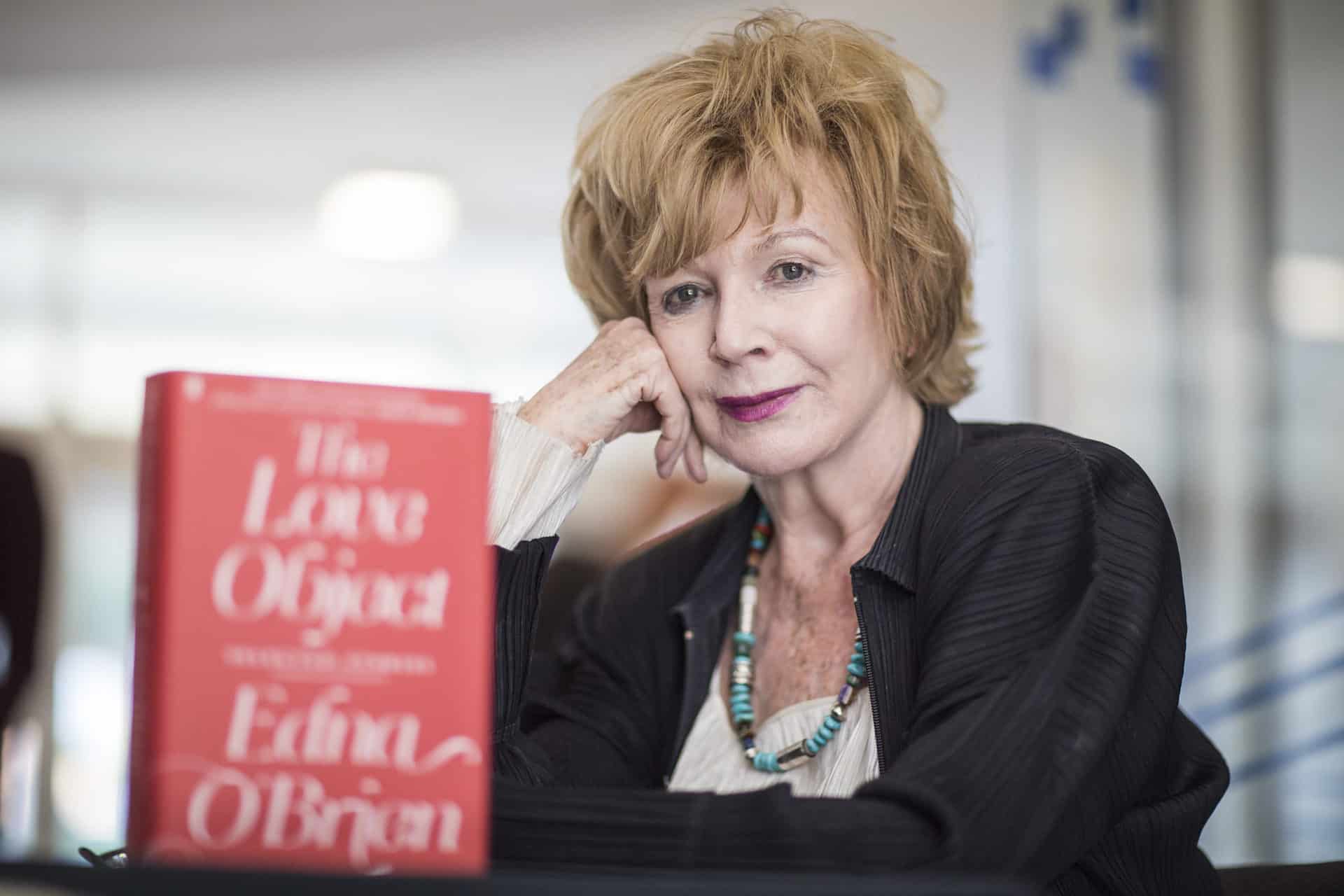 An international success, PEN Award winner, and an autobiographical author. Irish Author Edna O’Brien has lived and written about, an extraordinary life. She continues to shock, and please the world with her controversial, yet beautiful writing. The former Irish President Mary Robinson once hailed O’Brien as “One of the greatest writers of her generation”.

Continue reading to learn about the life and literary work of renown Irish novelist Edna O’Brien.

Josephine Edna O’Brien was born on 15 December 1930 in Tuamgraney, County Clare. She was the youngest child, and she described her family home as being strict and religious. As a girl, she was educated by the Sisters of Mercy, a Roman Catholic educational institution. She hated her time here and rebelled against it and released this in an interview: “Religion. You see, I rebelled against the coercive and stifling religion into which I was born and bred. It was very frightening and all-pervasive.” Due to her, what she described as, “suffocating” childhood, Edna O’Brien found inspiration for her writing, making her a worldwide success.

As a young adult, Edna married the Irish writer Ernest Gebler in 1954, and moved to London with her husband. The marriage ended in 1964, however, the pair had two sons: Carlo and Sasha.

Inspiration for Becoming a Writer

While in London Edna O’Brien read T.S. Elliot’s “Introducing James Joyce“, when reading this she learned that Joyce’s “A Portrait of the Artist as a Young Man” was an autobiographical novel. It was learning this that made her realise that she wanted to write, and use her life as inspiration.

After this, she published her first book in 1960 called “The Country Girls”. This became the first in her trilogy, the second novel is “The Lonely Girl”, and the third “Girls in their Married Bliss”. This trilogy became banned in Ireland for their intimate portrayals of the sex lives of her characters. In 1970 she wrote a novel based on her restrictive childhood called “A Pagan Place”. Her love for James Joyce is shown in her quote:

To live with the work and the letters of James Joyce was an enormous privilege and a daunting education. Yes, I came to admire Joyce even more because he never ceased working, those words and the transubstantiation of words obsessed him. He was a broken man at the end of his life, unaware that Ulysses would be the number one book of the twentieth century and, for that matter, the twenty-first. – Edna O’Brien

You can find her entire list of books here.

Edna O’Brien wrote many short stories for The New Yorker. One of her most well-known pieces was entitled “Sister Imelda”. It was released in the 9 November 1981 issue, and it was re-released in her collection of short stories called “The Love Object: Selected Stories”. Like many of her other pieces, “Sister Imelda” explores female sexuality. This short story is set in a convent, a young female in the convent falls for one of the nuns, Sister Imelda.

Their love is secret and contained in only notes, and the occasional kiss. Their love makes their lives within the convent bearable, and even enjoyable. In an attempt to continue their love, Sister Imelda gets the young student a permanent position in the convent. The young girl, the narrator, tells of how she decides not to take this offer. After leaving the convent, communication between the two gradually lessens until she almost completely forgets about Sister Imelda, and how she impacted her. She, along with her best friend Baba, have a mutual interest in makeup, and attempting to attract men.

Throughout the story, Edna O’Brien shows aspects of the childhood she despised. The semi-starvation of the students and nuns compared to the richness of the church is referenced, and the tarts show the forbidden sexuality of females. The nuns’ gestures of prostration is a symbol of Irish female suffering, and the story ends with the narrator’s pity for Imelda and the fellow nuns as she comes to the realisation of the common suffering of women.

Sister Imelda was a young nun and teacher within the convent

Narrator: a teenage student within the convent

Mother Superior was the rector in the convent

A Pagan Place was published in 1970 as a novel, and in 1972 was adapted to stage. The novel is narrated in the second person and is delivered in the form of a monologue. The narrators tell us about a girl growing up in Ireland in the 1930s- 1940s. The novel portrays her life within Ireland, which is shown as both wonderful and terrible. It follows her life from childhood to adulthood, it also mentions occurrences outside of Ireland: Hitler, and Winston Churchhill.

The novel contains many references to Catholicism, the child had her First Holy Communion and feared the Devil on many occasions. It emphases how religion is routinely woven into everyone’s lives. Likewise, she covers the idea that sex is sinful, and you should have feelings of guilt. All of these themes come from Edna O’Brien’s life growing up in Ireland.

The protagonist’s sister, Emma, is presented as her polar opposite. She falls pregnant and is sent to Dublin to have the illegitimate child adopted.

“Country Girl” is the memoir of Edna O’Brien, published in 2012. The title refers back to O’Brien’s first novel “The Country Girls” which was banned and burned by the priest of her local parish. This memoir takes us on the life of Edna O’Brien, showing the inspiration her life gave for her books. We are shown, in detail, her birth, marriage, single parenthood, and partying. We are also introduced to the people O’Brien encountered through her life: Hilary Clinton, and Jackie Onassis, on her many trips to America.

The cover of this memoir is a reprint of her 1965 novel “August Is A Wicked Month”, and it won the Irish Non-Fiction Award at the 2012 Irish Book Awards.

“I had not the heart to tell her that great love stories told of the pain and separateness between men and women.”

Edna O’Brien’s latest novel was released on the 5th September 2019, entitled “Girl”. It has already received a wide amount of support already, along with many positive reviews and most likely will be the last novel written by Edna at a remarkable 88 years old.

This novel is a harrowing tale about the abduction of women by Boko Haram. It is set in northeast Nigeria, it is both horrifying, and beautifully told! The girl referred to in the title is called Maryam, and we follow her journey as she is abducted from her school, married to the Boko Haram, having a child, and escaping with her child.

You can buy Edna O’Brien’s latest novel here on Amazon.

“Edna O’Brien’s nineteenth novel depicts the trauma which Nigerian schoolgirls faced when ambushed and captured by Boko Haram militants. This raw account of a young girl’s captivity and escape is nothing short of heartbreaking”. – Orlagh Doherty, RTE

Throughout O’Brien’s literary career, she has received many notable awards. She was also made a professor of English Literature in University College Dublin in 2006. While here, in the same year she was awarded the Ulysses Medal. She was also the 2001 Irish Pen Award winner. She has created such an impact on the world of literature that RTE aired a documentary about her in 2012.

Finally, on 10 April 2018, she was appointed an honorary Dame of the Order of the British Empire for her contributions to Literature. We have listed chronologically all the awards Irish author Edna O’Brien won for her literary work:

Throughout all the decades that we have delighted in Edna O’Brien’s forward-thinking and controversial writing, she has become well known across the world. Philip Roth described her as: “The most gifted woman now writing in English”. Eimear McBride described her as “not only giving voice to the voiceless but also washing Ireland’s dirty laundry in public” and that she “fell in love with the deep, beautiful humanity of her prose”.

“History is said to be written by the victors. Fiction, by contrast, is largely the work of injured bystanders”

“Ordinary Life bypassed me, but i also bypassed it. It couldn’t have been any other way. Conventional life and conventional people are not for me”

“I did not sleep. I never do when i am over-happy, or over-unhappy, or in bed with a strange man”

“The Vote means nothing to women, We should be armed”

“I Always want to be in love, always. Its like being a tuning fork”

Have you read any of Edna O’Brien’s literary works? Let us know in the comments below!

If you enjoyed learning about this Irish Author, please enjoy more of our blogs about famous Irish authors: