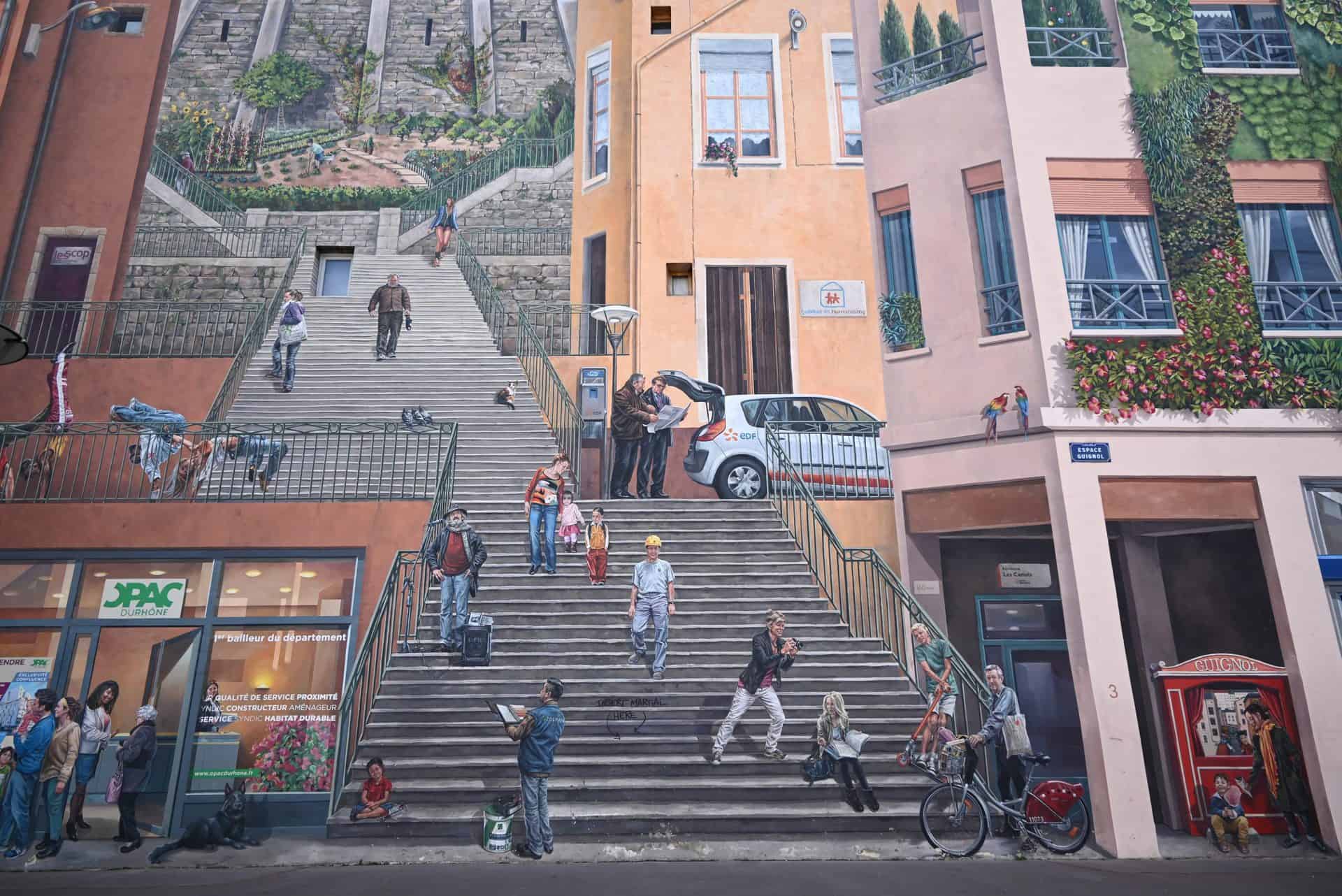 Located between the 1st and the 4th arrondissement in Lyon, La Croix-Rousse district is famous thanks to its history with the Canuts, workers weaving silk.

In tribute to them, the Canuts’s house was transformed into a museum. This house was built in 1970 on the top of the hill of La Croix-Rousse by the COOPTIS, weaving cooperative. In the house you can even still find functional weaving looms, which are used during visits for demonstrations.

Also, there is the famous La Croix-Rousse Market, located in Le Boulevards de la Croix-Rousse. Here, you can find vegetables, fruits, cheese, meat, poultry, fishes, pastries, bread, wine, and so many other tasty things. It takes place on Wednesdays and Thursdays with around 23 merchants and on Tuesdays, Fridays, Saturdays and Sundays with around 95 merchants.

Lyon, formerly named Lugdunum, Capital of the Gauls, has the oldest Roman Amphitheatre of Gaul. Located on the slopes of the hill of the Croix-Rousse, the Amphitheatre was completed in 19 AD, and hosted shows and circus games. This amphitheatre was part of the federal sanctuary of the Three Gauls, consisting of Lyonnaise Gaul, Aquitaine Gaul and Belgique Gaul. The ampitheatre was expanded in the 2nd century AD so it could accommodate up to 20,000 people.

In 177 AD, the Christian community of Lyon was persecuted. The first 48 Christian martyrs of Gaul were sentenced to death and executed for the most part in this place. In 1956, excavations were carried out in this place, which made it possible to reveal the remains we can see today. The remains of the amphitheatre have been classified as a historical monument since November 27, 1961.

The Canuts’ Fresco, a Trompe-l’oeil

Painted in 1987 by the company named “la Cité de la Création”, this painted wall that extends over a blind facade of 1200 m², is the largest in Europe.

The painting is regularly updated, over time, to give the impression of a continuity of the street, as if time also went by through this painting. In order to be more realistic, from time to time, the inhabitants represented on this façade are aged. The first update was in 1997. The most recent renovation and update was in 2013. The wall now shows a lively neighborhood, between history and modernity.

This painted wall represents the district of La Croix-Rousse, an area mainly occupied by The Canuts, who were the silk workers in the 19th century. We can see the typical buildings of the neighborhood with their high windows and their ceilings of 4m high intended to accommodate the looms. A central staircase allows climbing the hill between the high buildings of the neighborhood and gives an impression of depth.

The Statue of Jacquard

The Square of La Croix-Rousse plays a central role in the city’s history. In the center of the square stands the statue of one of the great names in the history of the silk industry in Lyon, Joseph Marie Jacquard. He revolutionized the weaving of silk, thanks to his invention of the semi-automatic loom, that favours the industrial development of the city.

This statue was originally located in Sathonay Square, before being transferred to its current location, in 1901. Originally the statue was made of bronze, however it was melted under the regime of Pétain. During the liberation of France after World War II, a stone statue was reinstalled.

A big stone in Lyon city? Yes, it is possible and it is located in La Croix-Rousse district! This big white and grey stone became the famous symbol of the district.

Its mineralogical composition shows that it was transported from the Alps to Lyon thanks to glaciers. This is called an erratic block. Its discovery dates back to 1861, when the city was creating the funicular linking La Presqu’île to La Croix-Rousse. The construction of the tunnel had to be interrupted because the workers were blocked by this unbreakable stone.

After the stone was finally exhumed, this stone became both the symbol of strength and perseverance, and also the symbol of the annexation of La Croix-Rousse to Lyon thanks to the funicular.

Le Gros Caillou was installed on a pedestal on April 12, 1891, at the end of Le Boulevard de la Croix-Rousse, from where it overlooks the Rhône.

In the La Croix-Rousse district, make a stop in the Sebastien Bouillet bakery and ask for a piece of praline pie. Give it a try and tell us what you think!

Must-Do's for a Spring Holiday in Ireland