Scáthach: Secrets of the Infamous Warrior in Irish Mythology Unearthed 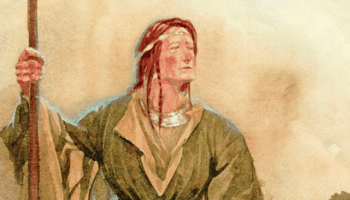 Scáthach, meaning “The Shadowy One” in Gaelic, was a mythical Celtic warrior and martial arts trainer. She was an incredible trainer and her school of warriors turned out some of the top Celtic heroes.

Keep reading to find out more about this Mythical Celtic warrior!

According to legend, Scáthach, or Sgathach, lived sometime in the centuries either side of 200 B.C. She lived on the Island of Skye, later named for her, and was a renowned warrior of formidable skill. Though most of the stories of her deeds are sadly lost, her memory survives through the legacy she created; the school of warriors.

Her name appears in the Red Branch Cycle; a collection of medieval Irish heroic legends and sagas that forms one of the four great cycles of Irish mythology. By some accounts, she was the daughter of the King of Scythia which encompassed parts of Eastern Europe and Asia.

The ruins of Dun Sgathaich near Tarskavaig, which date back to the 1300s, are said to stand on the site of Dún Scáith. It was reputed she trained only those young warriors already skilled and brave enough to penetrate the many defences of her fortress and gain access.

Few would-be students even make it across. At this impregnable castle, she trained heroes in the arts of (among other things) pole vaulting in order to assault forts, underwater fighting, and combat with a barbed harpoon of her own invention, the Gáe Bolg.

Her Legacy with Cú Chulainn

Her most famous student was Cú Chulainn, the most notorious warrior from Irish mythology and akin in many ways to the great Greek warrior Achilles. The intense tales of Cú Chulainn’s life and battles were really only possible because of her.

He sought her out because the father of the woman he wished to marry, Emer, had said they could not wed until Cuchulainn had been trained like a champion by her.

In this, he was hoping to avoid giving his daughter to the hero, since it was notoriously difficult to find the famous training island and survive her training course. Through his bravery and strength, Cú Chulainn found his way there and used his famous “salmon leap” to gain access to her stronghold.

He threatened her at sword point in order to persuade her to teach him everything she knew. She granted the young warrior three wishes: to instruct him properly, to grant him her daughter without bride price and to foretell his future.

She told him she foresaw a great and glorious career for him but did not see him living any longer than thirty years of age. However, she did grant her daughter, Uathach, to Cú Chulainn but it’s said that she also lay with him.

She taught him his art carefully and at the same times, she taught the young warrior Ferdia, who became Cú Chulainn’s brother in arms. Both were educated to an equal level, but Scathach gave Cú Chulainn one gift in secret.

This was the legendary Gae Bolga, a spear which separated into barbs on entering human flesh. Its first strike was always fatal. It was this weapon, which caused the death of Ferdia when the two men were forced to fight against each other in the saga of the Tain.

Although she does not play as much of an active role in Táin Bó Cúailngeor Tochmarc Emire, her impact in Irish myth lies with Cú Chulainn. She was also identified later as a Celtic goddess of the dead, specifically one who ensures the passage of those killed in battle to the Lands of Eternal Youth.

In this way, she is similar to a Norse Valkyrie. She is both a warrior goddess/mentor and a guide into death. Scáthach was also a formidable magician with the gift of prophecy.

What is your favourite mythical Irish Warrior? Share with us in the comments below!

Also, check out some more blogs that might interest you:

Digging Deeper into the Shrouded Mystery of the Celts| Leprechauns: The Famous Tiny Bodied Fairies in Ireland| The Legend of Finn MacCool and the Isle of Man|