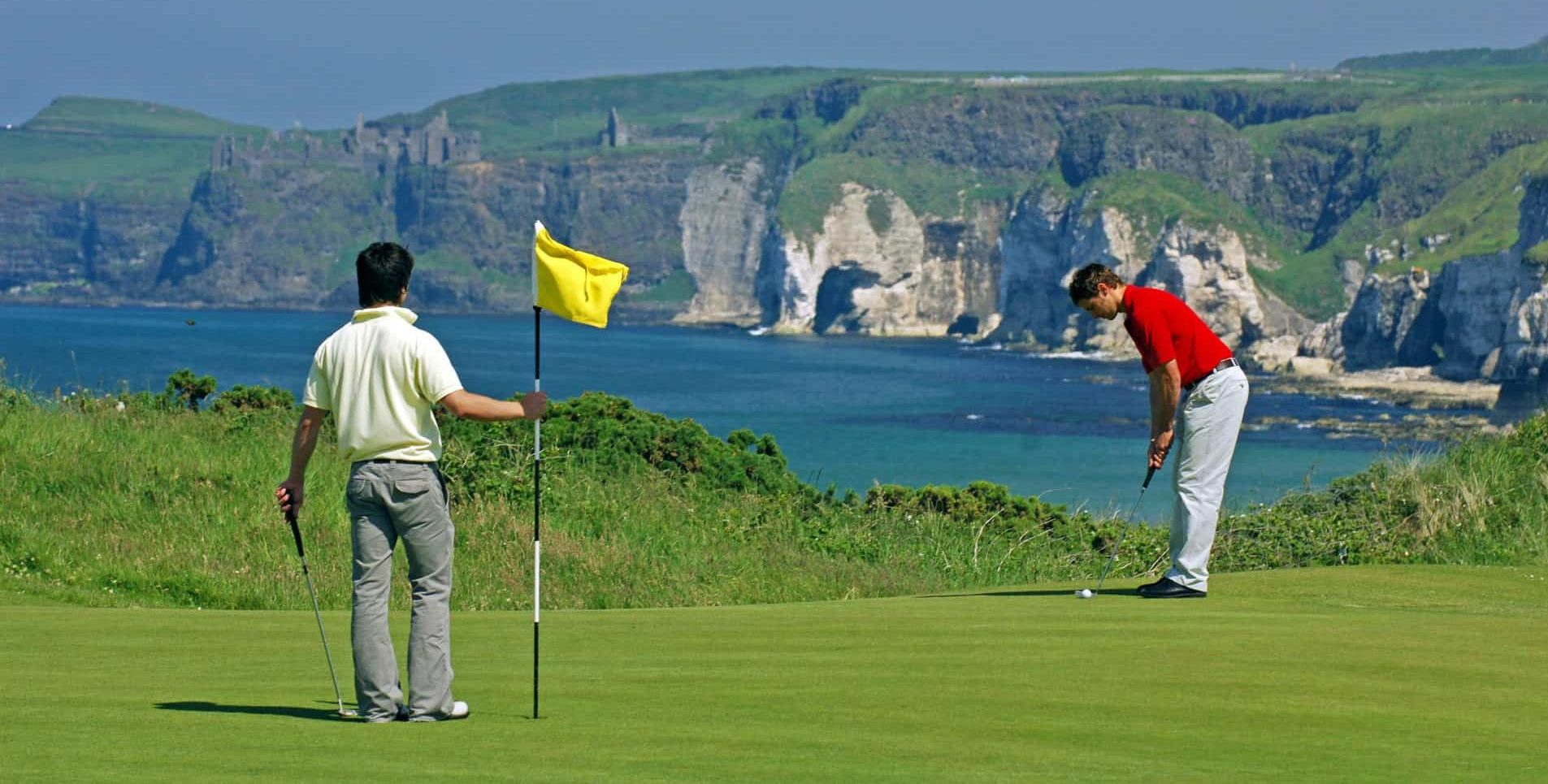 ConnollyCove is here to guide you around some of the best golf courses in Ireland. Royal Portrush Golf Club is undeniably one of the most famous and challenging Irish course to exist.

We briefly mentioned it in our Golfing in Ireland blog but there’s so more to say on this brilliant Irish golf course. So, we are going to explore what Royal Portrush has to offer from its fascinating history, magnificent courses and the world golf events that have graced its greenery.

If you’re a golf fanatic, keep reading to find out more about The Royal Portrush Golf Club, located on the North Antrim Causeway Coast.

Over 130 years ago the famous Royal Portrush was founded in 1888, originally known as “The County Club”, a small nine hole course. However just one-year later it was extended to an eighteen hole golf course.

Then in 1892 when The Duke of York was patron, it became known as the Royal County Club, for four years. This was considered unique, as many golf courses had to be around for a quarter of a century before being given the exclusive royal title.

‘The Royal Portrush Golf Club’ name was officially given in 1855, by it’s then Prince of Wales patron and has never been changed since.

Royal Portrush was also one of the first golf courses in Ireland to host the prestigious ‘Open Championships’ in 1951, one of the oldest golf championships in the world. It saw English golfer Max Faulkner win the tournament that year.

The golf club has seen more than fifty national golfing championships, both Irish and British grace its courses over the years.

The golf club played an important role in promoting women’s golf in Ireland, as it was the first golf course outside Britain to host the British Ladies Championships in 1895. This helped to encourage Irish women to get involved in the sport, as it was no longer seen as just a mans sport.

The British Ladies Championship has been held at Royal Portrush Golf Cub on eight occasions with the last one being in 2011. Each year of the tournament taking place here grew in popularity; with the crowd’s flocking to the club, to see some of the best female golfers taking on the challenging world-class courses at Royal Portrush.

Many professional golfers and amateurs come from all around the world to play on Dunluce Links, one of the greatest and most testing golf courses in the world. It’s ranked as the second best golf course in Northern Ireland and number seventh in the World’s best golf course according to Golf Digest.

Dunluce Links has constantly remained in the top spot, the reason for this? Well, I’d say it has a lot to do with the magnificent course design that excites people. Which is the fine work of Harry Colt, one of the greatest golf architects in the world.

Not to mention, the striking coastal scenery that surrounds the course, another reason why its a firm favourite. It is after all named after the incredibly ruined Dunluce castle that overlooks the course.

Dunluce links is acclaimed for its challenging hole after hole that puts the best of golfers to the test. It’s no easy course, twisting and turning at every corner, making for an exciting place to play.

The fourth, fifth and sixteenth holes are considered as some of its signature holes. Visitors can play on the course during the months of April and May.

The second course you’ll find at Royal Portrush Golf Club is the hidden gem and less challenging Valley Links Course. This course is certainly is no walk in the park but when compared to the championship Dunluce Links course, you’ll find a different experience.

The course, like its name suggests, is located between the huge sandy hills of the East Strand and the higher ground where the championship course is. It was also designed by Harry Colt so you can expect the course to have its challenges, offering a good test of golf before moving onto the championship course.

In 1951, Royal Portrush Golf Club became the first club to host the Open Championships, outside of the United Kingdom.

The Open Championship is making its historic return back to Northern Ireland this year (2019), after 68 years since the last one. It will see Royal Portrush host the tournament for a second time around, where some of the world’s greatest players will be competing.

The 148th Open championship is scheduled to take place from the 18-21 July, making Northern Ireland the centre of this global sporting tournament once again. Sporting fans are expected to grace the town of Portrush, in their thousands, to enjoy the world-class display.

It will be an exciting and enjoyable time for Northern Ireland, Golf fans and everyone who gets to soak up the atmosphere.

Check out the amazing video below, showcasing just how spectacular Royal Portrush actually is! Those views are incredible!

If you are planning a trip over to Northern Ireland for the golfing tournament, check out some great attractions near Royal Portrush Golf Club:

Also, don’t forget to let us know if you have ever played a round of golf at Royal Portrush Golf Club!

Scáthach: Secrets of the Infamous Warrior in Irish Mythology Unearthed