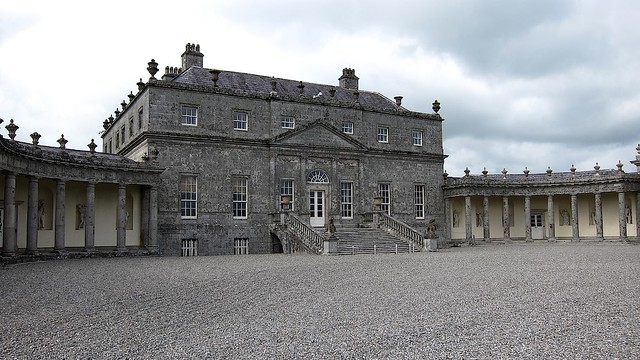 Ireland is known for its historic and famous houses, one being Russborough House, near the beautiful Blessington lake in County Wicklow. Russborough House is one of Ireland’s famous example of Palladian Architecture built during the 18th century. It surely catches your attention, as it stands dramatically out in Wicklow’s landscape and will entice you to want to get up close and personal to discover more about the place.

The historic attraction should definitely be added to your list of places to visit in County and ConnollyCove will tell you why, so keep reading to find out more about this famous Irish House.

One very important reason that might make you wish to visit this attraction is its strong history to uncover. As mentioned Russborough House dates back to the 18th century, but the story begins in the 17th century when the house was designed by Richard Cassels. The House was created for Joseph Leeson, the First Earl of Milltown, who was also known as a famous art collector.

In the 19th century, the house was sold to Captian Denis Daly and then onto Sir Alfred Beit, who is famous for bringing the Beit Art Collection to Russborough House.  At the present moment, the house is owned and managed by the Alfred Beit Foundation when Alfred and his wife left in 1978, leaving visitors to an exceptional collection of art, learning and architecture to appreciate.

Russborough House is known for being home to some of  Ireland’s most magnificent art collections, which is still on display to this day when you take a guided tour of the house.

History can further be uncovered at Russborough House through an interactive exhibition telling you all about the three different families who have lived here since the mid 17th century.

A tour of the house is something you shouldn’t pass by as it gives you the opportunity to explore amazing Irish architecture and interior design as well as the art.

There is also a cinema room where you can watch a short  2D film taken by Sir Alfred while he was travelling around the world in the 1920s and 1930s. The private auditorium room is one of the most fascinating rooms on offer, created by Sir Alfred when he purchased the home in County Wicklow.

Another hidden gem within the Russborough House and  Parkland is the recently restored 18th-century walled gardens as well as a variety of outdoor activities to enjoy. Take your time to explore the scenic parkland walks and trails that take you to the heart of the Wicklow countryside.

Or you can even choose the 2km wildlife trial taking you through the wildlife habitat located here and the many other trails. Along the routes, there are interesting information boards to fill you in on the history, as well as the flora and fauna in the area.

More activities you can enjoy at Russborough House Parkland include a 200-metre hedged maze, a children’s playground, the Birds of Prey Centre and a fairy trail.

Have you ever been to Russborough House in County Wicklow? Let us known what you thought of the attraction in the comment below.

More blogs worth reading include: