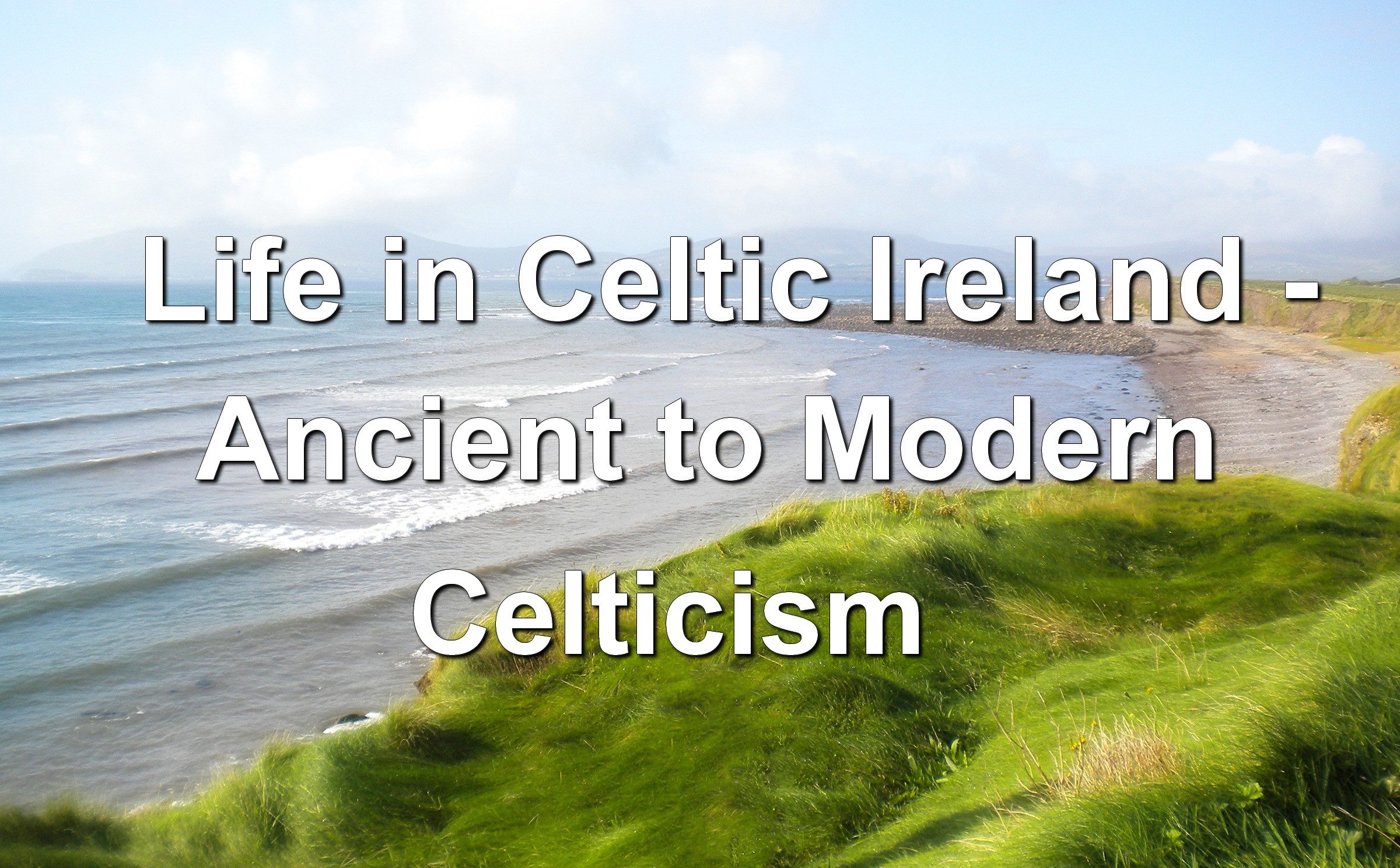 Ireland is well known for its beautiful scenery, thick forests and even breweries. However, Ireland is home to a richer history and culture. Life in Celtic Ireland holds many interesting aspects to explore; both ancient and modern Celticism have left and continue to leave their mark in today’s world. Many of your favourite films and TV series have found no better place to film than Ireland, some you never even expected.

Celt is a modern English word; its origins in Latin is “Celtae” or in Greek “Keltoi”. Used to refer to groups of people that inhabited a great deal of Europe and Asia Minor (or Anatolia) in the pre-Roman period. The Celtic culture began forming and evolving in the late Bronze Age and reached its peak in 5th to 1st centuries BC.

Life in Celtic Ireland had developed many particular characteristics. Unique features appeared in many aspects such as clothing, religion, women’s cultural norms and art; in this next part, we’re going to explore the different sides of ancient life in Celtic Ireland.

The Celtics made their clothes mainly of wool and linen; while Celts with more to spare used some silk. Lesser used material included hemp, fur and leather. The Celts took great care of their clothes, one item could take a month or more to weave.

The Celts would weave clothes on a vertical loom, then they’d sew the material using a metal or bone needle with a wool thread. Celtic clothing for both women and men wrapped around skirts, tunics, or long one-piece dresses or robes. The Celts loved bright colours and they dyed their wool to reflect this love.

They even had rules about specific days of the month or week that were suitable for dyeing. The Celts made their dyes from naturally found materials in the environment like berries, plants, stale urine and copper. In addition, they adorned their clothes with accessories such as feathers and headbands of cloth or gold.

Not all tribes had the exact same taste of course as it happens to be the case in any culture. Each tribe had their specific influence, some preferred a more baggy outfit while others liked their clothes to fit them.

While ancient life in Celtic Ireland was mostly male-dominated as is the case in almost every ancient culture. The women in Celtic Ireland were in much better standing than their Roman or Greek counterparts. The Celtic women could have high social standing and the laws regarding inheritance or marriage were in a better place than their contemporaries.

And much like today’s world, women used jewelry and embroidery to show off social class and status. Women used bracelets, necklaces and rings of relatively high craftsmanship and quality to decorate themselves.

The Celts didn’t follow one deity or religion. Religion was highly regional and much like the Greeks, they had hundreds of deities, gods or goddesses each associated with a certain feature (e.g.: rivers, earth, air) or a particular skill.

Many aspects of ancient Celticism survived and some are currently witnessing the revival. Whether it’s Celtic languages or Celtic fashion or Celtic art. It has left a great influence that without a doubt shows in today’s world. In this next part, you’ll see how life in Celtic Ireland still affects the world today.

Celticism is still alive and kicking. Modern Celtic culture contributes a lot in our current life, probably more than you think. In art, music, movies and TV shows. Also, some of the Celtic languages are still spoken to this day and some are undergoing a revival.

There are six nations in today’s world that are most associated with Celtic culture or are considered Celtic nations:

If you haven’t already gotten a couple of Celtic tracks on your playlist then you’re missing out. Celtic music is widely spread nowadays. Marked by the use of  bagpipes or harps (the harp is considered the national instrument of Wales). Life in Celtic Ireland continues to nourish and develop their memorable folk music.

Another form of major popularity is Celtic choirs. Unaccompanied or A Capella singing is witnessing a remarkable rise in popularity and is a personal favourite.

Some of these I bet you never even considered but Celtic Ireland has always offered an uncontested filming spots.

Listed below are some of the most famous movies shot in Ireland. Some even show part of the rich culture of life in Celtic Ireland.

Gibson and his team decided to switch to Ireland as a last minute decision after it was originally to be shot in Scotland and what a good call that was!

2. Harry Potter And The Half Blood Prince

The team shot scenes in Dublin and others in Kilmainham but sadly none of the driving stunts scenes showed the beauty of Ireland.

Admittedly this one wasn’t actually filmed in Ireland, but Ireland is the birthplace of CS Lewis and the inspiration to his fictional world. In addition, it has many tributes of the Chronicles of Narnia movies. If you go there you might just find Narnia in your wardrobe or in this case outside your window. You can find out more about CS Lewis places of inspiration or tributes to Narnia if you’re a true fan here and here.

Modern life in Celtic Ireland witnessed many of your favourite TV series listed here are two of the most popular ones.

If like me, you’re a fan of the show you’ll be excited to know it remains true to the story by taking place in Celtic Ireland.

You read that right. The most anticipated and successful show Game of Thrones takes place in Ireland. A lot of the beautiful Irish landscape is used as a backdrop throughout the series.

So whether you’re a fan of music, art, movies, popular TV series or just a sucker for beautiful scenery life in Celtic Ireland is what you need to experience.

There’s a lot of sites where you can find out more about your favourite shows or checkout touristic spots. You can check up online or you can try this one for your liking Connolly Cove – Travel in Ireland. Whatever part of life you’re looking to experience, you’re sure to find a place for it in Ireland.