The Curious Case of Irish Curses 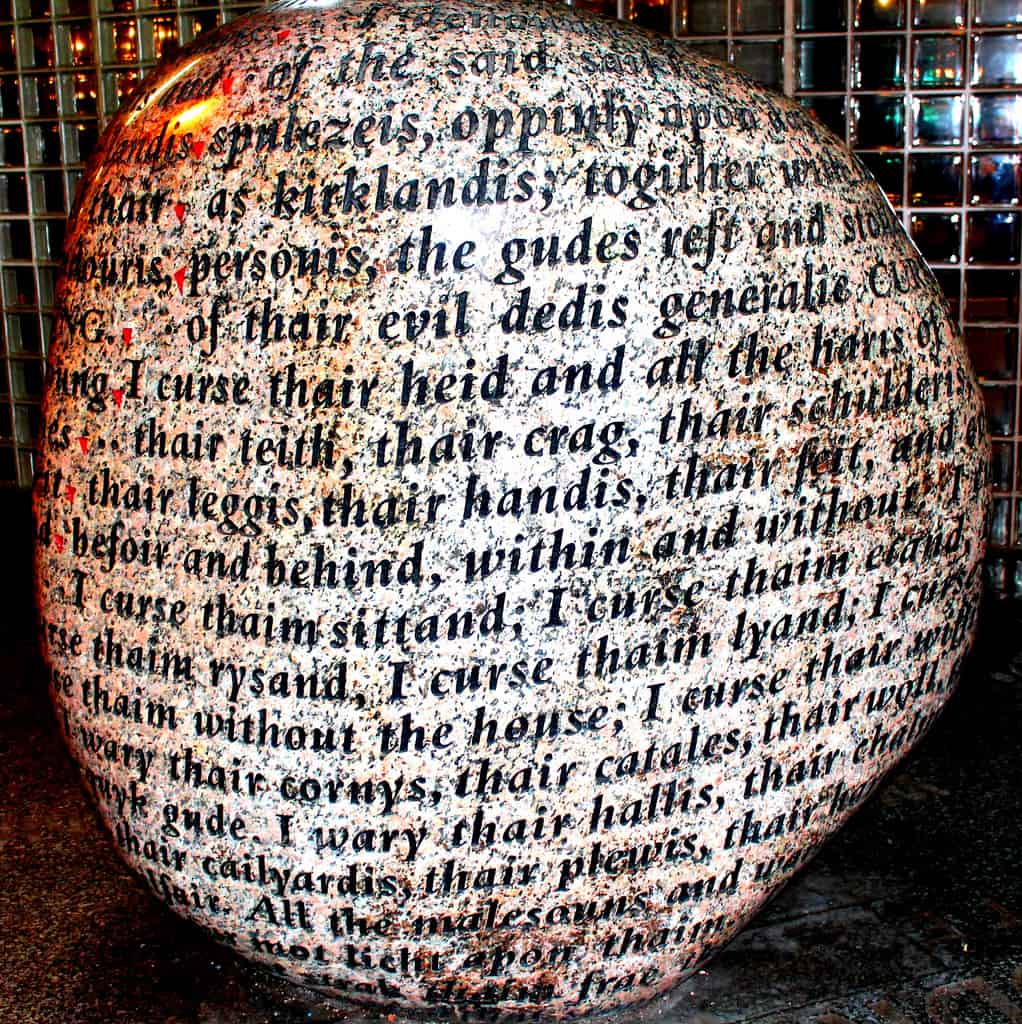 An island people the Irish may be, yet the history of Ireland has never been insular or inward-looking. Instead, it is a story of a people profoundly aware of the wider world – its threats, its possibilities and its advantages. From that, it can also be said that Irish curses and certain beliefs have developed and gained more and more popularity throughout the years. Some of them are even haunting in nature and still mysterious until this moment.

Curses in Ireland come from the usual roots, folk magic and charms, mythology, and religion. (The good versus evil model is simple and always popular). With famous examples of spell curses in folklore. For example, the spell placed on Etain that turned her into various animals. Or the curse placed on the children in the story of the Children of Lir.

These qualify as curses because they are malicious, inflict hardship on the victim, and are contingent on a set of extreme circumstances before they can be lifted. Every country and every town has its own peculiar curses. Ways of accidentally (by falling over a rath or fairy fort or standing on a famine grave) attracting a curse or deliberately inflicting one.

Cursing someone, basically wishing bad luck or evil on someone by invoking a non-human power, is found in many different cultures around the world. In most cases, involves the use of a formula (e.g. prayer, spell – whatever you want to call it!) and an associated prop such as a wand, personal object associated with the person you want to curse, a magic doo-dah or a cursing stone.

Thus far Ireland is like any other country, but their Filiocht (poets) bequeathed to them another rich magical strain. One which contains the rules for just and unjust curses.

The position of cursing stones in Irish folklore is poorly-documented, perhaps due to their malevolent nature. While the early Celtic Christian church absorbed many of the pagan beliefs of old Ireland, that process was a piecemeal one. The sacred wells became holy wells easily enough, just as the acts of pagan heroes became the miracles of saints.

However what could be considered the polar opposite of the sacred wells, the cursing stones, were not so palatable to Christianity. The notion of uttering curses to damn one’s enemies was anathema to the views of Christianity. So the stones were not part of the canon of the Celtic church, that strange semi-heretical beast that evolved in medieval Ireland before being returned to the standard Catholic Christian format by the Norman ascendancy over the island.

What We Know About the Stones

Most of what we know about cursing in terms of cursing stones comes from folklore. As well as the remnants of ritual traditions. But when you take a step back and look at it in context, you can see that in most cases it is all about a kind of reverse of positively based powers. This reverse motif occurs everywhere. A spell, for example, is often considered the opposite or the reverse of a prayer. This is also why, for example, you can supposedly hear the Devil’s voice when you play certain records backwards.

What the Cursing Stones Meant in Ireland

In Ireland, cursing stones are generally associated with early ecclesiastical sites and involve the invoking of power by an early Christian saint. As part of the early Christian tradition, pilgrims would often go to these sites and recite a prayer while turning the stone clockwise. Or if they wanted to curse someone, anti-clockwise (against the sun and other natural processes). There is absolutely no recognition in ancient literature of the irony of a Christian Saint (supposedly positive) using such an unchristian-like power for negative effect.

The cursing stones themselves were simple enough, and indeed several survive to this day. One or more round stones, resting in depressions on larger stones. They are of Neolithic origin and are considered to be a subset of the “cup-marked boulders” found across Europe. Sometimes known as bullauns (from the bowl-like depressions in which the stones rested), a common Christianisation of them was to remove the stones and use the depressions to hold holy water. Some still retained their stones and their cursing legend, however, and it is one such stone that concerns us today.

The Incident on Tory Island

From avoiding black cats and ladders to making the sign of the cross to ward off evil, the Irish have a long history of believing in the power of the supernatural. The people of Tory Island are no exception.

Tory’s history is full of mystical stories of blessed clay, magic water fonts, secret charms, and enchanted stones. But most people believe the tales to be nothing more than folk legends. Told to explain the inexplicable and amuse the masses.

The Sinking of the HMS Wasp

However, one tragic incident is still rumoured to be the result of a true Irish curse: The sinking of the HMS Wasp.

The HMS Wasp was a Royal Navy gunboat built in 1880. Mainly used to transport officials to and from the islands for lighthouse and fishery inspections. As well as other official duties. It had visited the island before in 1883 to deliver a supply of potatoes donated to help the poor starving islanders.

In September of 1884 three families on the island could no longer afford rent. Their landlord ordered their evictions to set an example for the other tenants. The HMS Wasp would again set sail for the island but this time instead of bringing relief to the poor islanders, they were bringing the bailiffs and police who were to carry out the eviction.

And so it did, the HMS Wasp set sail from Westport, County Mayo to collect taxes and deliver eviction notices to Inishtrahull Island off Malin Head. It was on course between Tory and the mainland when disaster struck. Around 3:45 AM, the Wasp hit the rocks directly beneath Tory’s lighthouse. Sinking to the bottom of the ocean in less than half an hour. There were only six survivors of the fifty men onboard.

Thoughts on How the Sinking of the Ship Happened

It is uncertain exactly what happened on board HMS Wasp in these early hours of the 22nd of September as it approached Tory Island. The senior officers were asleep, leaving more junior crewmen to man the boat. Possibly not the wisest of choices, given the difficulty of the course, but it was one the ship had sailed many times before.

It may have been the inexperience of these younger men that saw them plot a different course from the standard. Sailing between the island and the mainland, rather than around the outside of the island. Also unusually, the ship’s boilers were not in use, leaving it devoid of steam power. This was not a crippling problem, as the ship was perfectly capable of travelling entirely under sail. But it left the crew with no ability to perform fine manoeuvres in the case of an emergency.

The story goes that the ancient cursing stones were used to let loose a curse upon the HMS Wasp to prevent it coming to evict the Tory Islanders who thought the ship was coming for them. A local priest is said to have been disgusted by these pagan claims of curses, became enraged and said to have taken the stones and thrown them over the cliff.

The magic of Irish Curses and Stones

But stones from Ireland have long held a mystique of their own. Myths abound of the supernatural power of Irish rocks. One reason for Ireland’s strong belief in stone magic could be attributed to the Celts and their religious devotion to rocks. Ireland boasts of the greatest collection of wishing and cursing stones anywhere in the world. The famous Blarney Stone near Cork, Ireland is a perfect example. The legend says that those who kiss the rock will be granted the gift of gab. Many visitors to Blarney Castle risk bending over backwards to reach the stone with their lips in the hopes that a little luck will rub off.

Tory Island is also no exception to the Irish rule. As small as this island is, it boasts two magical stones–the Leac na Leannán or Wishing Stone and the Cloch na Mallacht or Cursing Stone. The Wishing Stone sits at the top of Balor’s Fort. It’s just out on a cliff 100m above the Atlantic Ocean. A wish is granted to anyone who is brave enough to climb on top of it. Anyone lacking such courage may also be granted a wish by successively throwing three stones onto its crest. The Cursing Stone was located at the west end of the island, but it is now mysteriously missing.

The Curses of the Filiocht

Anyone in any doubt as to the Irish ancestors’ attitudes towards hexing and maledictions should take a cursory glance through the Celtic annals and literature—far from eschewing the so-called “darker” side they were only too ready to whip out a curse and fire off a “backward blessing”. The roots of revenge or malicious magic in Ireland is both ancient and surprisingly well chronicled. Providing quite an insight into several aspects of ancient Irish life. Including the fact that human beings haven’t changed very much over the years.

So, the greatest insight into cursing in Ancient Ireland comes to us through that Druidic class, The Fili (poets) who were honoured for their powers of foresight, eloquence, their mastery and knowledge of poetic forms and styles. As well as being the repository of great knowledge from the lineage of Kings to the magical power of words.

They used words to effect magic: special words or special combinations of words; invocations; and charms. They also had powerful words in a more mundane sense as their opinions were closely listened to and they could make or break reputations.

From the complex laws of Satire evolved the rules of cursing in modern Ireland, the “Hard Word”. As time went by this evolved into a set of specific curses, to be performed under specific circumstances. All of these curses are at the discretion of the practitioner and any one of these types can be used for fair or unfair purposes.

They range from “low” curses (i.e. basic folk magic) to “high” curses, immensely powerful spells arranged for an important purpose. In consequence, then there are many anti-curses and charms.

Many Charmers and local practitioners in rural areas made a steady income at one point by charging money to remove curses/jinxes. The likelihood was that if a beast was badly cursed or a human-less severely the local wise woman would be your first port of call. While very severe, life-threatening curses would be referred to the local priest. Of course, the less-then-life-threatening kind of curse was often placed by the wise man/woman in the first place so quite a nice little earner all round.

In the end, The Irish are and will always be renowned for their unrivalled capacity to spin a yarn and tell a story. They have a history full of dark, mysterious legends and telltales. Indeed, the Irish narrative is full of magic, curses, and conundrums but it is also deeply rooted in a revolutionary past of opportunities and festivities.

Have you ever heard any stories involving Irish curses? We would love to know!

Other Worthy Reads after the Children of Lir, or course:

Get to Know Some of the Most Famous Irish Proverbs| Digging into the Secrets of Irish Pookas| Dive into the Finest Legends and Tales of the Irish Mythology| Legendary Castles in Ireland: The Truth Behind the Irish Urban Legends|

Viking History: Insight into the Age of Phantom Travellers

The Children of Lir: A Fascinating Irish Legend