Famous Irish Lighthouses and Where to Find Them 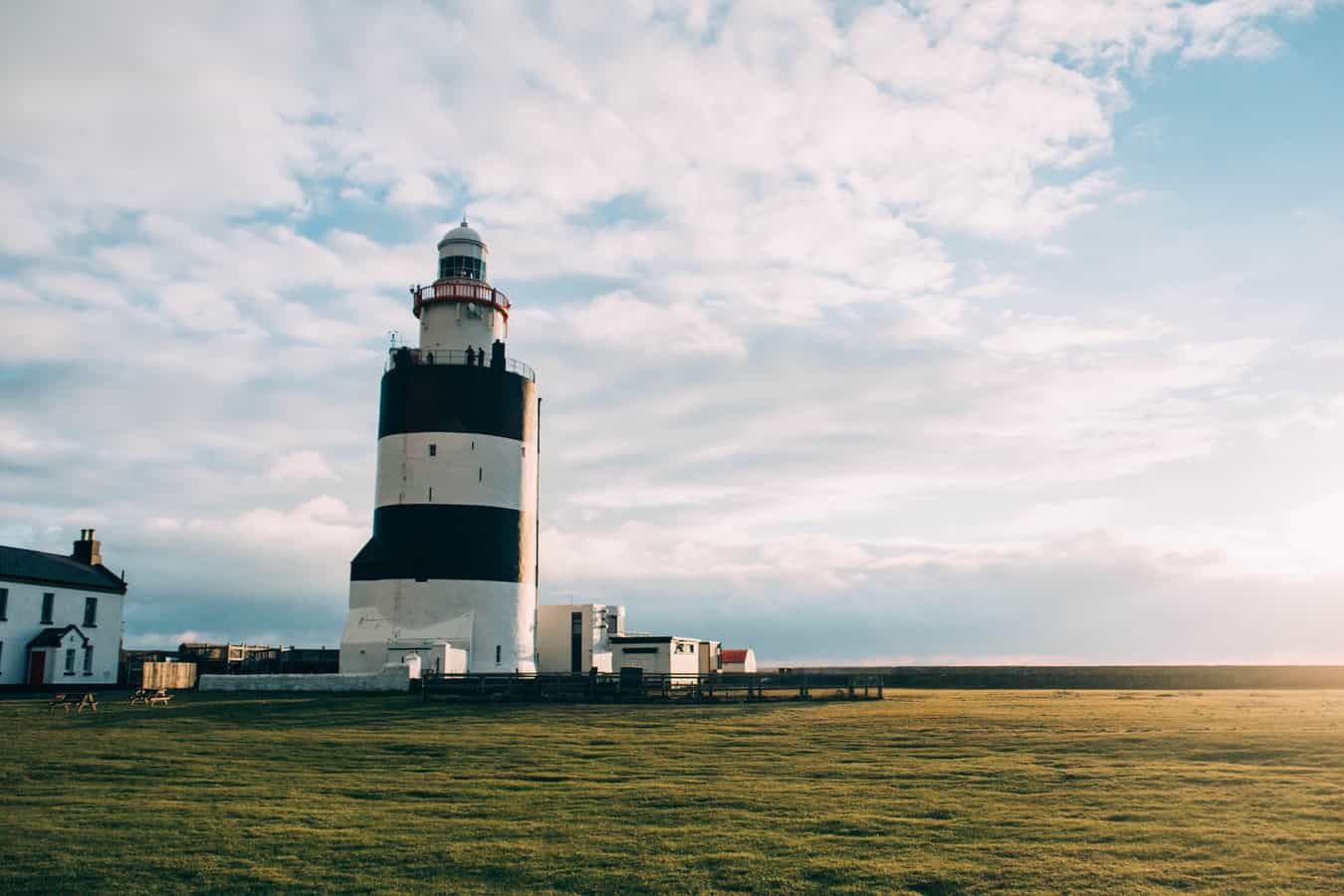 All around Ireland, you will find some of the most unique and captivating lighthouses and with each lighthouse comes an unforgettable history and stories to uncover. A perfect trip idea for visiting Ireland is taking a road trip around Ireland and exploring or even staying in some of these most famous Irish lighthouses.

In this guide, ConnollyCove will take you through some remarkable Irish lighthouses you must visit, what makes them so special and worthy of checking out on your next trip over to the emerald island.

Here’s a small glimpse at some of the most famous Irish Lighthouses:

The Hook of the Irish Sea

First, let’s begin with Ireland’s oldest operating Lighthouse as well as the second oldest in the world, Hook Lighthouse located on the stunning Hook Peninsula in County Wexford.  Hook lighthouse is truly unique in every way, from its stand out black and white stripes that draw you in, along with its marvellous 800 years of history to uncover. It was even voted as one of Ireland’s favourite attractions, so you know a visit here will not disappoint.

As of last year, the current lighthouse structure has been standing tall for 846 years when it was first built by Knight Willam Marshal somewhere around the 5th century. This Irish lighthouse offers people an opportunity to experience one of the most interesting examples of medieval architecture in Ireland.

In 2011, the lighthouse was opened as a tourist attraction and the old keeper’s house was transformed into a visitors centre while still remaining as a fully operational lighthouse. Through guided tours, people can experience Hook lighthouse up close and personal, as they are taken on a memorable trip back in time.

During a tour, you will uncover some incredible stories from life inside this lighthouse, life as a lightkeeper as well as learning all about the top-class technology that helps keep people safe while out at sea today.

You must also step out onto the lighthouse’s four-storey high balcony to be truly captivated by the gorgeous sea views on display in Ireland’s Ancient East.

A Light for Famous Vessels

Next located on the edge of Belfast Lough in County Antrim, is Blackhead Lighthouse, perfectly located for you to enjoy the stunning Northern Irish coastline. This Irish lighthouse was first built and started safely guiding ships and vessels in 1902.

During Belfast’s golden age of shipping, the Blackhead Lighthouse played an important role in guiding many famous ships to and from the city including the historic Titanic RMS. Blackhead lighthouse offers an amazing example of Northern Ireland’s maritime heritage for any history buffs, this is sure to be a worthwhile visit.

For those wishing to have an unforgettable experience in Ireland, you can stay in the Blackhead lightkeepers houses which are located right next to the lighthouse. An experience like no other to soak up all that heritage and breathtaking views that come with staying in an Irish lighthouse. Each of the lightkeepers’ houses includes fascinating fragments of lighthouse paraphernalia, such as a whistle pipe that was used to wake the keepers up for their next watch.

Staying here will leave you inspired, within an unforgettable setting, where you can wake up to the sunrise and watch the beautiful sunset every evening.

In Donegal along its magnificent Wild Atlantic Way, lies a very popular Irish lighthouse known as Fanad Head. This lighthouse stands tall between Lough Swilly and Mulroy Bay and has even been voted as one of the world’s most beautiful lighthouses. We can understand why as its simply stunning and stops you in your tracks once you see it, along with the incredible scenery that surrounds Fanad Head lighthouse.

Even the journey to reach the lighthouse isn’t short of spectacular with views from the Inishowen Peninsula and the Atlantic Ocean. All this makes it easy to understand why it was voted as one of the most beautiful lighthouses in the world, and you will only truly understand why when you check it out for yourself.

Fanad Head lighthouse was first built back in 1812, after a devastating shipwreck of HMS Saldanha which identified the need for a lighthouse within the area to prevent further incidents happening.

Being around for so long comes with an intriguing history which you can dive further into through a guided tour of the lighthouse. Guided tours are a must -experience to get an amazing insight into the rich and colourful history that lays here.

Fanad head will definitely not disappoint when you visit and you will want to make sure you have your camera in hand to capture the unforgettable beauty.

County Cork is home to a few famous Irish lighthouses but one, in particular, is Galley Head which was first built during the late 18th century. Galley Head was once considered the most powerful lighthouse in the world during its construction. Since then it has become an iconic landmark in Ireland. During both World Wars, this Irish lighthouse helped guide many British and German ships along the ocean and its strong light could have been seen in clear weather as far as 30km.

The stunning white lighthouse sits high above the fierce Atlantic Ocean on the pretty headland of Dundeady Island and near to the charming town of Clonakilty.

Through the Irish Landmark Trust, they have helped to transform two of its lightkeepers houses into the perfect accommodation for guests offering a place to stay in Ireland with a difference. The place offers the ideal location to enjoy a range of outdoor pursuits and the area is often popular for dolphin and whale watching.

The Wild Atlantic Way on the west coast is one of Ireland’s most famous parts with its unmatched scenery and here you’ll discover the spectacular Loop Head lighthouse. Located on the top of the peninsula in West Clare, where land meets the sea is Loop Head. It will quickly draw you in and you’ll want to find out more about what lies inside this magnificent lighthouse.

Since the late 1600’s there has always been a lighthouse on Loop Head, with it originally being a coal-burning brazier attached to the lighthouse cottage, where the lightkeeper would stay. Over time the lighthouse has been changed and improved a few times with the first tower lighthouse being built in 1802 and then again replaced with a newer version in 1854.

Today through the lightkeeper’s cottage, visitors can dive into the history of the place with its interactive exhibits or take part in a lively guided tour that takes you to the lighthouse tower and will fill you up on remarkable stories from the past before ending the tour out on the lighthouse balcony for mesmerising views as far as the famous Blasket Islands to enjoy.

If one visit isn’t enough, treat yourself to a lovely stay at the lightkeeper’s cottage with its comfortable self-catering accommodation which is embedded with lots of character from the maritime past.

Ireland’s Only Upside Down Lighthouse

Lighthouses in Ireland come in all different shapes and sizes with each one being unique in its own way. One that definitely stands out against the rest is Rathlin West Light. What makes this Irish lighthouse so unique? Well, it only happens to be upside down, not very often do you hear of an upside-down lighthouse, so that alone makes it special and different.

This lighthouse is located on Rathlin Island, in County Antrim which visitors can only access by boat. We promise it is worth checking out, even the sea experience getting over is exciting as the area is home to one of the largest sea colonies in the UK.

Just this year(2019), Rathlin West Light marked 100 years of safely guiding boats at sea and has become a popular attraction in Northern Ireland, on it’s only inhabited off-shore island. It’s signature red signal shines 23 miles out to sea from its quirky lighthouse built onto an edge of a cliff.

Prior to 2016, there was no access to the lighthouse but now it has been transformed to provide an exciting visitor experience, where you can uncover the lighthouse history, see amazing wildlife and surround yourself in the unspoilt beauty of the area. Truly one of a kind lighthouse in Ireland that will leave you impressed in every way.

Located in Belfast is another very unique lighthouse worth adding to your list of things to see when visiting Northern Ireland’s capital city. The Great Light is one of the world’s largest and rarest lighthouse optics ever created. It’s definitely not your typical lighthouse but that’s why it’s special and intriguing, as it’s something you most likely have never seen before.

The Great Light is around 130 years old, reaching seven metres tall and ten tonnes in weight, it’s a unique heritage object that perfectly fits in with Belfast’s unforgettable maritime past. It’s something that could never be replaced, providing a rare maritime artefact in the heart of the city.

It has also produced one of the most incredible light beams to ever shine making sure it does live up to its iconic name. The Antrim Great Light adds an interesting part to the Belfast Titanic Walkway, where history is never forgotten and the great light will not fail to impress lighthouse fanatics or history buffs.

To finish up our guide to some of Ireland’s most incredible lighthouses we can’t forget to mention, St. John’s Point in Killough, County Down. It’s definitely captivating with its striking black and orange striped colours, making it stand out within the lovely County Down scenery.

This is another lighthouse where people can both visit and stay and dive deeper into its heritage and history that has been created since the 1800’s when the lighthouse was first built.

Escape your boring routine and live life as lightkeeper (even if it just pretend) in the idyllic location of St. John’s Point. There are two lighthouse keeper cottages to stay in Ketch and Sloop, both brimming with character and comfortability for a unique stay in Ireland.

These are just a few of the 70 amazing lighthouses located around Ireland, each offering their own tales to tell that will intrigue anyone who has an interest. Why not plan the ultimate road to explore all these amazing lighthouses, stopping off at each lighthouse destination to uncover the surrounding areas. It’s truly a one of a kind way to experience the emerald Ireland and you’re sure to be filled with lots of beauty and heritage along the way.

Do you have a favourite lighthouse in Ireland or even around the world? Share with us in the comments, we would love to know!

Made in Belfast: Culture Night