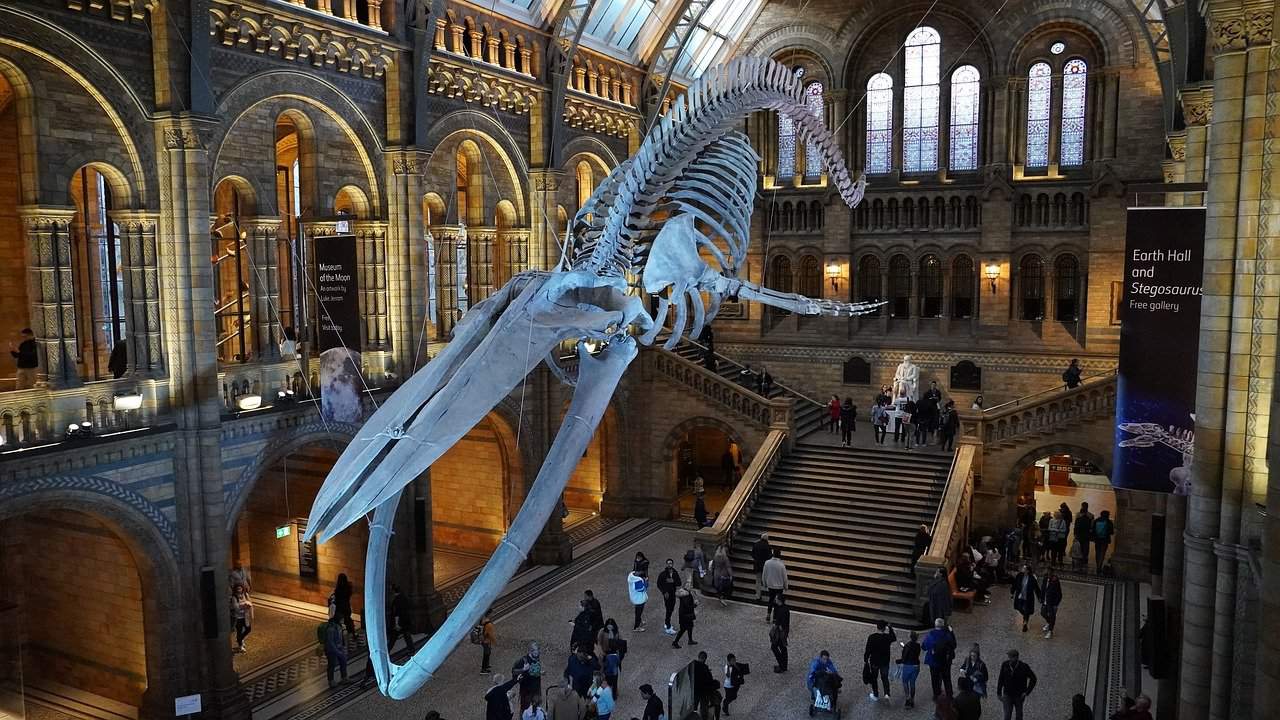 Another one of the many museums/galleries in London, you will come across the Natural History Museum. Which is one of our personal favourites and we will tell you why, so keep reading on.

Renown for its world-class visitor attraction and the amazing science research centre, it’s the perfect place for the whole family to enjoy and learn. You will be able to check out a unique collection about the biggest challenges facing the natural world today. As well as exploring and learning about the range of specimens that are home to the Natural History Museum through a variety of programmes, exhibitions and events all year long.

Over four million people visit the beautiful building of the Natural History Museum each year, and once you’ve seen it for yourself, you’ll understand why it’s so popular. Besides being warm and dry, there are over 70 million fascinating specimens from the natural world on display there, from tiny creepy crawlies to huge dinosaur skeletons.

Originally part of the British Museum, the Natural History Museum began with a donation to the country of the collection of Sir Hans Sloane in 1753. The collection became part of the British Museum and was housed in Montagu House, the first home of what was to become the British Museum. But the collection received such poor treatment from incompetent staff there, the department fought to become a separate entity. The Principal Librarian was known for his contempt for natural history, one staff member threatened to destroy any shell that wasn’t listed in a certain scientific text, while another destroyed all the labels of insects identified by a rival.

Moreover, Sloane, who was a physician, is said to have collected “natural curiosities”. When a second collection by botanist Joseph Banks (who travelled with Captain James Cook) was added to Sloane’s collection, museum curators began to see a need for a separate location for these items. Sloane desired that his collection remain together at his death, and created a Board of Trustees to oversee its sale to the government for the bargain price of £20,000.

A competition was held to determine the architect for the new building. The winner was Captain Francis Fowke who, unfortunately, died before he was able to complete his design. The honours then went to Alfred Waterhouse. Fortunately, the Natural History Museum got its own building in 1881, but didn’t fully get its independence and own board of directors until 1963 and was still known as British Museum (Natural History) right up until 1992. In 1986 the Geological Museum was merged with the NHM.

Architecture of the Natural History Museum

The Natural History Museum building is as striking as the exhibits it contains. Its high-spired towers soar above much of the skyline and its huge grand facade ─ inspired by the basalt columns at Fingal’s Cave in western Scotland ─ is awe inspiring. The building integrates the romantic and the practical in an eclectic whole: German Romanesque stylistic use of dramatic arches and towers, decorated with a rich sculptural program of terra cotta, and a practical use of structural iron and contemporary mechanical systems.

The building has a bilaterally symmetrical plan around a central entrance which leads to a cathedral-like hall with grand staircase to second-floor galleries. The street facade marches 680 feet along a Kensington street. Two three-story wings of side-lit galleries with tower pavilions at their ends flank a slightly projecting central entrance with two towers around a recessed arched portal.

Top lit galleries have iron and glass roofs in the tradition of Victorian train buildings with daylighting admitted from the lower roof slopes. Water, ventilation systems and fire protection systems are integrated with the building massing (in tower elements) and the ornamental systems. Don’t forget to look up at the intricately painted ceiling panels in the Central Hall!

The Exhibits of the Natural History Museum

The museum is divided into different colour-coded zones, each focusing on a specific aspect of life on earth; the Life Galleries, Earth Galleries, Wildlife Garden, and Temporary Exhibitions. Within the Life Galleries are displays dedicated to Dinosaurs, Ecology, Human Biology, Mammals, Primates, the Origin of Species, and Minerals, which all provide a fascinating insight into science and nature; with the chance to have free tours and get involved in a topical discussion. The museum also hosts the very popular Wildlife Photographer of the Year competition.

The Earth Galleries focus on the geological history of the earth and the solar system. There you can see the earth seen from outer space and a simulated earthquake and volcanic eruption. There’s also a large collection of minerals and stones. Additionally, the collection of dinosaur skeletons at this gallery is one of the museum’s biggest attractions. There are several life-sized models in the Dinosaur hall and you’ll also encounter the skeleton of a Diplodocus in the central hall.

The Wildlife Gallery is a one-acre garden space on the west lawn of the museum, where different British habitats are recreated, including marsh, ponds, oak and bluebell woods, hedgerows and grass meadows.

The museum also presents an ongoing program of Temporary Exhibits with themes ranging from artwork depicting animals to Myths and Monsters, Predators, photographic competitions, and more.

Highlights at the Natural History Museum:

These are just some of the popular exhibitions that you need to check out at this Museum. The Natural History Museum also puts on a variety of events that are fun and engaging. Such as CSI live, Silent Disco’s, sleepover cinema for grown-ups and so much more.

Worth mentioning that perhaps the most famous exhibit there is Dippy the Diplodocus, a 70ft plaster-cast dinosaur skeleton that greets you the minute you walk into Museum’s spectacular Hintze Hall. Much-loved and seen by an estimated 90 million visitors, Dippy’s been standing guard since 1979 but is already going out on tour around the country. In its two-year absence, Dippy will be replaced by the equally impressive four-tonne blue whale skeleton.

The Natural History Museum has a range of cafes and restaurants, but there is also the option to bring your own lunch with you, which you can enjoy in the picnic area. If you fancy browsing the museum’s shops afterwards, you can pick up souvenirs from models and fossils at the Dino store, to treasures from planet earth in the Earth shop.

Filming at the Natural History Museum

The Museum has served as a location in classic children’s adventures such as One of Our Dinosaurs is Missing, Loch Ness and Paddington. Climatic scenes in Poirot and Spooks have also been set and shot here. The building’s sweeping grandeur has also led to it doubling for some more unusual locations such as an Intergalactic Space Palace in Jupiter Ascending and Angelina Jolie’s base in Lara Croft: Tomb Raider. It has been most recently seen in The Mummy remake. A rear and front car park provide excellent, easy-access loading bay facilities for production teams and vehicles. Read more on filming at the museum here.

Open daily at 10 am, the Museum closes at 5:50 pm. It’s open all year round (except for 24th, 25th and 26th December). Admission is free, but there is a charge for some tours, events and temporary exhibitions.

There are three great gift shops. In Hintze Hall, you’ll find the Museum Shop for nature-inspired items. Head to the Red Zone for the swanky Cranbourne Boutique for exclusive fashion and luxury decorations. Finally, there’s the Dino Store at the exit of the Dinosaur gallery, for toys, games mugs and clothing with a prehistoric theme.

If you’re here with children under seven, you can borrow Explorer Backpacks from the main Hintze Hall information desk. Inside there’s an activity booklet, safari hat and binoculars. They’re free of charge, but you will need to leave some form of ID as a deposit.

Getting there is easy; the museum, along with the neighbouring Science Museum and Victoria and Albert Museum, are accessible directly from the South Kensington tube station. Just follow the signposted route through underground pedestrian tunnels from the station.

The museum makes for a great family day out, an original event venue, and the content is simply fascinating! Have you ever been to the Natural History Museum in London? Or are you planning a trip there soon? We would love to hear about any experiences you have 🙂

Checking out some other locations we have visited in London that you may also enjoy: The National Gallery, Kensington Palace, Kensington Gardens, Westminster Abbey, Buckingham Palace.

Top 10 Things to do in London for Kids