County Mayo: The Perfect Blend of History, Culture and Fun

Mayo is the third largest county in Ireland, it is the place you imagine seeing when planning a trip to Ireland. From it’s inviting Irish charm, its wilds unspoilt nature and landscapes making it hard not to fall in love with the County.

It is a place to explore if you are interested in culture, heritage and history as County Mayo is steeped in all three. A destination that has something to offer all visitor. Surrounded by the beautiful Wild Atlantic West makes County Mayo such an alluring place to spend your time.

Towns and Villages in Mayo Worth Visiting

With Mayo being the third biggest county in Ireland, it offers you a variety of small and large towns and villages to visit. County Mayo is a place full of character and charm and each town has something unique and inviting about them. If you’re looking for a relaxing trip to County Mayo the smaller villages will be perfect for you. The bigger towns offer a livelier atmosphere bursting with things to do.

This is probably one of the most popular towns to visit in County Mayo. Westport was designed during the 18th century by James Wyatt. It has become one of Ireland’s top tourist areas. It is well-known for its stunning tree-lined boulevard known as ‘The Mall’. Every year the place seems to get more popular with visitors coming from all around the world. Westport boasts great restaurants known for its incredible seafood that you must try. You’ll also find a lovely selection of traditional pubs that provided a friendly and warm atmosphere that isn’t to be missed.

One of Westport’s biggest attractions is the Westport House and it’s connecting Adventure Park. Offering a unique blend of culture and adventure with that welcoming Irish hospitality.  It is also home to Croagh Patrick which is considered one of Europe’s best places of Pilgrimage. You’ll also find an 18-hole Championship Golf Course with the combination of great golf and scenic views.

A great place to enjoy horse riding and pony trekking as there are a few local equitation centres. Also, not to be missed is Westport’s great selection of sandy beaches; many of which are Blue Flag winners.

Westport is home to many interesting and exciting festivals throughout the year. From the Westport Horse & Pony Show, the Westport Folk & Blue Grass Festival, the Sea Angling Festival and the Westport Music Festival.

County Mayo is home to the largest island in Ireland known as Achill Island. The island is popular for its beautiful sandy beaches, sea cliffs and welcoming hospitality that brings people back again and again.

The Island is also home to one of County Mayo’s best festivals, The Achill Seafood Festival. Held usually in July is your chance to try some of the best seafood in Ireland along with plenty of music, fun and good times.

Another great part of Achill Island is ‘Scoil Acla’ which is one of Ireland’s oldest summer schools. At the school, they offer a variety of workshops on traditional music, set dancing, and creative writing. There are also art exhibitions, painting courses and an opportunity to learn Gaeilge (Irish language) here. 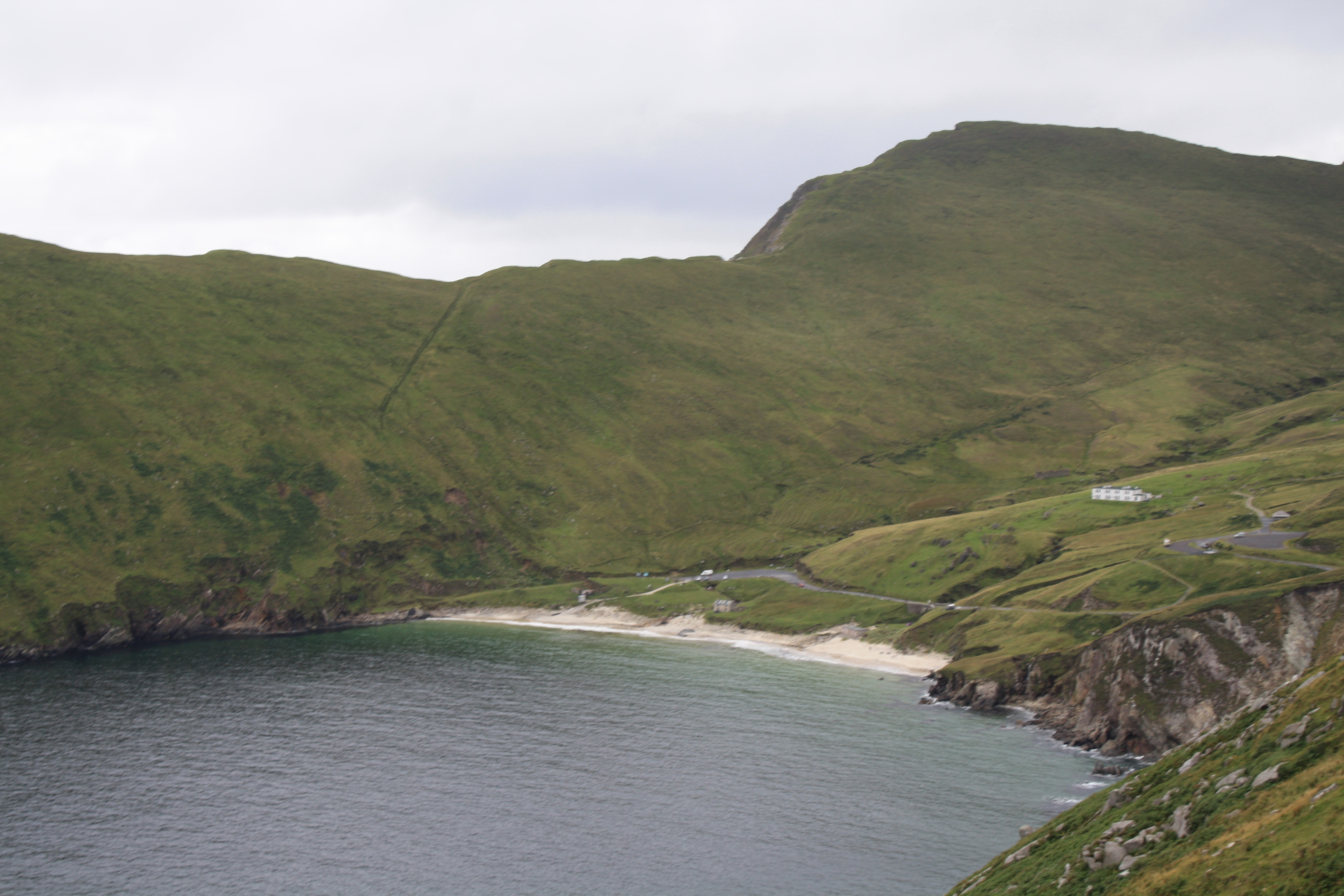 This is one of the quieter villages found in County Mayo but offers one of the best locations. The village lays between the shores of Clew Bay and the Famous Croagh Patrick mountain. One of its most notable features is the National Famine Monument, an impressive sculpture created by John Behan that depicts a coffin ship. It was created to remember the people perished during the Great Famine.

The village has been popular amongst pilgrims all around the world as during the 1400s an abbey was founded here by Pope Callistus 3. And it is also the starting point of the ancient Croagh Patrick Mountain.

Located near the village is lovely Berta Beach that is an EU Blue Flag Awarded beach, perfect to head to all year round.

Each year Murrisk hold their annual Pattern Day Festival usually on the last Sunday in August. Pattern Day is for both young and old with a variety of events held all day. Firstly, starting off with a mass at the Murrisk Abbey followed by dancing, music, children’s entertainment, stalls and much more.

Next is the pretty town of Louisburgh that was first constructed in 1795 by the 3rd Earl of Altamount, John Denis Browne of Westport. It was created for Catholic refugees that were escaping sectarian conflict in Northern Ireland. The town is named after Browne’s uncle, Captain Henry Browne who fought during the battle of Louisburg in 1758. To this day the town still holds many of its 18th-century features. It is also rich in archaeological heritage with over 700 monuments and 20 areas of scientific interest.

Louisburgh is a place full of character, charm and awe-inspiring natural beauty. It is popular for its beautiful unspoilt beaches such as Carramore and Old Head. Louisburgh is a great location if you enjoy walking, climbing and exploring as there are various walking trails to be discovered that is met with incredible scenery.

If you are looking for things to do in Mayo, well you are in luck as the country is filled with lots to offer. It is home to many offshore islands that offer a rich history and heritage to be explored. Take to the sea or the mountains and check out the rugged landscape and amazing coastal scenery. Whether your visiting for fun, culture or heritage you’ll find it all here and much more.

A Trip to Westport House

One of the top things to do while in County Mayo is to visit the impressive heritage site that is Westport House. The house dates back to 1500s when the legendary Pirate Queen Grace O’Malley used the house as one of her many castles. Westport House has now become a treasure of Irish History where visitors can tour over 300 years of Irish heritage in the house. As well as enjoying the many attractions available on the grounds of the estate.

A tour around the house is not something you would quickly forget with over 30 rooms to explore, where visitors can immerse themselves into the life of 16th century of Ireland when it was ruled by Grace O’Malley.

If you’re lucky enough to be visiting Westport House during one of their birds of prey demonstrations, you will be in for a treat. Here you’ll get the opportunity to meet various falcons and owls and get to see them in action as they fly around the grounds. This is one of those unique experiences that will make your trip even more memorable.

If you enjoy being outdoors, then the 40km stretch of trail known as the Great Western Greenway that runs between Achill Island and Westport Town is a must. We highly recommend hiring one of the electric bikes and touring around this trail.  You can rent these bikes with Clew Bay Bike Hire that have been number one on TripAdvisor for 7 years in a row and received the ‘Best Tourism Service Provider Award at Mayo Business Awards in 2015.

These electric bikes are pretty cool, helping you travel for longer and giving you a boost when going uphill. It makes the journey more enjoyable and is one of the fun things to do Mayo; where you get to experience some beautiful scenery and nature along the Great Western Greenway trail.

The idea of coasteering might be something new to you but it’s becoming an exciting adventure activity to enjoy in Ireland. In County Mayo, there is ‘Wavesweeper Sea Adventures’ that offers thrilling coasteering adventures. For those who are unsure of what coasteering is, it is where you suit up in a wetsuit and helmet and swim along Ireland’s hidden caves and jump off cliffs. It doesn’t matter how experienced you are as experts’ guides will be there to give you assistance around the rocky coast. This is one of the most exciting activities to do in County Mayo by exploring Erris Coast and finding your inner dare-devil.

While in County Mayo you must take a trip to one of their most magnificent beaches located on Achill Island. It is a 3km long Blue Flag Awarded Beach that is considered one of the best surfing spots in Ireland. Keel Beach is also popular with other water sports including sea kayaking, windsurfing, sailboarding and boogie-boarding. Take some time to climb the nearby cliffs as you’ll be mesmerised by the views on display. Overall Keel beach is sure to be a hit and a great place to relax and take in the surroundings.

A must-see in County Mayo is Croagh Patrick that is considered the holiest mountain in all of Ireland. The history of the mountain stretches back 5,000 years and its religious significance dates to the time of the pagans. It is thought that people gathered here back then to celebrate the start of harvest season.

Croagh Patrick is also famous for its associated with Saint Patrick, the Patron Saint of Ireland. It is believed that he fasted at the summit of the mountain for forty days back in 441 AD. Many people since then have followed in his footsteps using the mountain as a place of worship.

At the top of the summit, there are stunning views of Clew Bay and the surrounding Mayo that makes the hike up worth it

We could go on and on about all that County Mayo has to offer but then we would leave no surprises for you to discover for yourself. But we promise you Mayo is one of those special places in Ireland that will have you coming back for more. It offers the perfect blend of history culture and fun all in one place.

Castle Ward: A Place with a Remarkable History