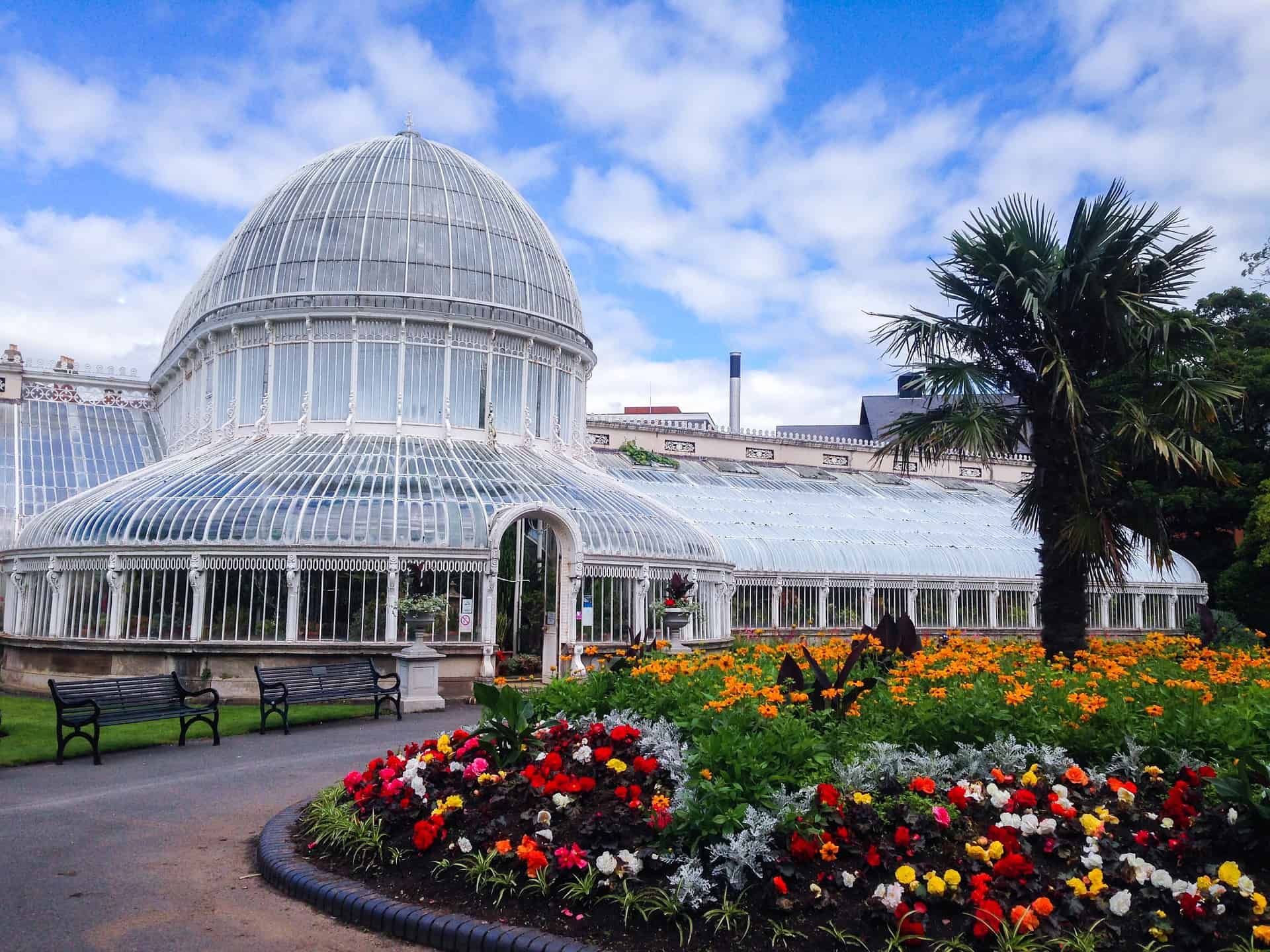 Taking up 28 acres of south Belfast, Botanic Gardens are located on Stranmillis Road in Queen’s Quarter, with Queen’s University nearby. The Ulster Museum is also located at the Gardens main entrance.

As with many parks in Belfast – it is open from 7:30am in the morning and closes at dark – but since this is a city centre park and busier than many, it does tend to stay open much later than most parks. There is street parking around the Gardens for anyone driving.

The present owner of the gardens is the Belfast City Council. A popular and trendy street from Shaftesbury’s Square called Botanic Avenue leads straight into the side entrance of the park via the back of Queen’s University.

Aside from the beautiful horticulture displays, the garden features children’s playground, bowling green and beautiful walks around the grounds. Situated near Queens University Belfast, the Botanic Gardens are considered to be a representation of Belfast’s Victorian heritage.

The Gardens are also a popular meeting place for residents, students and tourists. So if ever asked where to go for greenhouses in Belfast – it is Botanic Gardens. The gardens are one of the great places to walk in Belfast, there are also plenty of little coffee shops in the streets around the grounds.

The Palm House conservatory is located within Botanic Gardens Belfast , since it was first established by the Marquess of Donegall in 1839 and work was completed on it 1840. Designed by Charles Lanyon and built by Richard Turner, the Palm House consists of two wings: the cool wing and the tropical wing.

One of the most extraordinary features of the Palm House was its 11 meters tall Globe Spear Lily, which is native to Australia. It finally bloomed in March 2005 after a 23-year wait. The Palm House also features a 400-year-old Xanthorrhoea. The Palm House in Botanic Gardens is definitely one of the places to go in Belfast – even just once.

Also located within the Botanic Gardens, the Tropical Ravine House was built by head gardener Charles McKimm in 1889 with a unique design. A sunken ravine runs the length of the building, with a balcony on each side. The most popular attraction is the Dombeya, which flowers every February. Moreover, summer days in the Tropical Ravine are perfect for playing, relaxing, and soaking up the rays.

Tennents Vital festival was held in the gardens from 2002 to 2006. The festival included numerous world-renowned performers, including Kings of Leon, Franz Ferdinand, The Coral, The Streets and The White Stripes, as well as Snow Patrol, The Raconteurs, Editors and Kaiser Chiefs.

In 1997, U2 played their first Belfast concert in over a decade as part of the PopMart Tour with 40,000 fans in attendance.

Every year from 2011 to 2016, the Botanic Gardens was awarded the Green Flag Award, which recognises the best open spaces in the UK.

On any semi-warm day – Botanic Gardens will be flooded by young and old seeking to catch some sunshine and work on their tan. It is particularly popular with students – as it is so close to Queen’s University where many studies and the surrounding streets where they live.

Explore All hidden gems of Belfast and ready for the best laidback vibes.

Queen Victoria visited the Botanic Gardens twice during her reign. Her first visit was on August 1849 and her second visit was during her Diamond Jubilee in 1897.

Considered to be the largest museum in Northern Ireland, Ulster Museum is located within the Belfast Botanic Gardens and takes up around 8,000 square meters of display space. It features a wide variety of artefacts, including fine art and applied art, archaeology, ethnography, treasures from the Spanish Armada, local history, numismatics, industrial archaeology, botany, zoology and geology.

Have you ever visited Botanic Gardens in Belfast? Located near Queens University and Ulster Museum? Let us know in the comments below.

Belvoir Park Belfast - The Forest In The City