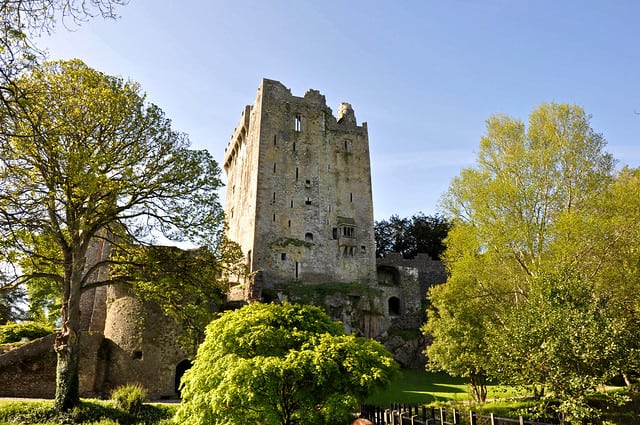 Located near county cork, you’ll find the captivating medieval Blarney Castle, built over six hundred years ago. This Irish castle is filled with endless myths and legends that would attract anyone to see it up close and personal, to uncover its incredible stories.

The castle is most famous for being the home of the Blarney Stone, according to Irish folklore, the stone will bring luck to those who kiss it.

But there is so much more to this remarkable castle than meets the eye. Blarney Castle and Gardens is filled with an alluring history and a rich culture that has become one of the most visited castles/attractions in Ireland.

Keep reading to find out more on this medieval Irish castle and why you need to add it to you’re an Irish bucket list.

The Blarney Castle which visitors see today is actually the third castle to be built on its location. The current structure dates to the 15th century, but the actual history of the castle dates back a further 500 years.

The first Blarney Castle was created in the 10th century and simply consisted of a wooden structure. A few centuries later, they replaced the wooden structure with a stone fortification, popular during that time period.

During 1314, the famous Gaelic Irish ruler and King of Munster, Cormac McCarthy gave Robert the Bruce of Scotland 5,000 soldiers to help fight against England in the Battle of Bannockburn. The soldiers managed to heroically defeat King Edward II’s English side. In return for his kindness, Bruce presented McCarthy with a gift, this gift was the ‘Stone of Destiny’.  This stone would late be known as the ‘Blarney Stone’, which McCarthy placed in his castles battlement.

A century later, new King Dermot McCarthy demolished the stone structure and replaced it with a much larger ‘Blarney Castle’. The Blarney stone was kept safe and was moved into the new structure. Blarney Castle was beautifully built on the edge of a cliff, surrounded by the stunning Irish landscape, but the new structure was also very captivating in its own right.

There was a lot of rivalry around the Blarney Castle, the McCarthy clan had to fight off many other powerful Irish clans such as the Desmond Clan to keep possession of the castle.

In 1586, Queen Elizabeth the 1st, sent the Earl of Leicester over to Ireland to take over the Blarney Castle and the surrounding land from the McCarthy’s. However, the Irish clan found a way to delay the negotiations which frustrated the Queen, and so the McCarthy family was able to keep hold of Blarney Castle until they reached the Confederate War.

Not long after the war, Oliver Cromwell, the general of Lord Broghill seized many properties in Ireland including that of the Blarney Castle. Although in 1658, after Oliver Cromwell’s death, the McCarthy family took back the castle which was rightfully theirs.

In the few centuries after this, ownership of Blarney Castle change many times. The Hollow Sword Blade Company from London obtained the land when the McCarthy clan had disappeared. Then in 1703, the lord chief Justice of Ireland bought over the castle land from the English company. However, he was fearful that the powerful McCarthy clan would come back, so he sold the property onto Sir James Jeffreys,  the governor of Cork City.

James Jeffery and his family transformed the land into an estate village which included 90 houses, a tiny church and three mud cabins.

The Jefferey family married into another well known Irish family the Colthrust family, and even today the castle belongs to their descendants.

From the late 1800s to the present day, the castle has grown into a popular destination and many hope to kiss the Blarney Stone. Past visitors to Blarney Castle included Winston Churchill and President Willam H. Taft.

For a remarkable 200 years, people all around the globe have been making their way to Blarney castle to climb the steps up to kiss the Blarney stone and hopefully be given the gift of Eloquence (so Irish legends tell us).

Although its powers may be questionable and its stories definitely create a lot of debate between people. One thing is for sure though, you’ll only ever know if you take a visit to the castle and see the mysterious Blarney Stone. Check out here to find more about the fascinating stories surrounding the Blarney Stone.

Although the Blarney Stone may be the most popular attraction at the castle, there is so much more to discover and enjoy on a visit to this famous castle.

It is home to the beautiful Blarney Castle Gardens; offering a diverse range of surroundings to take in from tranquil to mystical all in one place. Make your way to the top of Blarney castle and be in awe of the magnificent landscape on display including 60 acres of beautiful parkland of gardens, avenues and waterways.

There is so much to love at Blarney Castle, it will fill you up on heritage, famous Irish myths and legends and a strong history that’s unforgettable.

Have you ever visited Blarney Castle? What did you enjoy most about your visit and did you get to kiss the magical Blarney Stone? We’d love to know about your experience in the comments below!

Leap Castle: One of the Most Notoriously Haunted Castles| Irish Castles: Where History and Paranormal Activity Combine | Legendary Castles in Ireland: The Truth Behind the Irish Urban Legends