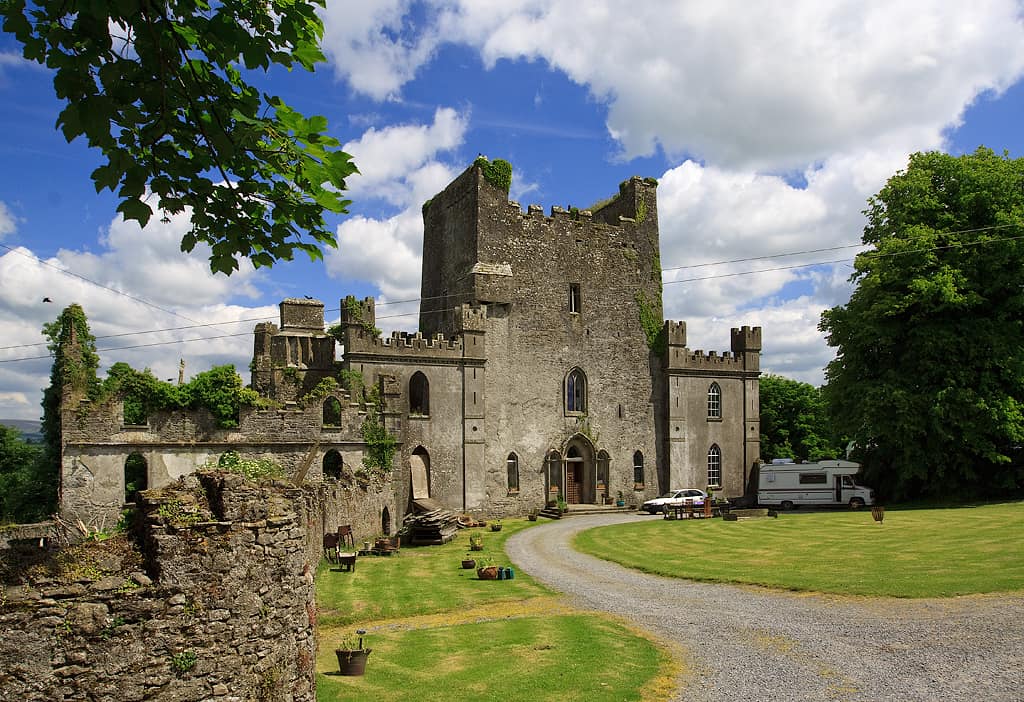 There are many incredible castles in Ireland, offering interesting ancient stories worth discovering and one that won’t let you down is Leap Castle in County Offaly.

Every year people all around Ireland and further afield flock to Leap Castle to uncover its ghostly stories and stunning beauty that is forever captivating people on a visit to Ireland.

The History of Leap Castle

Leap Castle is one of the most lived in castles in Ireland, it has seen many different families through various generations call the castle home, offering a very fascinating history.

The history of the construction is somewhat ambiguous but its believed somewhere between the 12th and 15th century the castle was built by the O’Bannon Family. The O’Bannon clan were highly influential at the time in Ireland. They were part of the secondary chieftains, ruled by the O’Carroll Clan.

The Castle has a very troubled past that has seen lots of blood and violence being shed within its walls.

It was also originally known as ” Leim Ui Bhanain” which translates as the “Leap of the O’Bannons”. This was to refer to its origins with the O’Bannon Family, who owned much of the land surrounding the castle.

Irish Legend tells us that two of the O’Brannon brothers were fighting to be the chieftainship of their family. To settle their argument of who should be chieftainship, they challenged each other to a battle of strength and bravery.

The challenge was that they both had to leap off a rocky outcrop, where the castle was to be built on. Whoever out of the two brothers survived, would lead the O’Brannon clan and be in charge of the castle construction. This is where the violence of the Castle began, its foundations were filled by greed, power and blood.

However, the O’Brannon’s rule over Leap Castle was a short one, as they were taken over by the fierce O’Carroll Clan. They were also a very ruthless and powerful Clan of that time in Ireland. The O’Carroll Clan’s seizing of the Castle brought with them a spine-chilling legacy of more violence and ultimately helped to give the hauntingly title that the castle is known for today.

As legend has it, through their time of owning Leap Castle, many brutal massacres took place there. So it no surprise that the castle is haunted after centuries of violence that occurred within its walls.

When the chief of the O’Carroll Family died, he didn’t leave a successor to take control of the Castle. This then turned into another brother battle, for who would take ownership and inherit the castle and all the power that came with it.

The two brothers were very different, the oldest Thaddeus, was a priest and his brother Teighe believed that the castle was rightfully his. Teighe took the power into his own hands and killed his brother while he’s was performing mass in the castle chapel. Pretty ruthless but that was the way people lived back then.

The Bloody Chapel and Ghostly spirits that Live in Leap Castle

Due to this, the chapel went on to be known as “The Bloody Chapel”. There have even been witnesses that claim Thaddeus’s spirit still roams around here.

But that isn’t the only frightening thing hidden away at the castle, its believed that behind the walls of the Blood Chapel is the remains of hundreds of skeletons.

There is also the ghostly spirit simply known as ‘it’ that has been famous for residing at the Irish castle. Those who have been witness to ‘it’ say that’s it’s a small creature, like the size of sheep with a deteriorating face, that’s sure to scare most people. Many People have even claimed to see shadows appearing at the Priest’s House. The house has been empty since it was burnt in 1922.

Not forgetting one of the most famous ghosts who reside at the castle ‘The Red Lady’. Many people claim to have seen a woman carrying a dagger, looking angry, roaming around the castle. It is believed she is the ghost of a woman who was captured and tortured by the awful O’Carrroll family. She got pregnant by one of the family members, who horrifically killed her baby and she ended up killing herself as the pain was too much to bear.

These are just a few of most notorious spirits seen at Leap Castle, on a visit to the castle you can uncover more about its past and hear more stories on the haunting that has taken place there!

Also, check out other blogs that might interest you:

Best Free Things to do in Northern Ireland