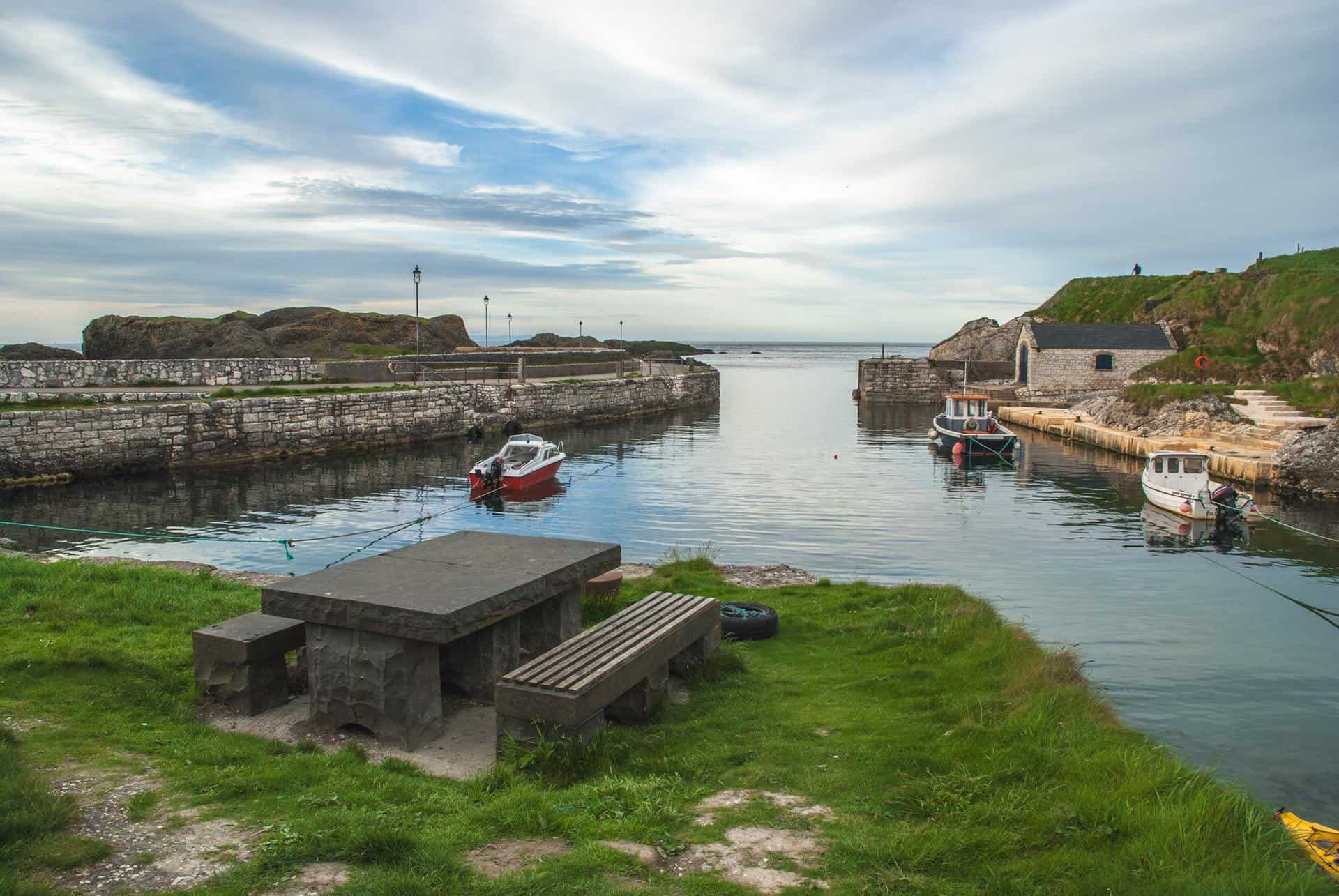 Known as a ‘raised beach’, Ballintoy’s name comes from the Irish Baile an Tuaigh, meaning ‘the northern townland’. It is located in County Antrim, Northern Ireland west of Ballycastle and close to Bushmills. The village lies about one kilometre from Ballintoy Harbour.

The village has a charming array of small shops, two churches, including the quaint white Ballintoy Parish Church on the hill above the harbour, as well as tourist accommodation, restaurants, commercial and social facilities.

For those looking to experience Irish rural life, it is an ideal stop while touring the coastal route.

Ballintoy Church is perhaps the most recognisable landmark in the area. It is presumed that the church was built to serve the nearby Ballintoy Castle. The Church came under attack several times during its history and it was rebuilt in 1663.

The original castle was built by the Maelderig family, who were later known as Darragh or Reid. However, in 1625 Randal MacDonnell, 1st Earl of Antrim, leased ‘the old townland called Ballintoy’, including the castle, to Archibald Stewart, who came to north Antrim from the Isle of Bute around 1560.

The castle was developed by the Stewarts, and fortified with a high defensive wall and provided with outbuildings, gardens, a fishpond, and several courtyards.

In 1759, the castle was sold to a Mr Cupples from Belfast for £20,000. It was resold again to Dr. Alexander Fullerton. One of his descendants, Downing Fullerton, pulled down the castle about 1800. The timber and other valuable materials were auctioned. By the 1830s all that survived of this once extensive building was a wall about 65 feet long. The outbuildings had been converted to dwelling houses and outhouses for the farmers who lived on the site.

Also located within the Ballintoy Harbour area is the impressive Bendhu House, a listed building designed by Cornish man, Newton Penprase, in 1936 after he came to Northern Ireland as a young man and taught at the Belfast College of Art. Perched on top of a cliff at Ballintoy, the unconventional design of the building was constructed from materials around him on the coast.

The house was eventually sold to Richard MacCullagh, a retired lecturer, artist and writer and later in 1993 passed to the present owners who have restored the house.

Balintoy Harbour was used as a set for the popular HBO series Game of Thrones to film the exterior shots of the town of Lordsport in the Isle of Pyke and as the Iron Islands in the show’s second season back in 2011.

One of the notable scenes filmed there is when the prodigal son of the Greyjoy family, Theon Greyjoy, arrives back home to the Iron Islands and where he later admires his ship, the Sea Bitch and first meets his sister Yara.

Have you ever visited this stunning Game of Thrones location? Let us know in the comments below.

For more interesting info about Game of Thrones filming locations in Northern Ireland, check out our YouTube Channel and our articles right here at ConnollyCove.com