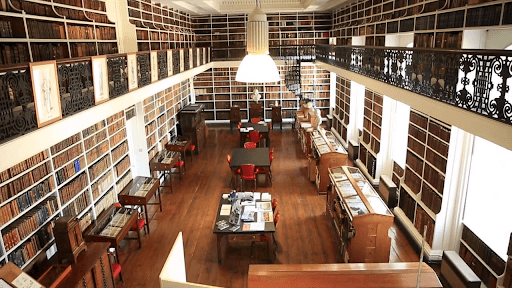 Armagh Robinson Library, previously known as Armagh Public Library, is the oldest library in Northern Ireland. Founded in 1771 by Archbishop Robinson, an Anglo-Irish churchman who came to Ireland as a chaplain (traditionally a representative of a religion attached to a secular institution such as a school, hospital or prison) to the Duke of Dorset in 1751, it was built in a Classical-Georgian style as part of a plan to establish a university in the area.

Archbishop Robinson also oversaw the funding of Armagh’s County Infirmary in 1774, donated land for the building of a new prison in 1780, and founded the Armagh Planetarium and Observatory in 1790, which he hoped to be an integral part of Armagh’s university life.

The library was filled with Archbishop Robinson’s rich personal collection from the 17th and 18th centuries: this included books on theology, philosophy, medicine, history and the law, and journals of voyages and travels.

Hoping to emphasise how important he believed books and access to them to be, Archbishop Robinson had a Greek inscription carved in stone above the library’s entrance, and its message still resonates today: “the healing place of the soul”. It is a short walk from Saint Patrick’s Cathedral, the pride of the city.

Preserver of some of the world’s oldest books

Armagh Robinson Library is home to over 43, 000 books, most dating pre-1800 and providing a fascinating insight into the changing intellectual climate of Europe since 1500.

The Library has a wide array of valuable books in its walls, including incunable (a book, pamphlet or broadside printed in Europe before 1551), first editions, and illuminated manuscripts; these were hand-made books produced in Western Europe between c. 500 – c. 1600 ce., usually on Christian scripture and practice, and were so named because of the manufacturers use of gold and silver to illuminate the texts and illustrations.

Armagh Robinson Library holds more than just books. A registered museum (granted in 2001), it is the home of ancient Irish artefacts such as stone axes, flint arrowheads, and bronze implements, and has a collection of rare coins, medals and gems.

It also houses fantastic resources for amateur family historians, local, national and international scholars. Resources available include clerical documents that can be used to trace ancestry, old maps, and books and other documents relating to Armagh City and the wider County, Irish church history, and Saint Patrick (Armagh is known as the Ecclesiastical capital of Ireland, the city of saints and scholars).

Books previously owned by famous literary figures are also featured in the library. Books belonging to English writer and Anglican cleric John Donne (1572 – 1631), most notable today for his metaphysical poetry, and English playwright and poet Ben Jonson (1572 – 1637), who popularised the comedy of humours through his satirical works, are displayed for the public to view.

The library also preserves the largest known collection of books owned by one of the most important and influential book collectors of the 17th century, 2nd Viscount Edward Conway (1594 – 1655). Conway was an English politician, military commander, and a renowned bibliophile: an individual who loves and often reads books. He was fascinated by English literature, particularly with the works of his contemporaries John Donne, Ben Jonson, Sir John Beaumont, Michael Drayton and Sir John Suckling. Conway’s London library contained over 5,000 volumes and his library at Lisnagarvey (modern Lisburn) in County Antrim contained almost 10,000 books and manuscripts. Many of these are now kept at Armagh Robinson Library.

Perhaps the most precious part of the Armagh Robinson Library’s collection is its valuable Jonathan Swift books and manuscripts. Swift was an Anglo-Irish writer, satirist, essayist, political pamphleteer, poet and cleric. His work was characterised by irony and a deadpan approach, his specific brand of satire termed Swiftian.

Armagh Robinson Library holds a first edition copy of his most famous work Gulliver’s Travels, published by Benjamin Motte in 1726. The library’s copy includes hand-written notes in the margins by Swift himself, who angrily corrected some printing errors that appeared in the first edition (he later had these amended in the second edition). A rare treasure.

Just a short walk from Armagh Robinson Library lies one of the city’s hidden gems: No. 5 Vicar’s Hill. This humble dwelling looks normal and unremarkable from the outside but inside opens into two beautiful octagonal rooms with vaulted ceilings.

No. 5 Vicar’s Hill was built by Archbishop Robinson in 1772 as the Diocesan Registry to hold Church of Ireland and Civic records. It was lovingly restored in 2011 to exhibit the Library’s collection of Roman and Medieval coins, Neolithic stone tools, ancient gems, Christian artefacts, Bronze Age weapons, Irish handbells and a selection of 18th-century fine art. It is also the home of old maps of Armagh which provide an insight into the city’s settlement plans and patterns from 1600 onwards. No. 5 Vicar’s Hill also has a timeline displayed that illustrates the city’s historical journey, including Saint Patrick and the arrival of the Vikings.

This unique space is also child-friendly with interactive touch screens where they can answer quiz questions and explore ancient Armagh, replicas of ancient coins for young visitors to see and hold up close, and activity sheets where they can learn to write their names in Ogham, the earliest form of the Irish language.

Armagh Robinson Library is located in Library House on Abbey Street in Armagh. The opening times are Monday to Friday, from 10am to 1pm and 2pm to 4pm. All admissions are free, but they are very grateful for donations. Vicar’s Hill is also open to the general public but has seasonal opening hours. Winter hours are from the 10th of October to the 31st of March and are Thursday to Saturday each week. Summer hours are from the 1st of April to the 30th of September and are Tuesday to Saturday each week. They are also free admission with donations very welcome. Guided tours are available on request at £2 per person though this must be pre-booked for groups.