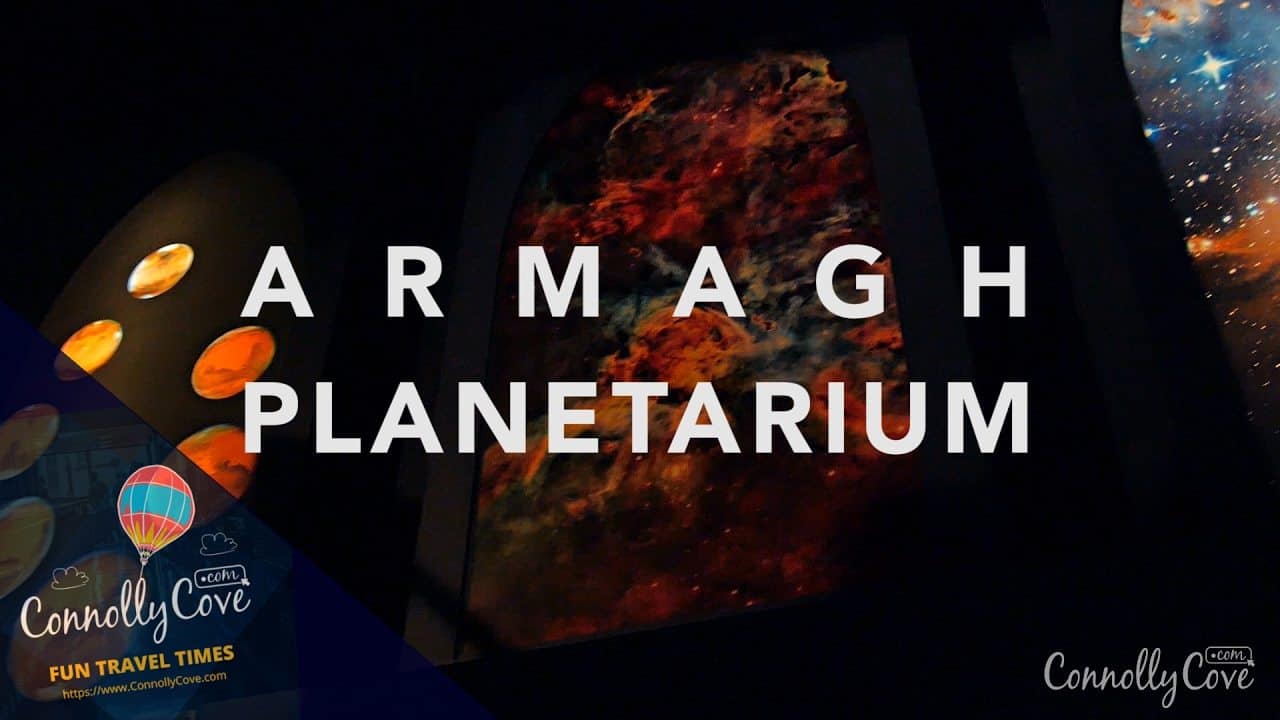 Armagh Planetarium offers a unique magical experience. At the Planetarium’s amazing Digital Theatre you can embark on a journey into our mesmerising space.

Learn about the wonders of the Universe. You can take a trip into the Planetarium’s Mars room or touch the largest meteorite in Ireland, which is 4.6 billion years old. You will explore scale models of probes, such as Viking and Satellites, such as the International Space Station and the Hubble Space Telescope.

The History of Armagh Planetarium

Armagh Planetarium was founded by Dr Eric Mervyn Lindsay, the 7th director of Armagh Observatory, in 1965. He spent 25 years trying to secure funding from local councils and the Ministry of Commerce of Northern Ireland and eventually managed to do so. In the same year in 1965, Patrick Moore was appointed as Director of the Planetarium. His role was to supervise the planetarium’s construction until its official opening on 1 May 1968.

It was open to the public for some months before the official opening. The construction of the Planetarium cost £70,000, including £12,000 dedicated for the planetarium’s first projector, a Goto Mars model made in Japan.

However, that was not the final layout of the Planetarium. Several alterations have been carried out since then. In 1974, the main building was extended to include the Lindsay Hall of Astronomy, named after Dr Eric Lindsay in honour of him. In addition, a dome was built, in which a 16″ (400 mm) reflecting telescope was placed for public use. which is now considered the largest public telescope in Ireland.

In 1994, the interest in Earth Science has been incredibly increasing, which led to the incorporation of a new exhibition hall. Known as the Eartharium. In 1994 the Armagh Astropark was also opened. This is a scale model of the solar system and Universe. It is contained in the grounds of the Armagh Observatory, with size-scaled stainless steel models of the Sun and planets.

In the 1970s, many new technologies were introduced to the Armagh Planetarium by Terence Murtagh. Terence the Director of the Planetarium at the time. Videotape recorders were rare high-end technology at the time. And Murtagh believed that the new technology of video projectors can be tapped to provide special effects to the show. Which would result in dispensing with dozens of slide projectors.

Thus, he saw the possibility of modifying the off-the-shelf video projectors optically and electronically in order to present natural-looking images of celestial bodies on the dome. Until the introduction of computer-controlled laserdisc players technology, the Planetarium kept using videotape players until in the 1980s. The incorporation of this newest high-tech, at the time put the Armagh Planetarium in the lead compared to the other planetaria in the world, since it was the first to project video on its dome.

Not only this, Armagh Planetarium was the first to introduce an electronic audience participation system. Which allowed the audience to control the show displayed themselves. To select from a simple menu interface of any 500,000 images and video clips with explanatory text stored on laserdiscs.

It worked this way: each seat is fitted with a device, a small keypad, which the audience can use to answer some multiple-choice quizzes in the show, to answer a survey regarding their preferences, and to even select the topics of the show. This system was truly impressing to the public and it received wide press and television coverage worldwide.

Influence on Other Planetariums

Armagh Planetarium set an example for other planetaria around the world. Spreading these new innovations to planetaria worldwide. Other interactive computer systems were also added to demonstrate the fundamentals of astronomy. Enabling visitors, for example, to design their own telescope on screen. Then see a simulated view of the Planetarium through it.

Take a Tour Through Armagh Planetarium via our 360-degree video.

Redevelopment of the Planetarium

A major renovation was made at the Armagh Planetarium before its reopening on 31 July 2006 to make the establishment more comfortable and environmentally friendly. This major renovation included improvements, such as the reconstruction of the Digital Theatre to accommodate 94 visitors in air-conditioned comfort.

A new Bose Corporation stereo sound system was installed. As well as an advanced LED lighting suite and a Digistar 3 full-dome video projection system. In an effort to enhance the audience experience. On 7 December 2006, a ceremony was organized and led by Archbishop Robin Eames, in which the Armagh Planetarium building was dedicated to the memory of Eric Lindsay. The Armagh Planetarium is systematically enhanced with the latest technology.

The Man Behind the Construction of Armagh Planetarium

Dr Eric Mervyn Lindsay, a prominent figure with a distinguished career as a full-time astronomer in Ireland, South Africa and the US. He believed in the necessity of having a planetarium that would serve as a complementary to Armagh Observatory. Dr Mervyn first proposed the idea of building Armagh Planetarium in 1943.

He started fundraising for the project, as Director of Armagh Observatory, and spent 25 years trying to secure this funding throughout the 1950s from local councils and the Ministry of Commerce of Northern Ireland. In 1964, after presenting the Planetarium project as a centre for education and tourism, he finally managed to persuade these institutions to fund the establishment of the Planetarium.

The Armagh Astropark is a scale model of the Universe, opened in 1994. Astropark is located in the grounds of Armagh Observatory and Armagh Planetarium. Along with a Nature Trail and a Weather Station.

At this beautiful natural setting, you will discover some of the amazing phenomena in the Solar System, the Milky Way, and beyond. You can also take a virtual tour around it, or pay a visit to its unique features. The Solar System, the Hyper-Cube, the Hill of Infinity and the Stone Calendar. The Astropark grounds are landscaped and dotted with stainless steel scale models of the planets.

Armagh Planetarium in the New Millennium

Armagh science communicators travelled throughout Ireland and other destinations as far as Nigeria. To present StarDome shows and conduct workshops. StarDome shows were not the only shows displayed. The shows extended to cover other topics, such as magnetism, dinosaurs, electricity and rockets and proved very popular among audiences. Over 100,000 people enjoyed the shows presented by the Armagh Planetarium education team.

Instead of having a giant projector in the centre of the Digital Theatre at Armagh Planetarium, the Digistar 3 uses a bank of six video projectors which display the images on the Theatre’s hemispherical ceiling, presenting a night sky with outstanding accuracy. With Digistar 3, visitors can travel to anywhere in the entire Universe. Planets, stars, galaxies and asteroids can be viewed in full detail as though they are just over your heads. Unparalleled scenes are displayed in the Digital Theatre via the Digistar 3 Projection System.

Armagh Planetarium has always enjoyed a prominent international status. Accordingly, Nasa loaned the Planetarium invaluable items from its archives. Such as an Apollo spacesuit and some astronaut’s clothes worn on the Skylab space station.

The most valuable item of them all is a fragment of moon rock. This rock was collected by astronaut Eugene Cernan from the Taurus-Littrow valley. Here’s the fun part, visitors can try on the spacesuit’s helmet and gloves.

According to www.armaghplanet.com, here are some facts about Armagh Planetarium:

For more information on shows and showtimes, go to www.armaghplanet.com

Have you ever visited the Armagh Planetarium? Let us know your experience in the comments below.

Don’t forget to check out other places and attractions in Northern Ireland that might interest you: Armagh County Museum | Armagh – The Ecclesiastical Capital | Armagh’s Cathedral | Rostrevor County Down | Exploring Carrickfergus Museum | Navan Centre and Fort