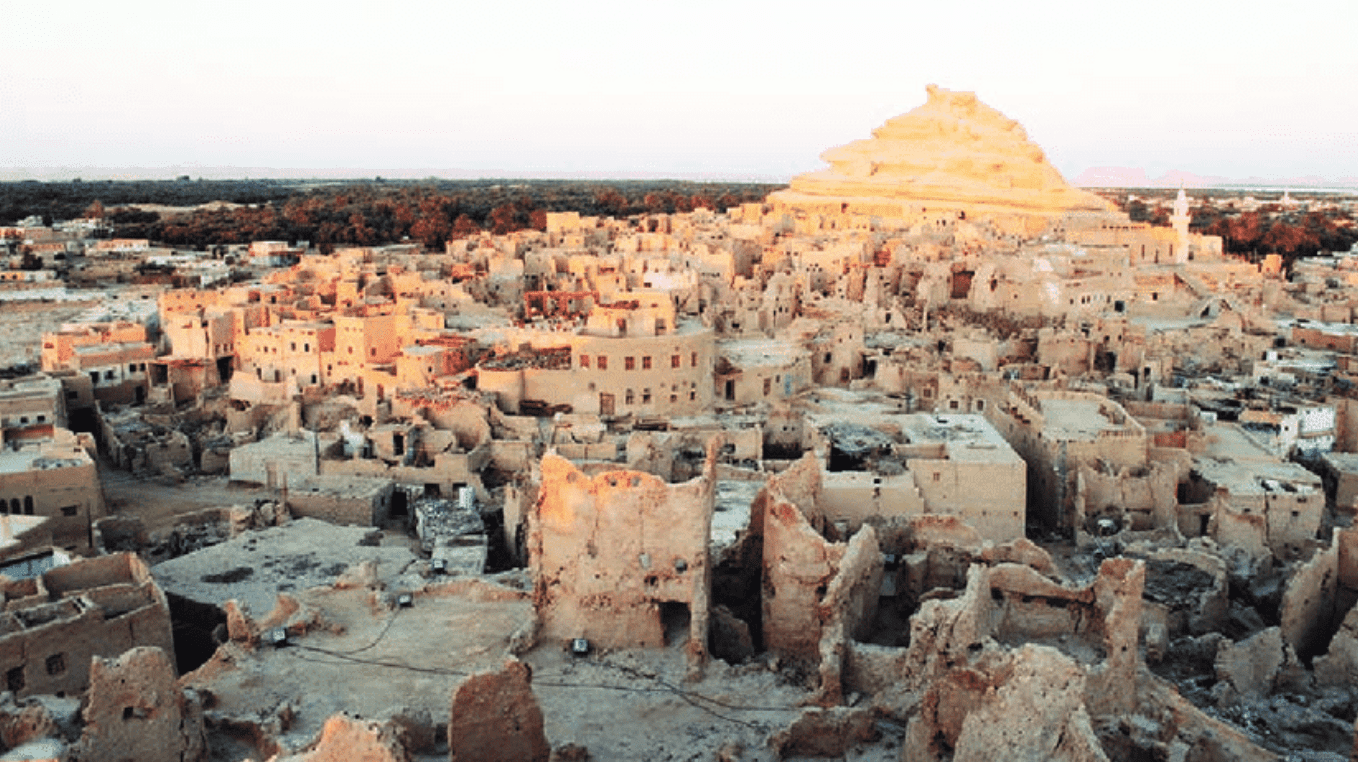 Siwa oasis is located in the western desert of Egypt, and it is considered one of the most important and famous oases in the world and one of the favorite destinations for tourists in the winter months. It is a heritage and entertainment distention too for tourists from all over the world. Siwa Oasis contains historical and cultural monuments, as well as lakes and natural springs.

Siwa Oasis is located about 600 km from the capital Cairo and it is 10 km long and 8 km wide and it also contains 200 springs. The oasis’ old name was Sekht-am meaning the palm land, for the numerous palm trees that grow there, as well as olives and other fruit trees and aromatic plants. Siwa also has about 11 tribes, some descending from the Amazigh and others are of Arab origins. The local inhabitants of Siwa actually speak their own language, which is more like the language spoken by the Berber and not like the people who live in other parts of Egypt who speak Arabic.

There are a lot of attractions in Siwa Oasis that you would love to see and enjoy spending time there whether with family or friends, so let us know more about these magnificent places in Siwa Oasis.

Things to do in Siwa Oasis:

1. Mountain of the Dead:

This place is one of the most important landmarks to visit in Siwa Oasis which contains a huge amount of Egyptian antiquities from different eras, Roman, Greek, and Pharaonic. The Mountain of the Dead was discovered during World War II in 1944 that was when many residents moved to hide in these cemeteries because of the air raids during the war. The mountain is characterized by its shape and by its calcareous soil and it contains thousands of graves carved in the rock in the form of a beehive of stone.

The tombs are divided into three levels, the lower level, and the middle level, which contain most of the tombs due to their size, and the top of the mountain contains the least number of tombs. The tombs that are located there are mostly carved in the Greco-Roman style, where you will see the entrance then there is a hall with a burial chamber at the end.

Many of the tombs there are some of the most important tombs in the western desert of Egypt that date back to the Pharaonic era, including the Tomb of Isis, Si Amon, and that tomb belonged to one of the families of the wealthy Greeks who used to follow the ancient Egyptian religion and there is also the tomb of Batoth, which belonged to the 26th dynasty that extends to the Ptolemaic and Roman eras.

Siwa Oasis has more than 200 natural springs from which water flows all the time, that is used for irrigation, drinking, treatment, and bottling mineral water bottles that are sold all over Egypt and it is also called the Eye of the Sun. The ancient Greek historian Herodotus described that place and said that Queen Cleopatra swam there during her visit to Siwa Oasis and that Alexander the Great visited Siwa on his trip to the Temple of Amun in the Siwa Oasis.

It is surrounded by a fence to preserve the eye from backfilling due to environmental factors. It is also considered the source of water for more than 840 square kilometers of gardens, orchards, and palm trees in the Siwa Oasis. The water in the eye is pure and clear, it is also warm in winter and cold in summer. There is an annual tradition that is carried out where the locals meet at a certain time to clean and purify the springs of the whole oasis, especially Cleopatra Eye as it is a part of their heritage and history that must be preserved.

The Temple of Amun is located 4 km east of the city of Siwa. It is also known as the Temple of Revelation and the Temple of Alexander. The temple was built in the era of the 26th Dynasty, and the inscriptions show that the temple was constructed by King Ahmose II to spread the religion of Amun among the neighboring tribes and peoples as this place was a meeting point for trade routes between South, north, west, and east of the Sahara. The temple consists of three parts; the main temple, the palace of the ruler, and the ward of the guards, and also has the holy hole that was used in washing and purification in order to consult the revelation.

The Macedonian leader Alexander the Great visited the temple after his conquest of Egypt in 331 BC and was crowned as one of the gods of Egypt after he received the priest’s prophecy. The temple was also related to many legends. One of these famous legends was about the lost army of Cambyses which was sent by the Persian king Cambyses in 525 BC to demolish the temple, in order to prove to the Egyptians and Greeks the corruption of their beliefs associated with the temple, but the strangest thing is which remains a mystery to this day is that the army of Cambyses was completely lost after heading towards the oasis of Siwa.

There is also an astronomical phenomenon that happens in the temple like Abu Simbel Temple in Aswan and Karnak Temple in Luxor, which is where the sun rays fall perpendicularly on the temple twice a year, in the spring equinox and the autumn equinox and where night and day are equal after 90 days of the shortest day of the year, and ninety days after the longest day of the year. The Temple of Amun includes a mosque, a minaret, rooms for the priests of the Pharaohs, corridors, and a hall built to receive Alexander and hold his coronation, a well of holy water, and Roman walls.

It is one of the most important places for medical tourism, as the sands of the mountain are reported to have the ability to treat rheumatism, skin diseases, joint pain, spine pain, gout, and much more, and it is located 3 km southeast of Siwa. The best time for anyone to visit the area is in June, July, August, and September when the weather and sand are hot and that makes it capable of treating many diseases. At Dakrur Mountain, there are two tombs with six pillars cut in the Greek era and all the tombs are devoid of any inscriptions on their walls. There are many legends about this mountain and about the treasures of king Ebrak who was the King of Siwa in the old days.

Many studies have been carried out on the sands in Siwa and it was proven that it has a great ability to treat many illnesses. Many people who suffer from various illnesses go there to be half-buried in the sand in the early morning wearing short pants of light fabric and covered with hot sand and a hat is placed on their head to protect them from sunstroke. The person stays in the pit for a period ranging between 10 minutes and 15 minutes and if they can bear the hot sand, it could be repeated from 3 to 7 days depending on the type of disease. After that, the person is wrapped when he comes out of the hole with a wool blanket and enters one of the tents and takes a hot drink, and rubs his body with olive oil.

Shali Castle is one of the most important historical castles in the oasis. It is located in the center of the Siwa Oasis and it was built in the 12th century in order to repel the attacks of Arabs and traveling tribes in the desert. There were a lot of turbulent times in this place at the time of the Roman Empire that made the people who lived in Siwa to build a high fortress to protect it from the invaders.

When things in Egypt were stable in the era of Muhammad Ali Pasha, the people of Siwa didn’t need to be living in that place anymore and they started building their homes in the wider areas surrounding the oasis.

Another beautiful spot located in Siwa Oasis is Fatnas Island which is located 5 km away from Siwa and it will take about half an hour to reach this place. The island is also known as the oasis of the sunset. When you visit Fatnas Island, you will love the beauty that surrounds you like palm trees that produce dates and it is known for its unique taste.

When you are there, you will be able to see the wonderful sunset; also you can have a dinner of delicious local food from Siwa and hearing the lovely Siwa songs with a magnificent view of the landscapes. Inside the island, you will find a spring called Ain Fatnas and it is different because it is the most beautiful spring in Siwa and it is surrounded by trees and palm trees and includes 10 sources from which water comes out and its depth reaches about 7 meters.

7. Safari in the Dessert of Siwa:

A lovely activity that you can do in Siwa, and many tourists from all around the world enjoy the safari in Siwa and it is organized in the Great Sea of Sand, south of Siwa. It starts with a ride in a four-wheeled car through the desert and sand, with supplies of firewood, water, food, and drinks, and everything you might need on the trip.

The drivers make sure to drive at great speeds on the tops of mountains and hills and amid the sand. The first stop is standing inside the Sea of Sand to take some pictures there, then they go to one of the high-altitude locations and cars park in front of it, and then they bring out the wood for tourists to sit on and slide on the sand from top to a distance of up to 300 meters and the skiing continues for an hour. After that, the tea is prepared on firewood in the sea of ​​sand and with an added flavor from olive trees which give a beautiful flavor to the tea.

At the end of the day, you can go to the hot springs and the cold lake to watch the sunset in the middle of the desert in the sea of sand and take some pictures surrounded by the beauty of the desert and after that, you can go back to Siwa after spending a great day full of activities in the desert.

It is made up of three well-known springs, but only two of them are the most visited. It is inside a natural reserve area that stretches 800 km long. The temperature of Bir Wahed reaches the maximum of 37 degrees Celsius as if it is a sauna or thermal complex and it is one underground spring that is effective in treating any number of skin diseases. Bir Wahed is a Sulfur hot water spring in the dunes in the Great Sand Sea and located about 15 kilometers from Siwa.

These were the most magnificent and important places that you can visit and enjoy your time in Siwa, where you will love the oasis and all the nature surrounding you. Now, start your journey in the beautiful Siwa Oasis and have a great vacation in this small desert city.