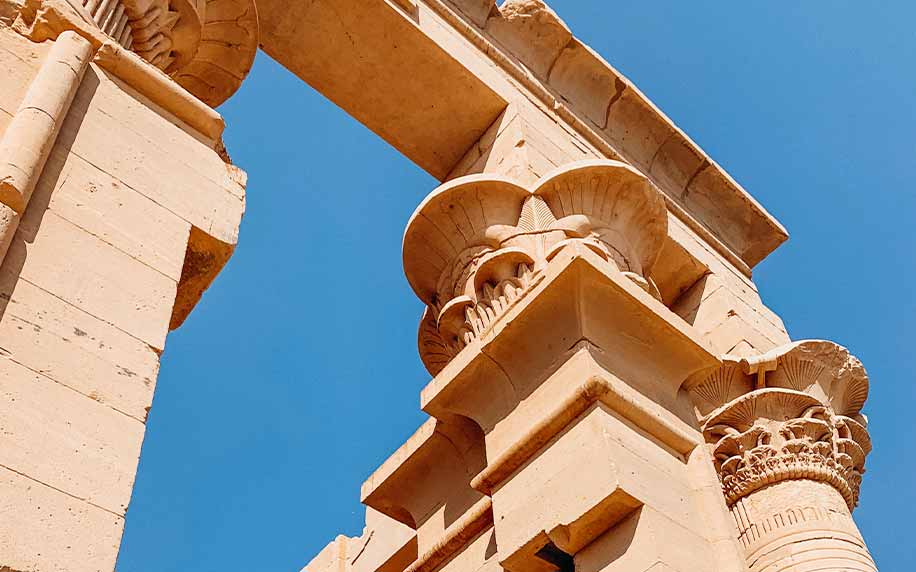 Philae Island is located in the middle of the Nile in Aswan, Egypt, with an area of 76,000 meters and it is 4 kilometres away from the Aswan barrage. The island where the Philae Temple is the Egyptian gateway to the African continent, a link between Egypt and Sudan and it is made up of a group of pink granite rocks.

The Temple of Philae is a beautiful place to visit in Aswan, there, besides the archaeological aspects, you will see many trees, roses, and palm trees bearing fruits. Also, visitors will love the dry climate due to its location on the eastern bank of the Nile, which made it one of the most important promenades in the south.

The History of the Philae Temple

Philae Temple was built in the 3rd century BC. It was dedicated to the worship of the goddess Isis. After that, the temples of Amenhotep and Arsenovis were built, and then the Temple of Hathor which was considered the last monument of Ptolemy and was completed before 116 BC by Eurogates II. The interesting thing about Philae Island is that it bears the characteristics of three civilizations: the Pharaonic era and the Greek and Roman periods and there are many monuments and architectural treasures on the island to prove it. The island also was considered an example of the fusion of ancient Egyptian religions, due to including monuments from the Christian era and you can also find the last text written in Hieroglyphic script from 394 AD. It was believed that the Nubian Pharaoh Taharqa of the 25th Dynasty was the first one to build on this island. Nubians worshipped some deities of their own, but they largely followed the same Egyptian religion.

The word Philae is also derived from the Greek word ‘velay’ meaning beloved and has been known in Arabic literature as Anas al-Wujud due to its association with folklore stories.

The island includes a group of temples, the most outstanding of which is Hathor and Amenhotep, historically devoted to the worship of the gods Isis, and built by King Nakhtenbo in the first half of the fourth century BC.

After the advent of Christianity to Egypt, the temple was closed and some of its chambers were converted for use in Christian worship and this is evidenced by the presence of crosses on the columns, altars, and engravings in the different rooms, as well as the imagery on the external wall of the place.

What Does the Philae Island Consist of:

The Temple of Isis is considered the main temple on the island. It was discovered in 1871 while constructing the railway line and it was found in good condition as the temple still stands tall with its four walls and its roof with granite panels. The length of the temple is 19 meters, its width 15 meters, and the ceiling height is 7 meters. It is a quarter of the island’s area and it was built by King Ptolemy III in the place of another smaller temple that was also dedicated to Isis and to the soldiers assigned to protect the southern borders of Egypt. Many Ptolemaic kings contributed to building the temple.

Inside is a hall that includes 3 rooms and in the eastern wall of the middle room is the Holy of Holies and inscriptions of offerings to the gods, and the temple has a main door topped by an ornament and a winged sun disk, and a side door to enter and exit Al-Kaana, and around it are mud-brick buildings used as barracks for Roman soldiers which shows that the temple has been continually used over the centuries.

This is the place where you start your journey through the temple, where you will be led into the main area and you will see two towers and a central doorway which is 18 meters high that is decorated with reliefs by Nectanebo. Then, you can enter a tower located to the west of the entrance with inscriptions by King Philometor and that will lead you to the Birth House. You will also see two granite obelisks erected by Euergetes II and two granite lions in front of the pylon. There is a gateway that has reliefs by Ptolemy II and Emperor Tiberius. On the east tower, you will be able to see a huge relief depicting Ptolemy XII grabbing his enemies by the hair and raising his club to smite them, with Isis, Horus, and Hathor.

The inner entryway section leads to the inner sanctum of the temple with a doorway of 32 meters wide and 12 meters high and the reliefs on the central doorway are by King Euergetes II. There was a small church built in front of the doorway and you will see faded early Christian paintings and in the lower part of the doorway, you can see a relief of a person dedicating the slaughtered sacrificial animals to Horus and Hathor. Also, another inscription that you will see on the walls is that of the king presenting a garland to Horus and Nephthys and also inscriptions of offerings of incense to Osiris, Isis, and Horus.

4. The Courtyard of the Temple:

When you are in the courtyard, you will see on both sides structures fronted by colonnades. There is also a small building to the east which contains rooms for the priests. On the west side of the courtyard, there is the Birth House, which was dedicated to Isis in honor of the birth of her son Horus and the Birth House is surrounded by colonnades and inside, you will see inscriptions that describe scenes from the childhood of Horus. Most of the inscriptions on the walls and columns are made by Euergetes II, Neos Dionysos, Augustus, and Tiberius. Also, you will find a French inscription that memorializes Napoleon’s campaign and the pursuit of the Mamluks by General Desaix in 1799.

5. The Passageway to the Inner Part of the Temple:

As soon as you enter the passageway, you will find eight columns in the first room of the inner temple, where you will see the Coptic crosses and Greek inscriptions on the walls that show how the temple was converted into a Christian place of worship during the early Byzantine age under the Coptic Bishop Theodore.

Most of the inscriptions are now ruined, but you can still see some of them on the door in the south wall where Horus is depicted seated on a bench with Nephthys and Isis introducing the crowns of Lower and Upper Egypt, as well as an inscription that describes the tomb of Osiris at Abaton, with the body of Osiris borne by a crocodile.

On your left, unfinished inscriptions depict the king making grants of land, and above it are three lines in Meroitic cursive script. There is also a famous inscription that depicts the god of the Nile, with a snake entwined around his body, pouring water from two jars under a rocky crag on which a vulture and a falcon are perched.

The gateway of Hadrian is located northwest of the Second Pylon. It was built during the era of Emperor Hadrian and was decorated by many kings like Hadrian, Marcus Aurelius, and Lucius Verus. Before entering the gateway, you will see inscriptions showing Hadrian making offerings to Osiris, Isis, and Harsiesis and Osiris, Nephthys, and Harendotes. Inside the gateway, inscriptions depict Marcus Aurelius in the presence of Osiris and Isis, and also Marcus Aurelius making offerings of food, including grapes, and flowers to Isis.

The Temple of Hathor is a small temple located 50 meters east of the Temple of Isis and it was built by Philometor and Euergetes II in honour of Hathor. After building the temple, the vestibule and the sanctuary were built by King Augustus but now they are destroyed. When you enter the Temple of Hathor, you will see the main temple chamber and in front of it, there are two plant columns linked to the walls. The columns of the corridor are decorated with lovely inscriptions of flute players and harpists and the god Bes dancing and playing the harp.

On the north side of the Philae Island, you will find Imhotep Temple that was built in the Ptolemaic period to worship Imhotep, a former chancellor to the Pharaoh Djoser and a high priest for the sun god Ra. Years after his death, the legends surrounding Imhotep and his life grew and he was gradually elevated to the level of a deity.

The Kiosk of Trajan, one of Rome’s most powerful emperors, is located southeast of the Temple of Hathor. It was built in the Roman Imperial period but it was left unfinished. The Kiosk of Trajan consists of 14 pillars, the roof was made of wood but through the years it disappeared. During Trajan’s reign, it was the main entrance of the temple of Philae.

Other Interesting Locations on the Island

There are many things you can find and explore on the island. There is a small open-air museum consisting of Philae Temple’s oldest blocks that are located in the northeastern corner of the island of Agilkia.

In the southern part of the island, there are the ruins of a temple dedicated to Mandulis, a local Nubian deity, and the remnants of a Nilometer, a structure used to measure the fluctuating heights of the river. There is a small gate that was built by Hadrian and besides that a ruined Horus temple.

After building the Aswan Dam, the water of the Nile began to creep slowly into the temple. It was like a battle of life and death for the country to save the temple from drowning. This remained a problem for years and the water didn’t recede except after two or three months.

Then the Egyptian Government decided to build the High Dam, which created a huge problem for the Philae Temple and could have drowned it forever. This motivated the government to move quickly to save the Philae Temple and other historical landmarks nearby, in cooperation with UNESCO and other countries, a committee was formed that included 12 experts who met in April 1968.

The experts studied the situation and recommended a detailed study to move the temples from their place to another nearby island, 600 meters away, called Agelica. The nearby island is more than 60 meters high, which was important to avoid the water level, and the cost of doing all that was about 5.9 million pounds.

The operation to rescue the Philae Temple began on March 13, 1971. The Philae Temple was dismantled to 40 thousand stone blocks and they were numbered for reinstallation in the same old form with the use of the latest scientific methods in restoration, on the island of Agelica.

The island has an area of ​​13 thousand meters, and the temple floor was preserved and was the same as it was on the old island. They also planted the same type of trees that was planted on the old island, the island of Agelica was settled by blasting its rocks with dynamite, and then it became an island and it opened in its new location on April 4, 1980.

Sound and Light Shows at the Philae Temple:

This is one of the amazing things that you can do when you visit Philae Temple, the show is always at night and is presented in English, French, German, Chinese, and Spanish. It is a great experience to watch while there as you visit the temple and it adds a completely different dimension to your journey. The show will let you know more about the ancient Egyptians and especially more about Philae Temple and Isis.

The Philae Temple is one of the marvels created during the ancient Egyptian civilization and it is a must-visit for anyone intending to visit Aswan.