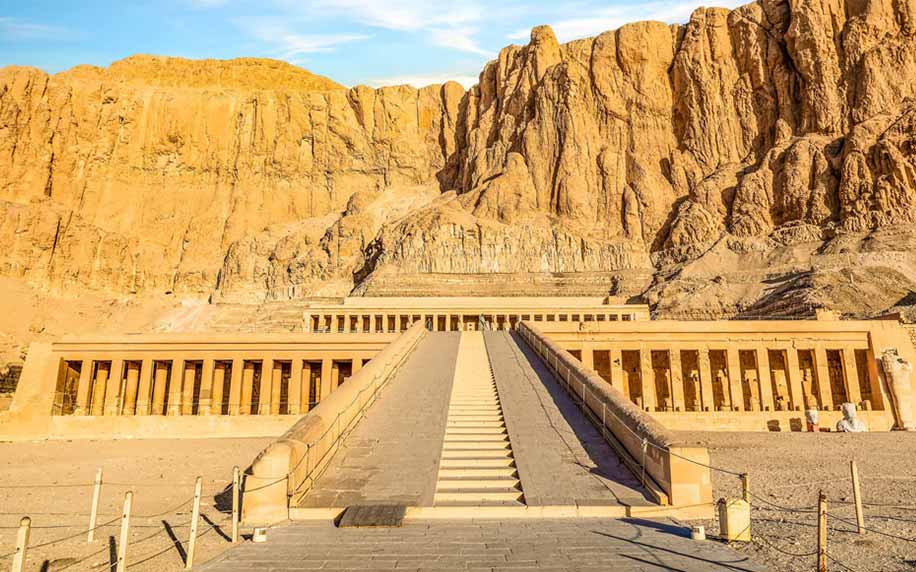 The Temple of Queen Hatshepsut is one of the greatest discoveries in Egypt that many tourists from all over the world come to Egypt to visit. It was built by Queen Hatshepsut about 3000 years ago. The temple is located in El Der El Bahary in Luxor. Queen Hatshepsut was the first female to rule Egypt and during her reign, the country prospered and advanced. The Temple was sacred to the goddess Hathor and was the site of the earlier mortuary temple and tomb of King Nebhepetre Mentuhotep.

The History of the Queen Hatshepsut Temple

Queen Hatshepsut was the daughter of Pharaoh King Thutmose I. She ruled Egypt from 1503 BC until 1482 BC. She faced many problems at the beginning of her reign because it was thought that she killed her husband to seize power.

The Temple was designed by the architect Senenmut, who was buried under the temple, and what distinguishes this temple from the rest of the Egyptian temples is its distinctive and different architectural design.

Through the centuries, the Temple was vandalized by many Pharaonic kings, like Tuthmosis III who removed his stepmother’s name, Akhenaten who removed all references to Amun, and the early Christians turned it into a monastery and defaced the pagan reliefs.

The Temple of Queen Hatshepsut consists of three consecutive floors built entirely of limestone in front of the second-floor columns are limestone statues of the god Osiris and Queen Hatshepsut and these statues were originally coloured but there is little left of the colours now.

There are many inscriptions on the temple’s walls of marine journeys sent by Queen Hatshepsut to the country of Punt for trade and to bring incense, as it a tradition at that time for them to present incense to the gods to gain their approval and all that has been depicted in paintings on their temples showing them making offerings and incense to various gods.

Queen Hatshepsut was interested in building temples, believing that the temples were paradise for the god Amun in the old Egyptian civilization and she also constructed other temples for other gods where the shrines of Hathor and Anubis were found, to make it a funeral temple for her and her parents.

It was believed that the reason why Queen Hatshepsut built many temples was to assure the members of the royal family of her entitlement to the throne and due to the religious conflicts as a result of the Akhenaten revolution.

Hatshepsut Temple from the Inside

During its time, the temple was different from how it looks now, where many archaeological monuments were destroyed due to the passage of time, erosion factors, and climate. There were statues of rams lining a pathway that led to the temple and a big gate in front of two trees inside a very luxurious fence. These trees were considered sacred in the Egyptian Pharaonic religion. There were also many palm trees and the ancient pharaonic papyrus plants but unfortunately, they were destroyed.

On the western side of the temple, you will find iwans roofed on two rows of huge columns. On the north side, the iwans are worn out but there are still some remains of Pharaonic inscriptions and engravings of bird hunting and other activities they did.

On the southern side, the iwans contain clear Pharaonic inscriptions until these days. In the courtyard, there are 22 square columns, beside that you will see 4 columns next to the northern iwan. It was the place of giving birth in the temple. To the south, you will find the temple of Hathor opposite the temple of Anubis.

In the temple of Queen Hatshepsut, there is the main structure chamber, where you will see two square columns. Two doors direct you to four small structures, and on the ceiling and walls, you will see some drawings and inscriptions that represent the stars in the sky in unique colours and Queen Hatshepsut and King Thames III as they present offerings to Hathor.

From the central courtyard, you can reach the third floor, there, you will see the tomb of Queen Nefro. Her tomb was discovered in 1924 or 1925. In the upper courtyard of the temple of Queen Hatshepsut, there are 22 columns and also statues of Queen Hatshepsut that were assigned in the form of Osiris but when King Tuthmosis III was in control he converted them into square columns. There was a row of 16 columns but most of them were destroyed, but some remain today.

Another room is dedicated to the god Amun-Ra and inside, you will find the engravings of Queen Hatshepsut giving offerings to Amun Min and Amun Ra. One of the interesting archaeological discoveries in the area of the temple was a large group of royal mummies uncovered in 1881 and a few years later a huge grave containing 163 mummies of priests was also discovered. Also, another tomb was discovered of Queen Merit Amun, daughter of King Tahtmos III and Queen Merit Ra.

It is located in the north end of the Hatshepsut Temple on the second level. Anubis was the god of embalming and the cemetery, he was frequently represented with the body of a man and the head of a jackal resting on a small plinth. He faces a heap of offerings that reaches eight levels from the bottom to the top.

Hathor was the guardian of the area of El Deir el-Bahri. When you enter, you will see columns that fill the court of this chapel, like a sistrum, a harmony instrument associated with the goddess of love and music. The top of the column looks like a female head with cow ears topped with a crown. The curved sides ending in spirals are perhaps suggestive of cow horns. The chapel is located at the south end of the second level of the temple and since Hathor was the guardian of that area so it was appropriate to find a chapel devoted to her inside Hatshepsut’s mortuary temple.

This is one of the famous statues located in Hatshepsut’s mortuary temple. Osiris was the Egyptian god of resurrection, fertility, and the other world. He is depicted holding a crook and flail as sceptres as symbols of his control over nature. The Osiride statue has the exact features of Hatshepsut, the female pharaoh; you will see the statue wearing the Double Crown of Egypt and a false beard with a curved tip.

This is one of the most beautiful phenomena that happens when the sun’s rays at sunrise hit the temple at a certain angle on the holy of holies and it happens twice a year on the 6th of January, where the Ancient Egyptians celebrated the feast of Hathor, the symbol of love and giving, and on the 9th of December, where they celebrated the feast of Horus, the symbol of royal legitimacy and supremacy.

This proves how ingenious the ancient Egyptians were and their progress in science and architecture. The reason why most of the temples in Egypt have this phenomenon is that the ancient Egyptians believed that these two days represent the emergence of the light from the darkness which represents the beginning of the formation of the world.

Restoration Work on the Temple of Queen Hatshepsut

The restoration in the temple of Queen Hatshepsut took about 40 years, s the inscriptions were exposed to obliteration for many years. The restoration work began in 1960 with the efforts of the joint Egyptian-Polish mission and the target was to uncover other inscriptions of Queen Hatshepsut, which were previously removed by King Thutmose III from the temple walls because he believed that Hatshepsut had usurped the throne through imposed guardianship on him at a young age after the death of his father, King Tuthmosis II and that a woman had no right to assume the throne of the country. Some inscriptions were revealed referring to Hatshepsut’s trip to Somaliland, from which she brought gold, statues, and incense.

The Temple of Queen Hatshepsut is open every day from 10:00 am to 5:00 pm and the ticket price is $10.
We recommend that you visit the temple early in the morning to avoid the large crowds.