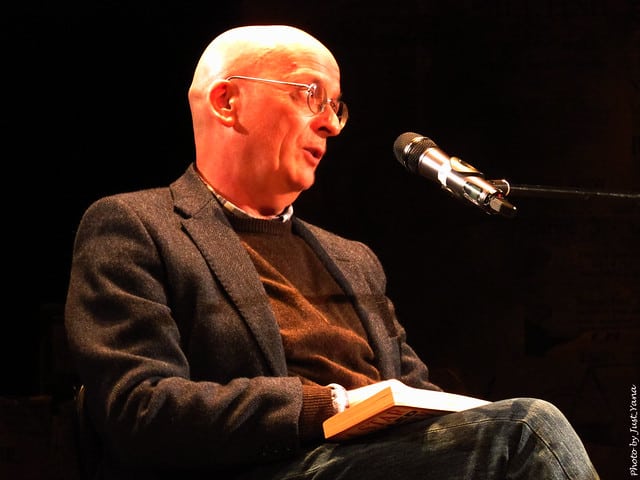 An Irish Novelist, Teacher and Screenwriter.. continue reading to explore the life and work of famous Irish writer Roddy Doyle.

Born in Dublin, Ireland, on the 8th May 1958. He was raised in Kilbarrack and attended Trinity College Dublin, educated by the Christian Brothers. He then graduated with a Bachelor of Arts Degree.

After university, he became an English and Geography teacher in 1980. He then found his true calling and became a full-time writer in 1993. He married Belinda Moller in 1987 and had three children: Rory, Jack and Kate. His wife, Belinda, is the granddaughter of former Irish President Erskine Childers.

In 2009, Roddy Doyle created Fighting Words, he is the co-founder and chairperson. The main aim of this organisation is to help children, young adults and adults to read and write, who do not have the opportunity of growing up.

The hope is to use the creativity of literature to teach young people, of all backgrounds, to be creative and help them become successful adults.

The first story Roddy Doyle wrote, “Your Granny is a Hunger Striker” was never published. Due to this, his work colleague, Paul Mercier, became a sort of mentor. Paul Mercier was also a writer, he wrote about working-class Dublin.

This pushed Doyle to then write about his homeplace. Leading to him writing “The Commitments” in 1986. The theme of Dublin and his homeplace continued to be the topic for his writing.

The Barrytown Trilogy comprised of “The Commitments”, “The Snapper” and “The Van”. Leading to movie success and “The Van” was shortlisted for the 1991 Booker Prize.

In 1993, “Paddy Clarke Ha Ha Ha” was published, winning the 1993 Booker Prize. This novel was about the understanding, and misunderstanding, of the world by a ten-year-old Dubliner in 1968.

“It was a sign of growing up, when the dark made no more difference to you than the day”

Roddy Doyle’s next novel deals with a much darker theme, domestic violence. Entitled “The Woman Who Walked into Doors”, published in 1996. The storyline, about a woman whose husband beat her, and defending him by using the excuse that she walked into a door. This story returns in his novel “Paula Spencer” in 2006.

“He loved me and he beat me. I loved him and I took it. It’s as simple as that, and as stupid and complicated. It’s terrible. It’s like knowing someone you love is dead but not having the body to prove it. He loved me. I know it.”

Roddy Doyle’s most recent trilogy is entitled “The Last Roundup”. This trilogy follows an IRA volunteer through his life: fighting in the Easter Rebellion, moving to America and finally returning to Ireland and finding himself involved in the IRA again.

Along with these novels aimed at an adult audience, Roddy Doyle made much success from writing children’s books. Arguably his most well-known children’s novels being the “Rover Adventures”, including “The Giggler Treatment”, “Rover Saves Christmas” and “The Meanwhile Adventures”.

Roddy Doyle has also become an established playwright. His first published novel “The Commitments” ended up being performed in the West End as a musical in 2013. More of his plays include: “Brownbread”, “War” and “The Woman Who Walked into Doors” (novel written in 1996, performed in theatre in 2003). Roddy Doyle also adapted John Millington Synge’s “Playboy of the Western World”.

Roddy Doyle is a member of the Royal Society of Literature and has won many awards for his work:

If you enjoyed this blog post about the life and work of Roddy Doyle, read more of our Connolly Cove articles about Irish writers:

Discover Ireland: The Glens of Antrim